The first time I saw a Tony Conrad movie, it left me stumbling like a drunk on the sidewalks of the Lower East Side. I was in NYC for a theater festival and saw that Anthology Archives was doing a double feature of Tony Conrad’s “The Flicker” w/ Ken Jacob’s “Blonde Cobra”. Not really knowing anything about either man at the time, I went to see it to kill some time and was blown away by the hallucination-inducing strobe effects of “The Flicker”. It was the first time I had ever seen a movie that made me feel like I was taking drugs. The flickering lights onscreen stretched my senses and brain like taffy, and I spent the next two hours after the show tripping over my own shadow, lurching around town like a lush riding on the back of a baby pink elephant. After the effects wore off, I wondered what kind of glorious lunatic would make a movie like that. 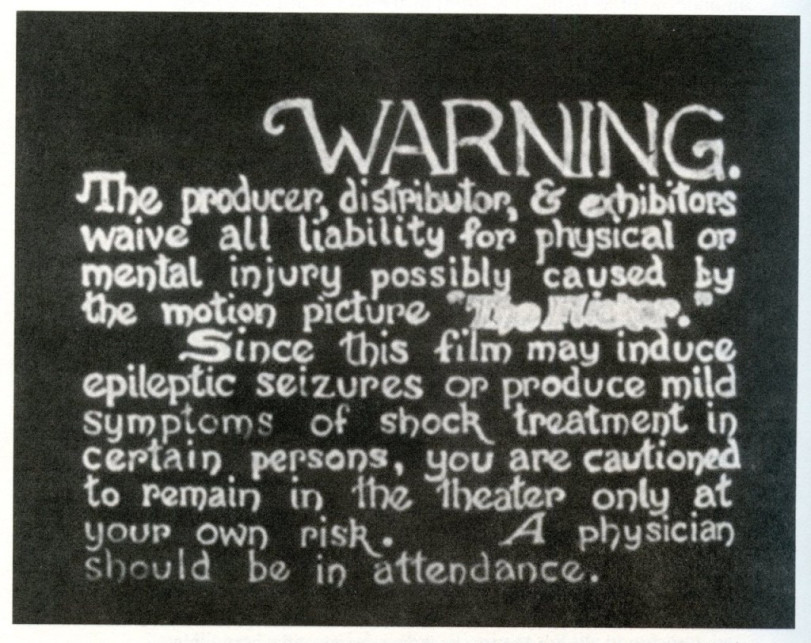 Almost a decade after seeing “The Flicker”, I’m stumbling around like a drunk yet again. But this time I’m doing it on Tucson sidewalks, and I’m lurching because my legs feel like wet ropes after a few hours of walking and standing around in the 2016 All Souls Procession. I pass by a building near 191 Toole with barred windows covered in rebar; A wooden sign reads “MICROCINEMA” over it. And posted on the door is a flier for a Tony Conrad tribute night! 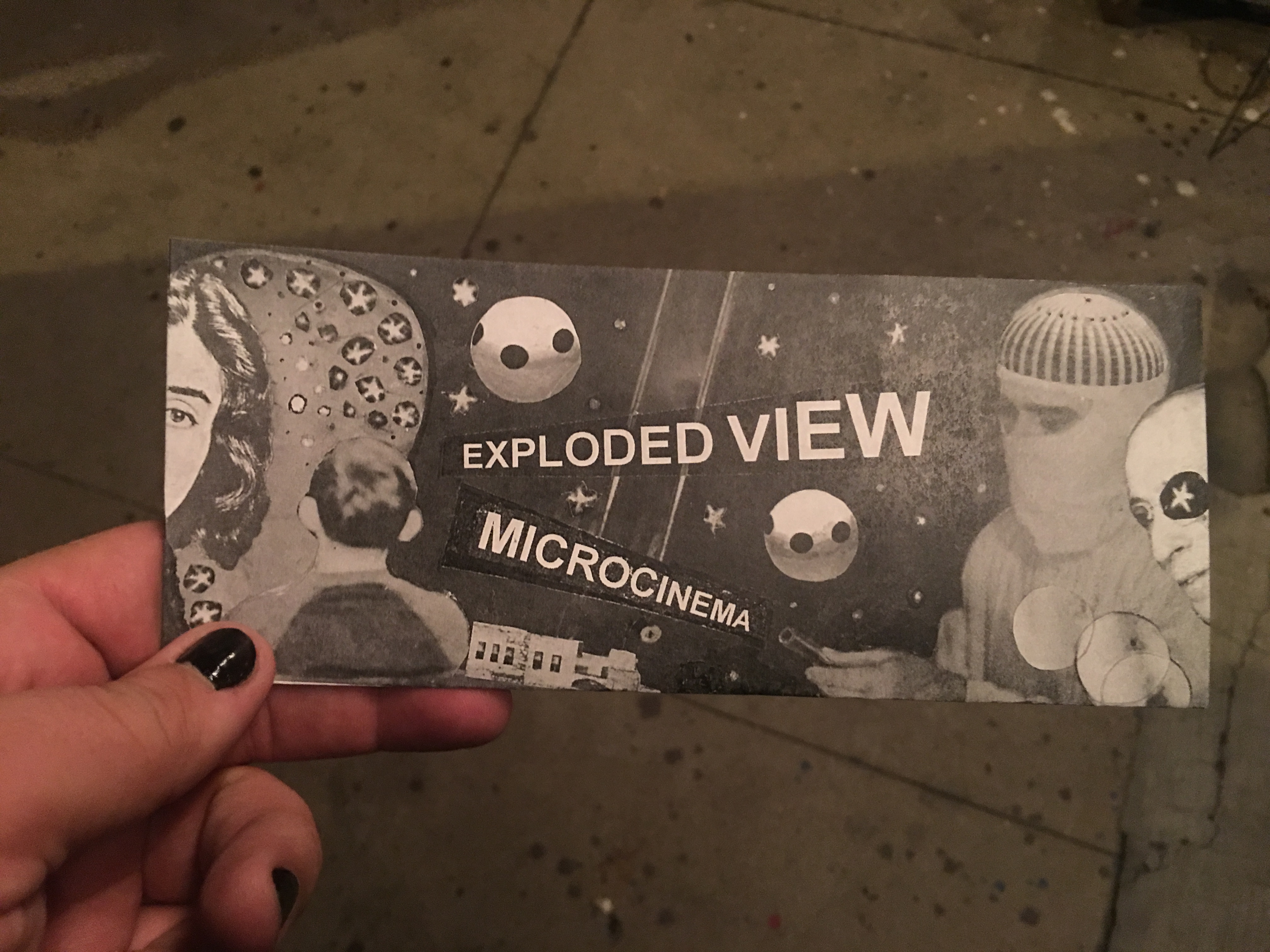 I drove back down to Tucson last night to catch this tribute night. A small crowd hung out outside the Exploded View Microcinema. A “Make America Great Again” Trump sign was taped to the floor at the entrance as a doormat. Everyone (including yours truly) seemed to take great pleasure in wiping our feet on it. The interior of the Exploded View is small yet inviting. It’s basically a hole in the wall with white walls to project films onto. 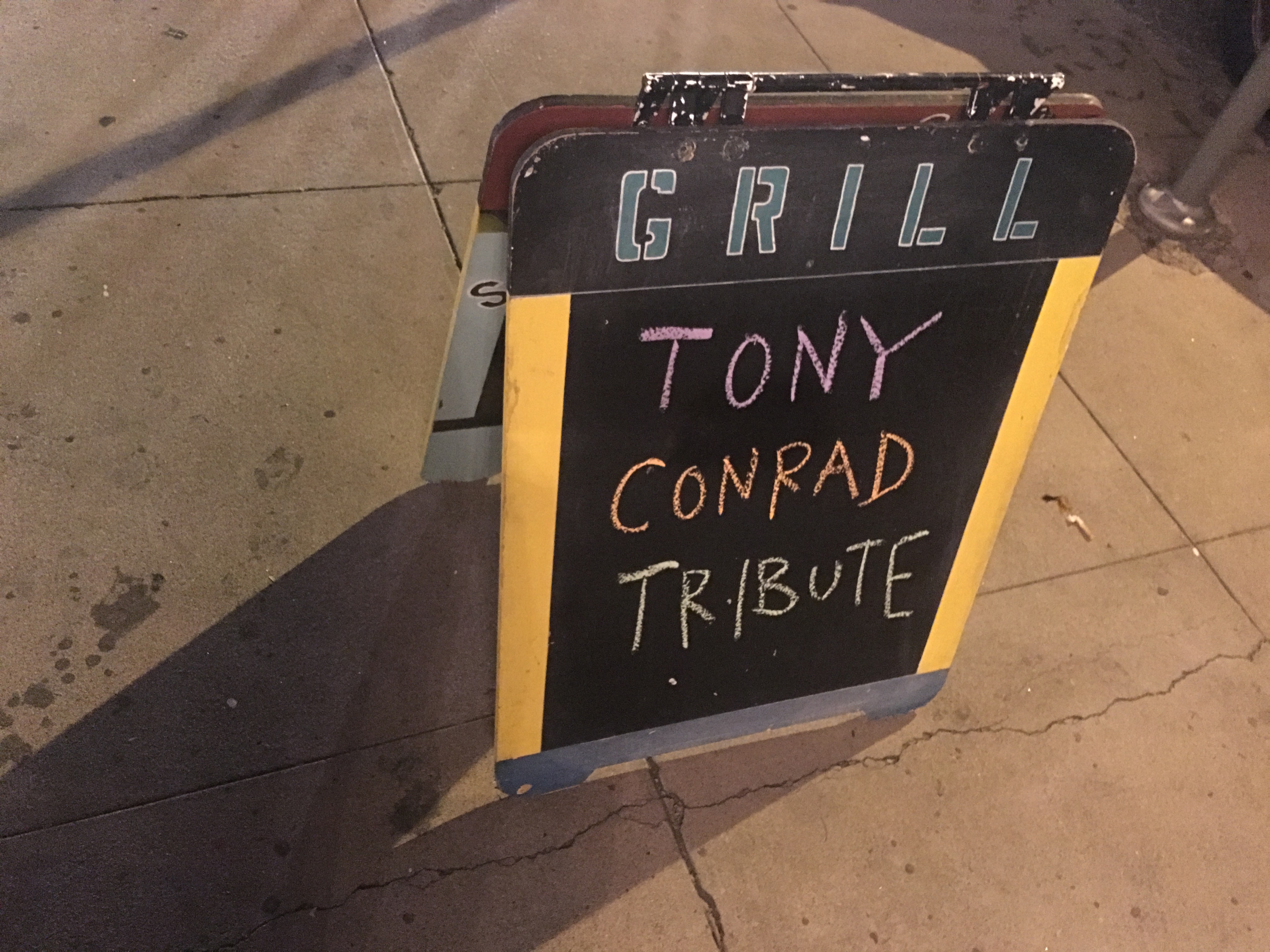 The evening began with a musical performance of an original piece by Glenn Weyant called “Tony Becomes A Buddha”. Weyant introduced the piece, describing it as an “anti-composer” piece. He set the conditions for the piece (which we could see, broken down into 5 minute increments, on scores that were handed out to us) and his ensemble had the freedom to do whatever they wanted within those limitations. A group of musicians circled up in the small room with a ring of loudly buzzing amps. The orchestra had cellos, violas, violins, amplified bowed guitars, and included a film projector as one of the instruments! 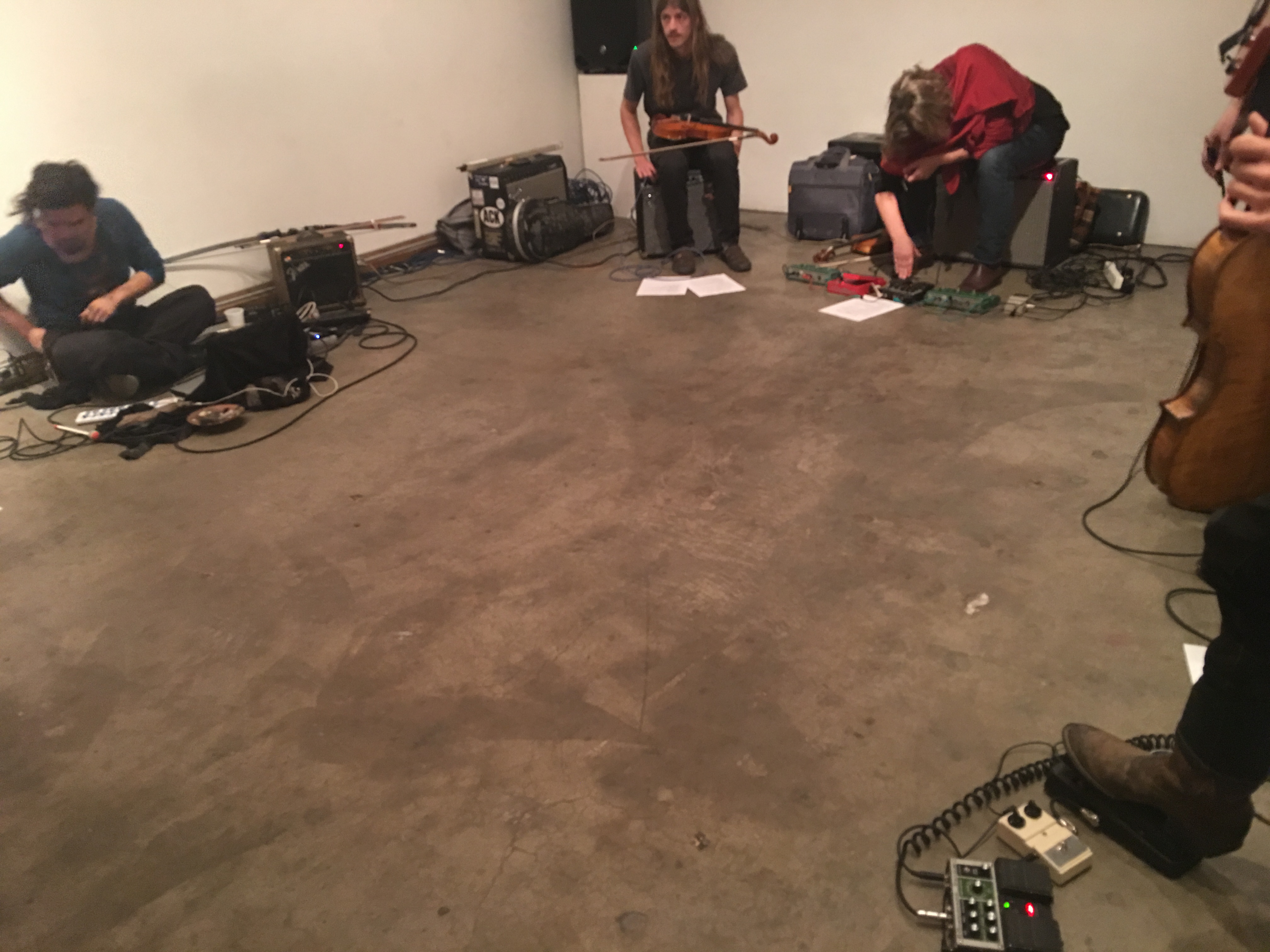 The piece began in darkness. The room filled up with the whirring of the projector, which sounded like the distant thumping of helicopter blades. The stringed instruments started droning, sawing away with steady intent, building in volume and power. They offered up earplugs before the show: I lasted five minutes before I popped mine in, as the drone grew louder. The projector was flipped on, projecting a small square of light to cut through the darkness. The projector was set up on a wheeled base, so the projectionist was free to spin the projector around the room, shining its light on each of us and making that light square dance around the noise. 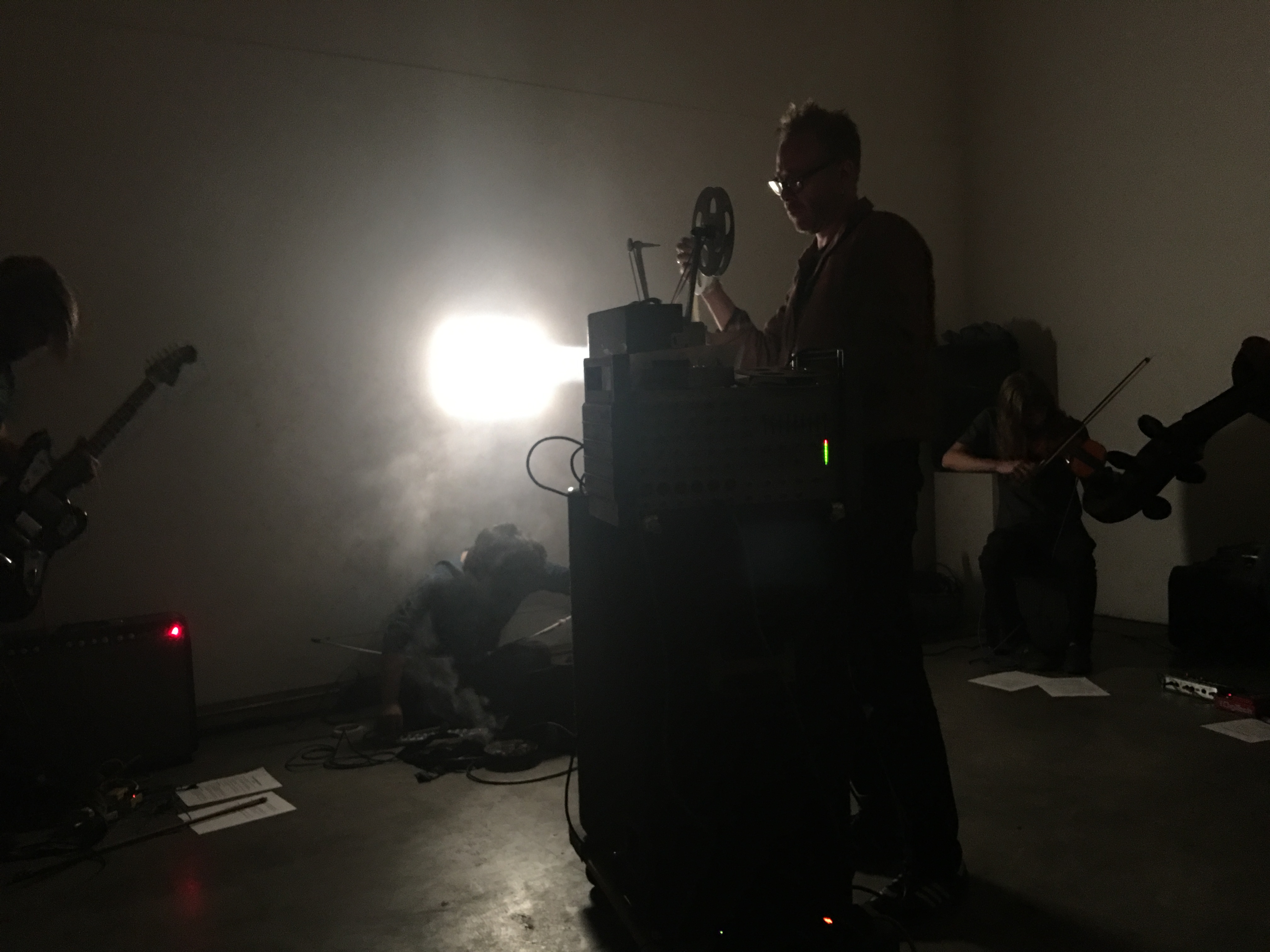 One of the musicians lit some strong-smelling incense, filling up the room with smoke. For a moment, when I first smelled it, I thought that perhaps something in the projector had caught on fire! The drone played on, beautiful and overwhelming. I could feel my body responding to it, swaying in my seat, like a snake being charmed. The orchestra continued building the drone for twenty minutes until the sound fell away, leaving only the hum of the amps. And once the amps were silenced, we were confronted with an incredibly LOUD silence.

The absence of any kind of sound, after twenty minutes of unrelenting droning, was unnerving. It would be like being magically transported from the heart of a city during rush hour to the middle of a forest at night. The contrast between sonic overload and total silence was so wild, it had an almost hallucinatory effect. I thought that perhaps the sound had pierced my earplugs and briefly deafened me- Surely SOMETHING must be making noise out there. This silence lasted for a couple of minutes. We sat in the dark, the only illumination the red and green dots glowing off their amps, before the lights came back up. 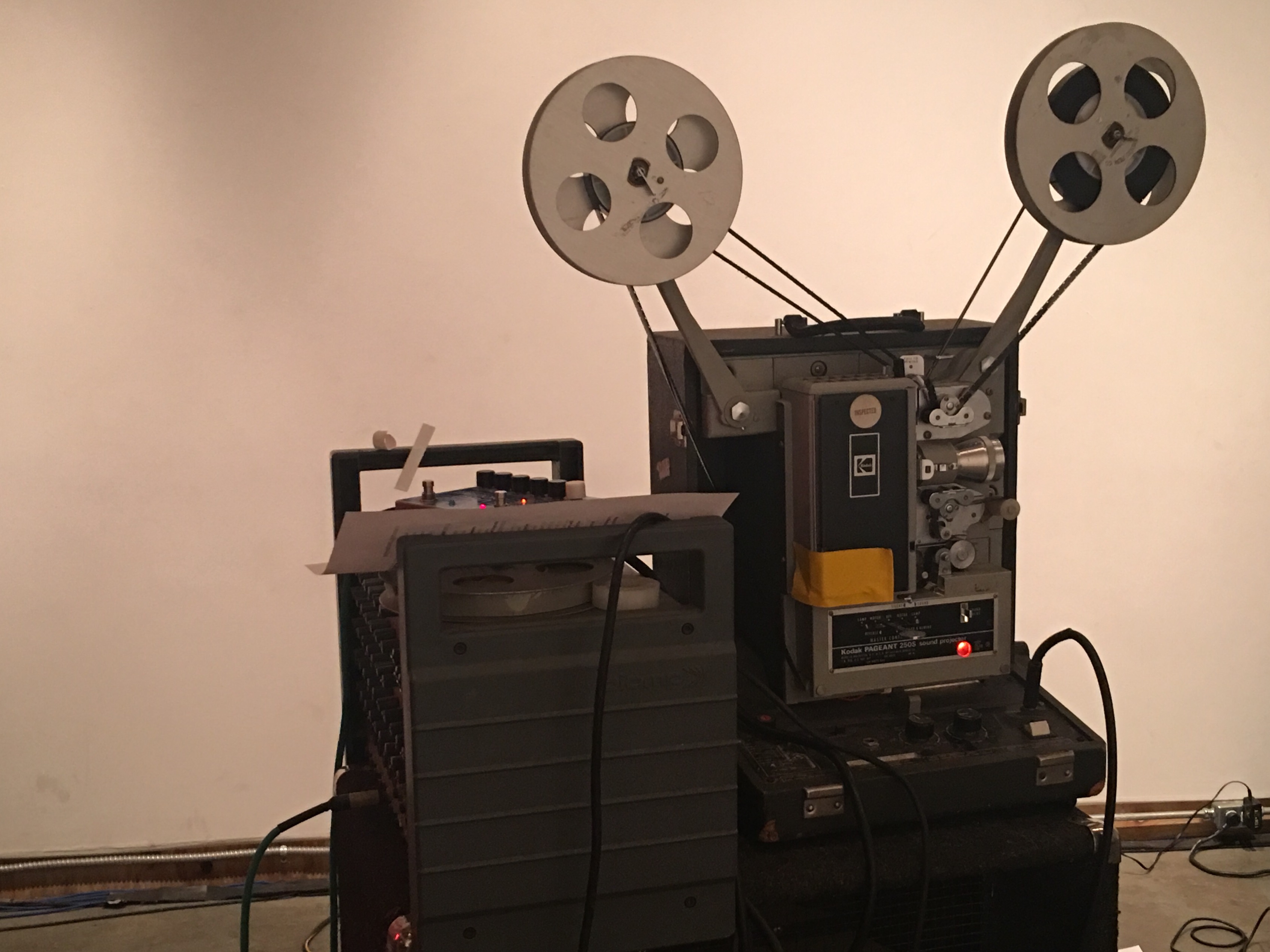 There was a brief intermission, as the orchestra packed up and rows of chairs were set up for the second half of the evening: The Arizona premiere of Tyler Hubby’s documentary “Tony Conrad: Completely In The Present”. The brief break between acts was welcome, as it gave me time to process the wonderful performance I just witnessed (as well as giving my ears time to stop ringing); It also gave me a chance to appreciate the nifty window displays and haunting “Stranger Things” street art decorating their block. 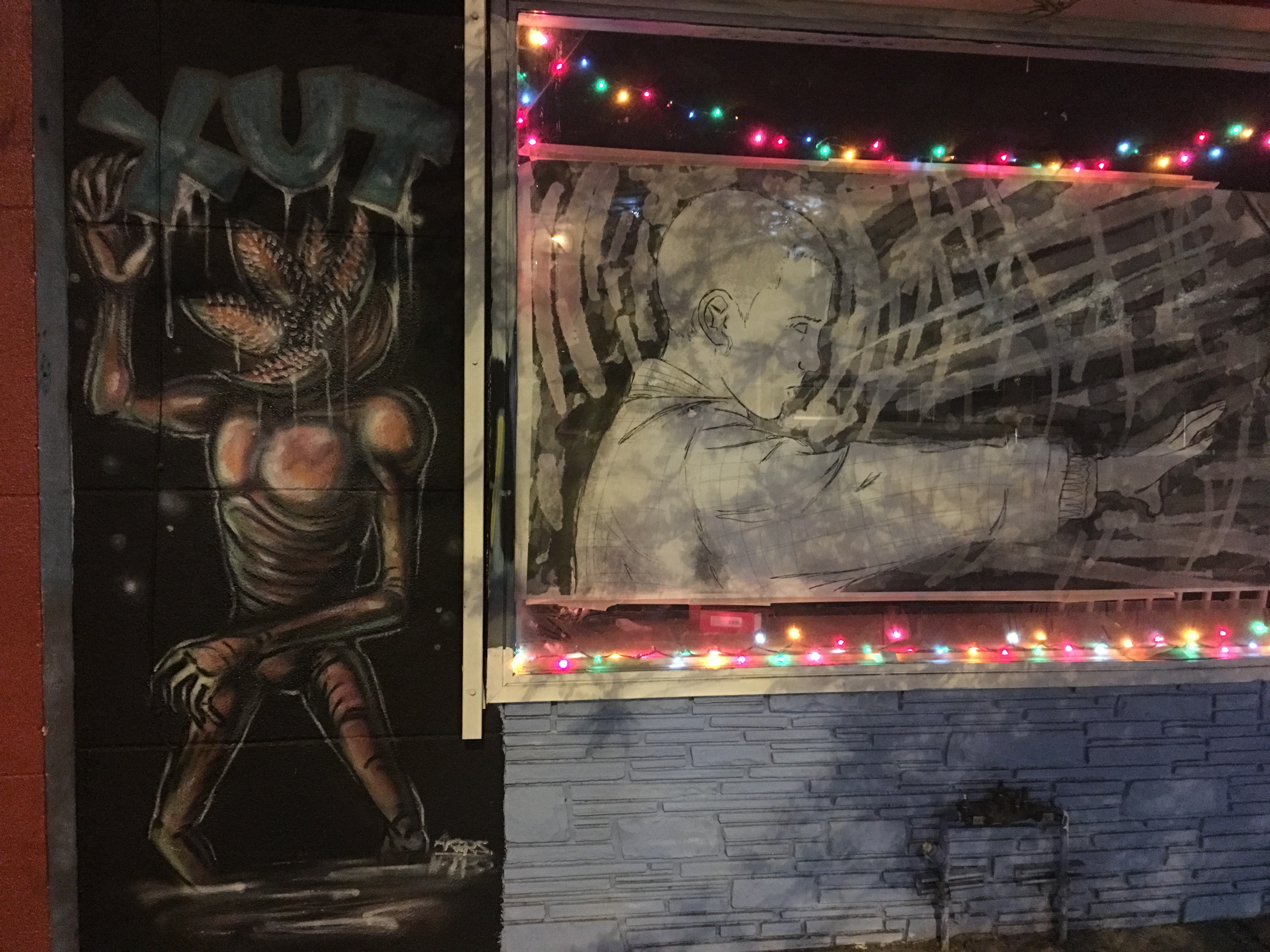 Tyler Hubby’s documentary was an inspiring look into the life of a fascinating and hard-to-pin-down creative genius. Filmed in black and white and scored with Tony’s droning violin music, “Completely In The Present” started off as a conventional “talking heads” doc in the first few minutes with musicians like Jim O’Rourke and Moby (?!) heaping praises on Conrad. I was worried that the whole thing was going to be like this, but Hubby wisely refocuses the film to follow Tony around and let him tell his story. 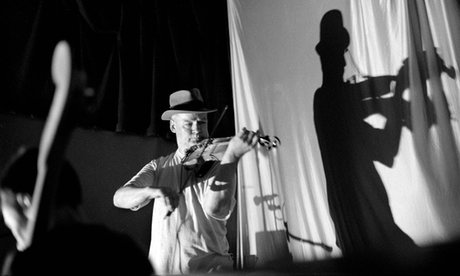 Conrad is a great film subject. Affable and wry, he has an unpretentious and friendly manner on camera. He looks and sounds a lot like Jack Nance; If only Tony were still alive, you could imagine him joining the Twin Peaks universe as Pete Martell’s college professor twin brother. The film starts off by talking about his early years in New York with the Theatre of Eternal Music, helping to invent modern minimalist music with La Monte Young and John Cale. It delves into his work and friendship with Lou Reed, and from there branches off into exploring his (huge) body of film work.

“Completely In The Present” isn’t just a great profile on Conrad: It also works as an introduction and spotlight on the underground film scene. Luminaries like Jack Smith, Ron Rice, Jonas Mekas, Mario Montez, and Beverly Grant get talked about, and the film shows rare clips from classics like Smith’s “Flaming Creatures”. The film does a great job explaining the appeal of this D.I.Y. fringe world to Conrad, and establishes his place within this obscure tradition. And of course, it talks about his mindfucking masterpiece “The Flicker”.

From there the film talks about his work as a professor of media studies, his strange experiments with “cooking” film (pickling celluloid and making curry out of film strips), and his various elaborate film projects (including a prison movie that Conrad was so dedicated to, he bought the building the set was housed in, leaving it untouched for almost 3 decades before he resumed working on it!). Towards the end of the film the doc takes a weird structural turn, “rewinding” to go back to the early 1970’s and spotlight Conrad’s musical career again. It talks about his collaboration with the German band Faust, and how that record led to Conrad’s rediscovery and embrace as a hero by the post-rock community in the 90’s (even going so far as to record an album with Steve Albini; It doesn’t get more 90’s than that!). 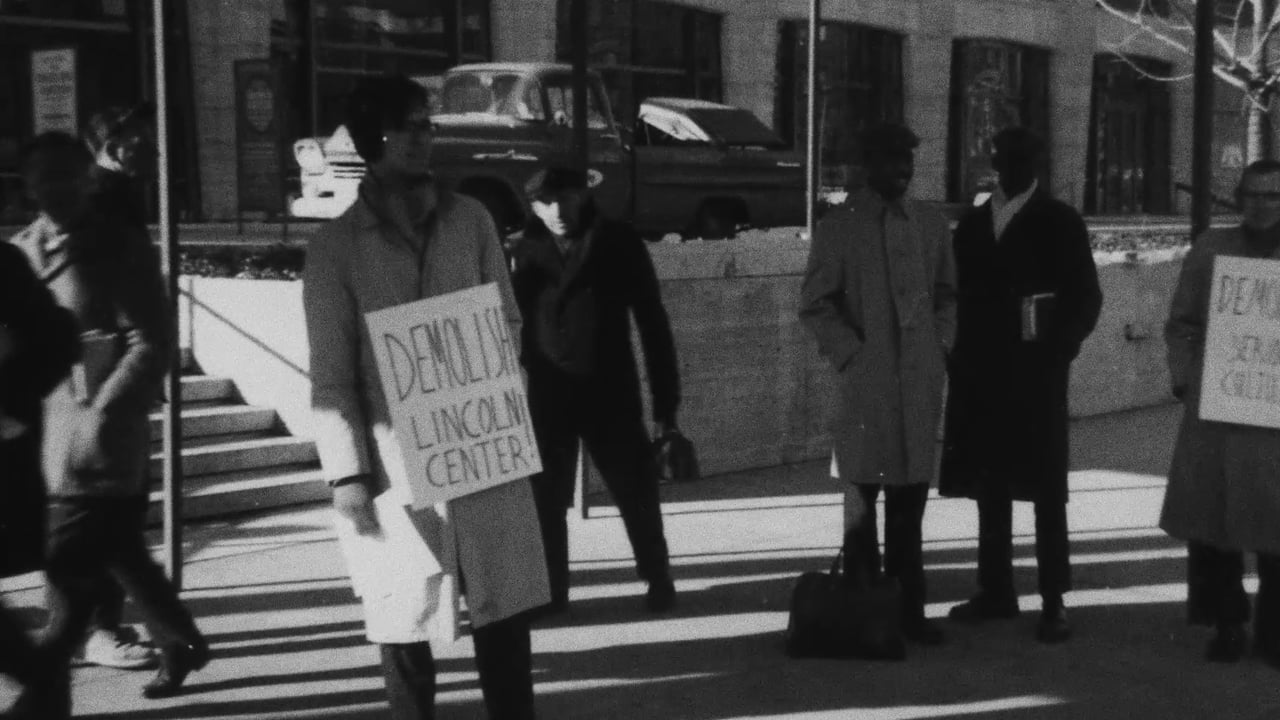 Leaving Exploded View after Hubby’s film ended, I was struck by just how inspiring a figure Conrad was. A man who proved to be tremendously influential in the worlds of music, film, and conceptual art, and yet he never seemed full of himself. He seemed like a man who did art for exactly the right reasons: Because it was fun. In times like these, where it’s so easy to be cynical, where it can be so tempting to look at one’s work through the lenses of “metrics” and “engagement” and “fuck you, pay me”, it was bracing to get a reminder that the best artists, the best humans, don’t let that shit get in the way of having a good time with their work.

Tony Conrad, above all else, was a playful man. Hubby shows us this side of him, in the film’s closing moments, as Conrad “conducts” passing traffic on busy New York streets. A bemused Conrad stands in the middle of a crosswalk, waving trucks through, thanking them for their thoughtful playing. Bystanders walk past him, looking at him like he’s a lunatic. To me, he looks like the only sane man in the frame.