HEALTH & HO99O9 made us sweat at The Rebel Lounge

It’s been awhile since I’ve seen a show where the opening act annihilates the headliners. Last night at the Rebel Lounge, I saw this rare eclipse happen.

I was there to see HEALTH. I saw them play The Rhythm Room years ago when they were touring “Get Color” and they put on an energetic and LOUD show. Considering how shitty this week has been on a geopolitical level (“Hey, Four Horsemen of the Apocalypse, make yourselves at home”), any excuse to get buffeted by sounds and get distracted from the looming spectre of a grim future was welcome. I got there round 9, which means I unfortunately missed Soft Shoulder’s set. 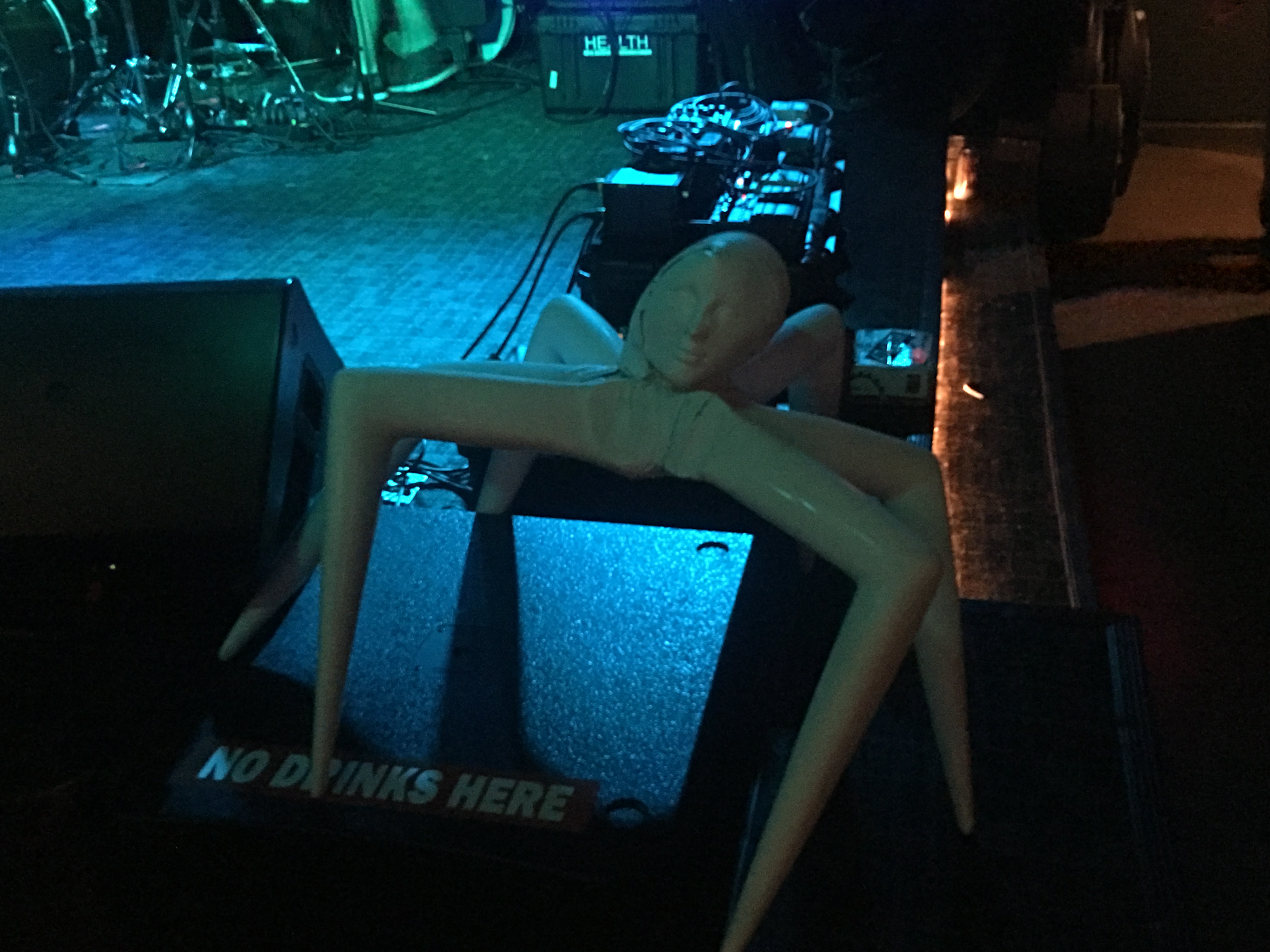 I could tell this was going to be a weird show as soon as I walked in the door. On the side of the stage was this weird sculpture: A mannequin head affixed to six legs. In the crowd were a pair of women wearing spectral white dresses. One of them had two heads: Another mannequin head was tied to her face with gauze, making her look like a mad scientist’s attempt to fuse a Victorian woman with a window display. The other woman had pale face paint and long snow-white hair. They drifted through the crowd, both of them silent and tranquil. I had no idea whether they were in a band or some crazy devoted local fans doing some performance art. 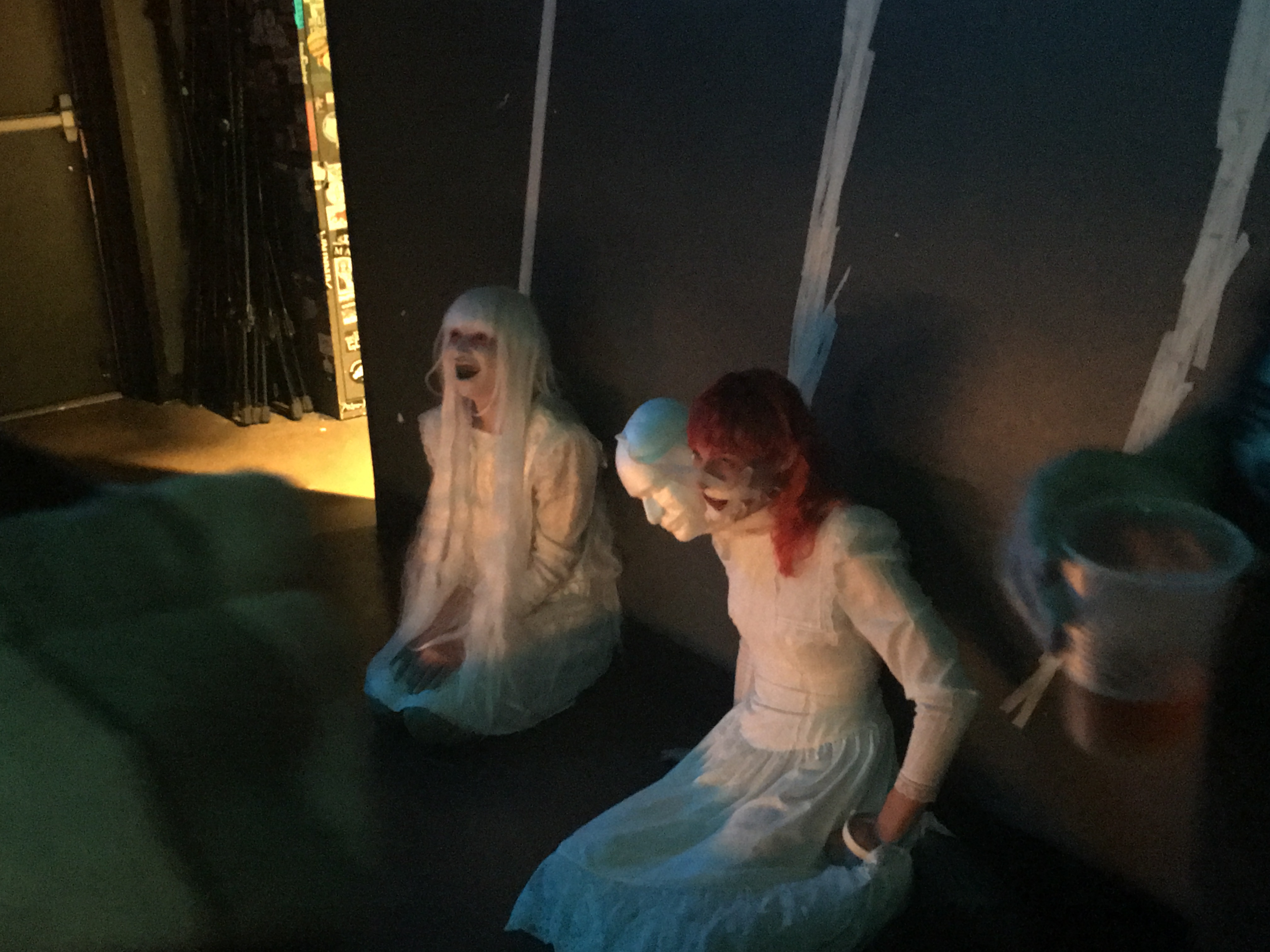 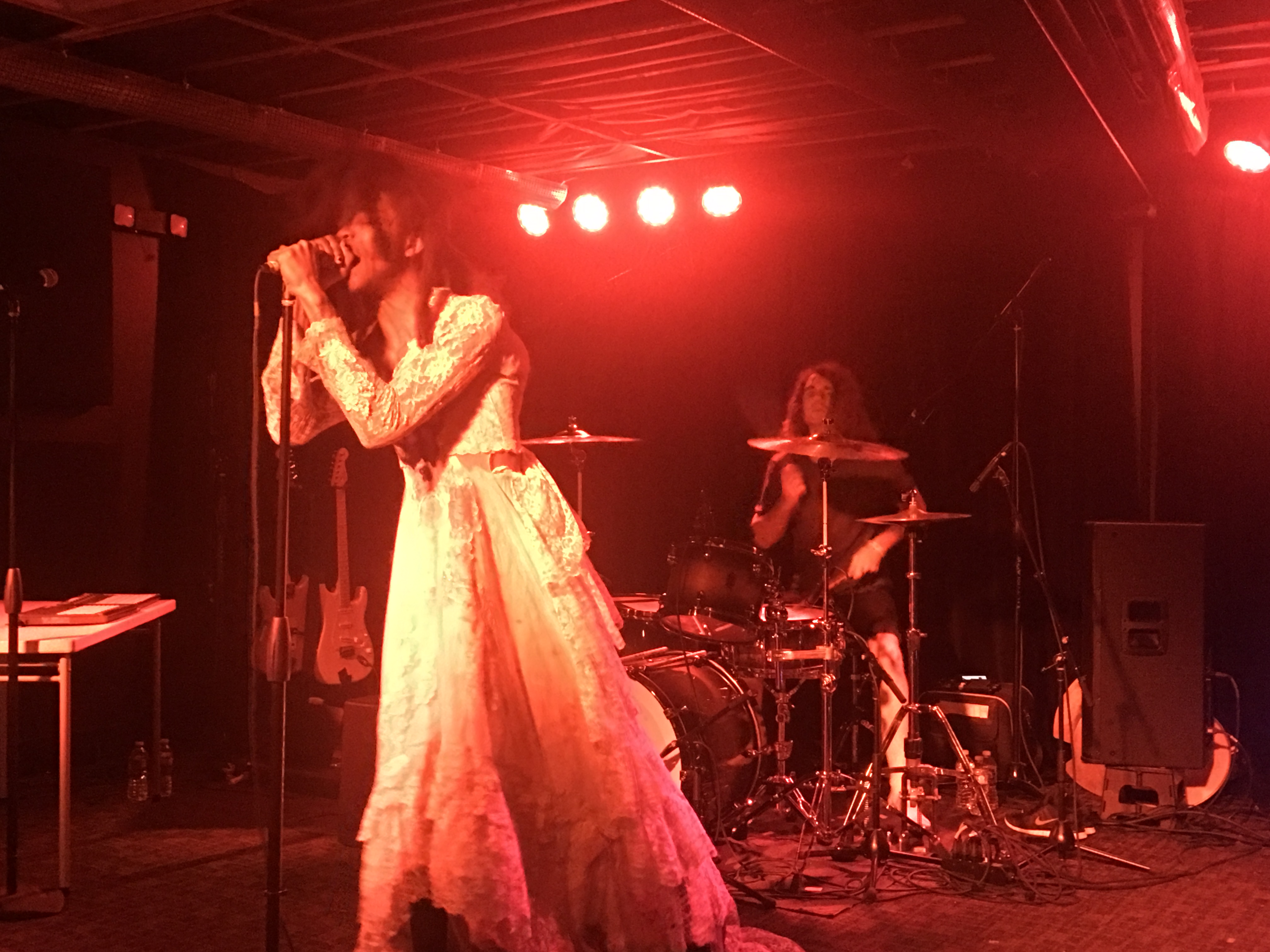 I didn’t have much time to dwell on the weird ghost-ladies: HO99O9 climbed onstage for their set. I had never heard of them before and had no idea what to expect. Actually seeing the band made me even more unsure of what I was in store for. They had a drumkit set up onstage, along with a folding table with some electronics piled on. The singer bounded onstage in a flowing white dress. As the music started playing a sinister crawling rhythm, he rapped harsh and guttural. He was quickly joined onstage by H09909’s other frontman, a ripped dude in a Black Flag “Police Story” t-shirt with a green ‘hawk. And that’s when SHIT GOT REAL. 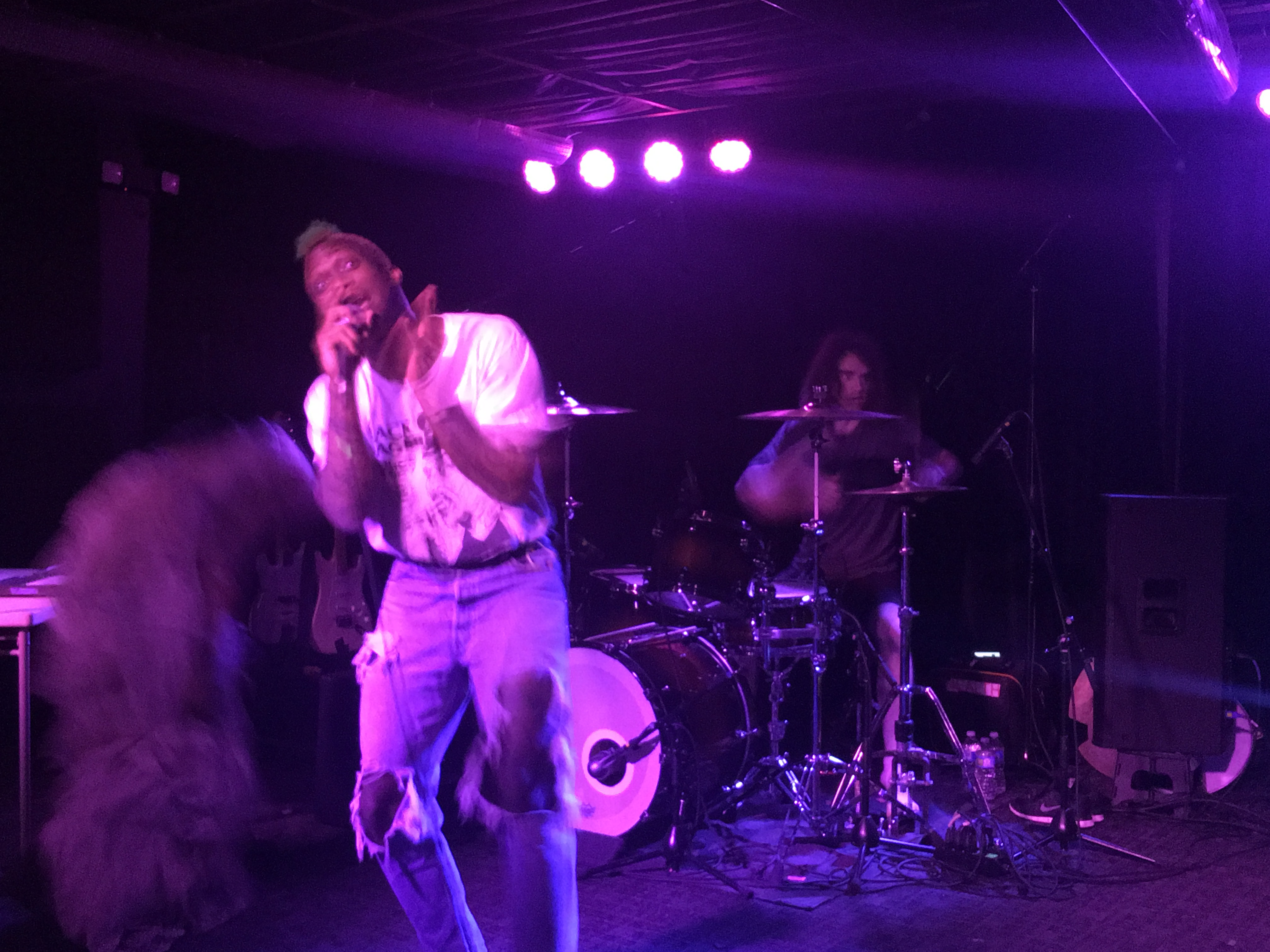 The music warped into manic overdrive, HO9909 blasting the audience with a furious mix of hardcore punk & aggro-rap. The dudes in H09909 radiated intensity, spitting on the mic and prowling the stage like big cats marking their territory. The audience went bananas over their music: Mosh pits kept breaking out throughout the set. At first it seemed like Rebel Lounge security tried to break the pits up, but they quickly abandoned that tactic. With music this fast and powerful, the urge to slam-dance is inevitable and natural. 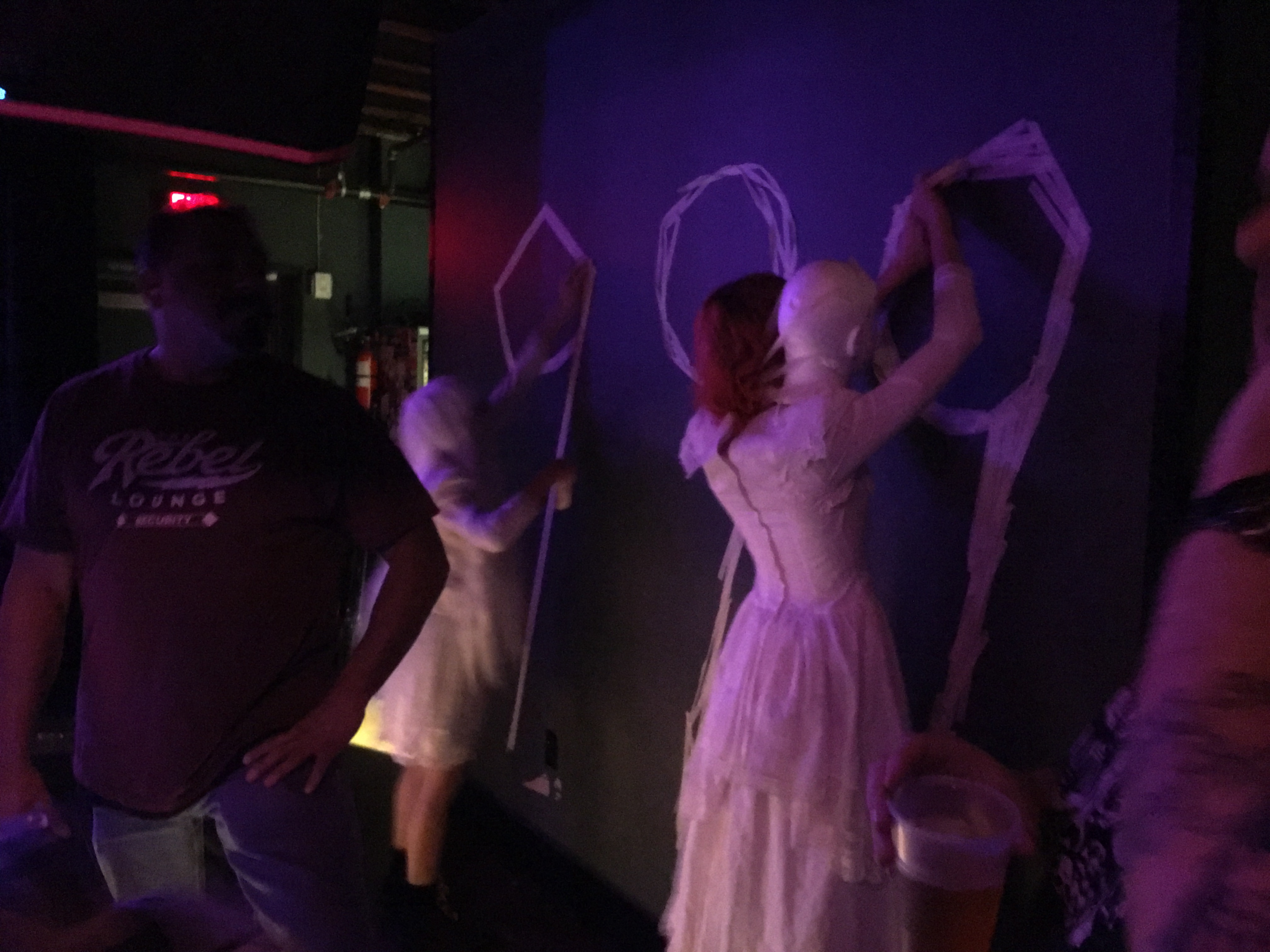 The ghoulish girls in the audience revealed themselves to be a part of H09909’s show. They stood on the side of the stage, using masking tape to throw up a giant 999 on the wall. It wasn’t the only theatrical element of H09909’s set: The man in the wedding dress would later don vampire fangs for a song, and would later strip off the dress and put on a pair of goggles and wear tentacles on his fingers for another number. The dude in the green ‘hawk hopped into the audience, telling the crowd to “spread real wide, like butt-cheeks”. Standing in the middle of a parted Red Sea of sweating revelers, the man from HO9909 asked us to show him what Phoenix has got, even taking a moment to taunt a guy glued to his cell phone in the crowd. A furious pit broke out, bodies colliding into each and limbs flailing wildly. I was one of the human pinballs being bounced back and forth among the flesh-bumpers. 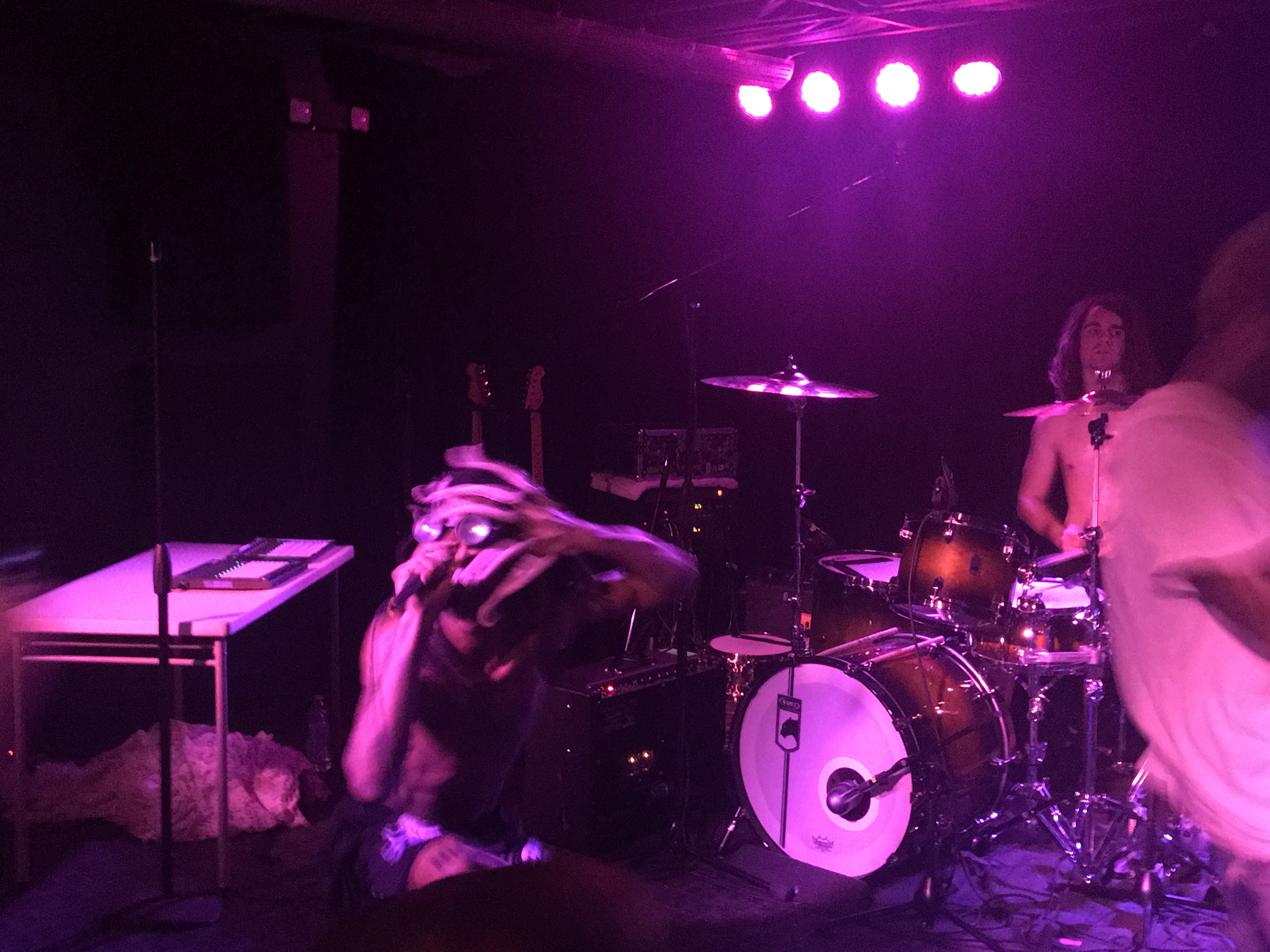 When H09909 ended their exhausting, batshit-crazy set, the crowd chanted for an encore. An opening act getting an encore chant? It doesn’t happen often, but in this case it was totally warranted. H09909 rocked so hard you could feel the walls themselves dripping sweat. Clearly an encore wasn’t planned: The venue had already turned on the house music. But H09909 went back up and played one more “party” song. The beat sounded like The Prodigy’s “Firestarter” if you gave that song a few bumps of cocaine. We bounced up and down to the song, which sounded like it was on the verge of self-destructing at any moment. H09909 left the stage looking like they had lost 20 pounds just through sheer sweat. 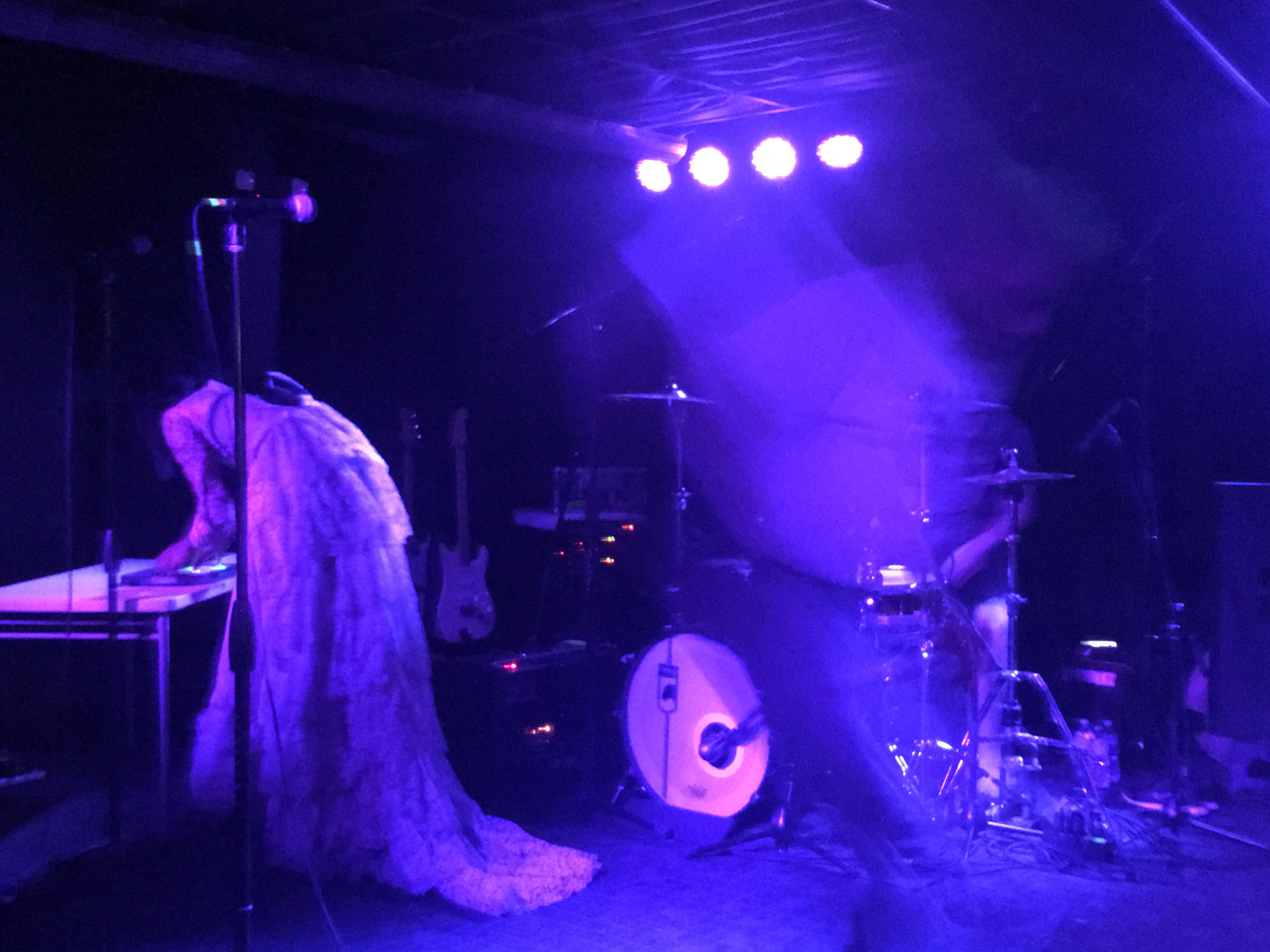 “Put me in your Instagram, bro,” one of the dudes in the crowd says to me after the set. His name is Rene, his buddy is Omar, and according to them we’re mosh bros now. Few things can make you feel as connected to a group of strangers as hurling your body into them repeatedly while getting tinnitus. “Ignore all the hot chicks”, he tells me as I try to find my profile on his phone. The crowd around us ebbs and flows, the house starting to pack for HEALTH’s headlining performance. HEALTH took to the stage as a trio. Flashing lights blinked and flickering behind them throughout their set. They played a loud, head-nodding, bass-y set that focused mostly on “Death Magic” cuts (though they did pepper in some older tunes, like the sublime “Die Slow”). “It sounds sinister, but you can dance to it” is how one audience member described HEALTH’s sound to a friend between songs. Couldn’t have said it better myself. 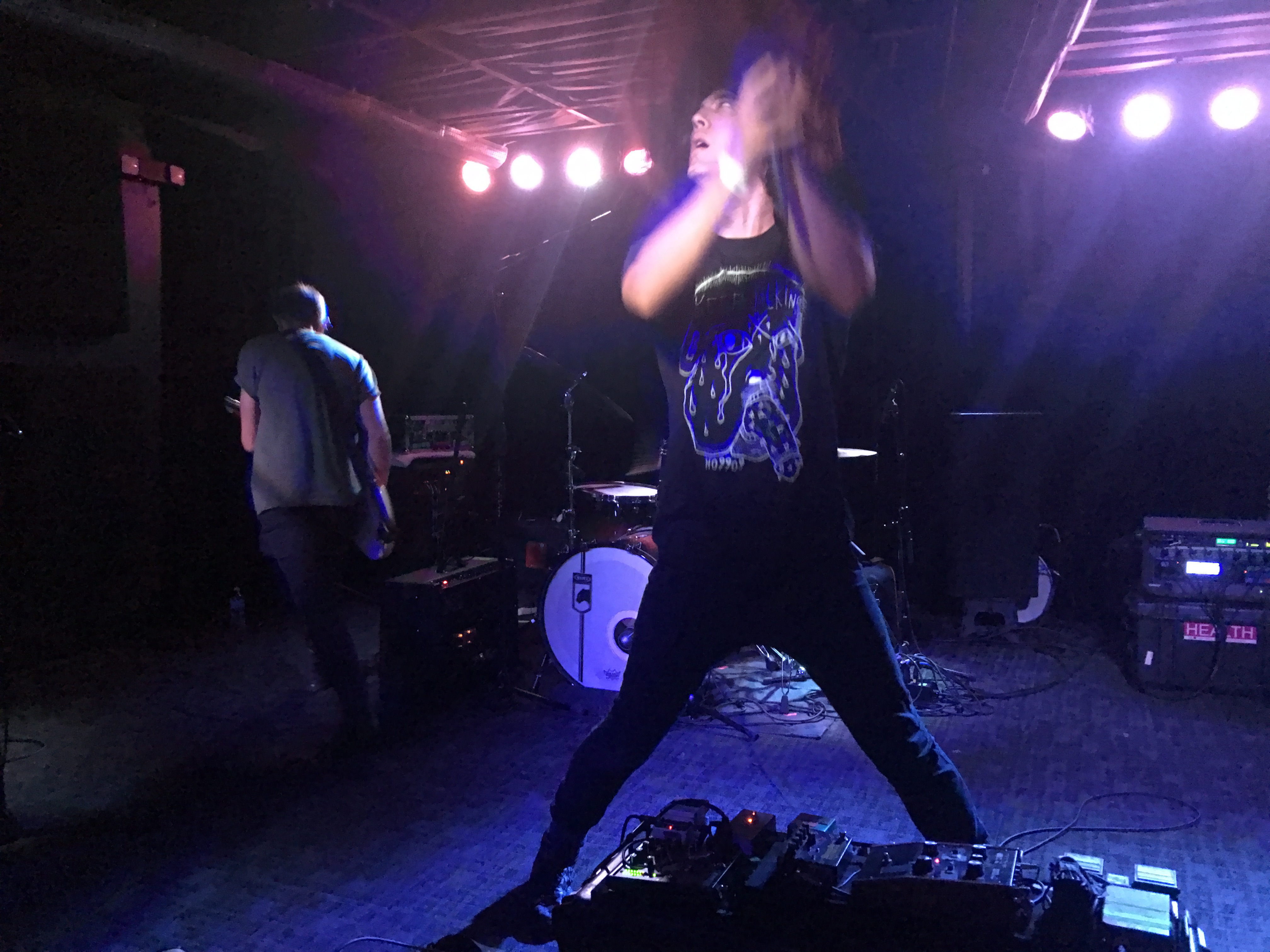 There were some slight technical difficulties throughout the set. The bassist had to keep adding gaffer tape to keep his bass strap on, so they would sometimes stall by playing electronic instrumentals as he taped away. By the end of their performance, there was so much gaffer tape on his guitar that it looked like had crowned his bass with a black boxing glove. You couldn’t hold it against him, though: HEALTH’s bass player was far and away the most enthused, energetic, and interesting person to watch onstage. He must have spent 80% of his time onstage whipping his black hair back and forth, which makes me think HEALTH should seriously considering adding some Willow Smith covers to their setlist. 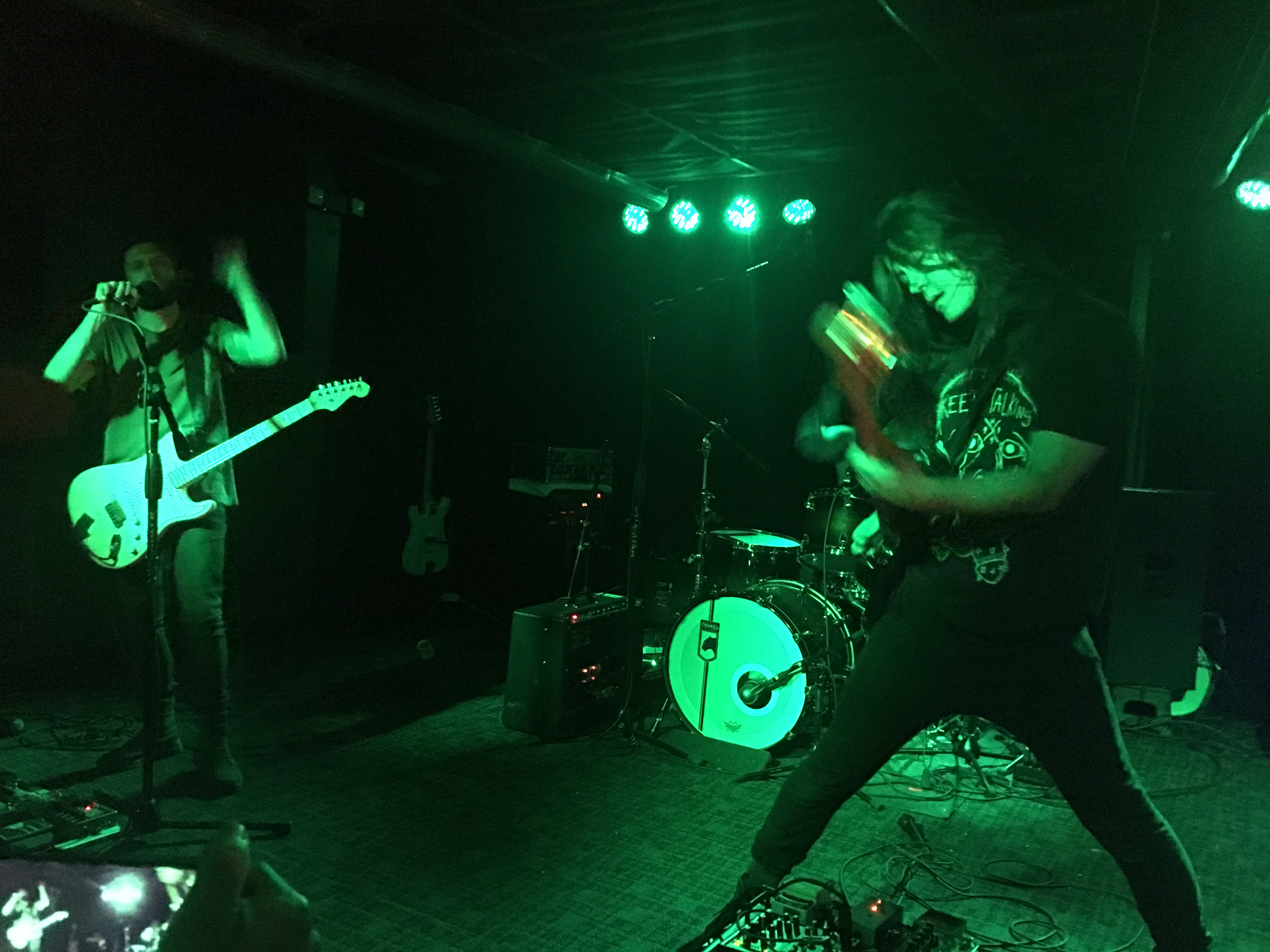 HEALTH played a fun set, but it was obvious that they had been upstaged by their opening act. HO9909 just came at the crowd harder, and played their frantic set like their lives depended on it. And with the added theatrical elements (the costume changes, the ghoulish girl twins), it felt like we were watching something that was both wild and chaotic yet thought-out. HEALTH didn’t have to go to any lengths to wow or impress us: They could just play their hits, knowing that the packed house was here to see them. But I couldn’t shake the feeling, throughout their set, that I’d rather see H09909 play again. As cool as it was to hear “Dark Enough” live, I wanted some more edge, some more spontaneity, to feel that things could go off the rails at any second.

Ironically enough the most unpredictable and fun moment of HEALTH’s show came from the most tired part of it: The encore. I’m not going to get too deep into it, but 9 times out of 10 I hate encores. They rarely feel unearned, and most of the time feel perfunctory. HEALTH quickly came back onstage to do their encore, and it was like they suddenly became a different band. For one minute they skronked and jammed onstage, shredding furiously and kicking up an impassioned racket. And then they grinned sheepishly and shrugged, as if to say “That’s it”, and left the stage.

It was tossed off, a gleeful “whatever, here’s some bullshit” encore and it was GREAT. I wanted to see THAT band play a whole set. Maybe the next time they come to town, they will.