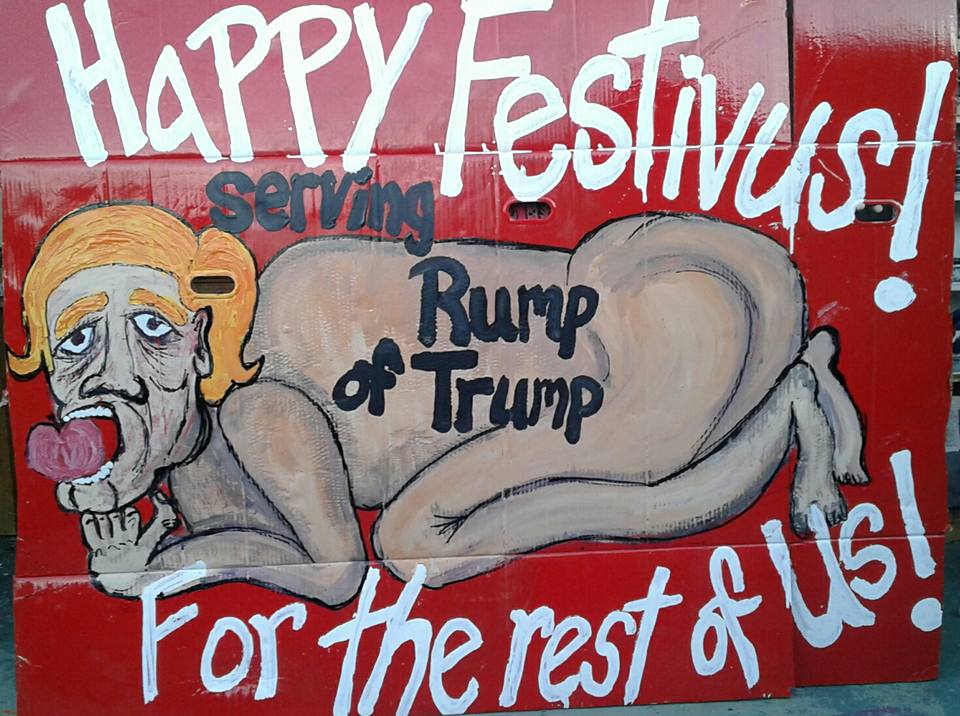 Riding my bicycle down 1st Avenue, I’d passed Rob McElwain and his signs many times while on my way to the light rail. I enjoyed many a sensible chuckle at his cartoons: hand-painted and discordantly-colored caricatures of Sheriff Joe, Trump, and the many other court jesters of the 2016 presidential race. I never thought of actually talking to the guy until after November 8th., when it finally hit me that the time for spectatorship had long passed. I had some catching up to do.

Waiting at the Washington St. traffic light one morning, I decided to wheel my bike up to the curb. I was curious to overhear what people had to say as they passed Rob’s usual corner of the Wells Fargo building. It was pretty quiet. A couple of guys grinned and gave him the thumbs-up. Another person huffed and sneered as he hurried past. However, it seemed that the majority of people, like myself, wanted to appear uninterested despite their obvious rubbernecking. I wondered why that was; whether they were too shy to engage, or afraid to risk confrontation, or simply unwilling to step outside of their passive (or passive-aggressive) comfort zones. 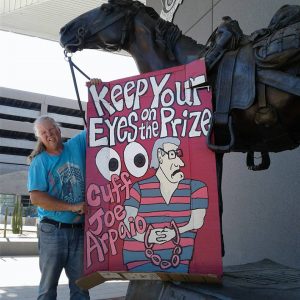 Rob McElwain with one of his many signs.

I also wondered of myself as to why I preferred the role of silent voyeur on the subject of politics. I already knew the answer: for one, it was the dislike of conflict, and for two, the shameful awareness of the fallibility of my own measly opinions. But in the process of self-preservation, one saves face and loses voice. I decided that there couldn’t be a better time to engage Rob in an interview than while on my quest to discover the my role and potential in both local and national politics. In it, I hope to learn about the roots of an engaged citizen, and the type of thinking that sustains peaceful opposition on both an individual and collective scale.

Hannah Walsh: Thanks for taking the time to chat, Rob. Tell us a little about yourself.

Rob McElwain: I am 61 years old. College degrees earth science. Worked in soils engineering. Mutual dissatisfaction with my career. Further education in humanities by classes and self study and traveling to Europe 20 to 25 years ago.

HW: How did you first get involved in political activism? Have you been a part of other protests?

RM: Political interests initially Democrat in earlier years, unfolding radicalization beginning 1986 or so with Iran Contra scandal. Was mostly passive participant in Battle of Seattle 1999, World Bank/IMF protests 2000, Battle of Los Angeles protest, summer Democratic Convention 2000. Political ideas gelled 2000 to 2005. Lost job and going no where fast in 2006/7, physical injury limited physical work at same time. In 2007 I began working with Day Laborers (jornaleros) at Macehualli Day Labor center. January 1st 2007, the radical right began a vigil at Macehualli that lasted nearly 2 years of my participation with Day Laborers, their leader Salvador Reza, and the group of indigenous people whom I continue to work with at Tonatierra.

HW: So you’ve been quite active. What initiated the vendetta against Sheriff Joe?

RM: With Arpaio’s escalation of raids and policies, our group from Tonatierra began daily protest in front of Arpaio’s office in the Wells Fargo building. We began after Labor Day 2008. Sometimes 50 or more people attended daily noon hour protest. Many who participated are now in separate group called Puente. As daily protest continued through about 1 to 2 years, the group reduced to 5 to 10 participants, then 3 to 4. Finally myself.

HW: When did the hand-painted signs come into play?

RM: I was regular [with Tonatierra] for most of the time because I had a truck to pick up signs. Since signs were necessary, I had to be committed to being there. Signs were not too advanced. I made some, others made some. Used a consistent variety of signs. A lot of emphasis in first couple years were chants, bullhorns etc. Not the colorful comedic signs I use today. As people dropped out, I was left alone, so the signs and any attention I was going to get was mine.
I didn’t have any skill or concept of me as painter. But I did need to get attention and as I first started painting images instead of just words, I saw that I could roughly pull it off. Then I narrowed done my materials to bicycle boxes and “oops” paint from Home Depot. Collected better colors of latex (easy to use) paints and became more interested in funny signs to mock or ridicule Arpaio. 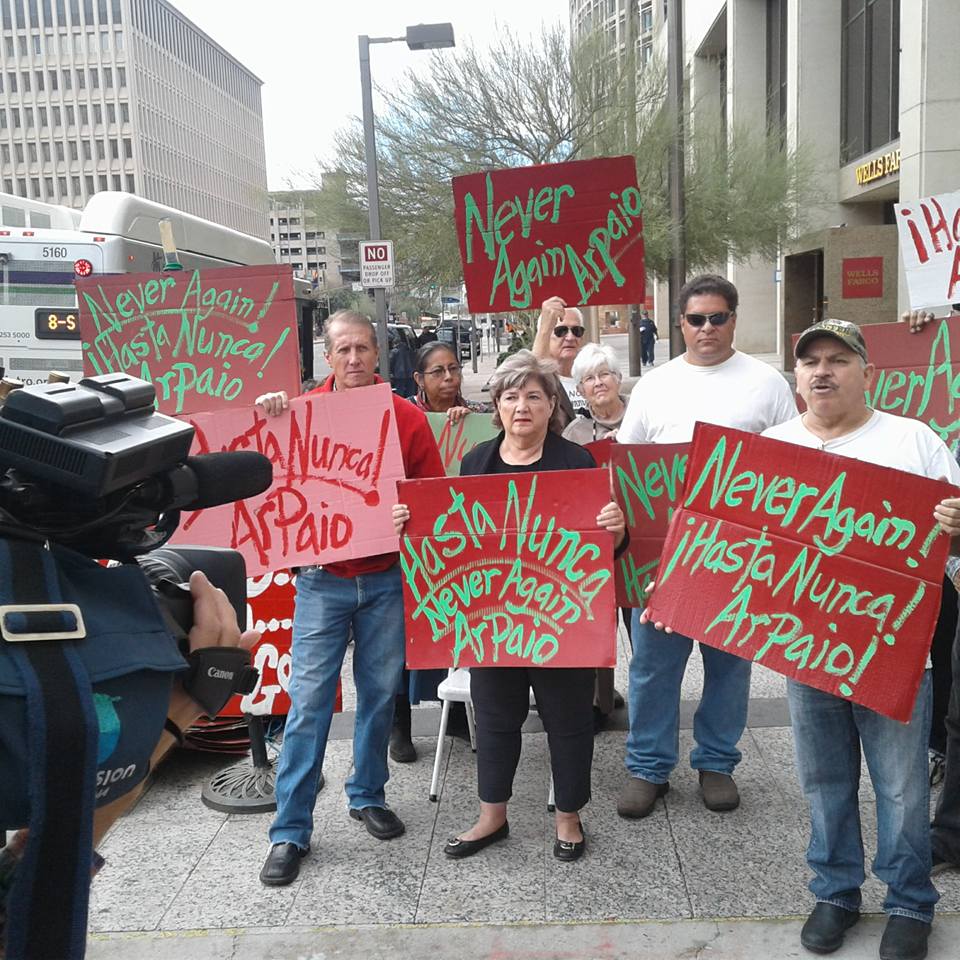 On December 16, a small crowd gathered on the corner of 1st Ave and Washington to celebrate the ousting of Joe Arpaio. Photo courtesy of Rob McElwain.

HW: Painter or not, I’d say you have a knack for it. How do you come up with new material?

RM: I got better at making signs about 4 maybe less years ago when I got Android phone and started uploading pictures to Facebook. Facebook began my concurrent story telling of individuals with pictures of them with my signs. I needed constant new signs so my Facebook pictures would have variation. Making 2 to 3 signs a week and sometimes 4 a week. Need for new and fresh messages for my fantasy that it mattered so I kept the routine going.

HW: With Arpaio gone, Trump seems to have become your primary target for satire. Got anyone else in your sights?

RM: Trump moved into the mix during his first appearance with Arpaio in July 2015 primary. Trump became equal, and then prominent with Arpaio now out. No one else in sights except Trump, but how could I have guessed Trump would fill in for Arpaio after November 8th?

HW: You must encounter a great variety of people whilst sitting on the corner. What sort of reactions do you get?

RM: It is very difficult to get the majority of people’s attention. I have often said I could have Jesus Christ himself up on a cross and I still wouldn’t get much attention from most pedestrians. So the replies I do get are often from people who have suffered at consequences of Arpaio and his henchmen. I am surprised that some regulars who walk by every day occasionally come by and have interesting conversations that tell me people are paying attention even if they don’t pose for a picture etc. For example, a guy who works with Federal Judge Snow, who is hearing the racial profiling trial, Melendez v. Arpaio, asked if I was going to bring out the signs with Judge Snow again so he could get a picture. More examples, but some seemingly disinterested people are watching.

HW: Do you hope that people get something specific out of their encounter with your signs?

RM: I would say my hope that people realize that “something must be done” to address our problems. It’s not just about Arpaio. It is about indifference and responsibility. You can’t be passive. You know the definition of crazy? Doing same thing and expecting different results. My message is, you can’t just show up at major protests like I did at Battle of Seattle and others and hope for change. The establishment has that shit covered. You have to organize your life for change. Maybe I’m a dreamer?

HW: What do you get out of it all?

RM: Having a good time. Looking at my signs, I crack myself up. I am my biggest fan. Not that I think it is good. But I love mocking these fools. I love adding friction to my opponents. I hope I get under their skin.

HW: Following the election, many creative young people, especially artists, have been working to have their political voices heard. Any thoughts or advice for them?

RM: I think I answered that [in the last question].

HW: Do you have a favorite artist/ cartoonist/ satirist?

RM: Favorite artists? I like R. Crumb. Oh Gary Larson’s Far Side was always a favorite. I use whoever I can imitate. Did Bart Simpson. South Park. Did video Game characters from Five Nights at Freddy’s. I look at movies like Despicable Me. Lots of old rock and roll references. I could name a dozen rock and roll phrases I have used: “everybody must get stoned,” “a whiter shade of pale,” “imagine no Arpaio, it isn’t hard to do,” and lots and lots more.

HW: Any other creative projects going on?

RM: Just trying to make every day relevant to what I am doing. Don’t venture into other fantasies like collecting work into organized fashion. That would take away from my goal of bringing friction to the status quo.

After talking to Rob, I concluded that regardless of approach, humor is indispensable when bringing your voice to the public. You don’t have to be a good artist, or assume the title of “artist” at all, in order to confront people with challenging visuals and rally for a cause. Most of all, I think the key to Rob McElwain’s persistence is his enjoyment of his own work. Give yourself a laugh, and others will follow. Or it’ll piss them off. Who cares, so long as it makes a difference? 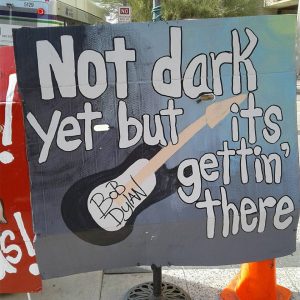 One of Rob’s music-inspired signs.

You can see more of Rob McElwain’s work by following him on Facebook.