One of the few things I really miss about Phoenix “back in the day” was the mixed-bag aspect of live shows. Going to Trunk Space shows or Conspire & Firestage open mics, there was always the sense that ANYTHING could happen. That you could watch a band play one minute, and see an improv troupe the next. Poets working next to comedians and bucked naked performance artists. The lines separating entire realms of performance felt thinner, easier to breach.

Inevitably over time the different art groups harden into their own subcultures, open their own dedicated venues, stick to their own kind. The necessity of having to mix alongside and work with other disciplines goes away. I’m not trying to say that that kind of eclectic programming doesn’t still exist. But it feels rarer these days. It feels like the kind of thing that you have to MAKE happen, rather than something that just naturally occurs.

I’m always grateful when someone does make the effort to mix things up, because it almost always ends up producing a fun and eye-opening experience. Last night’s show at the Mesa Arts Center was a great example of this blending of different approaches and mediums. The Trunk Space, working alongside the fine folks at Four Chambers Press and nueBox, had put together “an evening of interdisciplinary performance encompassing sound, media, dance, and theater.” 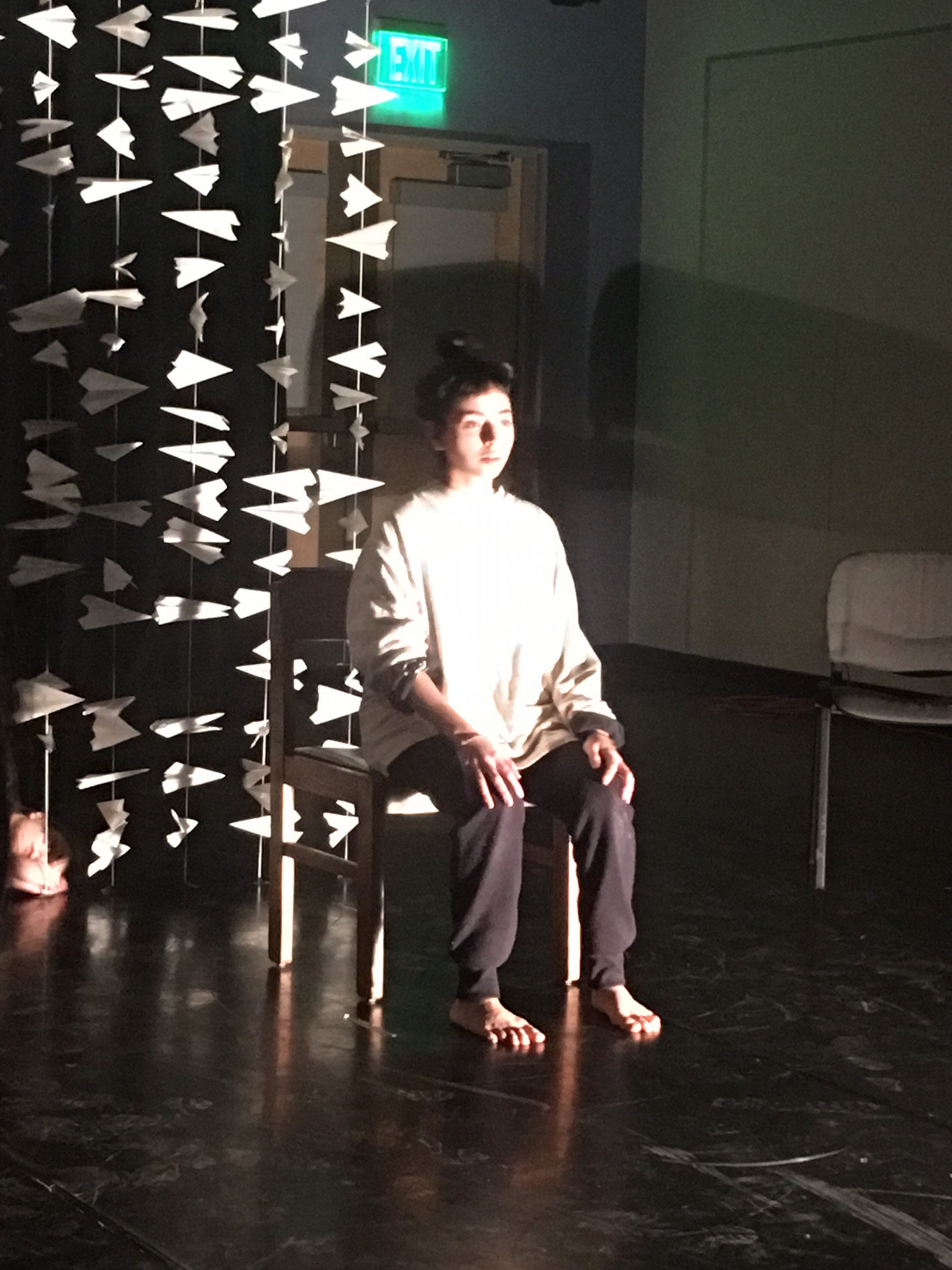 It was a short and sweet night of performances, barely passing the one hour mark. Which is NOT a bad thing: After sitting through three hour long plays and band nights that shoot past five hours, it’s refreshing to get jolted by a bunch of art quickly and concisely and still be able to get home at a reasonable hour. The set for the show was in a large yet bare room (dimly lit with orange lights) in the Mesa Arts Center south studios. Hanging from the ceiling was a curtain of paper airplanes, suspended in columns on strings. Taped to the floor, occasionally a string of planes would pop loose and spring up before getting fixed back in place.

First up was “Duality: neither (Here) nor >>>There”, a collaborative sound and dance piece. Choreographed by Juan “Coel” Rodriguez, dancers Brenda Grageda and Jessica Waitz danced on opposite sides of the paper airplanes. Sound artist Tony Obr laid down a soundtrack of pulsing, beat-driven noise that reminded me a lot of early Fuck Buttons and Black Dice music. It was noise that was harsh but also had a gliding feel, like listening to Neu! through shitty speakers. It was noise you could meditate or dance to.

Grageda and Waitz danced with dazed, intense expressions. Like they’ve been hypnotized or driven to the point of exhaustion. One of them sat in a chair, trying to lift herself using just her fingers; On the other side of the curtain, her scene partner furiously rubbed her hands together like she was trying to get them to combust. They execute a series of precise, fluid movements before moving around the curtain to switch sides. It added an interesting interactive component to the piece in that both dancers were performing different scenes simultaneously, forcing the viewer to pick where they would direct their focus. Eventually the two dancers met on one side, grabbing the airplane strands and bunching them together to form a paper airplane archway. 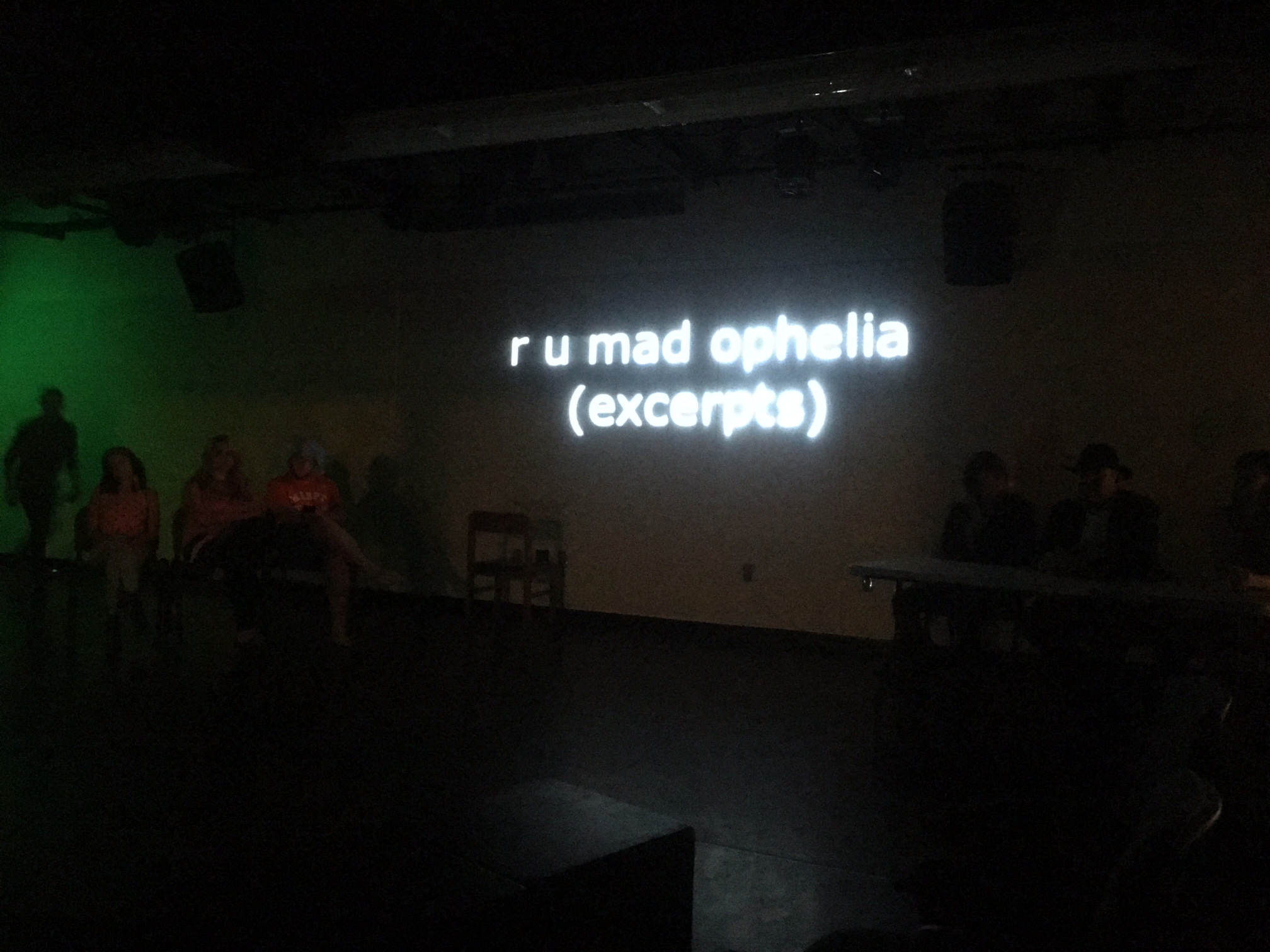 Following the dancers was an abridged performance of “r u mad ophelia”, a full length play recently put on by Howl Theatre Project. 6 actors were assembled onstage in sets of three, each of them wearing a goofy costume piece and spouting dialogue that was a hilarious mix of Valley Girl/Scottsdale Douche idioms and rambling profundities that would sound right at home in a Godard film. Nobody is better than Chris Danowski when it comes to writing characters who sound simultaneously vaucous and brilliant, airheaded yet in tune with the Godhead. He’s the only local playwright I know who could stage a show with the mock-cast of “How I Met Your Mother”, include an out-of-nowhere dance number set to Kate Bush’s “Wuthering Heights”, and randomly blast clips of “Sailor Moon” at the audience and have it all make some kind of daffy sense. 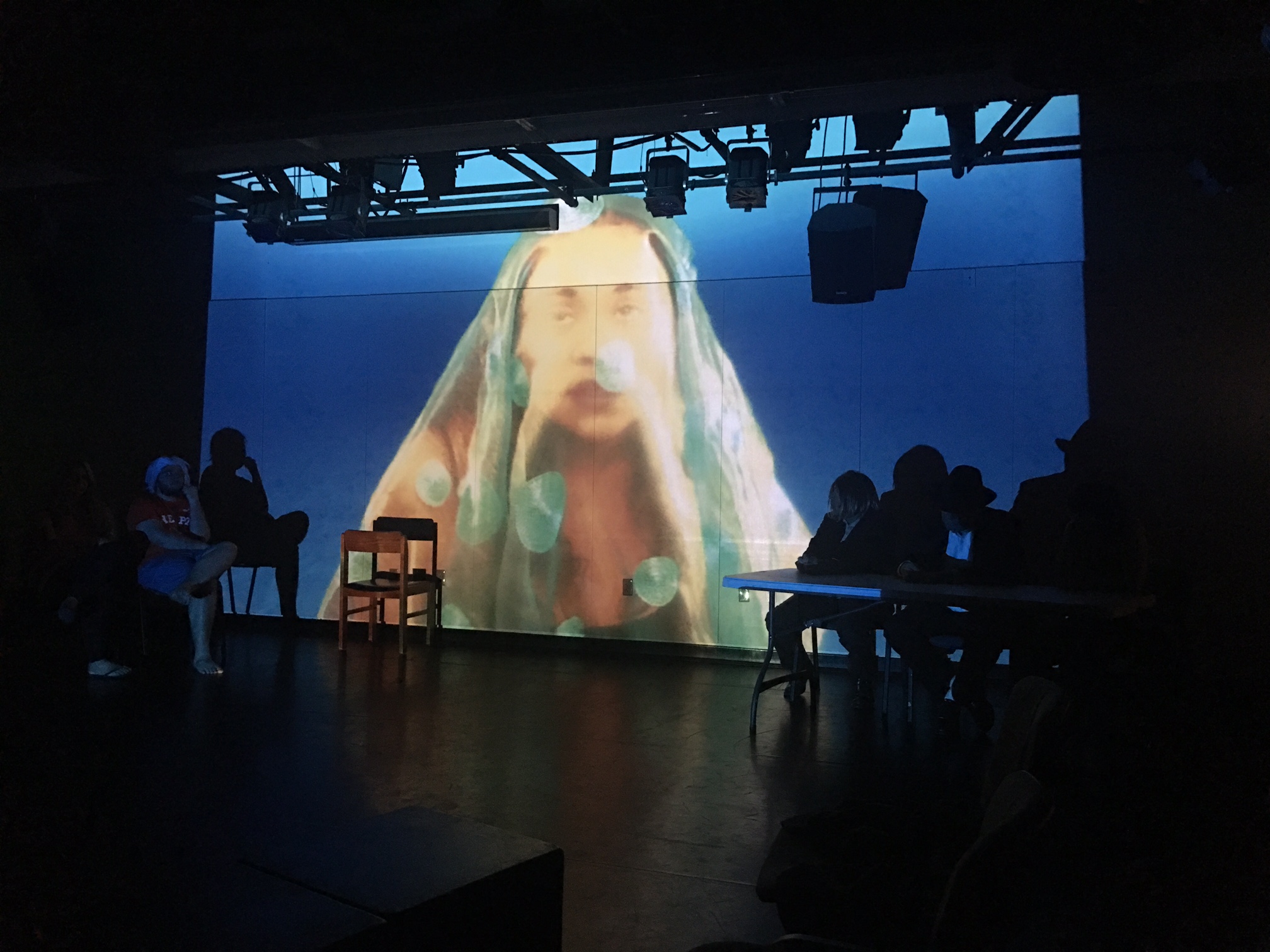 This abridgement of “ophelia” felt very much in line with his past work (no Kate Bush this time, unfortunately; a lil’ K.B. makes everything better), with an intriguing new wrinkle: The use of monologue video segments interspersed throughout the performance. While I’ve seen Danowski and other directors use video like this before, the use of special effects and weird filters gave them a strange dimension. One of the actors, Steve Wilcox, was morphed to look jagged, glassy and melting, like his skin was a dissolving Chihuly sculpture. Another performer spoke serenely while immersed underwater with what looked like clamshells or silver dollars affixed to her face. These videos, combined with the live performances in all their wiggy and weird glory, made me wish I had taken some shrooms beforehand. 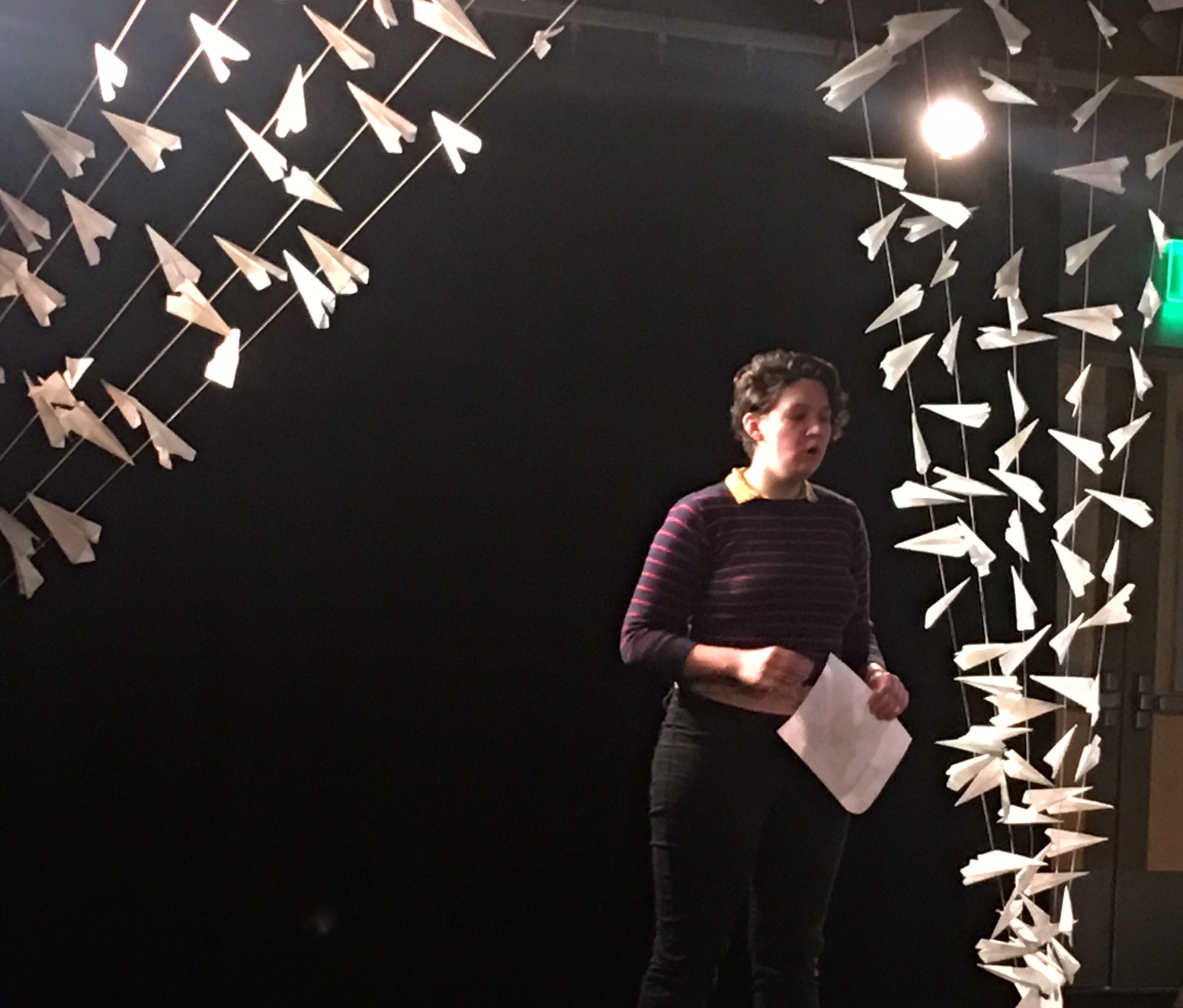 Closing out the night was a touring artist, Cynthia Spencer. Spencer hails from Olympia. She’s a “sound + poetry experimentalist”. Spencer performed selections from her new chapbook “girltramp”. It was unlike any spoken word performance I had ever seen before. Sometimes Spencer would read her rhythmic poetry straight off the page, but often times she would sing and howl the words a capella. Her voice would skip and chant the lines, mangling and expanding the words like the English language was a piece of bubblegum she was chewing and blowing up. Her approach reminded me of Sue Tompkins, singer for Life Without Buildings, and how her vocals tore up and flung words around with equal abandon.

The way she performed her pieces also made me think of that “deconstructed” cooking trend. The way she would emphasize and hurl certain words out divorced them from context. They just became words, freed from sentences, freed from verses. I felt like perhaps it was on me as the listener to put those words together myself, the way a deconstructed restaurant might set parmesan, a bottle of saunce, and a bowl of noodles in front of you and tell you to do it yourself.

I can’t say that everything I saw that night was a total success, but that’s the beauty of experimental art: It has room to fail because it’s trying to do something new. Kudos to Trunk Space, Four Chambers, and nueBox for putting this short experimental evening together. Here’s hoping they do another “menage art trois” in the future.