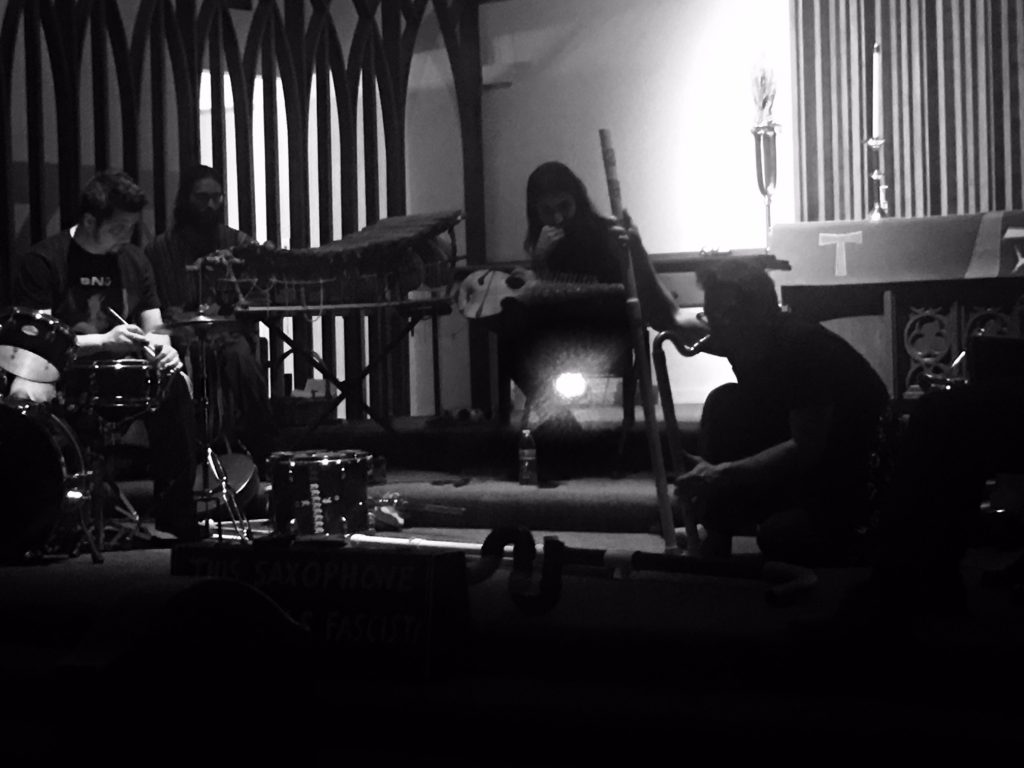 The music sounds like the trumpeting of an elephant god. I can picture Ganesh, the Remover of Obstacles, blasting a fierce noise through his trunk. A sound that’s loud, piercing, and deep; the kind of sound that can shake bones loose, pry open locked doors, and choreograph stampedes.

The music is sputtering and roaring out of Arrington de Dionyso’s sax. Barefooted and bespectacled, he’s wearing a long black coat that’s covered with silver lettering. The light inside Grace Lutheran Church’s Sanctuary reflects off the silver and makes it shimmer like moonlight bouncing off the scales of a fish.

Around the wailing sax man are five local musicians, heads cocked and listening intently to the music. There’s a traditional drum kit, a pair of hand drums, an instrument that looks like a giant wooden vibraphone carved out of pan pipes, and a stringed instrument that sounds like a cross between a zither and a guitar and looks like the spindly skeleton of something dredged out of the Marianas Trench. A black instrument case lies at the foot of the stage; written across it is the words “THIS SAXOPHONE KILLS FASCISTS.”

This Saxophone Kills Fascists is the name of de Dionyso’s new touring project, a spiritual free jazz protest against the harsh right turn this country’s taking. It’s also his way of chasing away the demons that have been haunting him since he got tangled up in last year’s bizarre Pizzagate scandal. 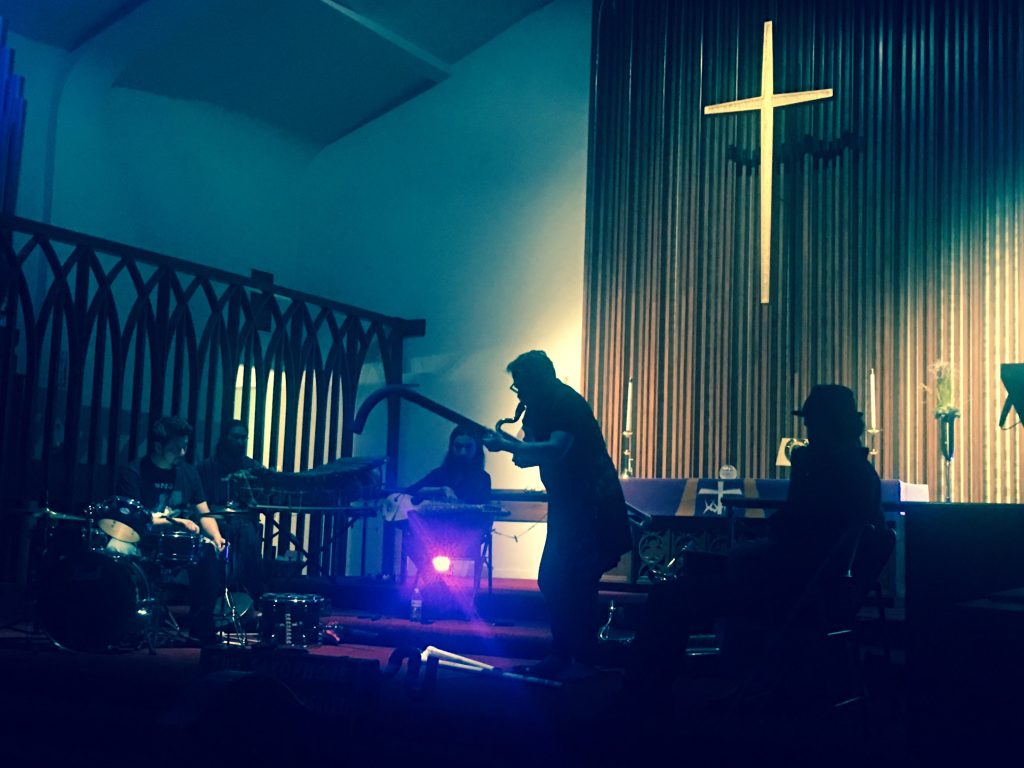 In every city This Saxophone Kills Fascists passes through, Arrington assembles an ensemble of local musicians to play with. His Trunk Space show was no different — the Old Time Relijun/Malaikat dan Singa frontman was playing with five strangers, with next to no rehearsal time.

What was captivating about the performance was that it SEEMED rehearsed. The collective were in sync, delivering a shifting 40 minute soundscape that flowed as naturally as air through lungs. At times, the music got so manic and energetic that it made me think of Raymond Scott’s Looney Tunes scores. 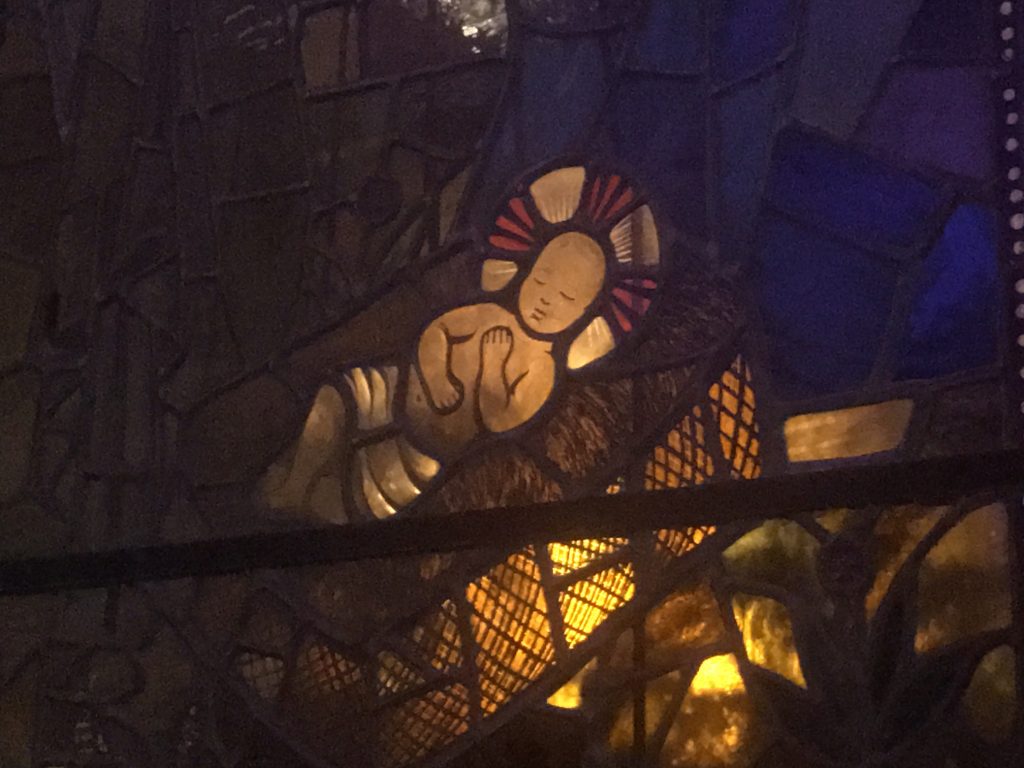 Halfway through the set, Arrington’s sax started to make a series of insistent blurts that sounded like the sinister stalking music from “Jaws”. The percussion and stringed instruments played a slow and hypnotic rhythm, acting as the choppy waters the apex predator swam through. And then the sax abruptly cut out, leaving the drums to take over as Arrington sat on his knees. Perhaps he was as hypnotized by their beats as we were.

Towards the end of the performance, after switching between two different saxophones, Arrington started playing a series of instruments that sounded like saxophones but looked like they fell out of a Dr. Seuss book. Cobbled together from what looked like vacuum cleaner tubes and PVC pipes, they had a strikingly resonant sound. He played these odd looking instruments for a spell, before retiring them for some kind of flute, ending the show with a circling, pastoral refrain.

What struck me about the performance was the sense of control. Free jazz and improvisational music often sounds like it’s about to dissolve at any moment, like a rickety car barreling down the highway at over 100 mph. You see pieces flying off and you hope to God the rest of it hangs together until the end. While the performance often went in chaotic and dissonant directions, I never got the sense that anyone onstage was flailing or raging.

It was powerful music that called out to powerful forces, not in a beseeching way but in the way that one equal speaks to another. They had come to play inside a house of God, kicking up a big enough ruckus to keep the Big Man up. After all, if we can’t sleep easy these days, why should He? 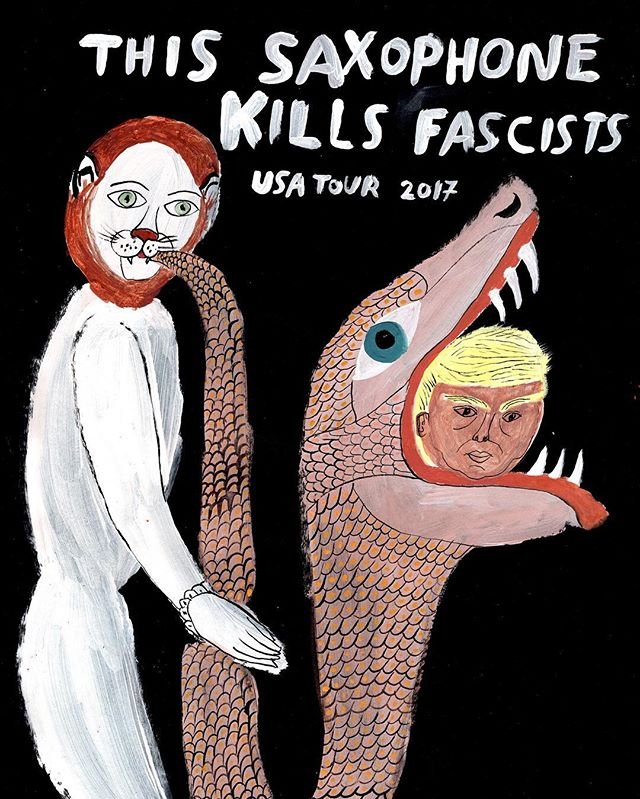