One Day Your Ears Will Ache Like Mine Ache: The Body & Full of Hell at 51 West 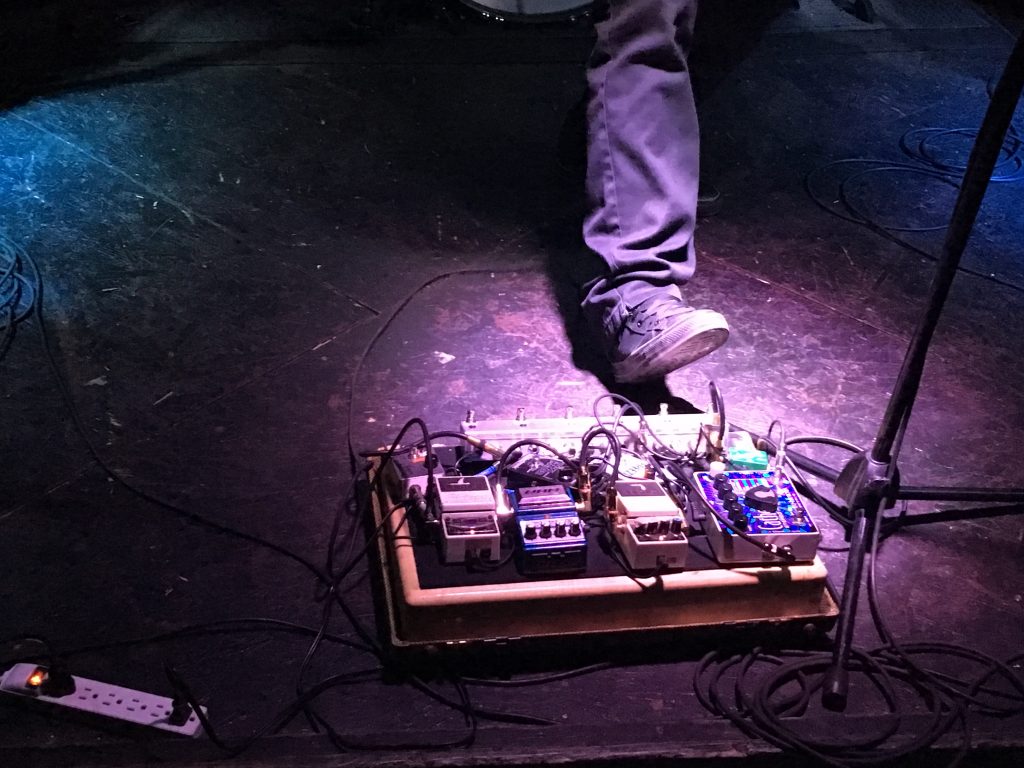 All fotos by author

I’m waiting inside 51 West for the show to start, standing with my people. I don’t know any of them by sight or name, but they are my people nevertheless. They are the tribe of wallflowers, leaning on their ancestral home: The wall across from the stage. Their pale faces are illuminated in blue or yellow light cast by the screens on their phones. With the exception of yours truly, they are all wearing baseball caps and spectacles. They are also unshaven and lack dates; I guess I’m not so different from them after all.

I cast my eyes up at the ceiling of 51 West. It’s like staring into the exposed rib cage of an autopsied building. Above our heads is a lattice of thin iron beams, and behind these cold ribs are silvery insulation pipes coiled like intestines. Wires wrap around pipes and wood beams like veins tangled on bones. In the small front lobby area, a single lightbulb hangs over the ticket table. It reminds me of the bulb swinging over Norman’s mother in the Bates basement. All I can think about inside this sparse venue is anatomy and bones, bodies and death. I’m not morbid by nature: I’m just getting into the spirit of things to see The Body & Full of Hell play their gnarled, apocalyptic collaboration “One Day You Will Ache Like I Ache”.

The first band to play is Gale. They’re a thunderously loud metal four piece. One of the guitarists and the drummer trade off on vocals. From where I’m standing in the crowd, whenever the guitarist singer stands in front of the drums the drummer vanishes entirely from view. On the songs where the drummer sings, the vocals sound disembodied and pre-recorded as the band thrashed with brutal intent. As I watched this unintentional vanishing act play out, I wondered if any metal bands had ever tried doing a crossover with that most unholy of performing arts: ventriloquism. Imagine a wooden dummy with corpse-paint and spiked wristbands shrieking bloody murder about Nordic death gods while the “real” singer nonchalantly drinks a tall glass of bourbon behind him. 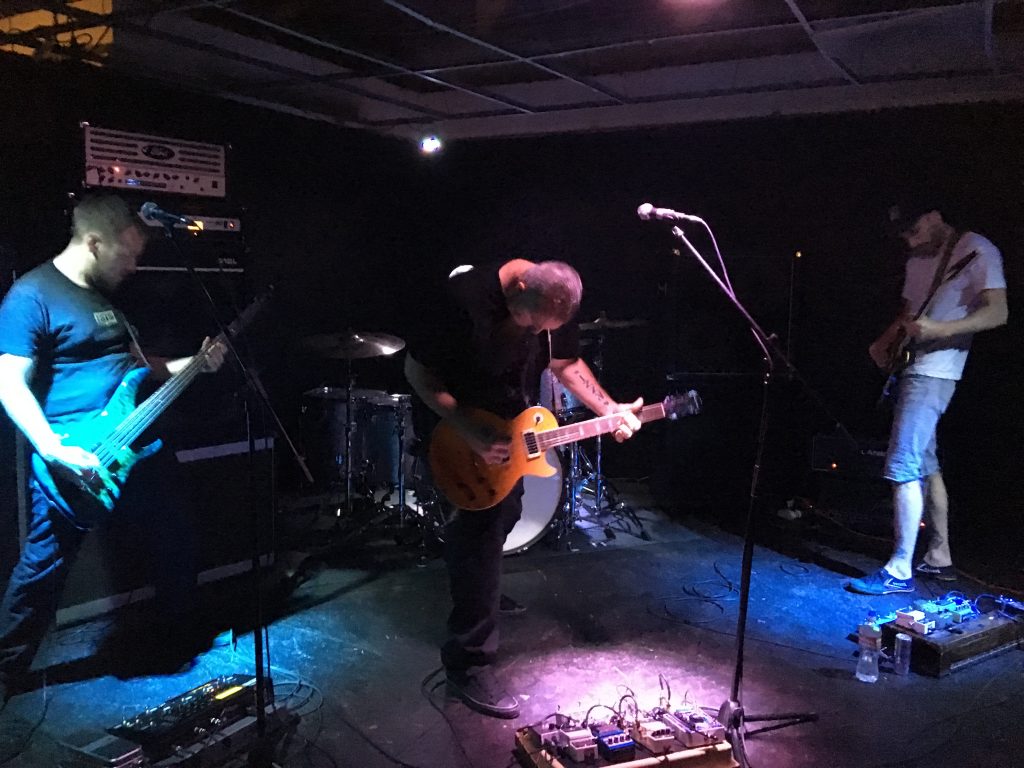 Gale play a solid set. It’s hard to distinguish individual songs within the cramped, rumbling ball of sound they make onstage. It does what heavy music does best: It creates vibrations so powerful I can feel my clothes shake and pressure build in my guts. The band is all rock and no talk: They attack their instruments with cold purpose. They look as intent as a crew of men would look while building a suspension bridge in mid-air or trying to wire up the Hadron Collider.

51 West fills up with bodies. The room becomes permeated with the smells of sweat, cigarettes, the occasional fart, and the distinct aroma of stale beer that was no doubt shotgunned in the parking lot minutes ago. And as soon as the bands stop playing, all these bodies melt back onto the sidewalk. There’s only a few of us bumming around in here right now. I take out my earplugs and head over to The Body’s merch table, where I buy a tape and patch. The merch guy, his face partially obscured by long scraggly black hair, seems like a pretty nice dude. Sitting nearby, a man with a broken finger talks about his favorite death metal shows to a girl who keeps talking about her cat named Cheeto. I put my earplugs back in, but it does no good: I can still hear them. 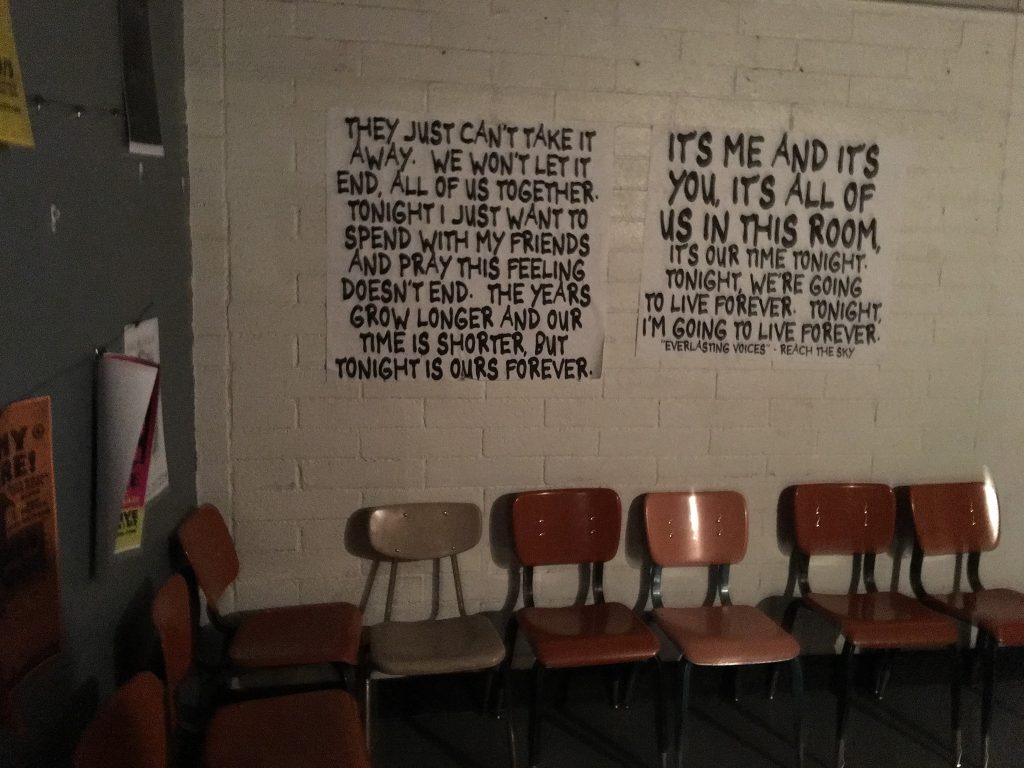 Genital Stigmata is a one man noise machine. He hunches over two tables loaded with chained pedals and noisemakers, wearing a Swallowing Bile T-shirt and a grim expression. He cues up a vocal sample: It’s a breathy woman talking to “an average man… with un-average thoughts”, taunting him about the fantasies he must be having about cross-dressing after seeing a pair of panties on a mannequin. The noise starts to kick in as the voice goes on about “sexy girl panties” and lingerie until the noise drowns out the sample… and everything else, for that matter.

The best way I can describe Genital Stigmata’s set is to tell you the images that the harsh rumbling, hissing, and rattling noises his electronics inspired in me. As he played, I imagined a massive earthquake ripping a hi-tech city apart. Maybe Tokyo or Menlo Park. I saw a highway get split in half, and out of that split road emerged a gigantic rattlesnake’s tail as tall as a skyscraper. All around the split highway was pedestrians plummeting to their deaths, smart cars getting swatted left and right by the giant tail, shards of glass and hopeless screams filling the air, bursts of emergency radio calls going unanswered, everything being torn asunder by that unending harsh metallic rattling noise and then- Silence. He switches off his setup. The crowd files outside and I’m left to wonder what Freudian significance might lie in hallucinating about gigantic rattlesnake tails. 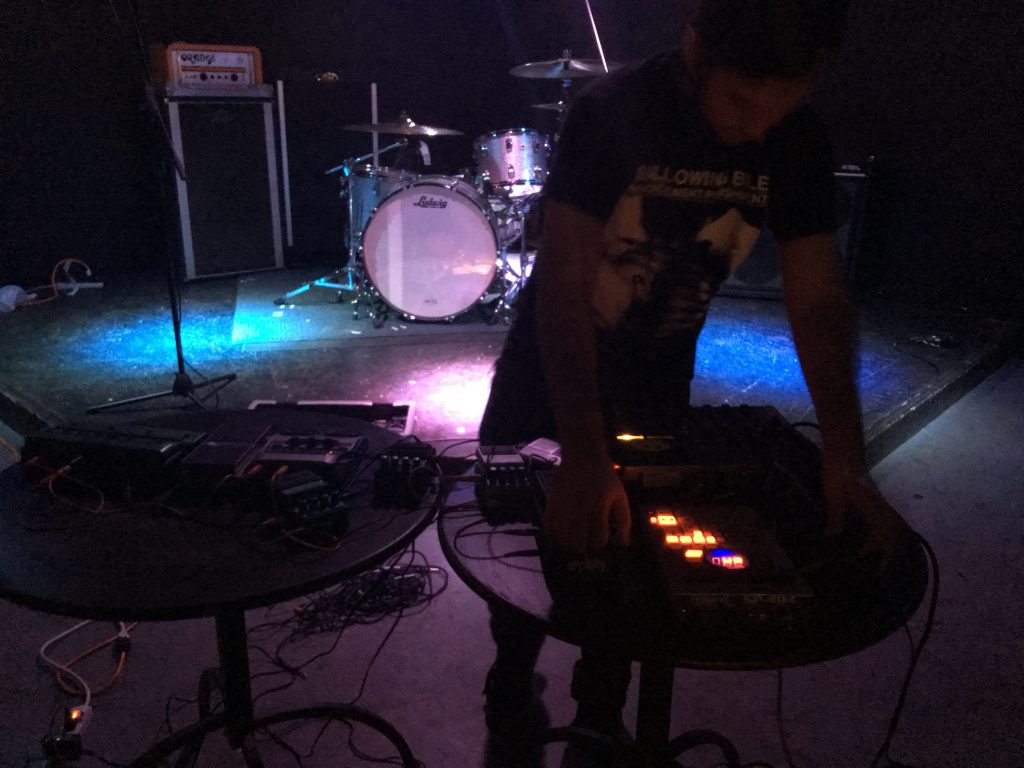 If you played a drinking game in which you took a shot every time you saw someone wearing a black shirt here, you would be dead in less than 10 minutes. Why is black such a popular color at extreme shows? Is it because of the color’s association with darkness, death, and evil? Is it because black pairs well with everything else? Is it because black hides the funky pit stains you’ll get from standing around in an all-ages venue with more bodies in it than the A/C can probably handle? Is it to conceal any spilled blood from elbow checks or eating the floor during raucous sets? Or is it to hide the cumstains on your shirt after you hear that PERFECT guitar tone and lose it completely because it makes you feel like your soul is being fellated by the mercury-lined throat of the Angel of Death? Probably all of the above, I’d guess. 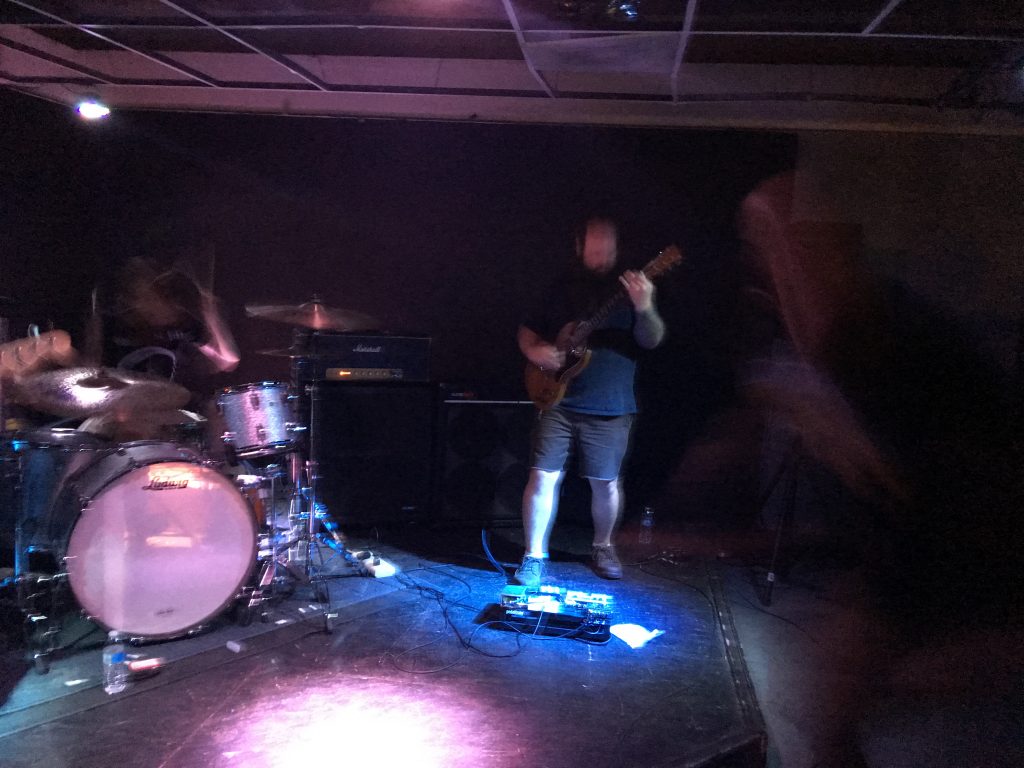 Next up is Languish, a thrashy and hard-hitting group. Whereas Gale and Genital Stigmata played sets that were slow and smothering in their intensity, Languish played a faster style of metal. You could see this different level of energy in their lead singer, who stayed offstage and prowled directly in front of the crowd, trailing a long microphone cable behind him as he roared and howled into the mic. He was like a human junkyard dog pacing back and forth across his turf, the long cable behind him the chain keeping him from tearing our throats out.

It’s a good thing he had such a fearsome and energetic presence because his vocals were completely inaudible. It probably wasn’t his fault: You could see veins popping on his bald head. He was giving it his all: We just couldn’t hear it. It may have just been a bad microphone or an off sound mix. I could occasionally hear a rasping voice above the din of speed metal drums and screeching guitars, but just for a few seconds at a time. Credit where credit is due: Even if the singer was basically mute for their whole set, they were fun to watch as a whole and played music you could bang your head to. What more could you want from a group with a name like Languish? 10 minute harp solos? A concept album about the 5th circle of Hell? A split EP with a gothic slam poet named Despair? This will do just fine, thanks.

Hands down the weirdest thing I’ve seen here is the guy wearing a Modern Lovers shirt. Don’t get me wrong: I adore Jonathan Richman. It’s just hard to think of anyone who’s less metal or extreme than the singer of “I’m Straight” and “Roadrunner”. It does make me wonder, though, if the guys who founded Roadrunner Records were secret Modern Lovers fans. Maybe that’s the real story behind their label: They started up with the sweet, twee dream of one day putting out Richman records, and then got sidetracked with all that Sepultura and Slipknot money and lost the plot. Ah, what a better world that would have been to live in.

But really, though: Who wears a Modern Lovers shirt to a noise metal show?

The answer: Lee Buford from The Body. When I saw Mr. Modern Lover step up behind The Body’s setup and pick up a pair of drumsticks, I could feel my jaw drop. The two bands took the stage and made for an interesting match-up: Both gents from The Body are big, burly dudes who are fairly well on in years. Maybe not quite elder statesmen age-wise, but close. The guys in Full of Hell looked like they finally got let out from their rehearsal space underneath a cruel aunt’s staircase and were ready to tear shit up. The two groups Voltroned together to create an astonishing and unholy racket. The Body sang with surprisingly high voices, like little girls singing from the bottom of a well in Hell. Full of Hell had deep, harsh vocals that played off well with that contrast. The packed venue closed in tight towards them as they played furiously, doing a short but deeply satisfying set in which they conjured up noise so primal it felt like the ground was about to crumble beneath our feet. 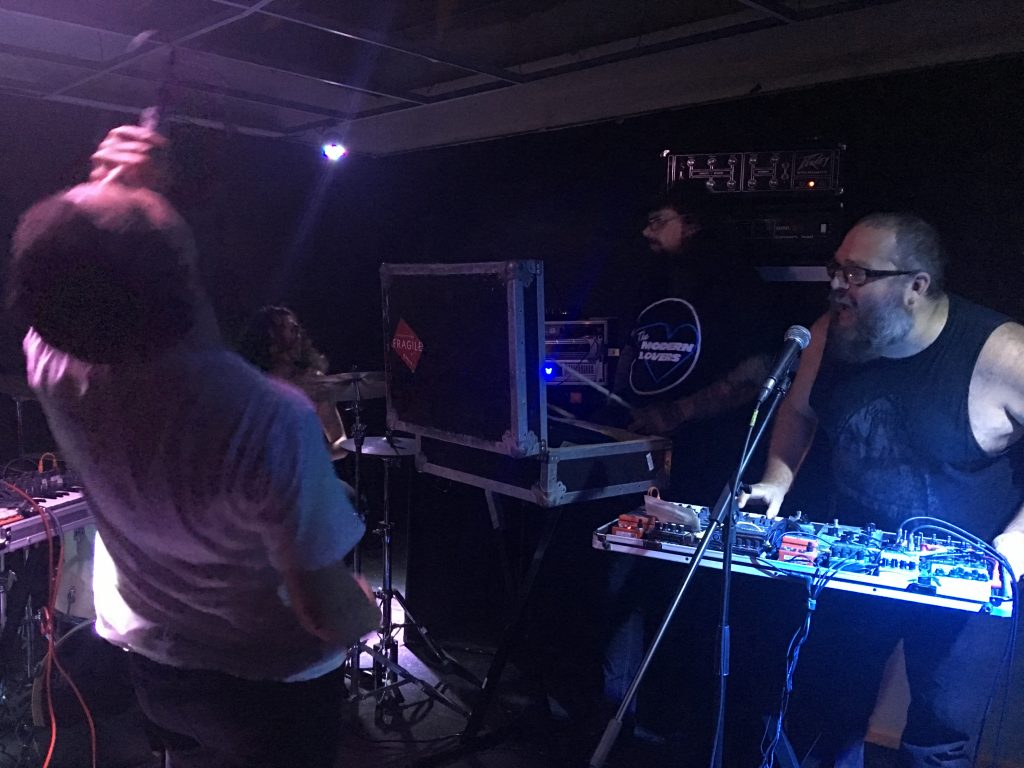 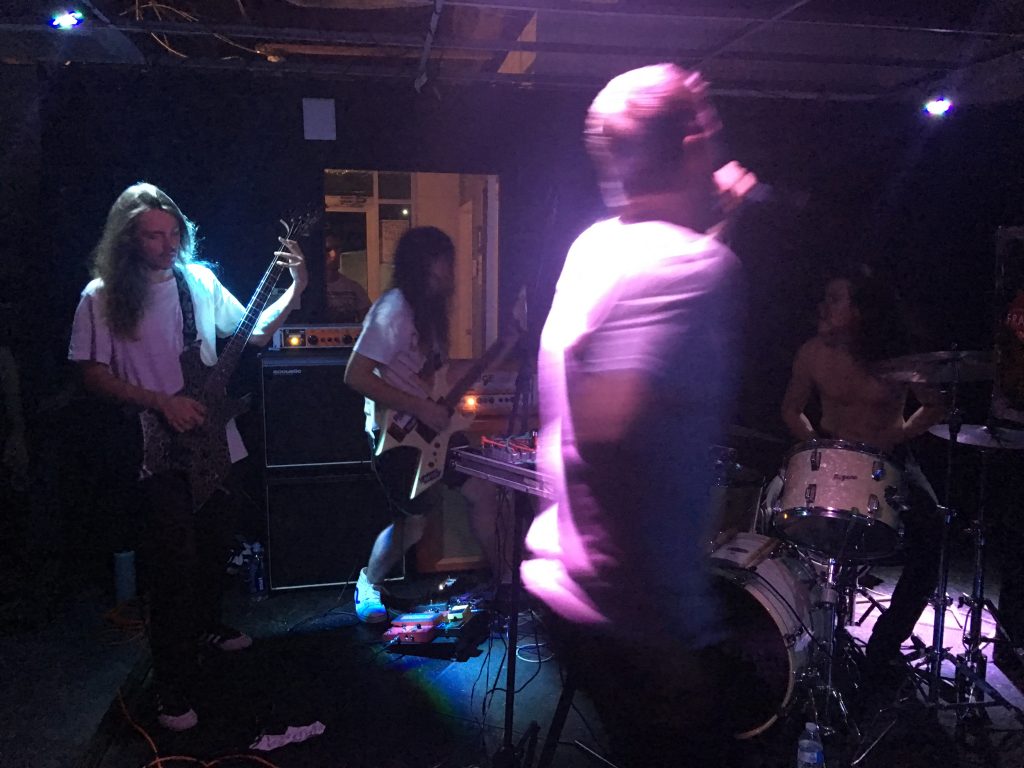 The Body & Full of Hell

Halfway through their set, things took an interesting turn when the lead singer for Full of Hell set his mic on the ground to play with some electronics. The nice merch dude with the long scraggly black hair rushed the stage and started whipping the mic with a chain! He grabbed the mic and lurched back and forth wildly in front of the crowd, violently whipping the lip of the stage with his chain. The chain whipped back on several occasions into the crowd, narrowly missing people’s faces. As the flagellation continued, the audience retreated, giving the chain man as wide a berth as possible. Eventually he dropped the mic and stormed off. Both bands had been playing music without missing a beat the entire time. It’s hard to tell if that was supposed to be a part of the show or some sort of violent improv: The faces of the men onstage give nothing away.

The set ends and the mass exodus towards the parking lot begins. I see the chain man behind the merch table. I’m tempted to go up and ask him if that was a part of their act or not, but I decided it’d be more fun to not know and let it be a mystery. Out on the sidewalk, pushing through a wall of cigarette smoke, I take out the earplugs I’ve been wearing for most of the night. Even with the plugs in, my ears ache from the night’s offerings. It’s a good ache, though. The kind that blows the cobwebs off your brain and eardrums. Hopefully one day your ears will ache like mine ache.