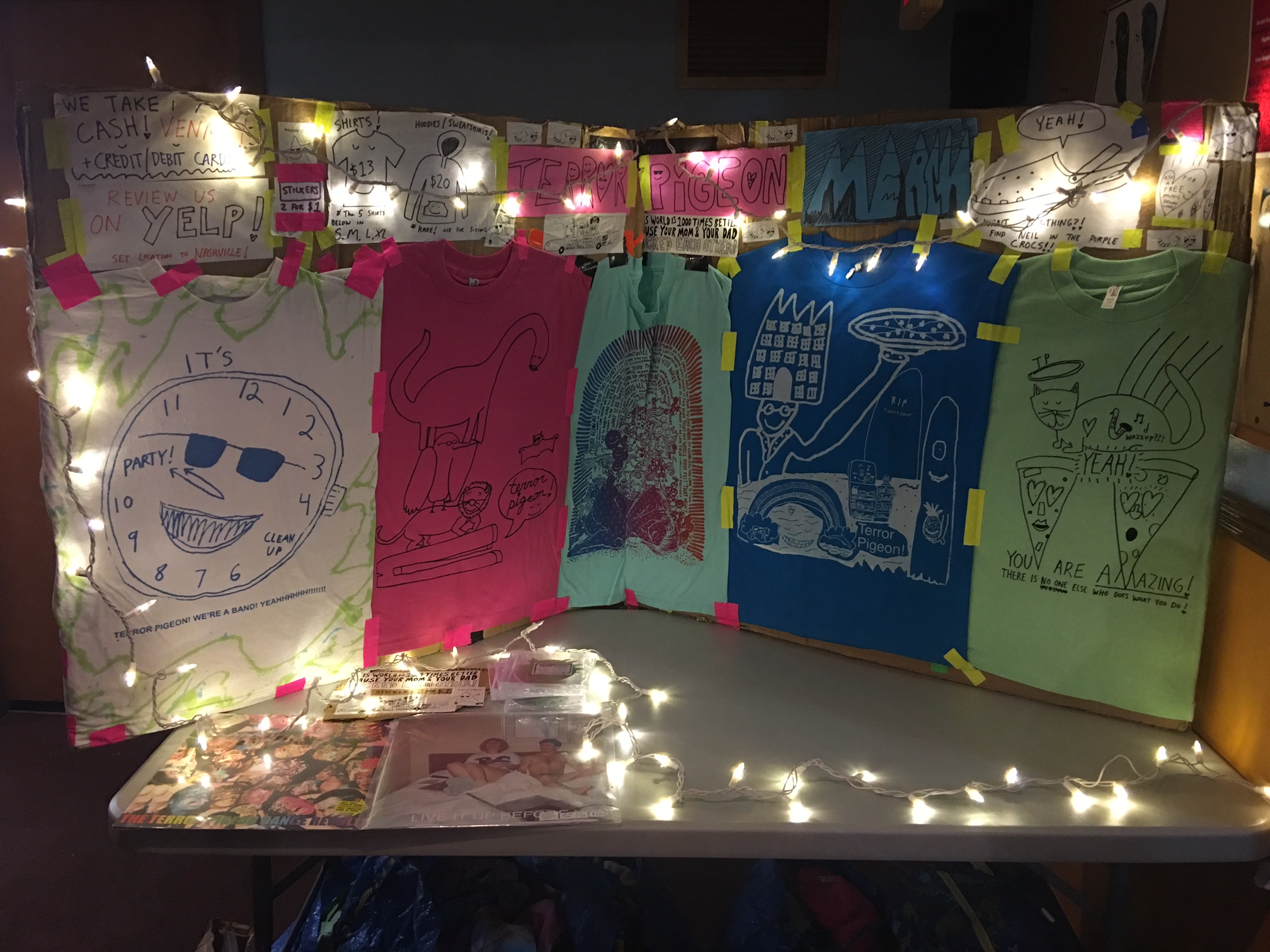 Clouds are drifting across the walls of The Trunk Space. Neil Fridd (aka Terror Pigeon) is testing the projections for his set before the show begins. Undulating overhead is a white sheet clamped to the speakers. Fellow touring artists Curt Oren and Tomboi are loading in. The venue fills with the musky, unmistakable smell of musicians who’ve been living in their cars for weeks on end.

Opening the show is local solo artist E Alo. Bespectacled and hunched over her synths, she plays a set of fun and beautiful electronic music. It’s music that effortlessly shifts gears from bubbly and energetic to ambient and woozy. Her music sounds like what would happen if Brian Eno and Flume collaborated on an anime soundtrack. 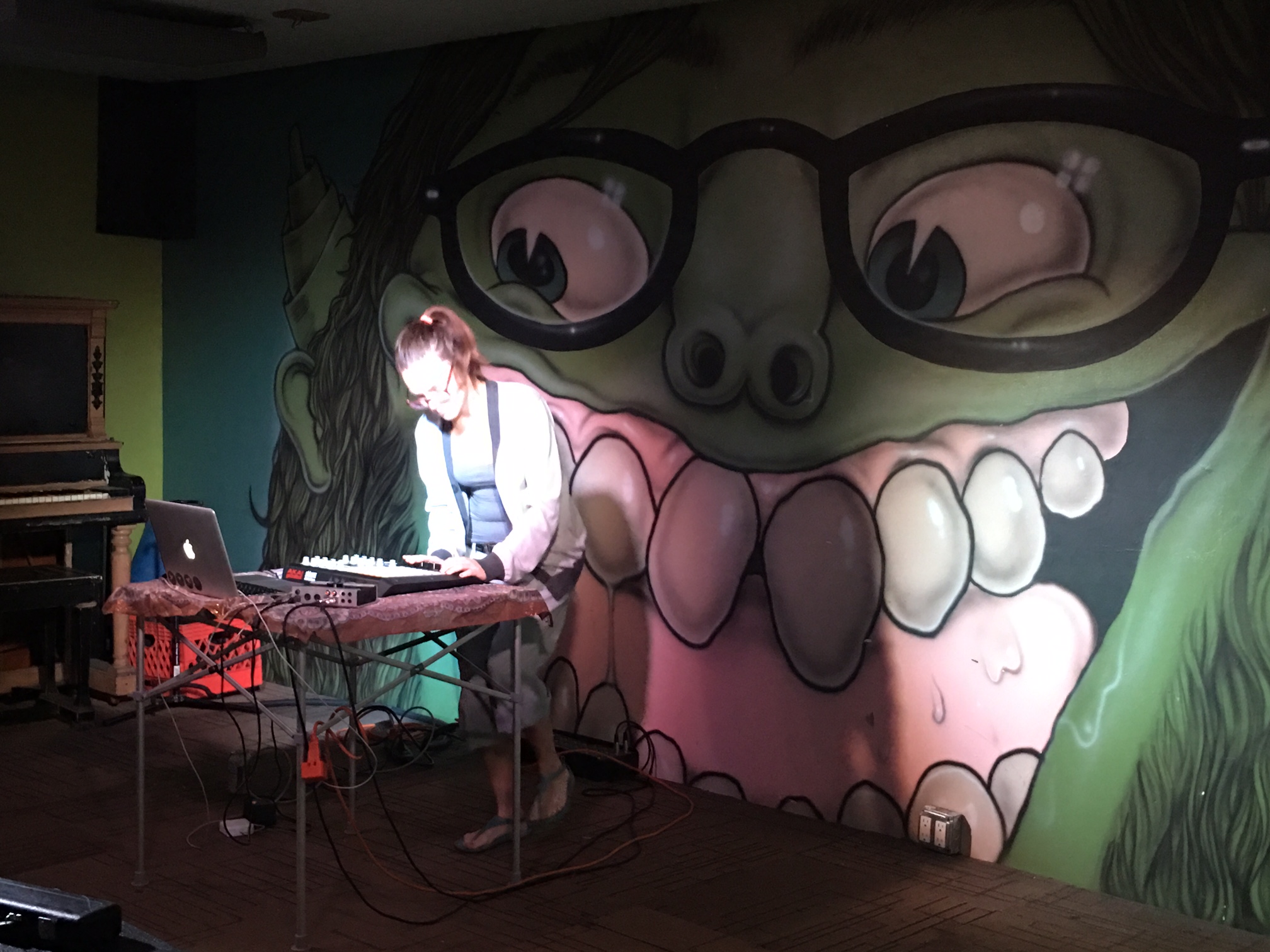 After her performance, DJ DJ Tanner (aka Abe from T-Mammal) starts the first of several brief DJ sets throughout the night. Having Abe do his thing between acts is canny booking – it gives the whole evening a feeling of constant momentum, with none of the dreaded dead air that comes from standing around waiting for bands to set up. 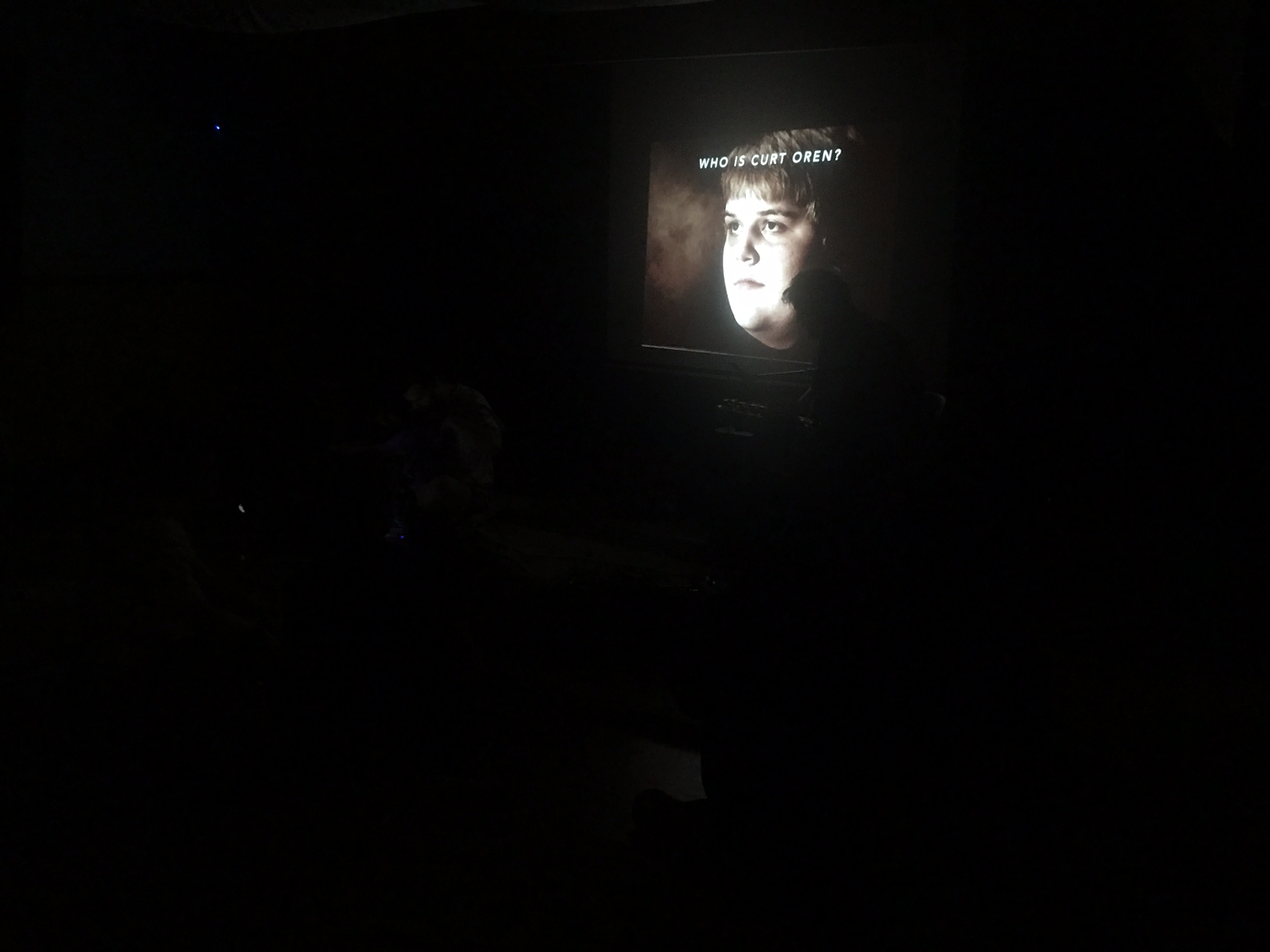 “Are you religious?,” a stranger asks me while I’m waiting for the next band to start. The question catches me off-guard; the guy’s intense, blank stare puts me on edge. It’s a complicated question, but I give him a simple answer: “no.” Some nights telling the truth is more trouble than it’s worth.

Curt Oren takes the stage, playing a mix of tunes that range from acoustic guitar songs to skronkin’ saxophone blowouts. His set is fascinating. Oren has a projector setup- he does a slideshow between songs that is achingly, beautifully earnest. I’ve seen this kind of presentation before at Fringe Festival shows, where performers like Kevin Thornton will tell personal stories in between songs. But none of those other performers used a slideshow format or possessed Oren’s ruthless candor (it’s hard to imagine most folks be willing to admit they used to be a bed-wetter).

The screen would get lit up with hilariously self-effacing bullet points like “Sensitive White Male” and “Wife: Where is She?”. He also used the screen to give shout outs to personal heroes and people that he thought we should know about, like ex-Phoenix artist R.Ariel and activists Shaun King & Sarah Kendzior. Oren would also use his projections as a musical partner, using rapid-fire cuts and glitchy sound editing from the projector to play off of his sax work. He also did a flute piece where he led the audience in a meditation, asking them to inhale and exhale in time with his playing.

It was a clever, engrossing set… that almost got ruined by Mr. “Are you religious?” The dude heckled Oren throughout his set by asking him questions, sometimes even shouting out questions WHILE THE GUY WAS PLAYING MUSIC (one particularly egregious moment was when the jackass asked “What does this have to do with toxic masculinity?” while Oren was leading the audience through the flute meditation). It was hard to tell if the guy was being a dick on purpose, or if perhaps he was zonked out of his head on something or on the spectrum; maybe he just didn’t understand that he was wiping his ass with the social contract.

Credit where it’s due: Oren handled it like a champ. He didn’t lose his cool once during the set and took the guy’s poorly timed blurts in stride. Props are also due for the folks in the attendance who shut him down when he wouldn’t stop talking. 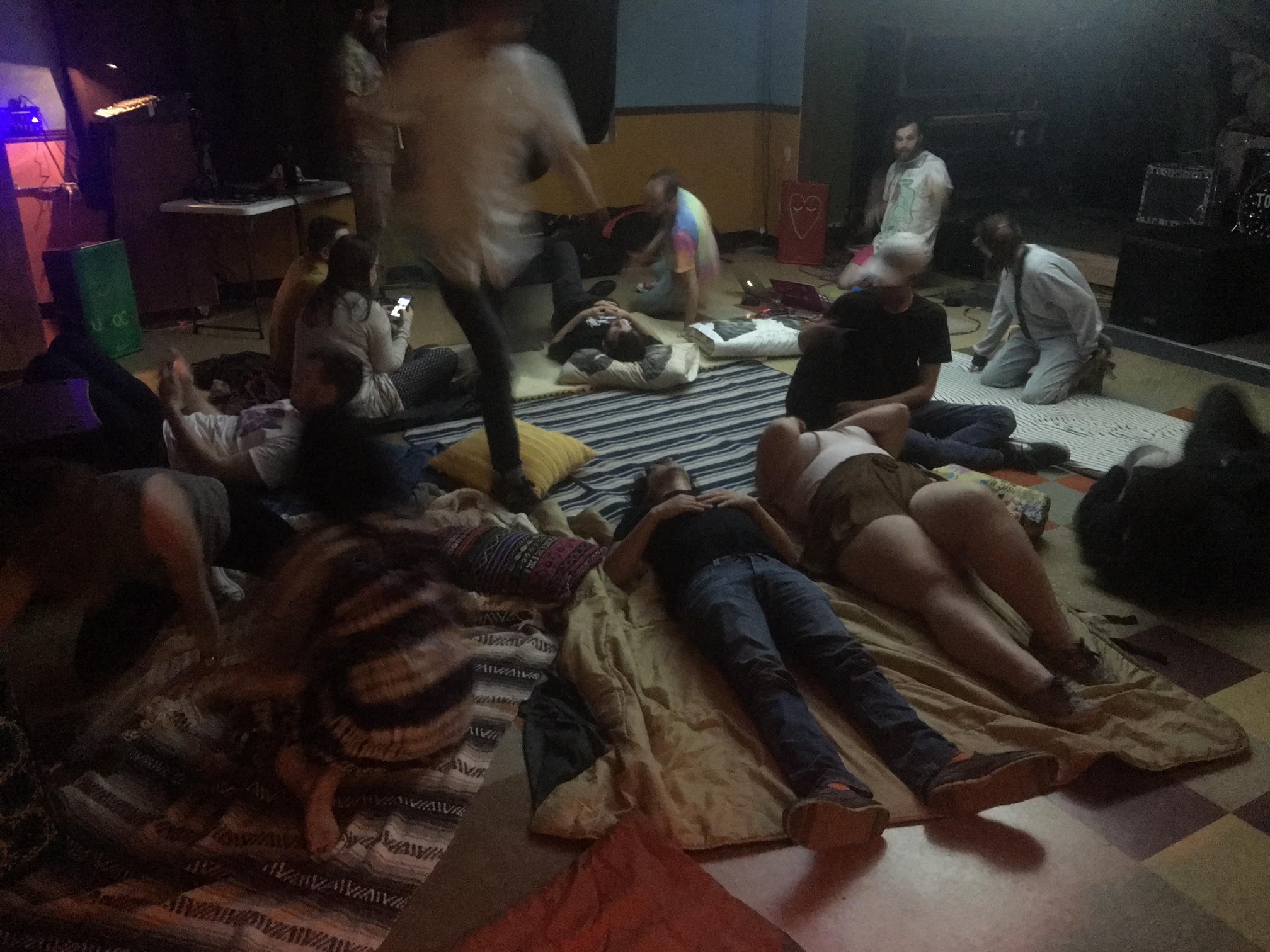 The floor of the Trunk Space is lined with blankets and padding for Terror Pigeon’s set. Fridd tells the audience that they should aim their heads towards the center of the room while they’re lying down. This is a special performance: Terror Pigeon’s Surround Sound Lay Down. Fridd’s surrounded the room with a ring of speakers, set to play a set of music that’s been specifically designed for a prone audience to listen to.

Finding a place to lie down is a challenge, but I’m able to snag a space in the center of the lay down. Fridd uses the white sheet hanging over us as a projection screen, firing up a series of images that flicker over our heads throughout his nearly half hour long set. The images vary from flowers blooming to bursts of lava, stars twinkling in the night sky to B&W footage of old Astro Boy cartoons. From where I’m lying down, the images are upside down, which makes them even more surreal. The sheet they’re being projected on is riddled with creases and wrinkles. It addes an interesting physical texture to the images, making them look as though they were being projected onto a sheet of cracked ice. 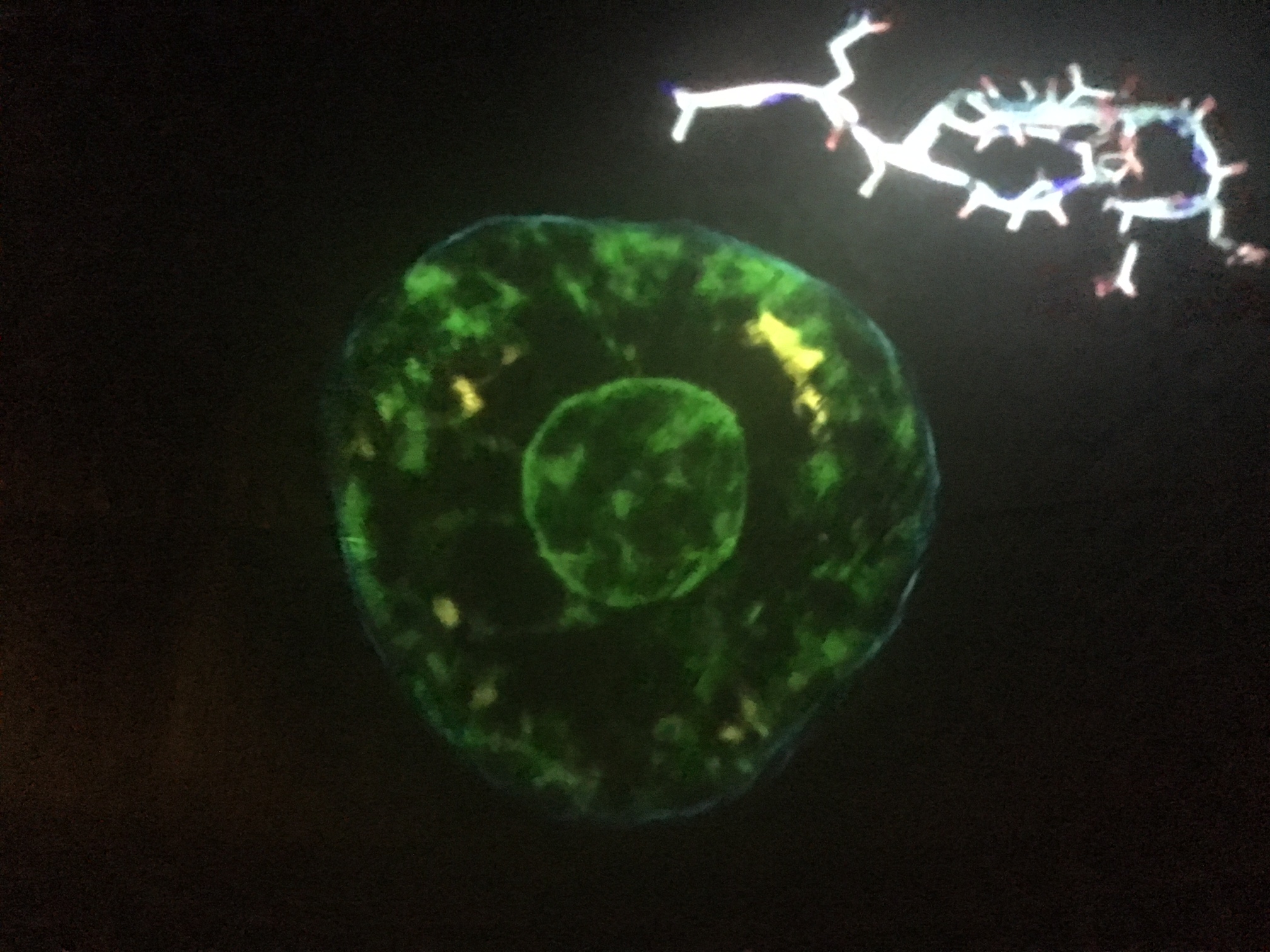 Listening to music on the floor is a deeply physical experience. You FEEL the music- it pulses, vibrates, and shakes you. Bass lines and beats caress and knead your flesh. The location of the sound itself becomes more noticeable, too. I could feel and hear the sound darting from speaker to speaker, like it was an animal circling around us. The music almost felt like a solid that was just out of reach, a thing we could touch if we could just get our hands in the way of its channel.

The music itself was an interesting blend of pre-recorded guitars, open-hearted romanticism, and synthetic sounds. At times it reminded me of the Smashing Pumpkins’ “Adore” phase. You’d think that music made for an audience lying on the floor would be relatively sedate, but there were intense passages. Moments that flirted with outright noise. There were also songs that had some of Terror Pigeon’s dance magic in them, bouncy enough that I couldn’t help bobbing my head and tapping a rhythm on my chest. 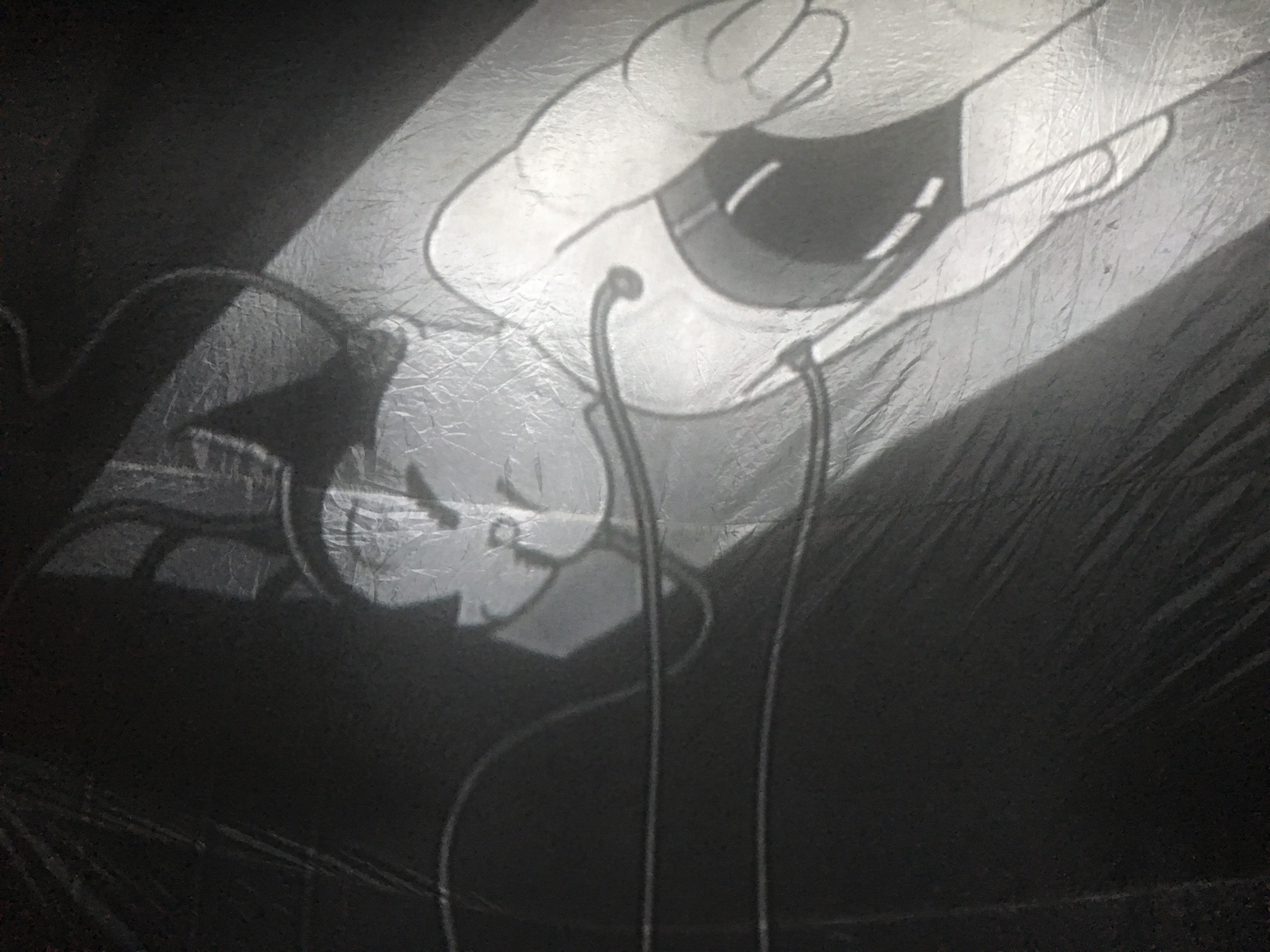 Terror Pigeon’s music, combined with the swirling visuals and unusual “seating arrangement”, created a one-of-a-kind experience. I felt like the music was a bed of soil, and my consciousness was rising and growing out of it, blooming into something fuller and more present in the world. It was as much a trance state as it was a concert. After his set was done, as we all rose to our feet, an audience member asked Fridd if he planned to release this show on DVD someday. He said ‘no’; this tour was it. Which made me feel both profoundly grateful that I got to experience it, and sad knowing that so many people won’t get to know what this was like. My words don’t do it justice. 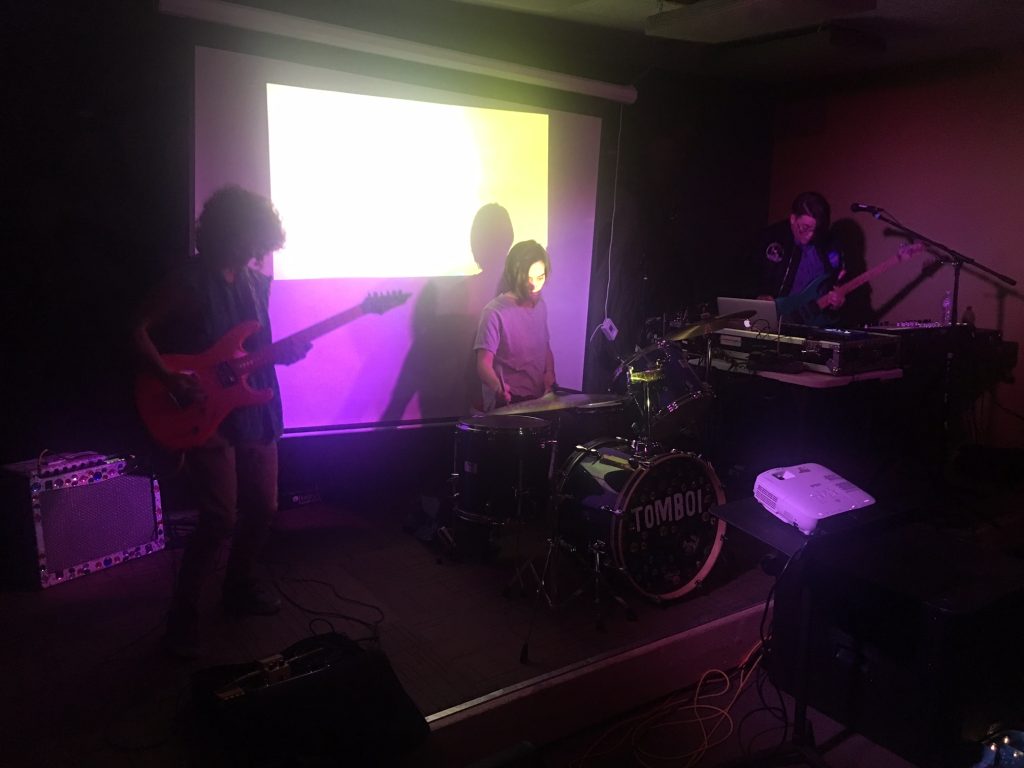 Surround Sound Lay Down would be a tough act to follow, but Tomboi is up to the challenge. A three-piece, they play their set in front of a projection screen that intercuts live digital art with prerecorded imagery. The band members get warped and lit up on the screen in sunbursts and fractals. Their guitarist plays a six string that’s the color of a pink Peeps, while the drummer pounds out beguiling rhythms on a bedazzled drum kit. The trio is rounded out by their singer, who alternates between electronics and guitar.

The singer’s vocals sound treated and processed. She sounds like an emotive cyborg, singing over tracks that are moody and sultry. Their electronica sound is beautiful and deceptively low-key- it sneaks up on you, like a cat. They close their set with a great cover of Aaliyah’s immortal “Are You That Somebody?” followed by a head-nod inducing original tune. 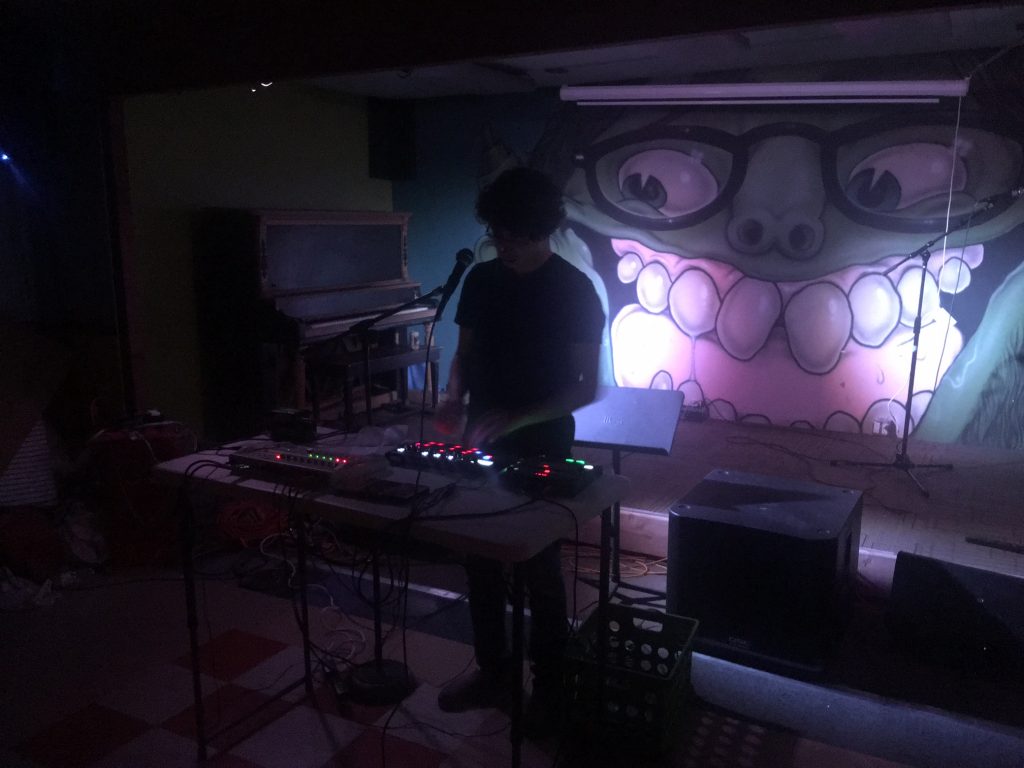 The show ended with another local solo performer, Gimpheart. He gave it his all, singing over an array of electronics, in spite of some wonky sound issues. It was a good set, but it felt like an anticlimax after the staggering triple threat of Oren, Pigeon, and Tomboi.

I’ve seen lots of great shows at The Trunk Space over the years, and this evening is worthy of joining that hallowed list. Everybody came to the show looking to blow us away with sound AND vision. It’s the sort of show that leaves you buzzing with hope- not just for the state of music, or the state of local culture in general, but hope for the future. That life on this Earth can be glorious, no matter how bleak our collective futures look.

It’s like Terror Pigeon sang: “You are worthy of love/all of the time.” 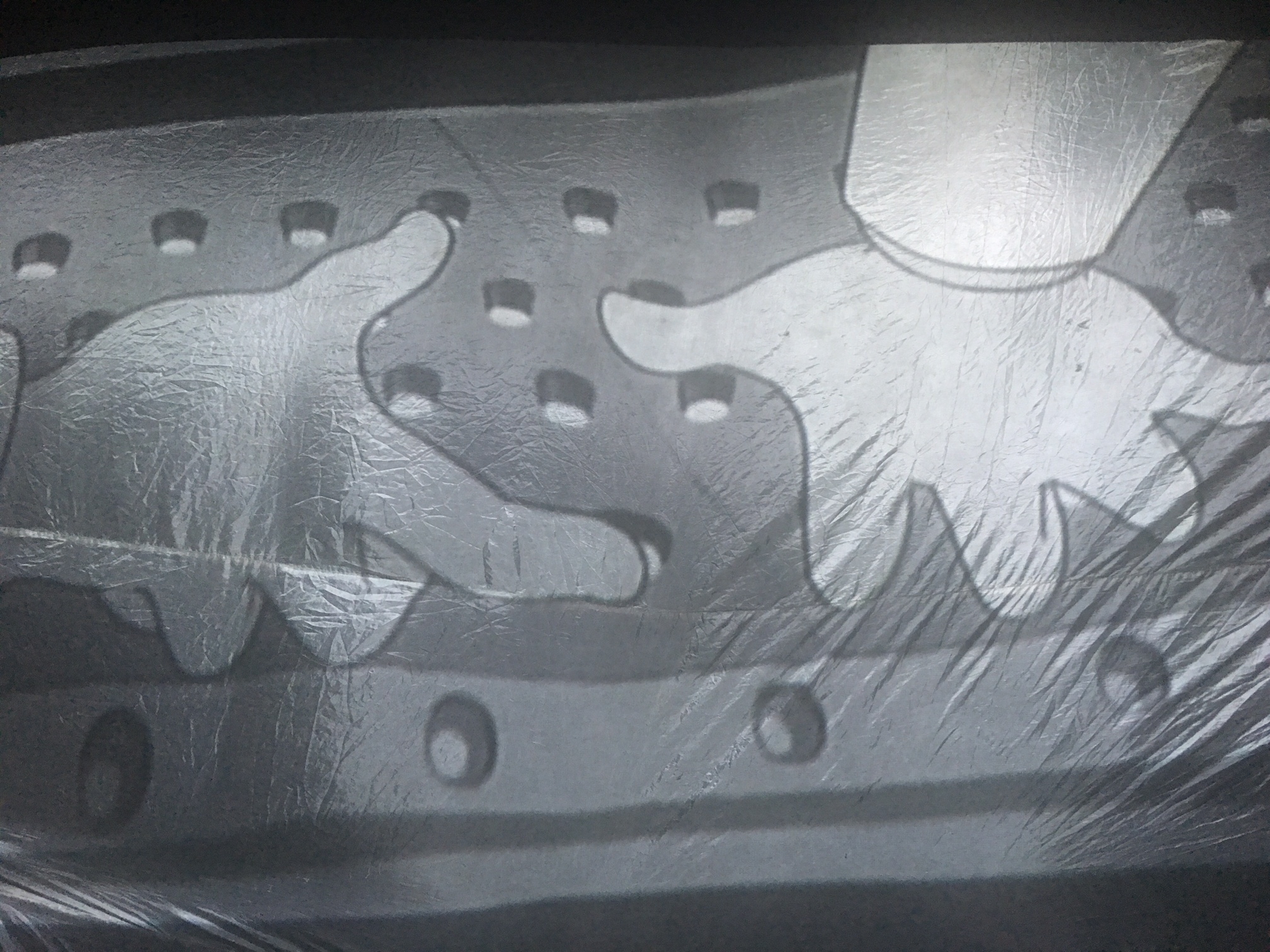