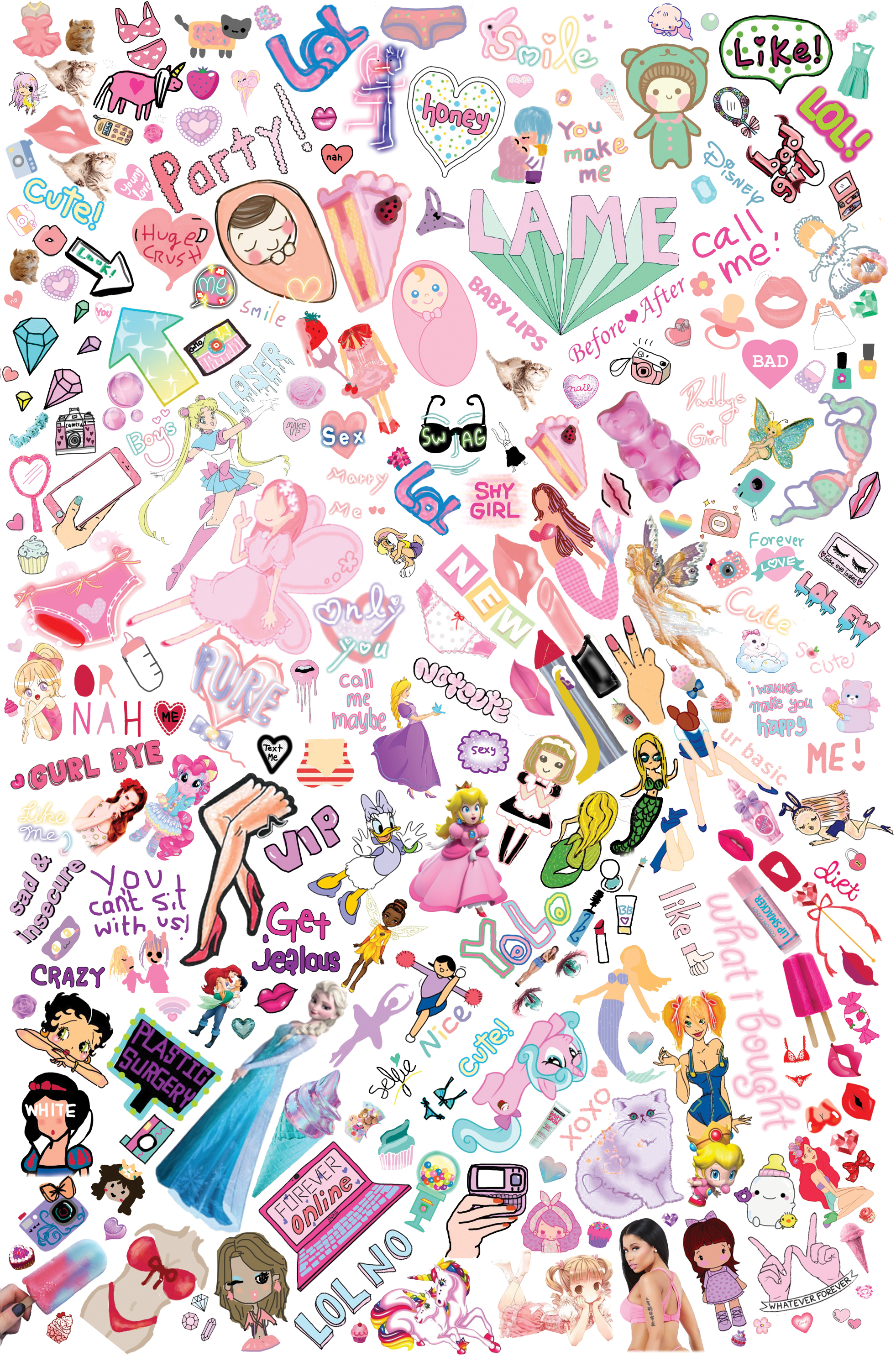 Learning about culture and our place in it starts early. In preschool, nursery rhymes inform us that young girls are composed of sugar, spice, and everything nice. You’ll find all these cliché components but no nice girls at Bait and Switch, Malena Barnhart’s show currently at Eye Lounge. The mélange of youthful feminine iconography is remixed into the shapes of bear traps and spider webs. The contrast with their constituent images creates a dissonance that is at once enticing yet discomforting. Barnhart’s point isn’t that there’s anything wrong with unicorns or princesses or cupcakes per se, but rather, as she put it, how the overwhelming “accumulation can limit notions of possibility for young girls.”

In addition to the subtlety subversive visual works, there are two performance art pieces. If you missed the June 16th opening, you have one more shot at them tomorrow, Friday, July 7th starting at 6:15 PM. The first performance consists of an oral application of temporary tattoos by Barnhart onto fellow artist Kristen Schneider. According to a statement from Barnhart, the performance explores “mother-daughter dynamics, bridal adornment rituals and the role of female relationships within the enculturation process.” The second is the Mansplaining Help Desk where, full disclosure, yours truly will be unfortunately installed for the evening. It explores subconscious biases and a traditional tendency to defer to the nearest white male without really examining their credentials. 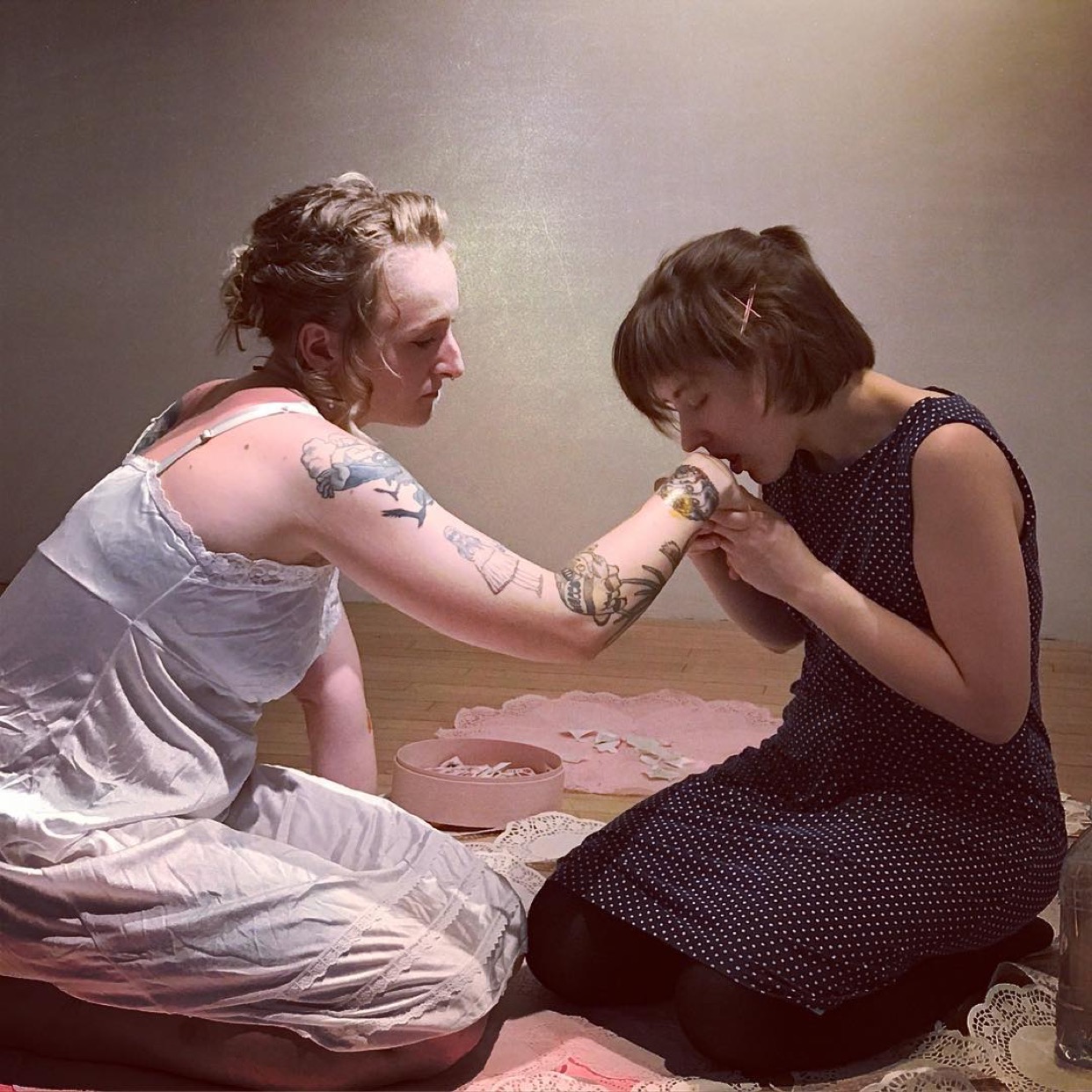 Entering from Roosevelt, the front of the gallery is lined with what at first seem like surrealist wallpaper samples in white frames. Look closer and you see webs and nets made of crimson lips thrusting out suggestive heart shaped tongues, pink frosted donuts, heart shaped cupcakes, pixelated stars, and simple renderings of cameras, now ubiquitous as the rest in the imagination space of youth. Messages are literally hidden amongst the ephemera, one, appropriately enough for our site, bearing the simple but honest message “u suck.” 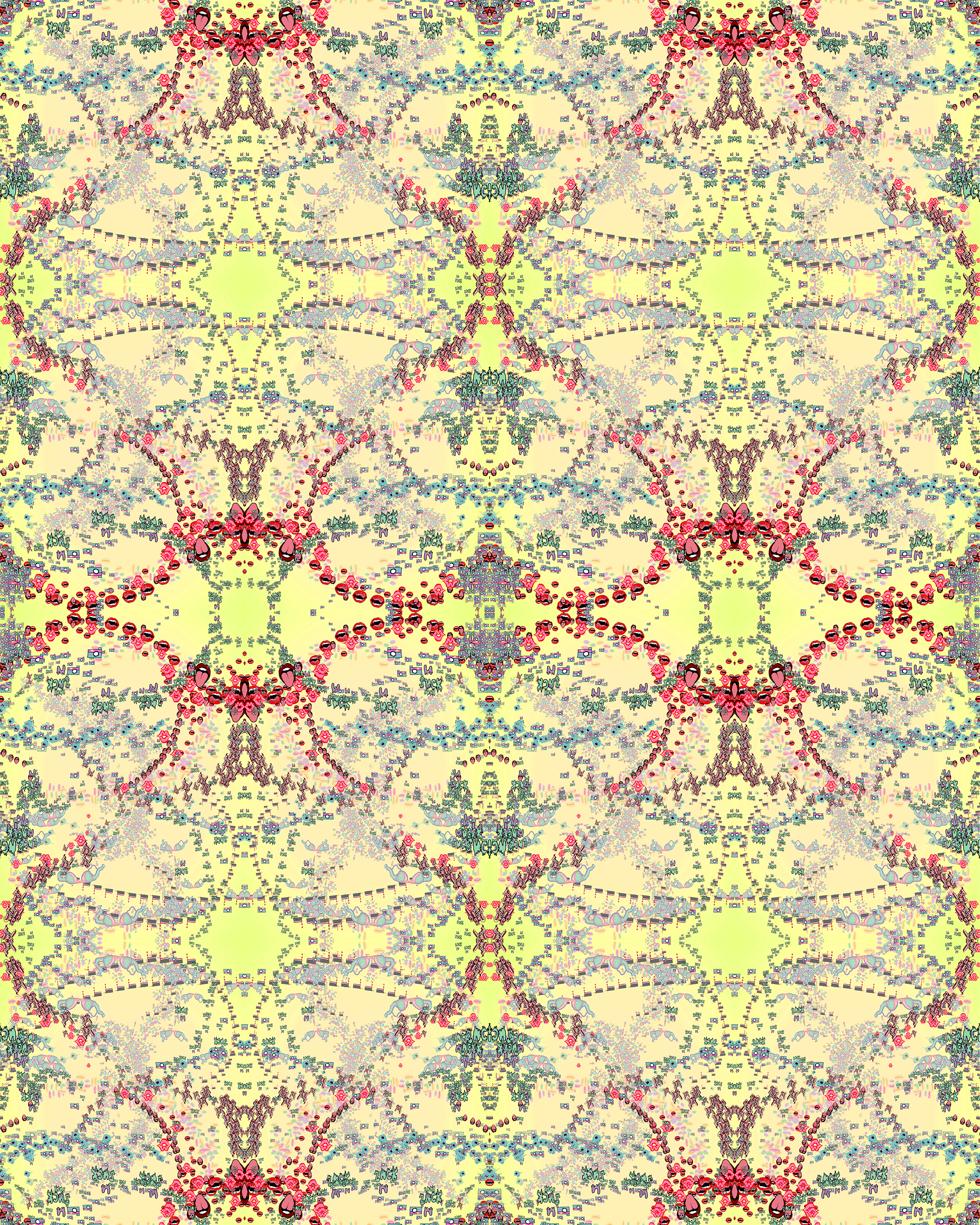 “It’s like this mass culture, media landscape washing over you. Any of the individual things aren’t terrible in themselves, it’s the fact that they work as a system. And it’s kind of beautiful at the same time,” Barnhart explained as she cut out the temporary tattoos she will be using in the performance and selling packages of. Many of the tiny images she cut were culled from phone apps like GirlsCamera. a “purikura” style photo editing app that allow users to adorn themselves with stock images of a Lisa Frank or Hello Kitty variety, or even to draw, create, and share their own. Barnhart has spent countless hours skulking the Internet for such cultural detritus, which she captures and catalogues with an almost hoarder-like obsessive urgency.

In the back of the gallery are three collages. Two are in the shape of bear traps, one displaying sharp triangular teeth and composed of hundreds of teddy bear sticker of various descriptions. The other bear trap had a long chain and is made of a roughly equal number of puckering lips. From a distance, they are ominous. Again, as you move closer, your eye skips from tiny image to tiny image. You momentarily forget the larger trap, distracted by an adorable panda or pair of sparkling rouge lips. The third collage features a profile view of a women on hands and knees wearing a bridle, saddle, and reins. The fact that she is posing doggy-style while wearing the accouterments of some bizarre zoomorphic fetish is made all the more cringe worthy by the hundreds of cutesy, carton unicorns staring innocently out at you. Again, the discomfort is intentional. 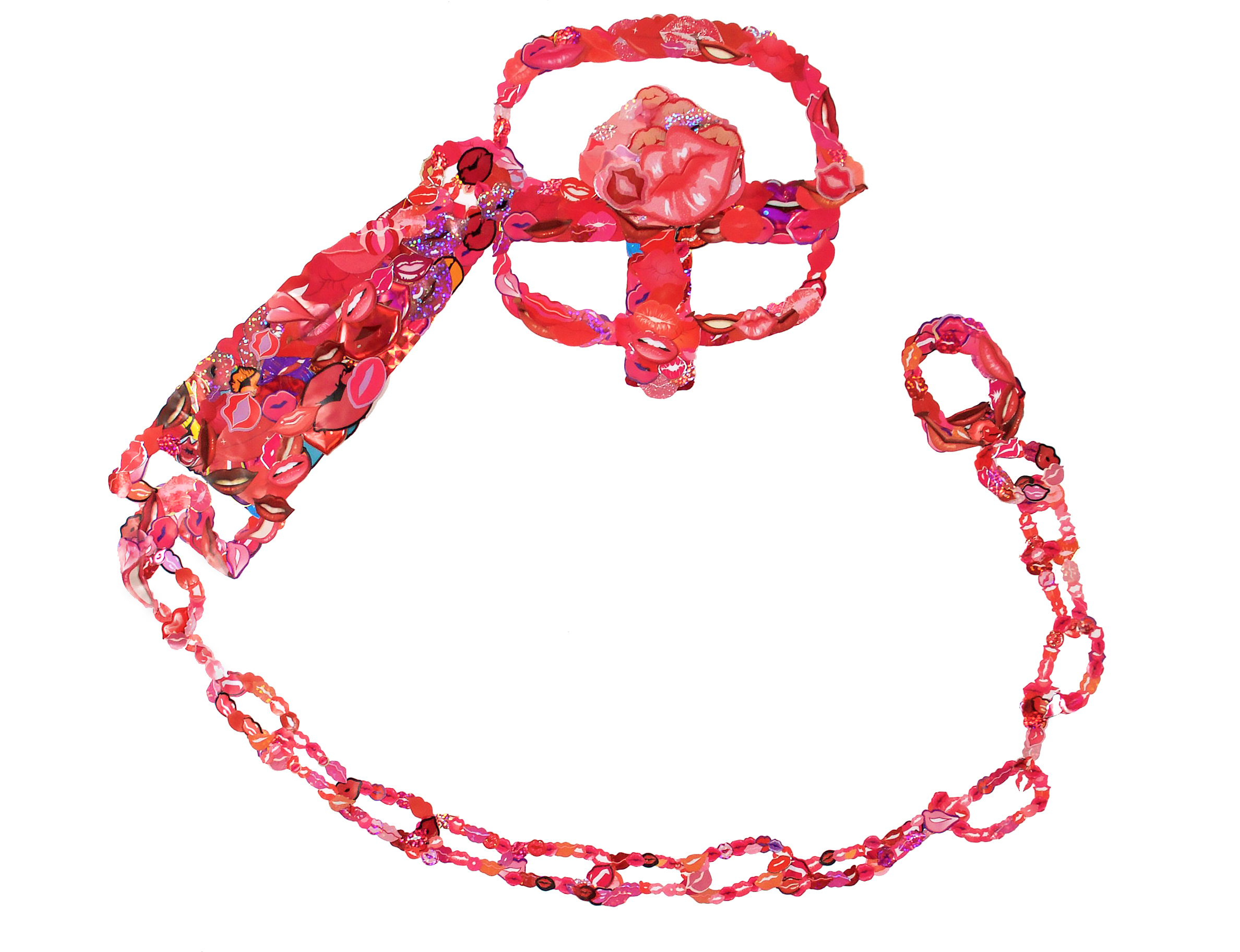 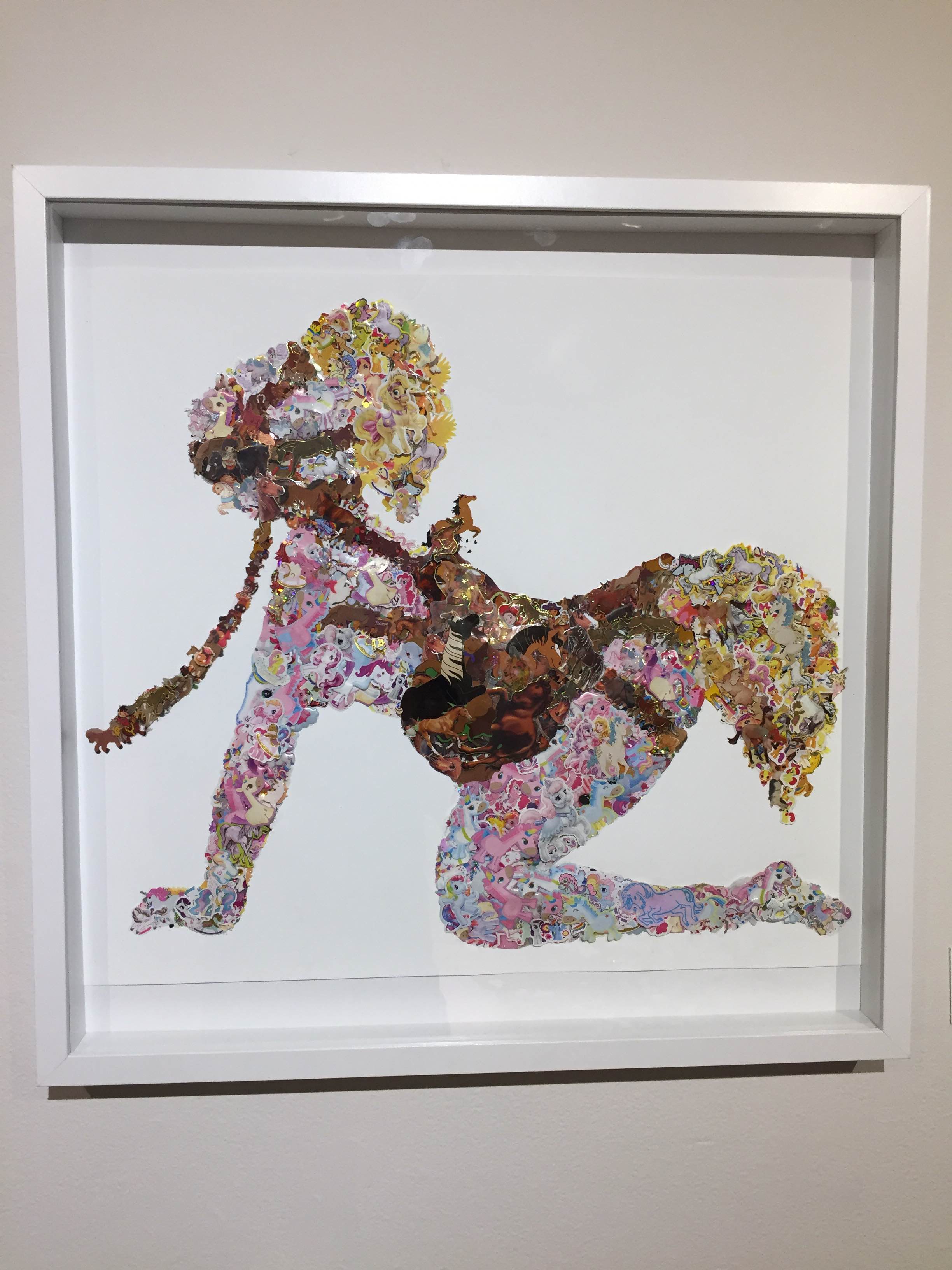 “Women are marginalized not through a systematic, brutal, oppressive machine like some kind of re-education camp. Instead, you participate in and are complicit in your own marginalization…I don’t see my work as being exclusive to ladies. What I’m talking about in my work hurts boys too,” she explained with an energetic, sweeping hand motion, vainly trying to indicate the scope of the topic. “We’re swimming in this sea of media/news every day.” Like fish in the sea, we’ve become blind to the medium subsuming us. Barnhart’s art tries to make us see the water.

Come view the performance art pieces Friday, July 7th starting at 6:15 PM or take a look at the installed works on Saturdays from 1 to 5 PM and Sundays from 11 AM to 3 PM until July 16th. Eye Lounge is located on the south side of Roosevelt between 4th St and 5th at 419 E Roosevelt St. To see more of Barnhart’s art, visit her website at http://www.malenabarnhart.com/.

Jeff is a freelance journalist and writer.