The air in downtown Tucson is cool and brisk. It smells like burning sage. There are clusters of people chilling on their porch steps, painting their faces. A nearby church on Fifth St. has its doors open and live singing spills out onto the street. When I walk by, I see a large screen in the church hall and words projected on a screen, lighting up one word at a time karaoke-style. It makes me wonder if gospel/spirituals karaoke is a thing. Stumbling onto a Christaraoke night wouldn’t be the weirdest thing I’d see all night, though. Not by a long shot. 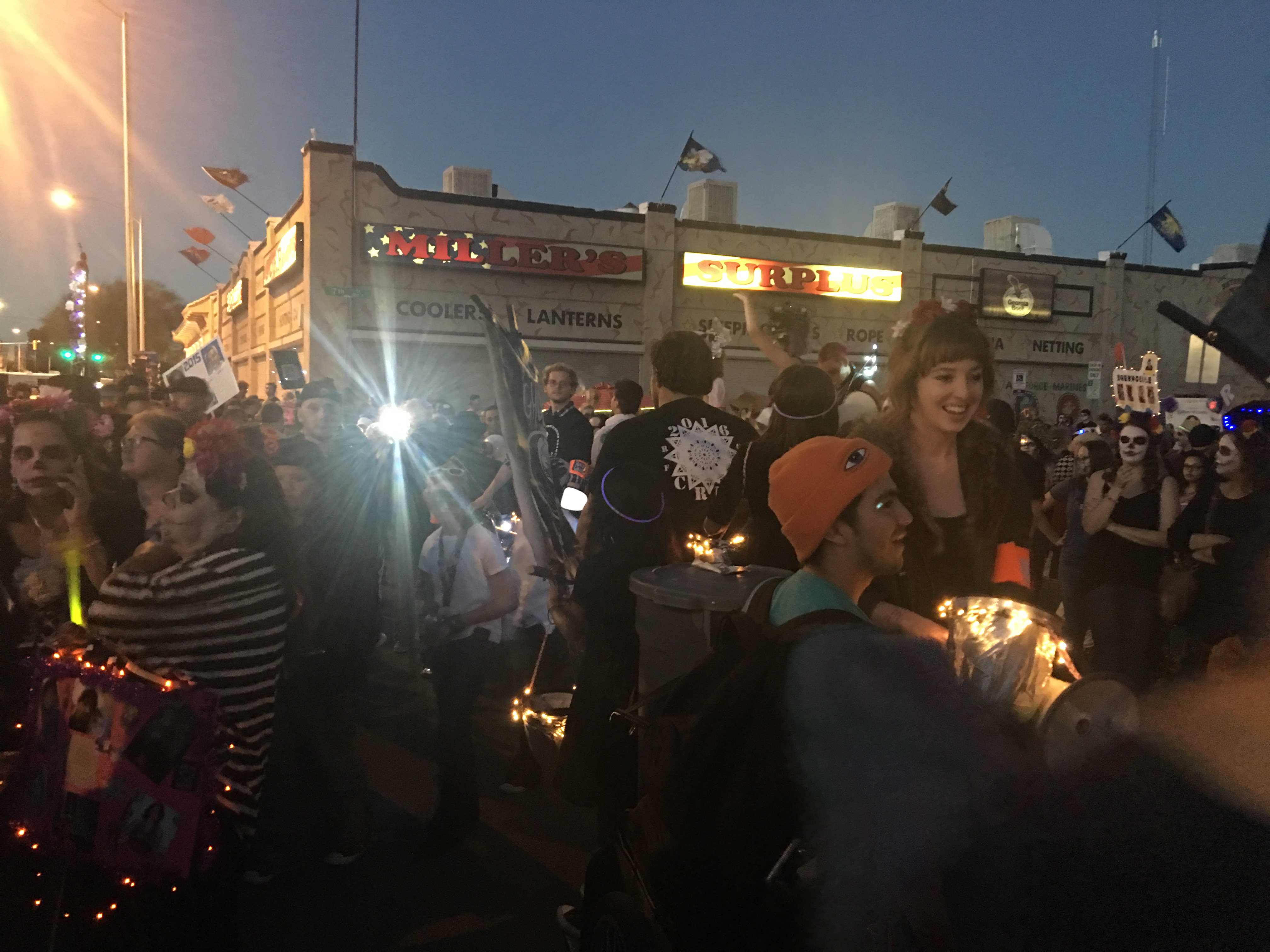 I’m in Tucson to take part in their annual All Souls Procession. Established in 1990, it’s one of the biggest recurring events in Arizona, a night of festal Day Of The Dead revelry that every Arizonan needs to experience at least once. The scale of it is mind-boggling. When I get to the starting point of the procession at sundown, it’s already swarming with an immense crowd. You could take five First Friday crowds (during a peak month) and roll them into one and it still wouldn’t match the horde that was assembled for All Souls. 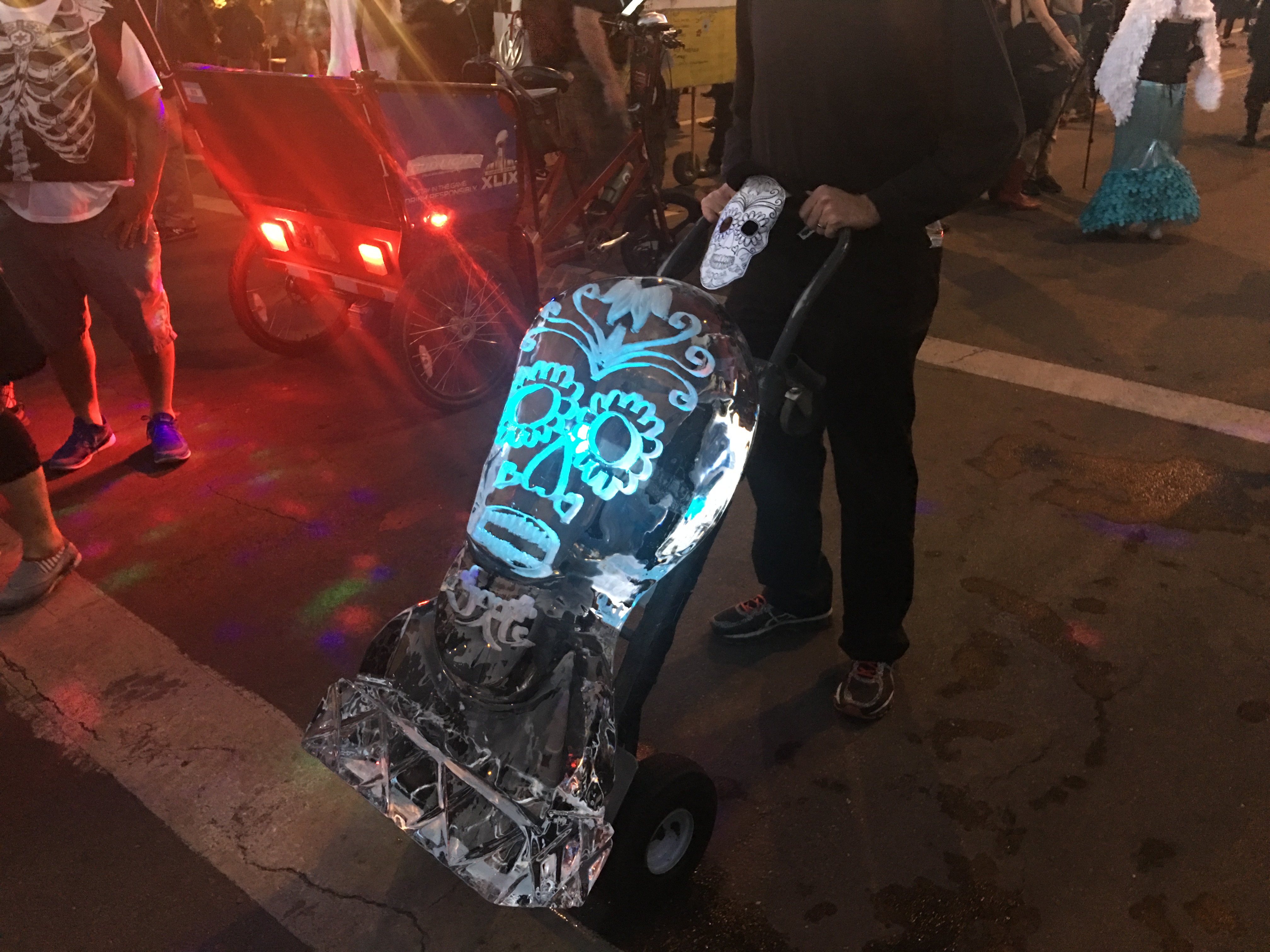 There are all sorts of floats and costumes on display at the procession. From gigantic peacock feathers held aloft by women in sparkly dresses to Beetlejuices of every size and gender, from massive paper mache skull masks to ceremonial Native American garb, people came out to the procession in all manner of makeup and costume. One guy even came out as Master Chief, who I guess was marching in the parade to pay his respects to all his fallen space comrades? 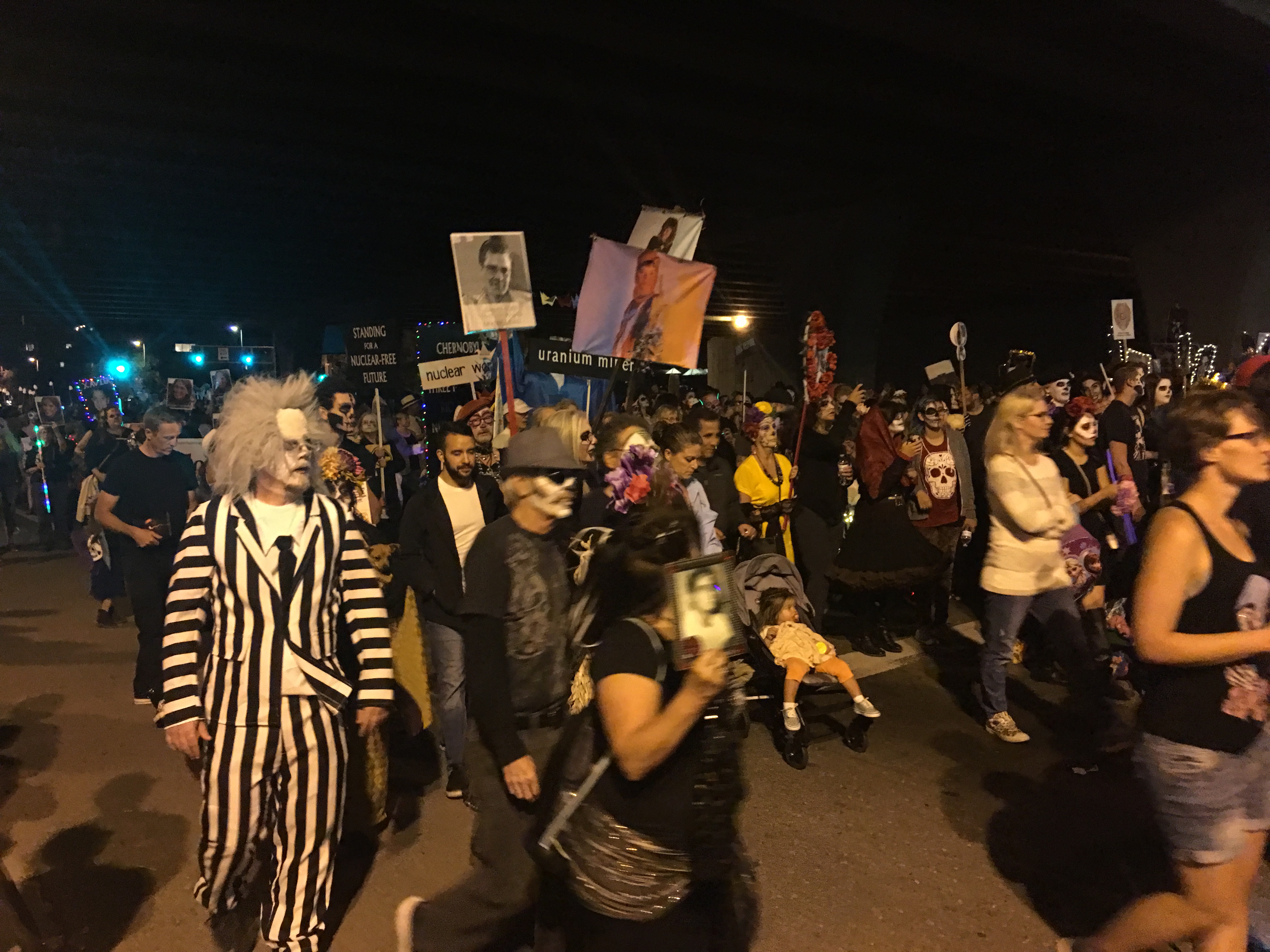 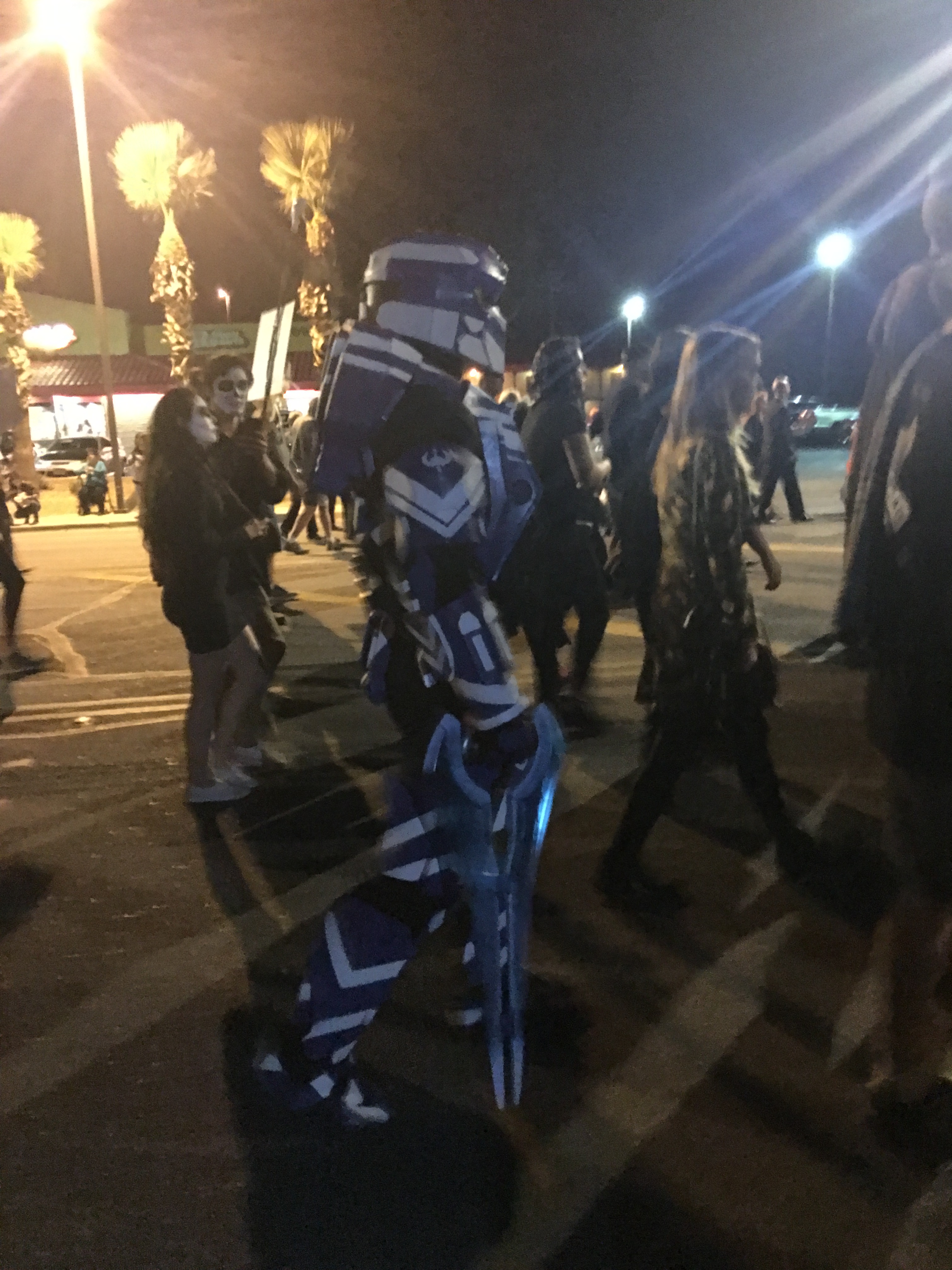 The Procession was full of people holding up signs and photographs honoring their deceased love ones. Some folks memorialized their dead by painting their names on their jackets; others wore mini altars (complete with burning candles) on their backs like little Cornell boxes of grief. And it wasn’t just humans being mourned: Pet owners came out en masse to honor their lost dogs and cats. The first time I went to All Souls, I saw a guy carrying around a wooden board with the taxidermied corpse of his cat nailed to it. The cat… lets just say it didn’t die in prime condition. Or entirely intact, for that matter. (From back in the day)

There were no taxidermied corpses this year, but I did see one man wheeling a dog skeleton in front of him during the Procession. A living dog saw the skeleton and followed it throughout the procession, sniffing at the bones. I’ve never seen a dog (that wasn’t in an Internet video) look that confused before. Or perhaps the poor mutt was in the grips of a profound terror. I mean, think about it: How would you feel if you saw a giant alien walking the bones of their pet human down the street? 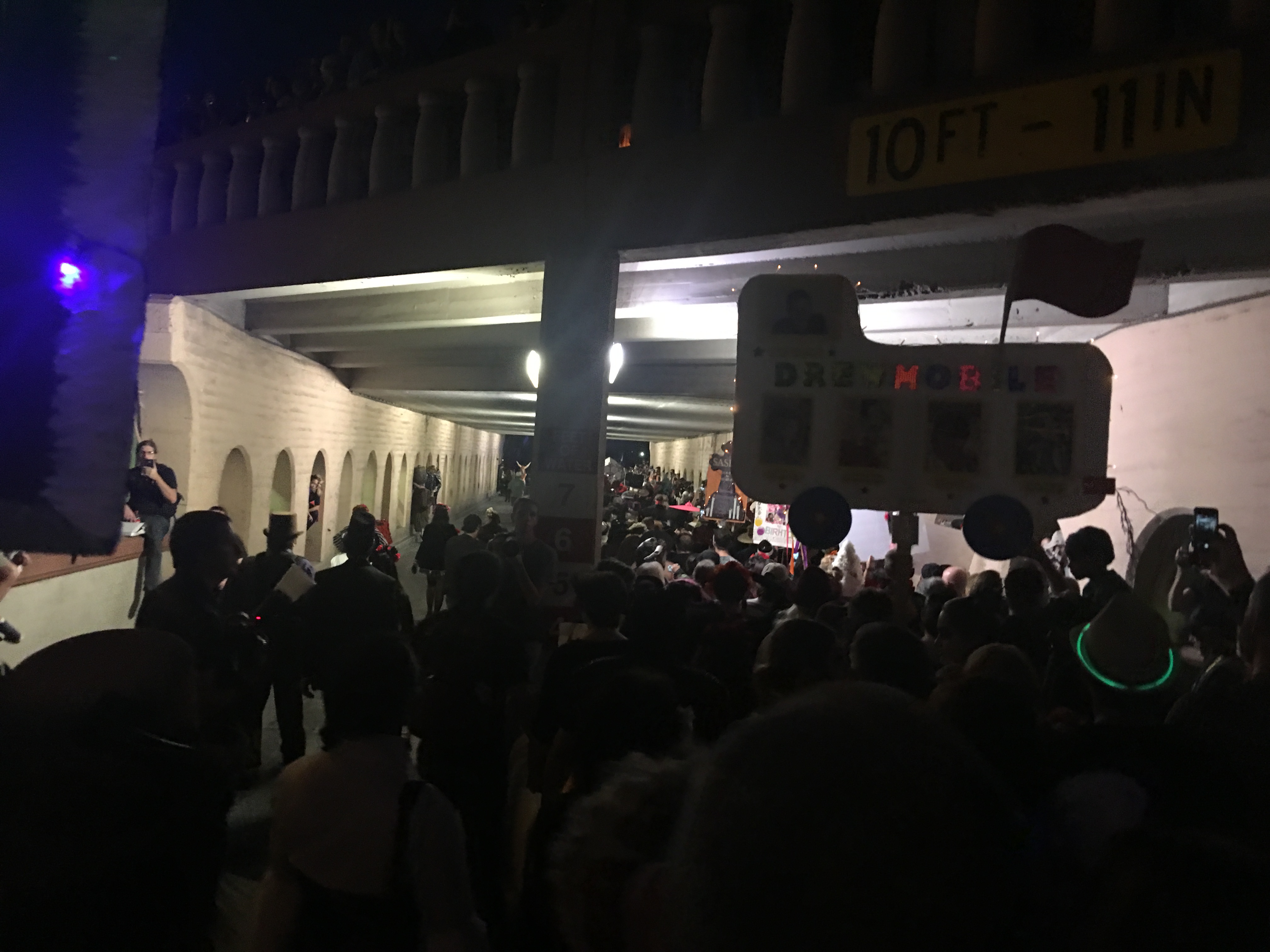 Propelled forward by the sound of pounding drums, the procession marched through the blocked off streets of downtown Tucson. The parade wound its way through an underpass, descending into the underworld. As thick as the crowd was in the parade itself, the streets were also packed with onlookers and photographers. The sidewalks all along the procession route were lined with folks cheering the procession on. Towards the center of the procession was a group of #NoDAPL protesters chanting “WATER IS LIFE!” There was also a domestic violence awareness group and an anti-nuclear organization who came out in force for the parade. The protest groups chants were almost as loud and forceful as the ever-present drumming that kept the procession moving. Every time I take part in this parade, I’m always staggered by how multi-generational it is. While the Procession’s roots come from the arts community, it’s obvious that so many of the people here are “civilians”. It isn’t like our P.A.P.A., where the majority of the participants and on-lookers tend to be Phoenix Art Scene denizens; The Procession’s reach extends far beyond the creative community to become part of the city’s fabric, as intrinsic to its identity as Mardi Gras to New Orleans or soul sucking tech companies to San Francisco. Children, the elderly, frat bros, teeny-boppers, and old Burners alike gather to take part and march in this moving spectacle. It’s a level of wide community engagement you just don’t see in Phoenix from any of our artsy events. But to be fair: They’ve been doing this since 1990. They’ve had a LONG time to build up goodwill and grass roots support. No local event in the PHX has been around long enough to build up that kind of critical mass or support. Yet. The parade ends in a large field with LED-lit archways and an elaborate fire-spewing stage. The crowd gathers as a miniature version of the Procession parades before them: Floats and revelers/mourners in costume cross the stage as a slideshow of the deceased play out behind them. Black and white images of the locally mourned flash onstage, along with pictures of the famous dead (like Lemmy and Bowie). And of course, the loudest applause for the dead is reserved for a photo of Harambe. Not even Prince or Rose Mofford got that much love. 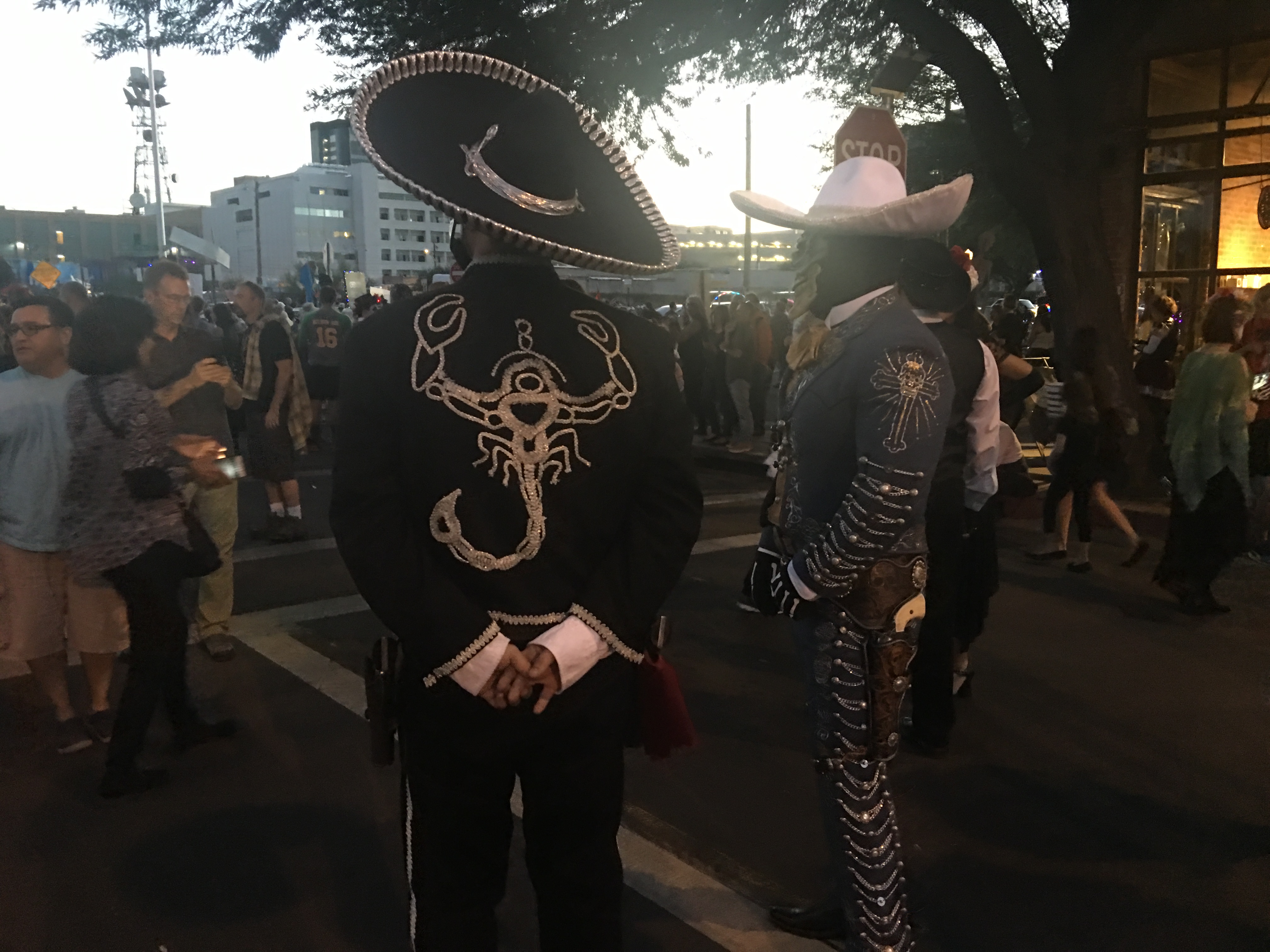 The night ends with a (seriously impressive) stage show. Stilt walkers, Native American dancers, and devilish acrobats lit in blue and purple cavorted across the stage as twin metal pillars spat out fire. The show felt like what would happen if Cirque du Soleil decided to do a show about the Lascaux cave paintings. Dancers wearing animal skins and antlers wielded flaming bows and arrows and staged mock battles while local singer SORNE wailed and sang and ululated on an elevated platform. A huge crane behind the stage bore aloft the receptacle of prayers gathered from the crowd, which was set on fire for the show’s thrilling climax. Or at least, that should have been the climax of the show. After the entire cast of dancers and stilters and acrobats took to the stage for one last fire-lit freak out, the stage was cleared for a solo singer to come onstage and do a five minute a capella song that was basically a recap of everything we just watched (she sang about sacrifices and honoring the dead and burning prayers). You could feel the energy in the crowd plummet during this last number. It was a perplexing decision: Why follow up what looked & felt like the obvious conclusion of the show with a vibe-killing a capella number that dripped with trying-too-hard gravitas and on-the-nose lyrics? It’d be like going to a James Brown show and right after James kills the crowd with a fierce and sweaty rendition of “Sex Machine”, he left the stage and Tracy Chapman came on to do a sleepy take of “Fast Car”. Don’t get me wrong: I love me some “Fast Car”, but it’s the last thing I’d want to hear after getting my body rocked by the Hardest Working Man In Show Business (R.I.P. JB). The weird thing is: This isn’t the first time the Procession’s incredible stage show ended with a whimper. Last year my brother Elliot and I walked the Procession and watched the stage show with glee. It was an inspiring display of choreography, flashing lights, and warped alien beats. And then after the entire troupe of performers gathered onstage to do their final dance together, a singer took the stage and basically did five minutes of what could be generously called godawful slam poetry. My brother and I were CONVINCED that it was someone who had bum-rushed the stage: It was such a massive anti-climax that it couldn’t have possibly been a planned part of the show. What kind of production would let the air out of their own tires that badly ON PURPOSE? But this year proved us wrong: As terrible as Slamzilla was last year, clearly she was a part of the show. Just as how A Capella Emoter was clearly handpicked to end this year’s show with a No-Fun-At-All solo piece. 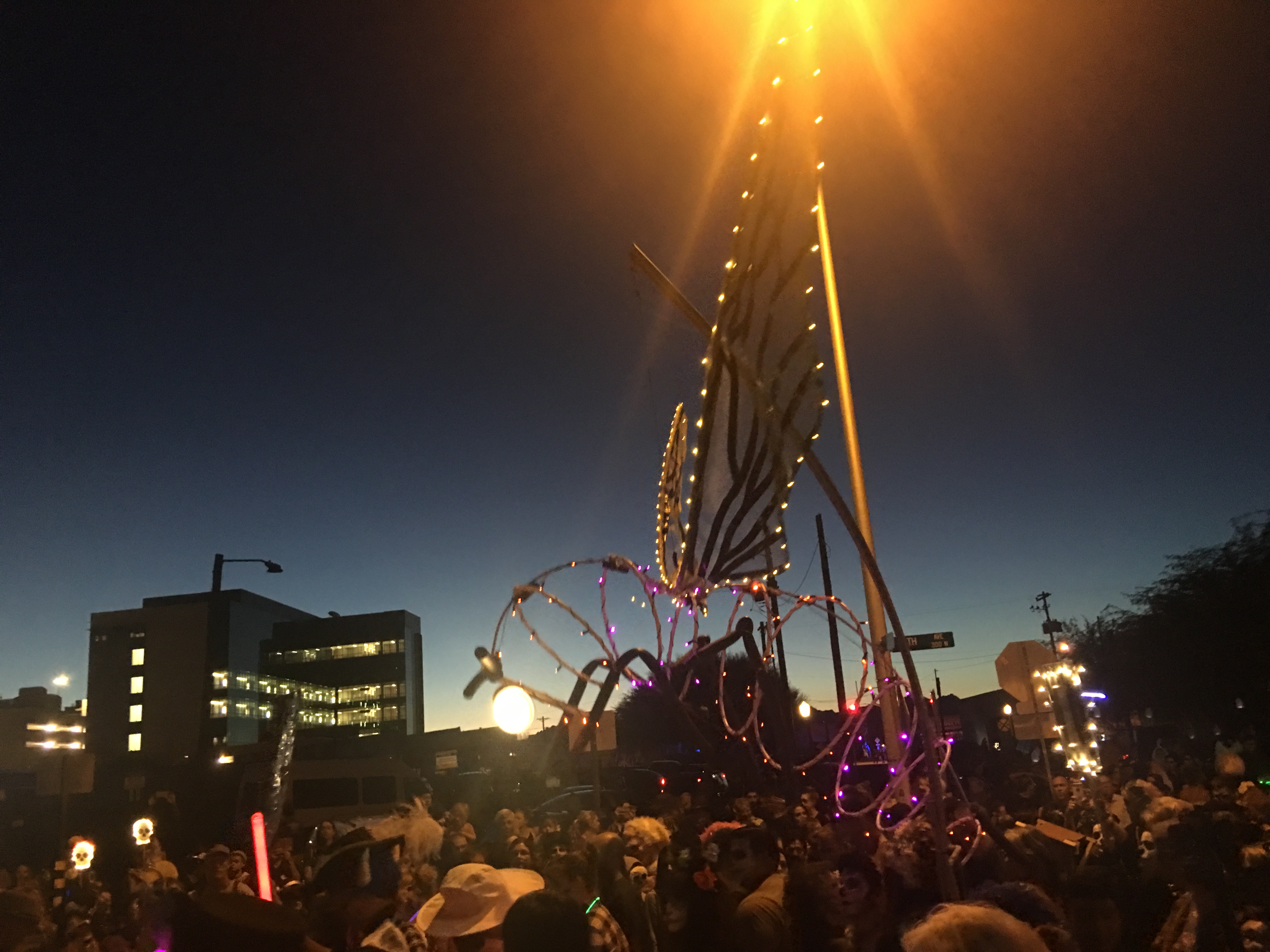 Although the show didn’t end well, it was still a spectacular and stirring sight to behold. A fitting end for a long, exhausting, and exhilarating march through the streets of Tucson. I walked back to my car, passing by 191 Toole where Purling Hiss were playing an outdoor set. Their cacophonous guitars rang out and echoed throughout the empty streets as I walked block after block towards my ride. The night seemed full of so much life and urgency here that the thought of leaving that atmosphere and going back to Phoenix was dispiriting. Tucson seemed alive in ways that Phoenix, as much as I love it, hasn’t been for awhile now. It made me wonder, as I drove home, if I should have been carrying a picture of Roosevelt Row with me throughout the parade. Perhaps I had, in a way, and that’s why I wanted to go anywhere but home last night. It’s one thing to walk with your beloved dead and say goodbye; It’s another thing to sleep alongside their corpse, day in and day out, and wonder when you’ll be able to dream again without their stink in your nostrils.