Touring musicians are a dime a dozen. Hitting the road to bang out some tunes is a tale that’s older than the dirt that was caked under Satan’s hooves when he taught Robert Johnson how to play the blues. A touring storyteller/tarot reader/performance artist? That’s another story entirely.

While most storytellers tend to stick to their neck of the woods, Michelle Embree has rambled out into the world to share her Storytelling Rituals. Combining music with storytelling, theatrical elements, and her metaphysical interests (Embree is an accomplished Tarot reader), she’s toured her shows across the country.

In addition to her live performances, she’s also an author. Her young-adult novel Manstealing For Fat Girls was nominated for a Lambda Foundation Literary Award in 2006, and her full-length play Hand Over Fist won the Saints and Sinners Literary Festival’s national competition. The play later went on to have a full run in New Orleans, where Embree also teaches as a faculty member for the New Orleans School of Esoteric Arts.

I got a chance to talk with Embree before her visit to The Trunk Space. We talked about Tarot cards, the positive power of creativity, and how hard it can be to explain what your work’s about to other people. 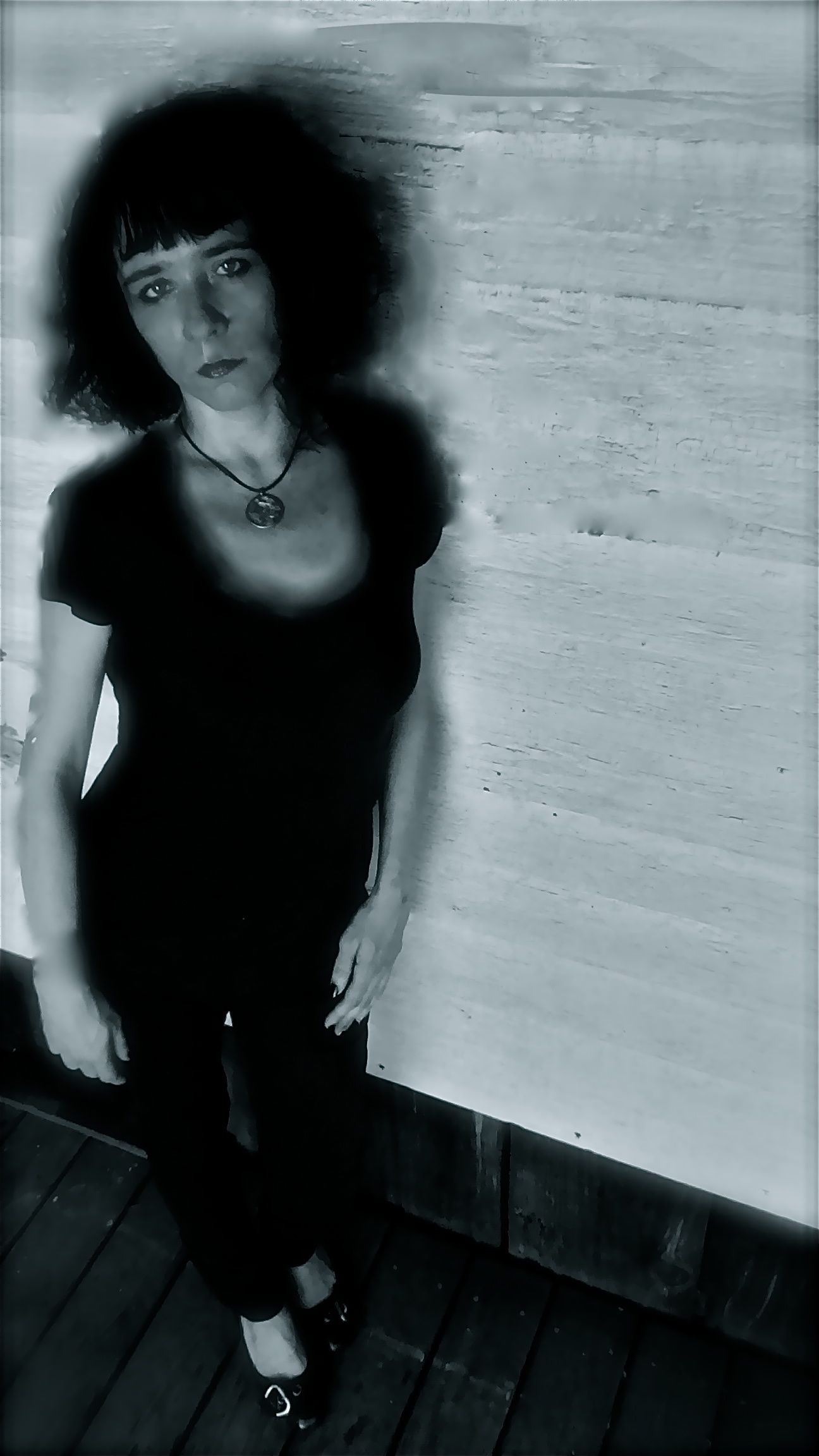 How did this tour come together?

It is a collaboration between myself and a musician named LadyBabyMiss. We met in New Orleans; we’ve admired each other’s work for many years. We put this project together, which is a storytelling show. This is our second show together – we had toured a different show last year. This one’s called Split The First Atom. It’s a story that I’ve written and that she’s written music and lyrics to go with it. It’s a pretty dynamic experience.

What was the collaborative process like? Did you write the story first, and then pass it along to LadyBabyMiss to work on the music? Did you both kind of work separately, or was there more of a back-and-forth?

What was the genesis for Split The First Atom? What inspired you to write this story?

The seeds for this show were in the piece that we did last summer. As we were going along working on that piece, I said ‘you know, this has two parts to it.’ Part of it is that it gets mentioned in that first story – we talk about atoms for a bit. So this one picks up from there – but they’re standalone stories, so you don’t need to hear the first one to appreciate this one. They’re both quite different.

In addition to being an author and performer, you’re also an accomplished Tarot reader and you’ve done work as an oracle. I was wondering if those kind of esoteric practices have an influence on your theatrical work?

They definitely do. The work that I do with Tarot cards over the years has really evolved – I get a lot of information from them. And the experience of that, of reading Tarot cards, interpreting that information… You’re channeling it – it’s a very different experience to having to belabor and think through things. Energy and Words are coming at you very fast… it’s like being plugged directly into pure information.

When I’m up there performing, it’s a similar experience in some ways. Especially in terms of energy – the show gives off a lot of energy. I can’t see it – I’m up there doing it! But I can feel that energy being reflected back at me by the audience. I can see by the way they’re responding what that energy looks like to them. It’s really an oracular performance in that way.

You describe your storytelling work as rituals. When I hear the word ritual, it makes me think of group work. Participatory events. Is that an element of the show you’ve put together? Is it something that the audience takes part in, or is there more of a divide between you and the crowd?

It’s interesting – it’s not participatory in the sense that the audience is asked to do anything. It is participatory in that you can engage in the magic that’s happening within the story, on whatever level you’re prepared to engage with it. You can come and experience it just as a story… but there’s a circle open – it’s a ritual event, so you can choose to participate in it. And parts of the story refer to the audience, too, so you’re invited in that way.

Ultimately it’s meant to be a warm and inviting experience. It’s not a challenging event where you don’t know what to do. It’s definitely a ritual in that people feel energetically moved by it. 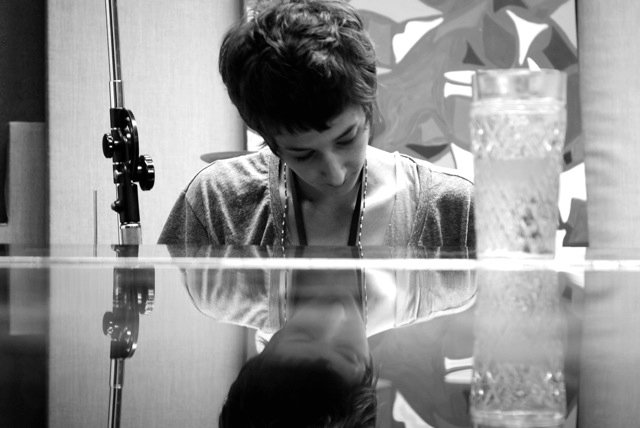 A touring storytelling/performance art show isn’t something you see everyday. Most audiences are used to seeing touring bands, but this sort of thing is outside a lot of people’s frame of reference. Do you find that audiences get on your wavelength quickly when you perform this kind of work, or is there a resistance from them that you have to work through?

People get on my wavelength right away. The way that the stories are presented – there’s music, and my voice in storytelling mode is very soothing, so people just fall into it. And the heroines of the story are teenage girls, so there’s that element of innocence that’s being brought to the story. It’s very traditional in that it’s taking these people through a journey. People feel like they’re at home because it’s a mythical story being told in a traditional format… And we’re not asking anyone to join a belief system. We’re just fusing a lot of different things together.

Combining all these elements together into such a unique format – have you found other artists while touring, or where you’re from, who are working in this kind of mode? Or do you feel that the work you and LadyBabyMiss are doing makes you outliers?

I think we feel a bit like outliers. As we go along, we’re trying to figure out how to contextualize what we’re doing. People say to us often ‘I’ve never seen anything like this before.’ It’s wonderful to think that we’ve created this thing that’s so unique, but the problem is that we don’t know how to explain this thing to other people!

I read that you’ve been working on designing your own Tarot deck. How’s that coming along?

It’s going very well! I definitely have a lot of content for a Tarot book. I teach Tarot; I’m on the faculty of the New Orleans School of Esoteric Arts, so I also teach Tarot there. I’ve probably got a third of the deck done. It’s a long process, but it’s coming together. The medium I use to make the cards is – I work in collage. I’ve been spending a lot of time cutting things out and laying them out. It’s a long process, but I love the aesthetic of it. I’m looking to have that ready in Christmas of 2018. It’s called The Book of Keys. 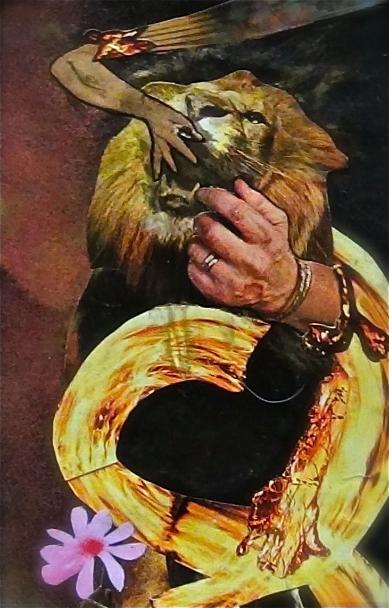 The Strength card from Michelle Embree’s Book of Keys

Some occultists who have made their own decks often substitute or add in new Major Arcana cards. Like how Crowley swapped out the Strength card for Lust in his Thoth deck. I was wondering if you’ve been doing anything like that in your deck?

There are some things I’m doing in my own way. Like The Hierophant, which is part of the Major Arcana, is recast as The Librarian in my deck. The Empress is the Creator, because I see her as the creator of all things. Mostly I’m a traditionalist, but there are some things that I think we need to modernize. Going back to The Hierophant – turning that into The Librarian really brings out the archivist character it has and makes it more dynamic. The Hierophant in traditional decks is this rigid figure – librarians are awesome, and a part of what makes them awesome is that they’re a bit rigid: ‘Did you reshelve that book? That’s not what that sign says! You don’t put that book back – I do that.’ It’s keeping the traditional element of the card while – I mean, who even knows what a hierophant is? I don’t even know what an actual hierophant is! It’s like the Pope, or… that image isn’t useful to us.

So was that part of your inspiration for making a deck – to take some esoteric concepts that are a bit outdated and make them more relevant for a modern reader?

Yeah, in some ways. I’m definitely making a deck because having interpreted Tarot for so long it just made sense to re-imagine the Tarot in my own way, as both a reader and an artist.

As a writer, do you use divination as part of your creative practice? I’m thinking of writers like Philip K. Dick, who used the I Ching to help him write one of his books. Do you draw inspiration from your cards?

When I’m writing, my deck is right there with me. I’m asking it about characters that I know. Sometimes when there are moments where something needs to happen in the story, like if the heroine needs to meet a new character – ‘who is it?!’ I’ll ask the deck to get an answer. Draw a card – ‘oh, so it’s the villain!’ I’ll use the deck to introduce new characters, and to see what possibilities could exist in those characters.

Something else that I do: when I read Tarot cards for clients, I’ll occasionally do readings for other people’s creative projects. Particularly with writers – I love to read for writers! I’ll read for clients at times when they’re like ‘I can’t get my protagonist to do anything.’ ‘I’m stuck and I don’t know what’s going on!’ So I’ll actually read cards for the character. I’ll do a session where I’ll find what problems the character is having. It’s interesting to see them react to that, to opening up the psychology of their character. Anytime I can work from a piece of art with the cards is an exciting experience for me. Tarot is a wonderful storytelling device. Paul Foster Case said that the Tarot is a book disguised as a deck of cards, and I think that’s definitely true.

I love that idea – using Tarot to help people divine their storytelling problems.

I love talking to people about creating. Listening to people, watching people talk about creating in a positive way – you can see their spines straighten up, their shoulders go back and their heart space opens up. The body language changes, the tone of their voice changes… Creation is a really great way to circumvent things that we may not understand that affect us from our deep psyche.

Michelle Embree is performing with LadyBabyMiss on Wednesday, July 5 at The Trunk Space. 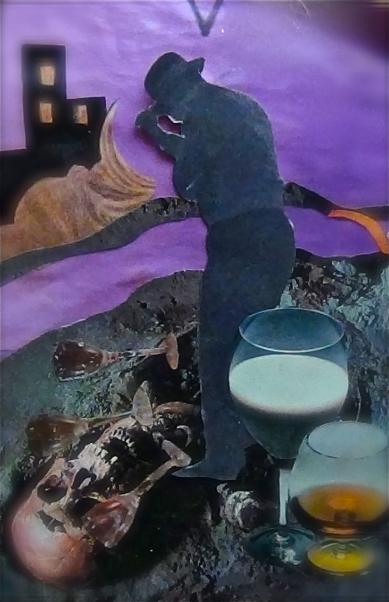