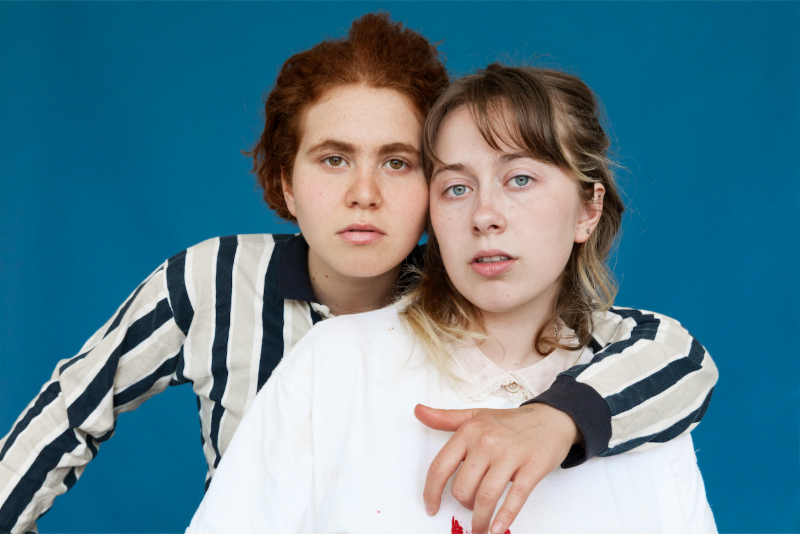 Editor’s Note: It’s forecasted to hit 120 next Tuesday, which is batshit insane. While we don’t recommend leaving the house unless you got a good reason (120? In June? Already? GODDAMN), if you’re out and about you should seriously check this show out.

It can be nerve-wracking waiting for a beloved band’s second album to drop. Will they fall prey to the sophomore slump? “You have a lifetime to make your first album and only a year or two to make your second” – a cliché, but one that often turns out to be true. What can seem fresh and novel the first time out can get hit with the dreaded diminishing returns the second time out. You don’t have to look much further than early ‘2000s luminaries like The Strokes, Interpol, and the Yeah Yeah Yeahs to see the sophomore slump at work.

When the duo of Harmony Tividad and Cleo Tucker released their first self-titled EP as Girlpool in 2014, their spare folk punk sound and nursery rhyme harmonies made them standout. Using only vocals, guitar, and bass, they crafted songs that were intimate and haunting. Whether they were singing “eat me out to American Beauty” or condemning slut-shaming, Tucker and Tividad’s voices filled up the empty spaces in their songs with a confidence and force that put most punk singers to shame. Strip away their sad pop guitars and bass and Girlpool would have been the world’s best a capella riot grrl act.

When they dropped Before the World Was Big, their studio debut in 2015, their songs took a deeper, introspective turn. They sounded like moody lullabies – if Young Marble Giants’ Colossal Youth and the third Velvet Underground LP had a child, it would sound like “Chinatown” and “Cut Your Bangs.” A hushed, lovely, and vulnerable record, it was hard to imagine how it could be bested or followed up.

While bigger groups have fallen prey to the slump, Girlpool have produced their best album to date with this year’s Powerplant. They’ve kept the personal songwriting and plangent harmonies that have defined them, but have added a fuller sound to the mix with percussion. The full band sound gives songs like “123” and “It Gets More Blue” a forcefulness and energy their past work lacked. And their voices sound fantastic playing off drum hits and fuzzier guitars.

Considering how well they’ve adapted their sound, it wouldn’t be hard to imagine them dropping the folk and going full-on punk for their next record. But perhaps that’s too extroverted a direction for their music. Part of their appeal is their insularity. It’s in their name: Girlpool named themselves after a chapter in Kurt Vonnegut’s Cat’s Cradle. The chapter focuses on a group of secretaries working in a laboratory’s basement, shut out from the outside world as they bury themselves with work. That image of a group of women cut off from the world, working together in a private bubble, seems to be deeply ingrained in their music.

In recent interviews, Girlpool have talked about being inspired by the comics work of Daniel Clowes. It isn’t hard to imagine the duo as a bizarro world version of Ghost World’s Enid and Rebecca – an Enid and Rebecca that decided to run away together to Los Angeles and start a band. It’s that feeling of two friends against the world that remains a constant in their music. Listening to a Girlpool album feels like you’re pressing a tin can against the floorboards of a treehouse, straining to
hear them gossip; the only difference is now it’s a louder treehouse.

Mark your calendars: Girlpool is playing w/ Snail Mail at The Rebel Lounge on Tuesday, June 20.