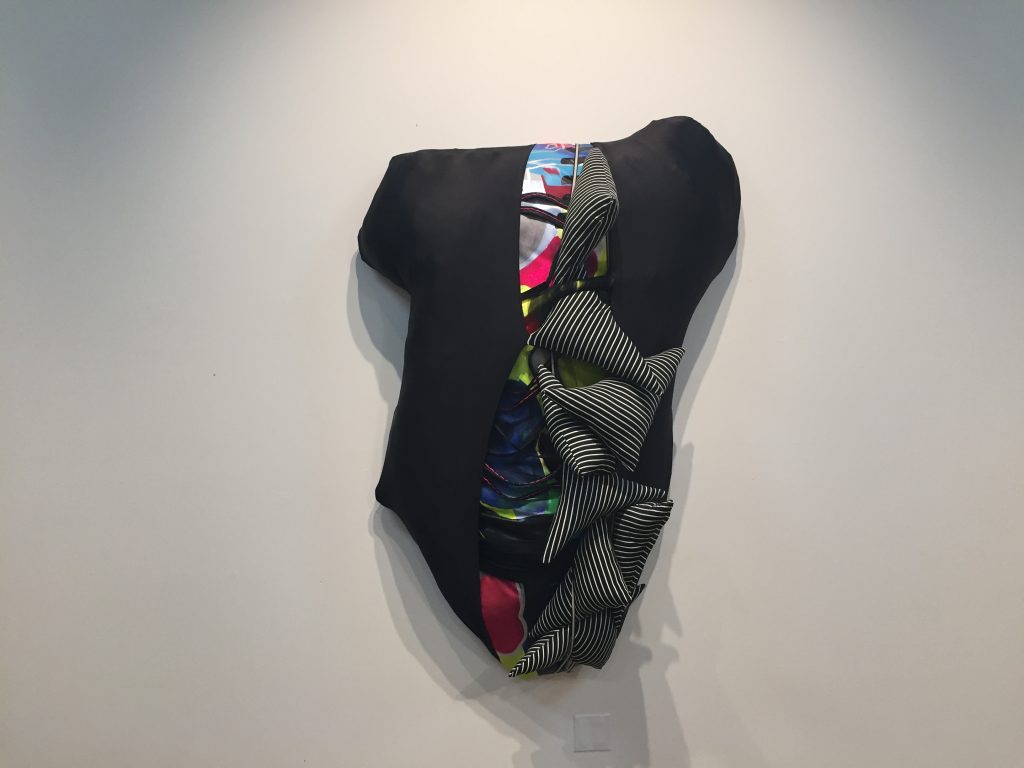 ‘Pillowphernalia’ by Rachel Goodwin // All fotos by author.

Even as I approached Grant Street Studios from the parking corral, with no idea where I was or what I was about to attend (I was kind of buzzed and my friend dragged me out without details) I had a distinct, familiar feeling—like I was entering a department store. Maybe it was the jazzy, lite music floating from hidden speakers, or the heavy fluorescent lighting, which, while not unusual for an art gallery, yet felt more intentional here. Even from a distance, the scene felt distinctly less cultural and more capitalistic.

I used to work in a mall, in Sears, in the Standing-At-The-Register-And-Staring-Off-Into-Nothing Dept. Malls were dead then. They’re still dead. I used to imagine never going home and living in that slow-moving place. Malls have such a weird, cagelike feeling to them, like a hamster terrarium in a pet store chain. Whether it’s a shoe store or an office supply conglomerate, it always feels like you’re in a cardboard box. A cremation box. 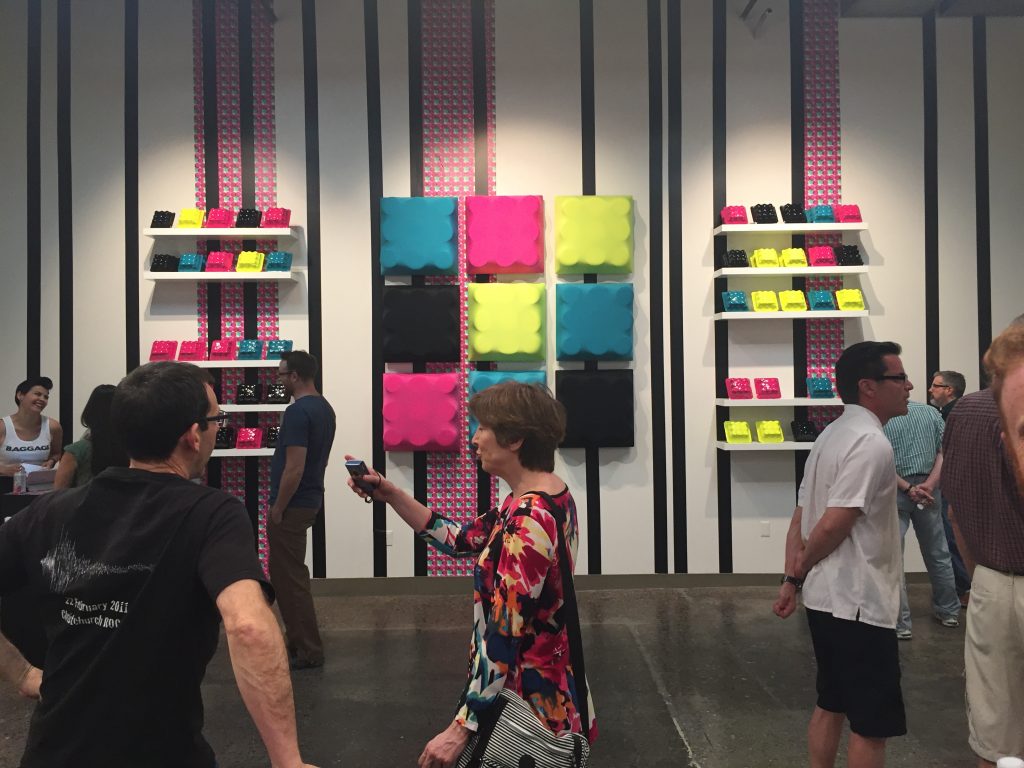 All of these uncanny emotions are present in Rachel Goodwin’s ‘BAGGAGE,’ which runs at Step Gallery from March 16 to March 25. She turns the gallery walls into a nondescript, abstract copy of a retail prison by using blobbish, Rorschach sculptures. Does this thing remind you more of a storefront mannequin or a high-class hipster water bottle (I think the kids call them ‘FlashHydros’)?

In Goodwin’s world, it’s everything and nothing.

It’s a grand, biting commentary on contemporary consumerism. In the artist’s own words, “Consumers are offered the opportunity to confront their purchasing patterns, pondering what their requirements for ownership might be.”

True to form, some of the pieces in ‘BAGGAGE’ are even affordable, priced at just $10 bucks for a lump of mesh and polyfil—objects aptly called ‘Accessories.’ Want an egg-carton-like box thing to sit on your shelf and collect a fine silt of dead skin cells and expired dreams? A ‘Lack’ is yours for just twenty dollars.

Or, go big and get one of the massive, $2000 globules mounted on the wall. They look like the melty, mercurial bad guy in Terminator 2 if he dissolved in a demolished American Apparel. The bargain bin was the best part, a tub in the center of the room filled with scraps of misshapen pillows, like a seamstress’s reject pile. 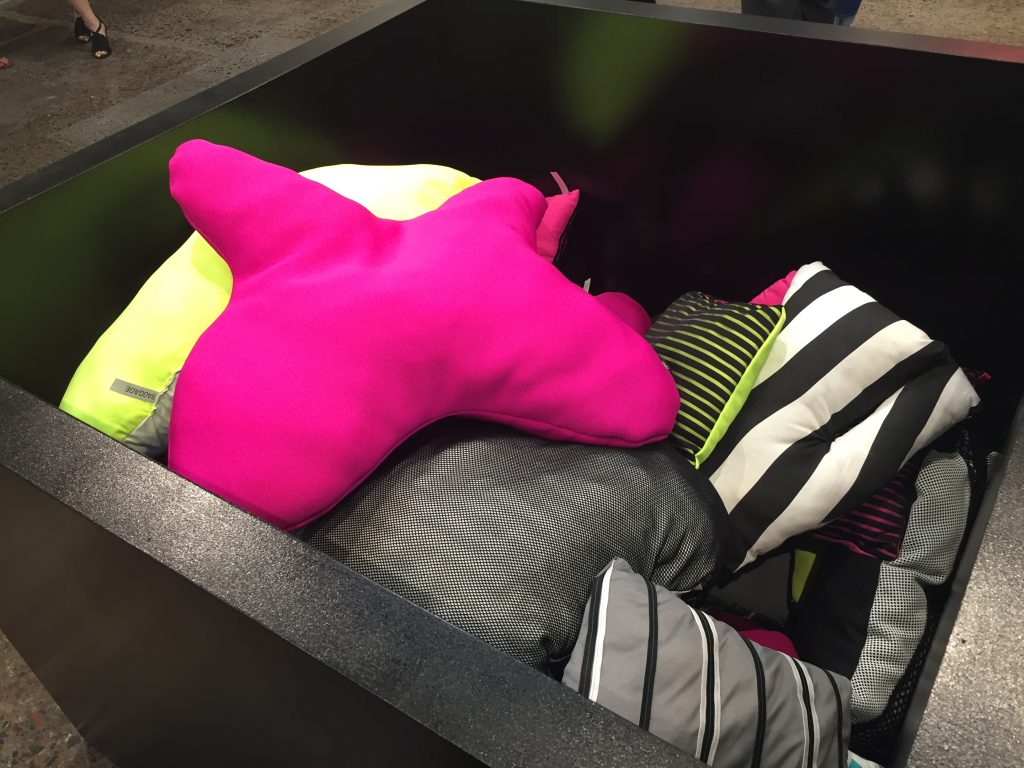 This info and more is in the cute little ‘Catalogue’ included at the front. The only thing lacking from this retail experience was a pimply, depressed teenager sulking at a cash register. Yes, this satirical exhibit dares you to explore the ritual of buying absolute bullshit by inviting you to actually buy absolute bullshit. And plenty of people did, complete with fancy printed shopping bags.

Of course, that’s actually the point, and what makes this exhibit so fresh and unforgettable. I go to a lot of art galleries, but I don’t remember the last time I was imagining a piece so vividly sitting in my living room. These thoughts are actually quite common for me, to my own shame, in a retail environment, such as Target or IKEA. But in an art gallery, I generally just appreciate the art for what it is—I don’t really picture purchasing it. 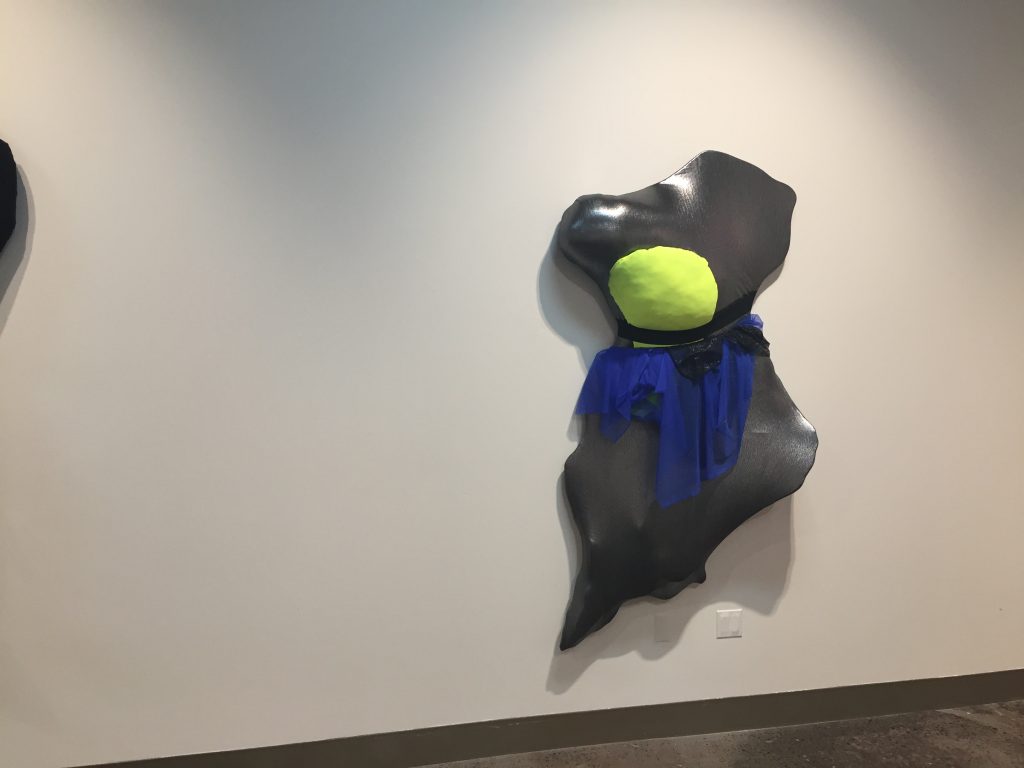 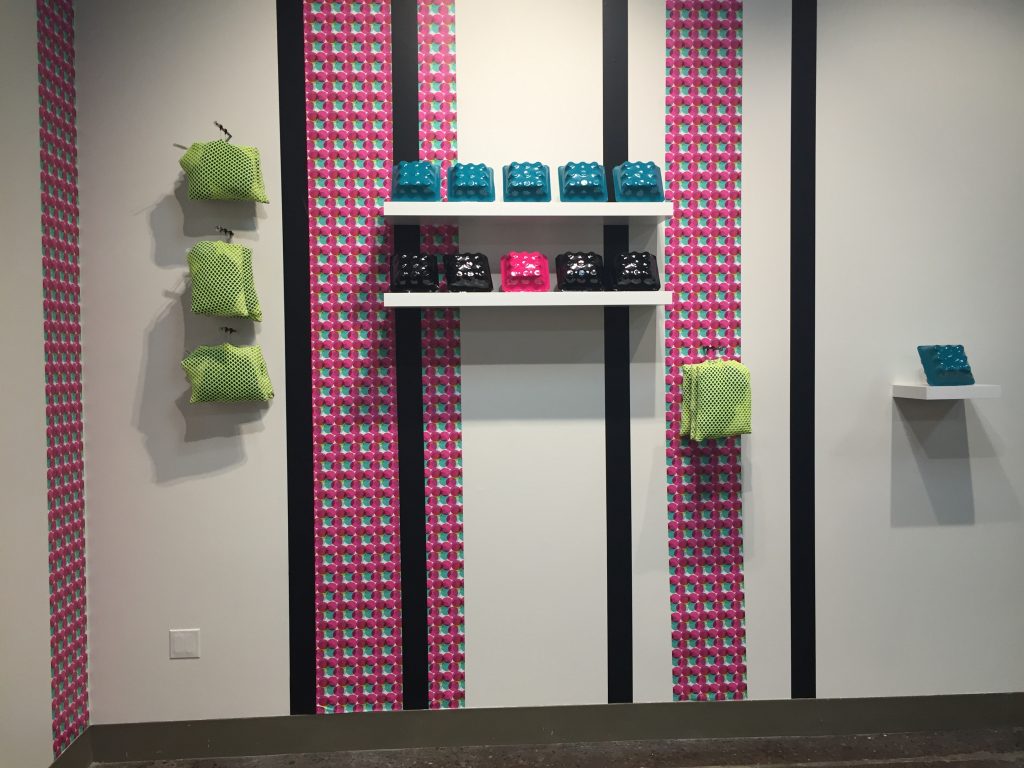 Not so at ‘BAGGAGE.’ The objects’ potential place in my life was all I could really think of and I readily admit I think many of the pieces would actually look decent in my weird living room. This art is flashy, abstract and nostalgic. It makes a strong statement. But I felt like, if I did buy something critical of buying culture, was I being tricked?

That isn’t to say anyone who purchased a ‘Lack’ was making a mistake. I couldn’t shake the feeling of having to explain what the object meant in my house—but why should anyone have to justify anything? You’re supporting a local artist as part of a fun statement. Buy crap, who cares. Whoever went home with a bargain bin treasure was likely more

As Goodwin puts it, ‘Personification is given to inanimate objects that surround our walls and fill our closets, yet empty our pockets. But are we fulfilled?’

Yeah, doesn’t buying things kind of suck? Why do we do do it? And why does it kind of feel good? It’s bad for the environment, we rarely truly need anything, our houses are a mess, yet shopping triggers multiple evolutionary responses in our brain dedicated to foraging, status and self-identity. TL;DR — Capitalism is manipulative and gross. But is the alternative to being a consumer being smug?

According to this lame-ass Netflix documentary that I was high enough on MDMA to watch a few months ago, there’s this whole minimalist movement going on right now called ‘Minimalism.’ (real creative name.) It’s about how if you get rid of a certain amount of your stuff, you’ll be happy! The two main guys in the movie definitely don’t sound or act like cult leaders encouraging you sell all your worldly possessions to find enlightenment.

Buying things sucks, but having possessions is likely not keeping you from fulfilling your true potential. So how do you find a balance? I don’t actually know, and I don’t think Goodwin knows either—but I’m always grateful when an artist asks challenging questions surrounding the retail detritus—the baggage—all around us.

As a bonus, here’s two other art things I saw, I forgot to write down the artist’s names, sorry. Wait, here they are: John Tuomisto-Bell and Travis Rice. 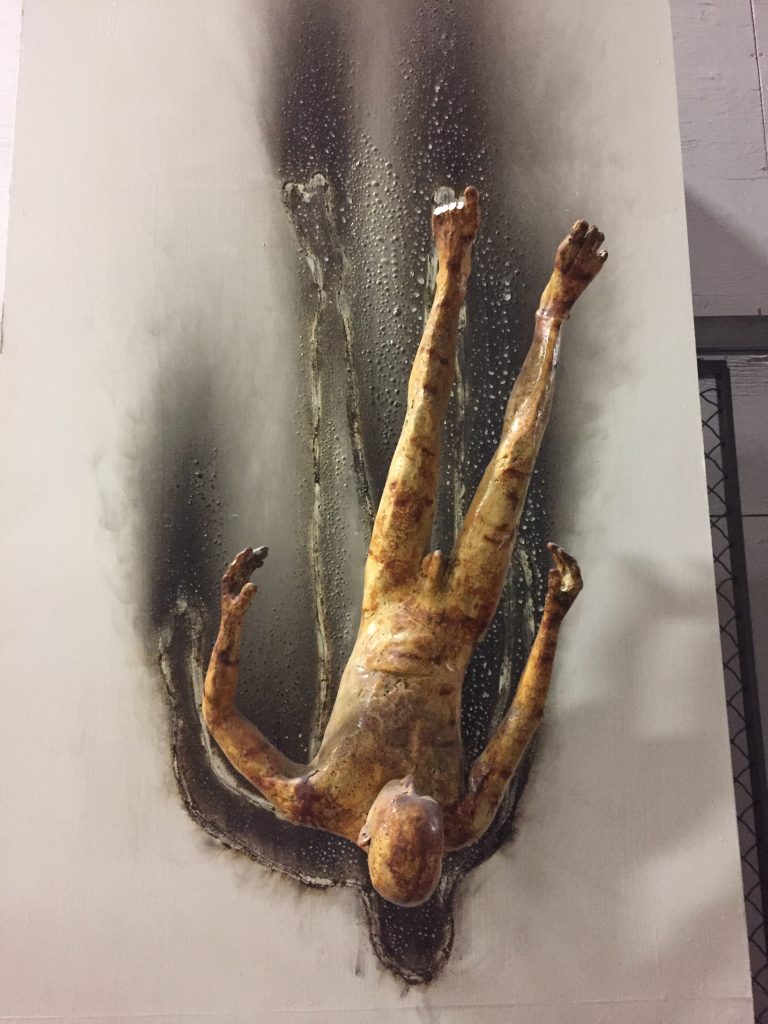 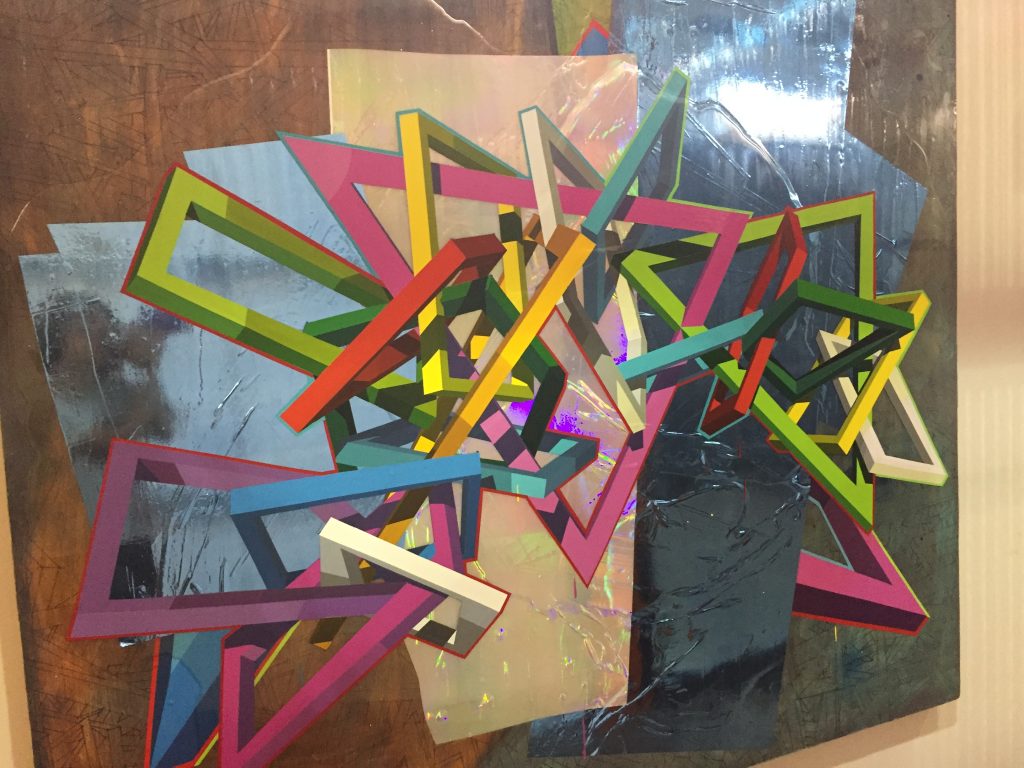