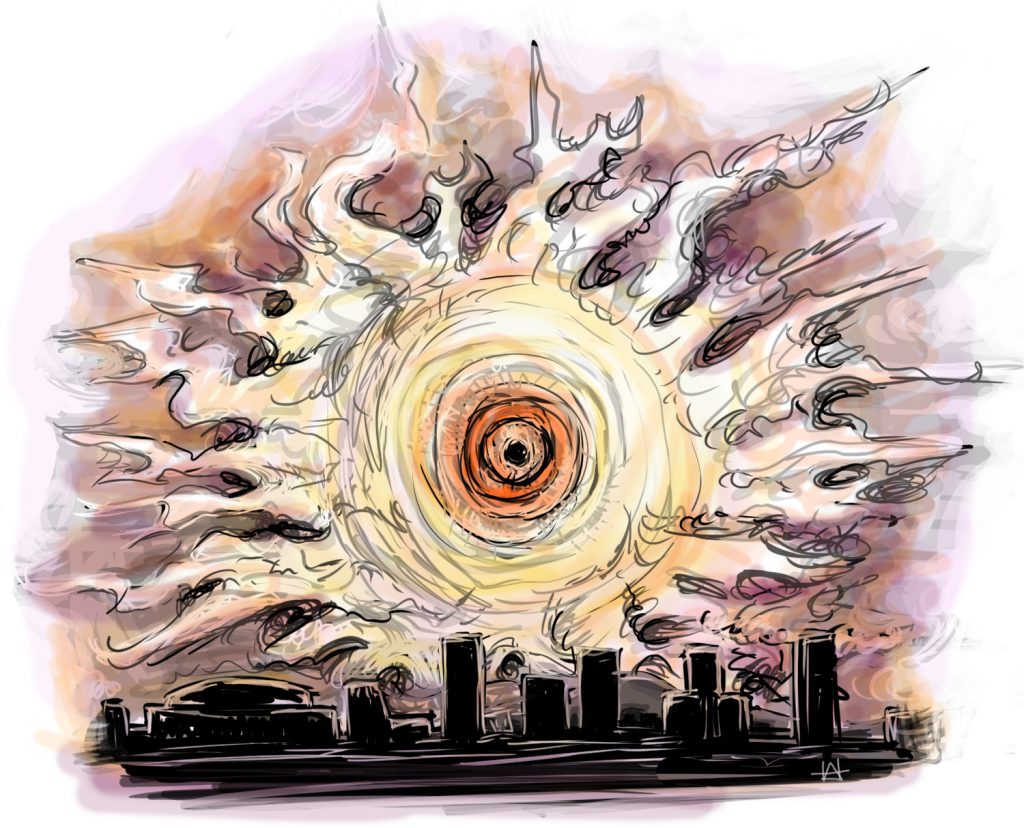 All images by the author.

People like to say Phoenix is Kafkaesque, with its faceless buildings, toxic air, and totalitarian bureaucrats. But this wasteland is really more Lovecraftian, as Hannah Irene Walsh demonstrated in her story, ‘The Last Phoencian,’ which she read at Space 55 for Lovecraft’s birthday in August. We asked her to publish it here and she even illustrated it for us. Enjoy! – Ed.

The desert knows only emptiness as it lays bare beneath the world’s cruelest star. The disc of flame rises to its zenith on the longest day as it has done since the planet’s making, knowing nothing of the life that has sprung from beneath it and cursed its name.

From above, the valley appears as a sun-ravaged hide: pockmarked wastes scarred by dry-washes and tumorous sanguine buttes. The land is a scattered mass of shrubs and cacti with hungering roots, rigid and spiny and as heartless as the elements that made them.

It is all as aimless as it is endless, and the heat seizes the throat of any creature that dares creep out from the shadows.

In the heart of this arid cradle once sprawled a city: a network of glass and steel that dared to defy the tyrant sun’s will. Yet there came a time when the weeping earth did swallow all of mankind and its arrogance, while the great solar eye watched unblinking. Now, only the city’s euclidean husk remains, its fragile geometry shattered by ages that have long forgotten its name.

It is a time in which clouds, heavy with caustic rain, no longer glow with urban fire; a time when the endless tracks of asphalt have been filled with sand, and when once-skeletal lions have fattened themselves on mankind’s tainted remains. Beneath the surface’s burning grit, the desert’s very blood sleeps, waiting for the darkness to fall once again over this forgotten valley of the sun.

Only as the great eye of fire descends does life awaken in this austere expanse. The valley at last lies submerged in blackness, awaiting the rise of its moon.

A crescent of rust-colored light penetrates its curved horns through a wandering cloud. Pale moths and strange beetles have begun their starlit rounds, and the winged ghosts that hunt them take flight from their thorny aeries. Ashen mouths drink from canals that no longer flow, their basins filled with sparse and now-fetid puddles of rainwater. All creatures know well the smell of a coming storm. A coyote paces anxiously, hackles raised, at the distant roar of thunder. A monsoon flood brings more death than relief, and each thirsty beast knows that the waters may too swallow them.

Sensing the arrival of night, something emerges from its crude subterranean dwelling. The creature sniffs the air with flared nostrils, revealing a row of jagged yellow incisors. It is an opportunistic carnivore, and it is hungry, empty, driven only by its desire to be filled with flesh that was once living. The creature goes forth on its four narrow limbs, its gait unlike the graceful prey animals that scatter at its approach. It casts a slumped, withered shadow opposite the rising moon, its naked gray skin rendered pale beneath the stellar glow. It is not interested in chasing rabbits on this night. The beast has known many summers in the valley, more than any other four-legged thing. It too smells the storm, and knows that by morning the flood will have left ample drowned carcasses, bloated and ripe for eating.

Swarms of cicadas shriek into the darkness, the humid night air made more suffocating by their maddening drone. The ceaseless chirping of these vile legions was an element beyond simple air and vibration. The hum was itself a medium, a message in a million arthropod tongues. The noise gripped the mind like a trembling vise, throttling animal neurons into a wild and agitated dance. Hares darted through the thorny brush without cause. Bats swooped, screeching at nothing. The oppressive sound bore into their bodies: every muscle tensely coiled, every eye dilated and darting, and every limb anxiously resisting the hysterical urge to flee into oblivion from the buzzing demons.

The creature’s age has granted it immunity from the cicadas’ endless hum, its madness already well established. In its long moonlit wanderings, it is satisfied to discover the carcass of some headless thing. A torso lay curled alongside an ancient steel tomb, limbs outstretched and withered into bony tendrils by the sun. Cold entrails slide down the creature’s vile gullet, smacking its tongue at the black fluids that drip down its chin. In its twisted mind, the stench of death is a luxuriant aroma. It fills its greedy belly until only the naked ribs remained of the desiccated vermin, its horrific shape abandoned in a wake of dust and matted fur. 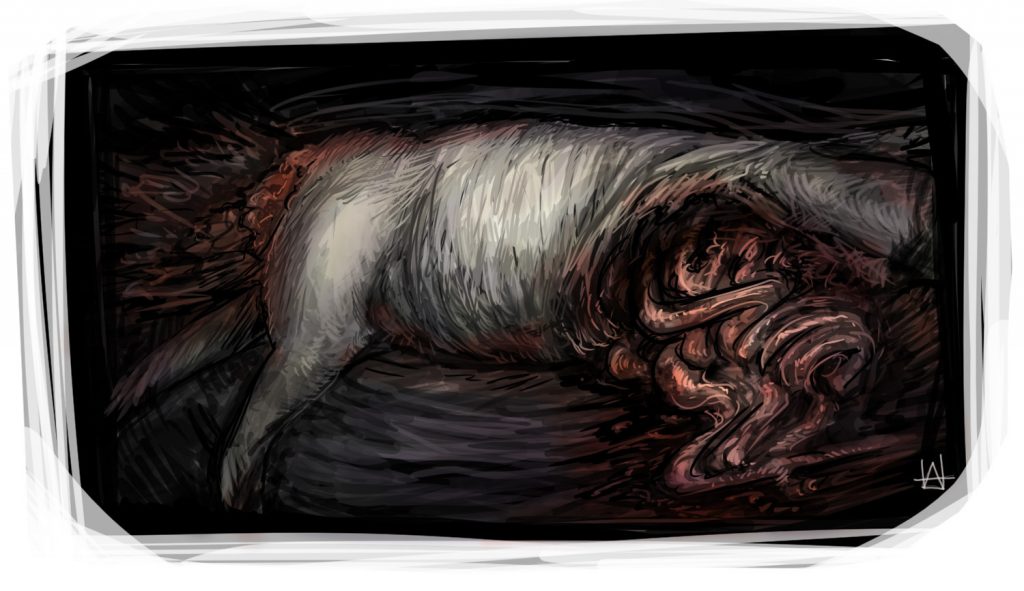 The pleasure of a full gut is only brief. The creature senses in its ravening mind a void more disturbing than hunger, and more demanding. In the blackness of the desert night, as this lone world spirals beneath the ghosts of stars, only the slouching beast cares to return the moon’s pointed glare. To the rhythm of the cicadas’ discordant song, awareness shudders its way into the eyes of the eater of the dead, thrumming in time with its manic pulse.

The creature sees through reality’s veil in the bruised darkness. Phantoms are cast into the midnight desert blue, memories long abandoned in the rotted caverns of its addled mind. The very knowledge of the self is a horror far worse than all that is violent and unseemly in nature, for only then is the mind terrorized by the solitude of an inevitable death. Yet no beast knows itself like the slumping necrophage, paralyzed beneath the forces of the moon, of the tempest, of the cicada’s penetrating song. 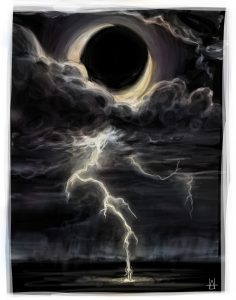 What is it, then, that stands alone on four legs as rigid and stark as cactus ribs? What is this thing whose thoughts turn inward with no eye but the mind’s, bored with hunger though still yearning? What is this beast that wanders alone, on callused hands that have forgotten all that they once exquisitely made? It makes its way down avenues of crumbling stone and steel, wandering as its ancestors did, yet with no longing for the world as it had once been. There was no mourning the withered gardens, no weeping for the stadium’s emptiness. There was simply the weight of a singular feeling, bearing down upon the creature as mercilessly as the heat: alone. Alone, alone, alone.

Raindrops fall warm and thick as blood, and soon the torrent is upon it. What is this creature that opens its arms to its own demise, and whose demise is its own making? It rises on two legs to face the churning sky, waiting. The field is bright for only an instant. The lightning strikes the earth. Where once stood the last Phoenician lies just another black mark on the desert’s skin, and the cicadas resume their song.