Candy For Your Ears: Celebrate Halloween With Otoacoustic Emissions

I’m not one for traditions. A friend once accused me of being a neophile, obsessed with change and novelty. In many ways, that’s true. When it comes to artistic interests and pursuits, I’m basically an unabashed slut; I’ll hop into bed with any new idea, sound, or vision that catches my eye. When it comes to friendships and relationships, though, I tend to stick with what I know; The traditionalist in me comes out there. And while I enjoy event hopping and exploring new facets of our local culture, there are a few recurring events that I treat as holy, that I’ll schedule my entire year around. One of those rare, sacred traditions happens on Halloween night at St. Augustine’s Episcopal Parish in Tempe. 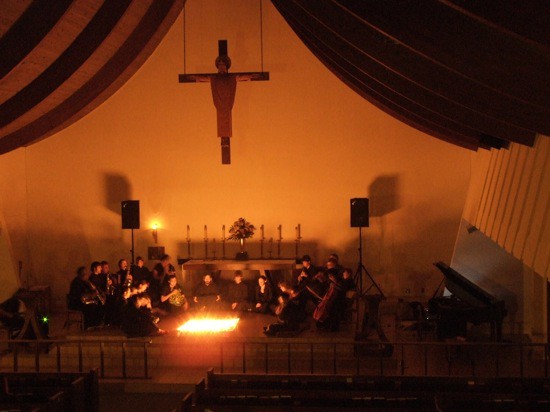 For almost a decade, a ceremony unlike any other in town happens at St. Augustine’s. At 9pm on Halloween night a group of robed musicians carrying LED candles slowly walks down the aisle of St. Augustine’s, beneath the church’s massive arched ceiling (which looks like the inside of Noah’s Ark, or the rib cage of Jonah’s whale). They gather onstage, standing beneath the gigantic cross hanging over the room, and begin to play. They pound at percussion, a choir of singers hums and wails, strings and woodwind instruments dance amidst tones generated by laptops and harmonic machine, and the music builds over the course of an hour from a hushed drone to a earth-shattering howl that sounds like all of Creation collapsing in upon itself, music that hits with all the force and velocity of a bullet punching through God’s skull. And then the drone quietly dies away, and the robed musicians slowly file out of the church as prerecorded music plays softly overhead. Their ritual complete, the coven of sonic magicians dissolves into the night. 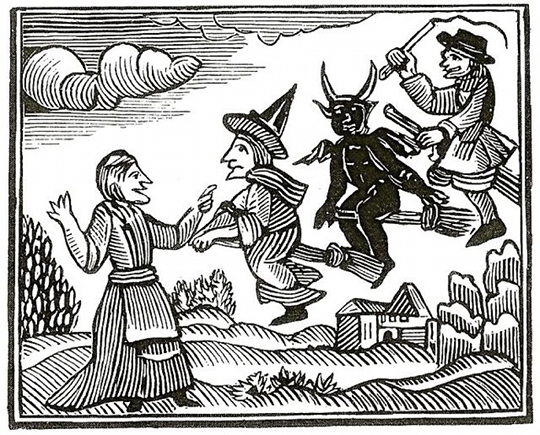 The event is called Otoacoustic Emissions. Organized by Jacob Adler, this will be the 9th year in a row that this constantly-shifting ensemble of Halloween players will come together to conjure their gigantic & glorious sound. The name of the happening refers to a phenomenon where sounds get generated by the inner ear when the cochlea is stimulated by a sound. In other words, certain kind of tones can produce music that sounds like it’s coming OUT of your ears instead of going into it. Otoacoustic emissions: Music made by your own head!

If you’ve never experienced this phenomenon before, look into the work of “visceral composer” Maryanne Amacher. Amacher was a pioneer in this strange field of sound, producing an album called Sound Characters (Making The Third Ear) which had songs that could stimulate this uncanny effect. Amacher’s music sounded like alien transmissions, bursts of radio static projected from some non-Euclidian dimension.

Experiencing the colossal drone at St. Augustine’s has a similar effect. There were times at past Emissions where I could no longer tell what sounds were being made onstage and what sounds I was “making” with my ears. The separation between myself and the sounds buffeting my body wore away: For a time I just felt like a massive vibration, a note bending in some celestial throat. I’ve been to some noise shows over the years where I’ve experienced brief out of body moments, but nothing as powerful as the feeling of almost total… erasure that happens at Otoacoustic Emissions.

It’s a haunting, overwhelming experience, and perhaps the most intensely spiritual event that happens on an annual basis in this state that ISN’T drug-induced. Whether you’re a fan of sacred music, a lover of Sunn O))) style drone music, or just someone who appreciates a good deep mindfucking, you don’t want to miss this.

To paraphrase an album title: For most of the year God and the Devil are raging inside us; God in the right ear, Old Scratch in the left, and we’re somewhere between them in the stereo mix. For one night a year, the holy racket onstage in this Tempe church switches that mix to mono. You’d be amazed at the things you can only hear when everything is just one channel. 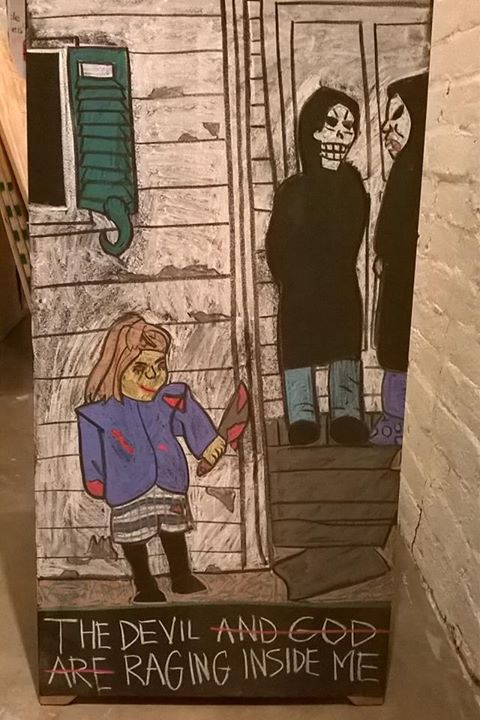 Chalk art by the author