Echo and the Bunnymen Sang the Hits Without the Heart

I could have sworn I heard Ian McCulloch sing that last night. As I left the Marquee, speed walking towards the parking garage (anybody who’s parked in the $10 garage knows the horrors of waiting a half hour to leave because of the never-ending line of exiting cars), I looked up the lyrics to “Never Stop” and saw that the line he sang was actually:

Considering that night’s show, I think the first line was more a propos. 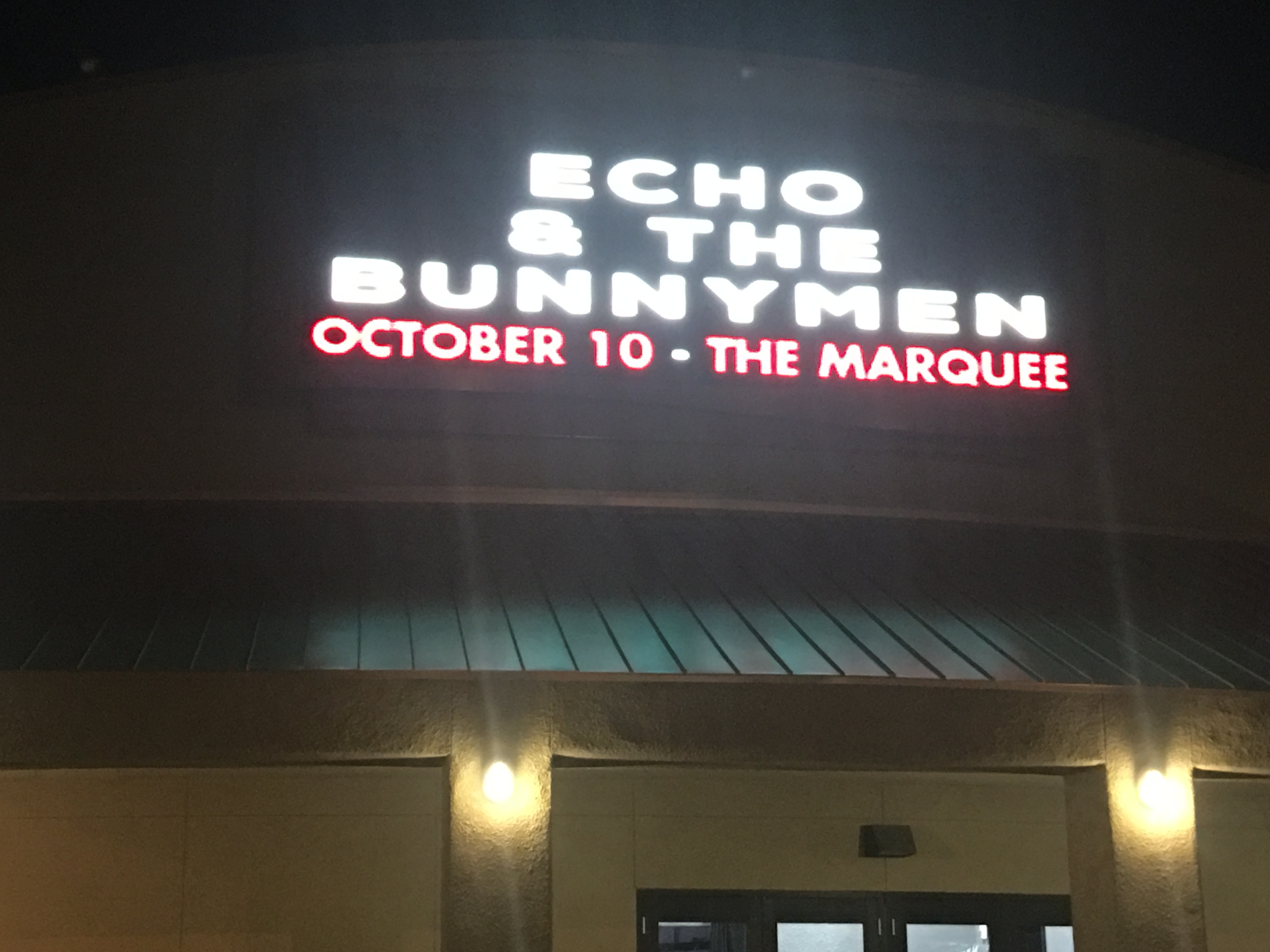 I showed up at the Marquee around 7:30 on Monday night. The venue was packed: The crowd skewed a bit older. There were probably lots of babysitters making bank that night watching the children & grandchildren of all the graying Breakfast Clubbers in attendance. After passing through the Marquee’s TSA security pat-downs, I treated myself to an $8 vodka tonic that tasted like the bitter tears of a Russian orphan. With each sip I could feel the time-space continuum ripple around me as past and future versions of myself cursed me for subjecting us all to this horrendous drink. 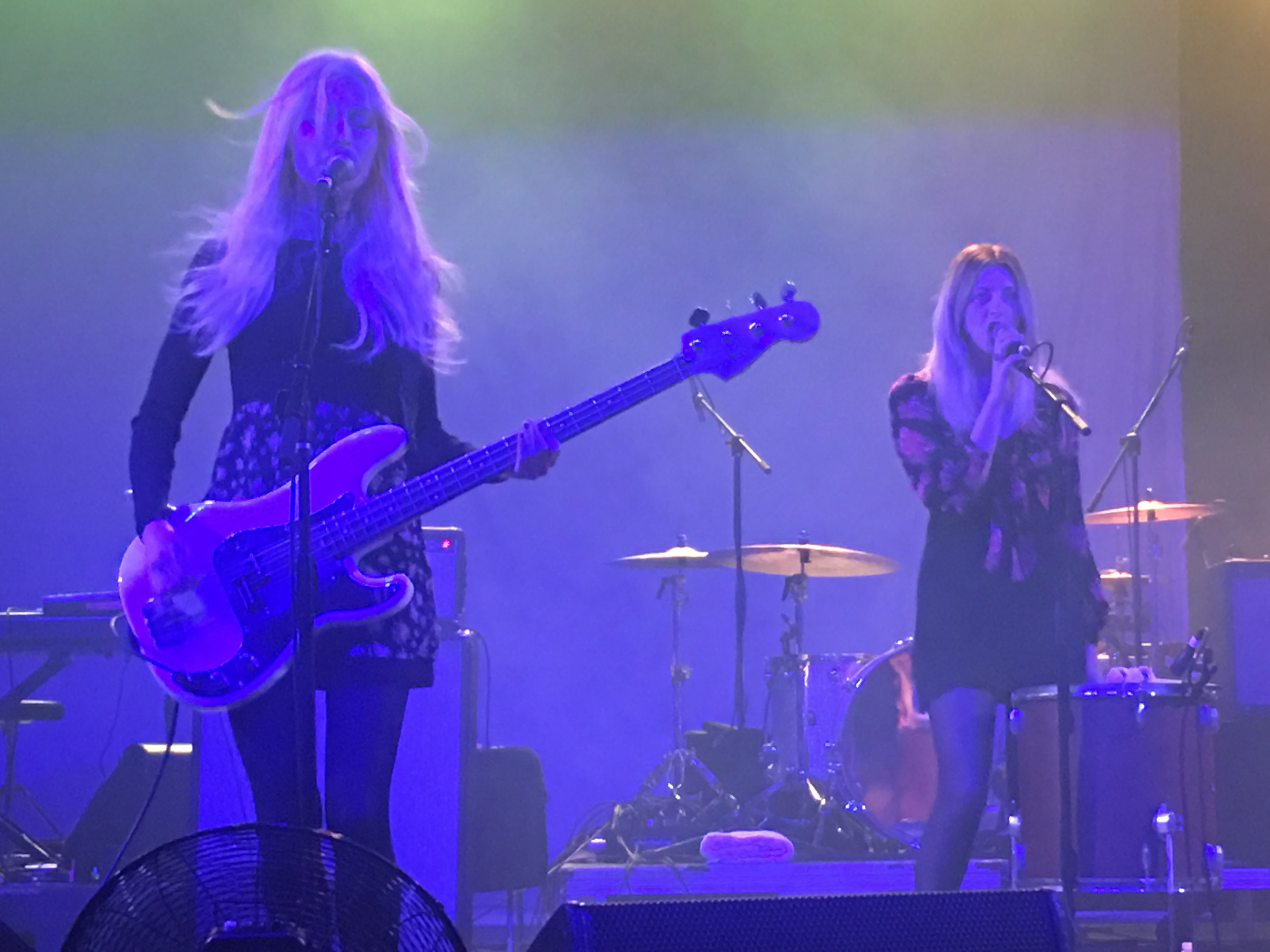 I pushed through the throngs of Goth Moms and New Romantic Dads to get to the front of the stage, just in time to catch the opening act: Jennie Vee. They were a 3 piece: lead singer/bassist, guitarist, and backup singer playing a floor tom. It was bass-driven, dreamy alt-pop that sounded like what would happen if you stuck the Vivian Girls, The Pains Of Being Pure At Heart, and the bass line from “Lucretia My Reflection” into a blender. They were pretty great, holding the crowd’s attention with a solid set. The songs didn’t have strong hooks, but the vocals were appealing and the music had a driving, propulsive force. Not a lot of interesting stuff happening onstage in terms of banter or theatrics, though. The singer (presumably THE Jennie Vee?) struck a great rocker pose with the stage fan blowing her hair around. All she needed was an explosion of glitter and some smeared eyeliner and the stage could have become the set for a Hole music video (which, to be clear, is not a slam: HOLE RULES). 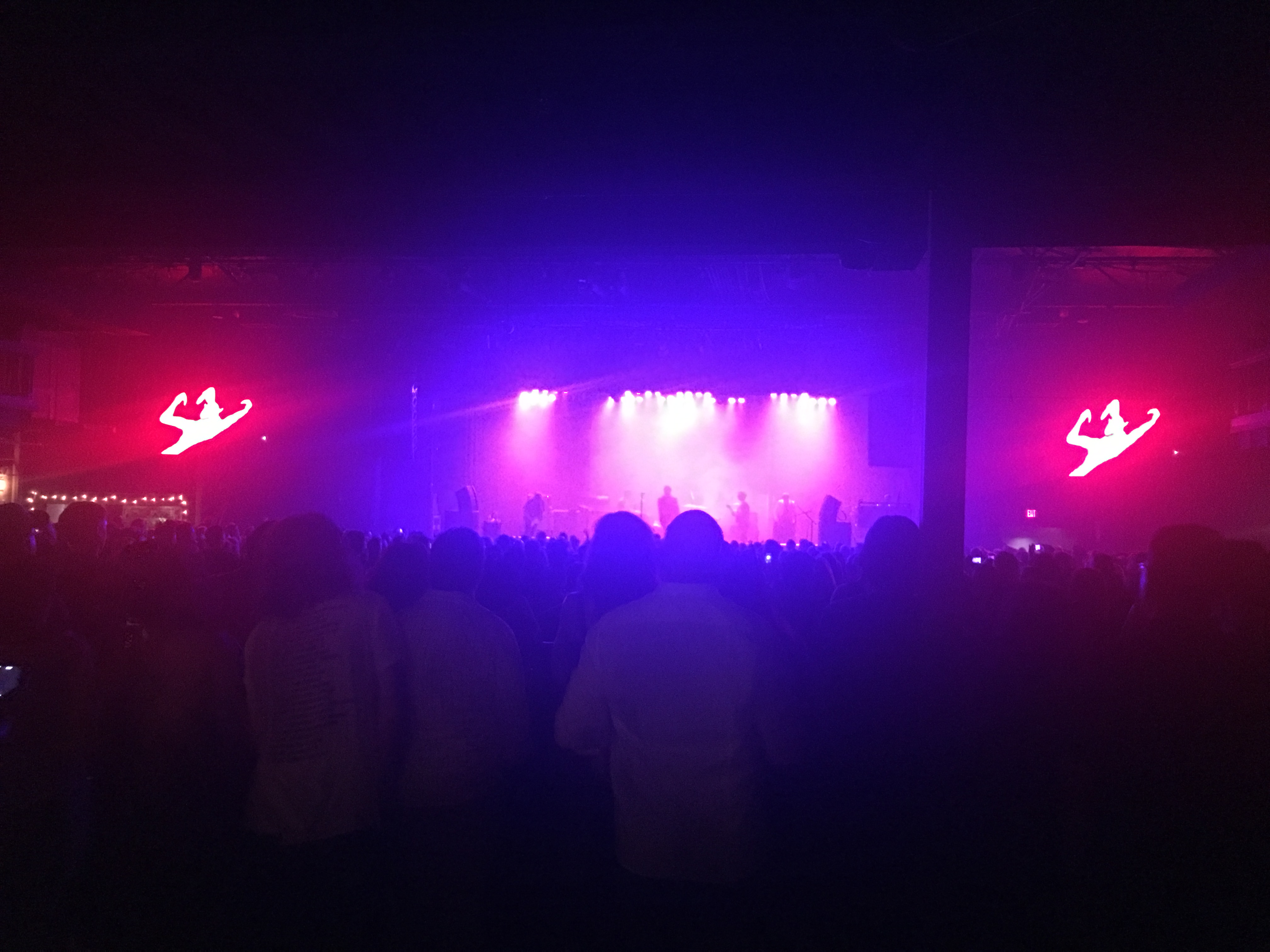 Shortly after Jennie Vee finished their set the headliners took the stage. They were bathed in alternating blue, orange, pink, and green lights that made them look like shadows onstage. Ian McCulloch, with his mussed-up hair and sunglasses, looked like the long-lost third Gallagher brother. While Noel and Liam were off somewhere calling each other potatos and cunts, here was Gallagher #3 talking to the audience in a voice so heavily accented that a few people around me kept saying “CLOSED CAPTIONING!” throughout the set. He walked slowly back and forth across the stage throughout the night, talking to band-mates, or drinking from red cups placed on a monitor. He looked every inch the rock star, but moved with the urgency of a man who’s put in 20 years of service at the DMV and has had it up to here with your shit. He moved like a man suffering from a headache so catastrophic that the slightest sudden movement could cause his head to detonate. 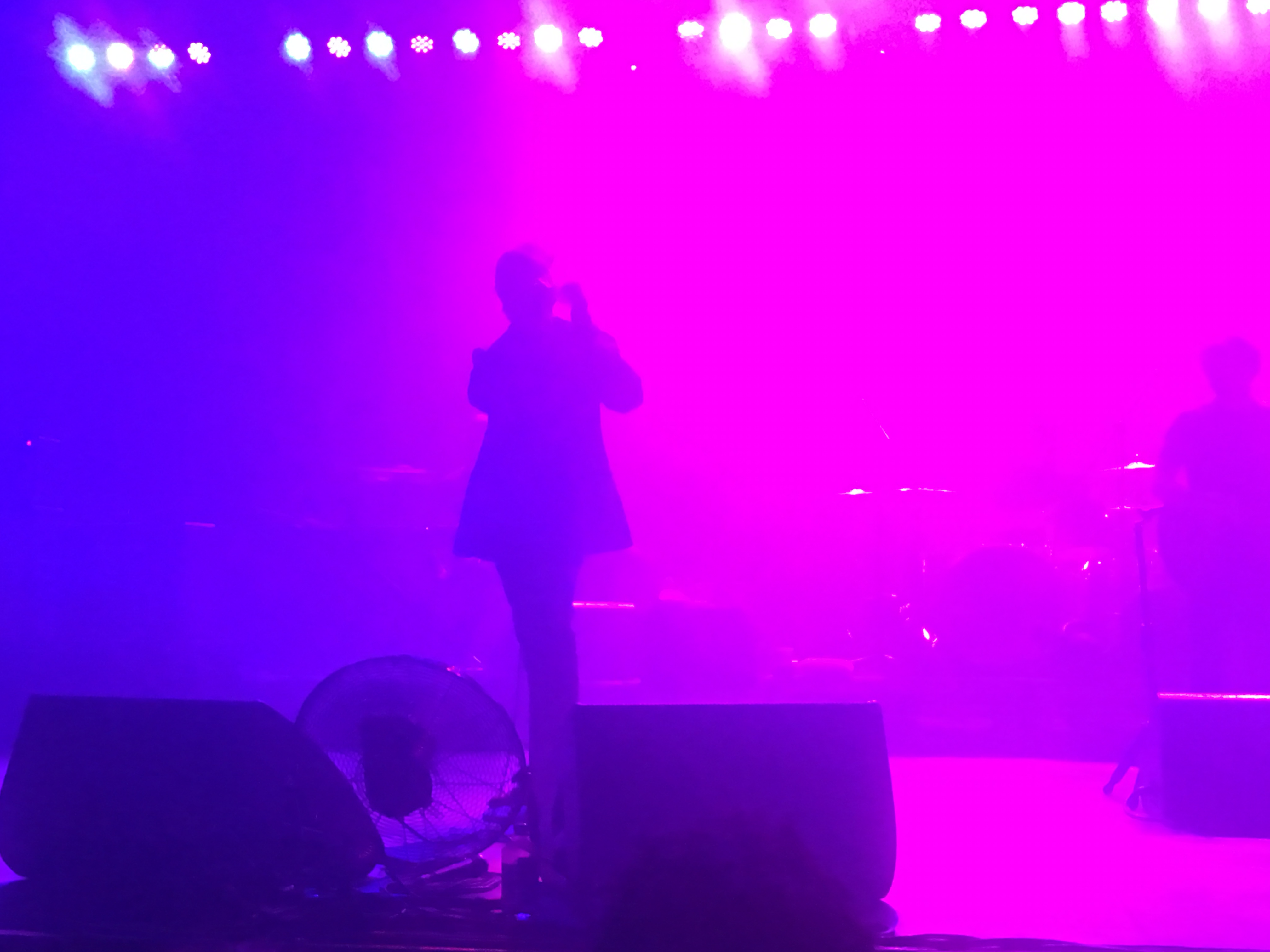 The Bunnymen played a long and solid set. And while they played some newer songs that the crowd politely applauded, they also played the hits that everyone came out to hear. Whenever Will Sergeant started playing the chords to an Echo classic like “Do It Clean” or “Rescue”, you could feel the energy in the room spike. People sang along and cheered and lost themselves in the music. At least they were losing themselves in the music; The band didn’t seem like they could be bothered.

Don’t get me wrong: The Bunnymen played a solid show… but they didn’t play a passionate one. This lack of investment could be heard most clearly in McCulloch’s voice. Echo & the Bunnymen are a band of many vital parts, but nothing is as key to their sound as THAT VOICE. It’s the key to their dreamy, romantic sound. McCulloch’s melodramatic, emotive voice brings the soaring emotions and crooners’ swoon that makes songs like “The Killing Moon” and “Bring On The Dancing Horses” stone cold classics. His voice on record walks the tightrope between cheesiness and self-seriousness in a way that no other post-punk singer from that era could manage. If any other band had brought in string sections like they did for “Ocean Rain”, they would have been dismissed for being pretentious wankers & gits. But a voice like McCulloch’s sounds right at home swooning over orchestral arrangements. It’s a voice too loud, too expressive, to be constrained by taste or reason. He has the essential ingredient that all great and awful karaoke singers have: The ability to commit 100% to a song, no matter how over the top it sounds. 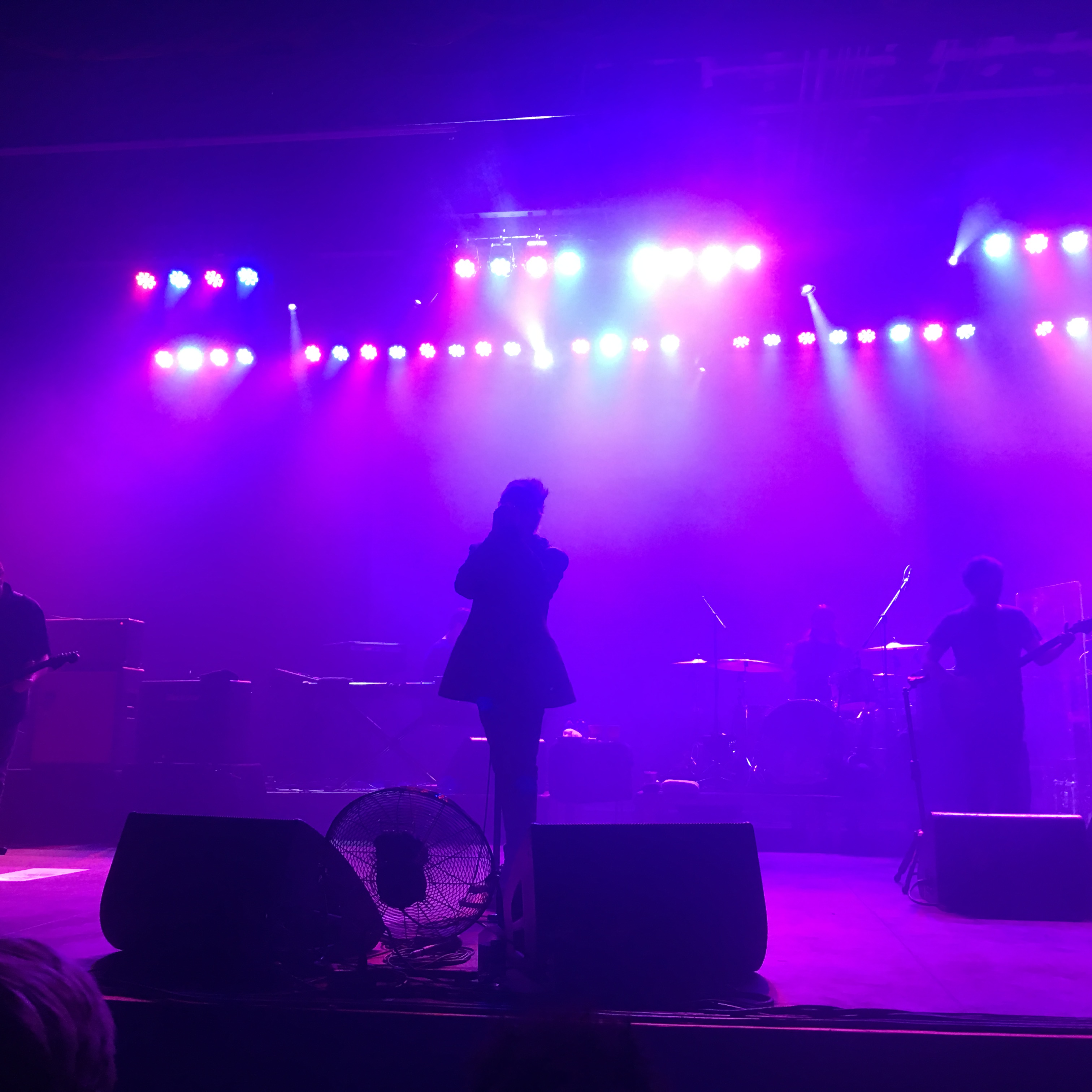 That voice must have been chilling out on the tour bus last night, because it wasn’t on the mic. The sweet surrender, the abandon you could hear in those old albums, wasn’t echoing off the stage. When McCulloch sang the verses to his most well-known songs, it was the same rich voice we all know and love. But when he got to the choruses, to the songs that required him to bring the melodrama, his voice didn’t soar; It stayed grounded. I could hear it in the way he sang the chorus to “Never Stop”, giving it almost the same energy and volume as the verses with none of the wails and emotion that makes the song one of their best. Or in the way he basically mumbled the hook to “My Kingdom”. On record the way he sings “king/kingdom kingdom kingdddddom” and stretches out that last kingdom like emo taffy is ridiculous and sublime; It’s not just my favorite moment on “Ocean Rain”, but probably one of my favorite moments from ANY Echo song. But there was no stretching, no taffy-pulling to “My Kingdom” onstage: Just McCulloch saying “king/kingdom kingdom kingdom” in a flat voice. No spikes on the EKG, just a flatline. 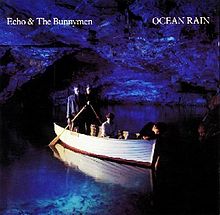 I’m probably alone in my disappointment. Everyone around me seemed to love the show, the crowd bursting into palpable joy when they closed their encore with “Lips Like Sugar”. When I left the show and drove home, I wondered if I was being unfair to expect a band that’s been around as long as they have to still sound like they did when they were first starting out. Maybe McCulloch CAN’T sing like that anymore. Maybe Father Time plucked the wings off his voice. Maybe he had a cold. Or maybe he doesn’t give a fuck. Perhaps he’s just clocking in to do his shift, and who am I to tell him how to do his job?

I had a cassette of “Ocean Rain” in my tape deck. I put it on as I drove home. “My Kingdom” came on and I sang along, remembering all the mixtapes I made with Echo songs, the friend who played “The Killing Moon” on the uke and sang it as a sweet reverie, or the time I wooed an ex by singing “Lips Like Sugar” to her at a karaoke bar, knowing that I sounded like a damned fool but knowing there was no other way to sing that song right. You had to walk that tightrope and hope to God you don’t fall on your ass by sounding like one. I just wished that Echo & the Bunnymen had played their music with as much heart as the people who love it, that McCulloch’s voice sounded like it NEEDED to sign those songs as badly as we wanted to hear them.

For more Phoenix coverage that doesn’t suck, follow PHX SUX on Suckbook and that tweety website for Twits