Cold Cave Proved that the Dead can Dance

The first time I saw Cold Cave play, it was around the time “Cherish the Light Years” came out. They were playing at a place called I.C.Y.C. (Inner City Youth Center) that I spent a half hour circling the neighborhood trying to find. It didn’t occur to me that the place wasn’t a LITERAL inner city youth center: I drove around, looking in vain for some kind of gym or school or YMCA-looking structure. Ariel Pink’s “Round and Round” played on repeat in my car (because I had just heard the song that day, and I couldn’t stop listening to it), and for a moment I wondered if I had made a wrong turn somewhere and ended up in Purgatory. Perhaps it would be my destiny to spend the rest of eternity circling around the same city block, trying to find a synth-pop show.

Eventually I found the warehouse, a great D.I.Y. space that just needed a few arcade games installed in it and it would have been a deadringer for the Shredder’s “Island of Lost Boys” warehouse from the first TMNT movie (where apparently bitchin’ skateboard ramps are the gateway drugs to becoming a ninja assassin). All that circling was totally worth it: Cold Cave was fantastic live. 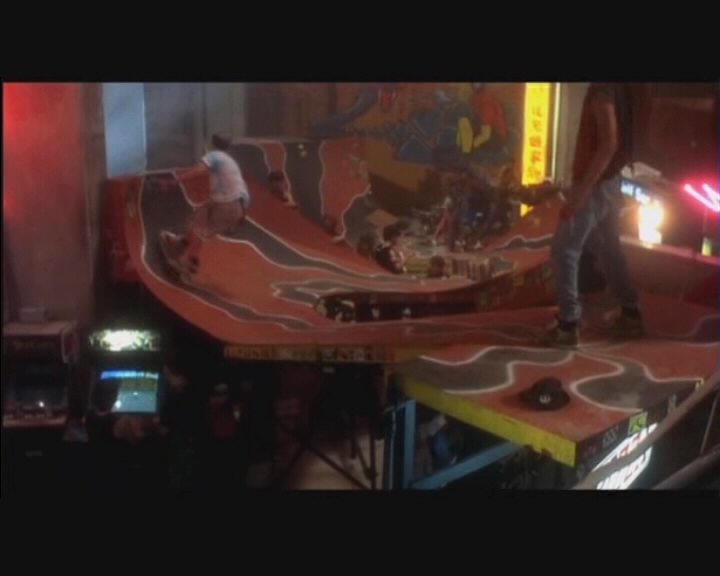 Driving to Crescent Ballroom last night, I was listening to “Round and Round” again. Not as an intentional choice: It came up on a random playlist, and I was listening to it a couple of times while enjoying a “oh-yeah-I-forget-how-awesome-this-song-is!” high. I didn’t take it as an omen that I would be taking a detour through Purgatory again, but I should have. 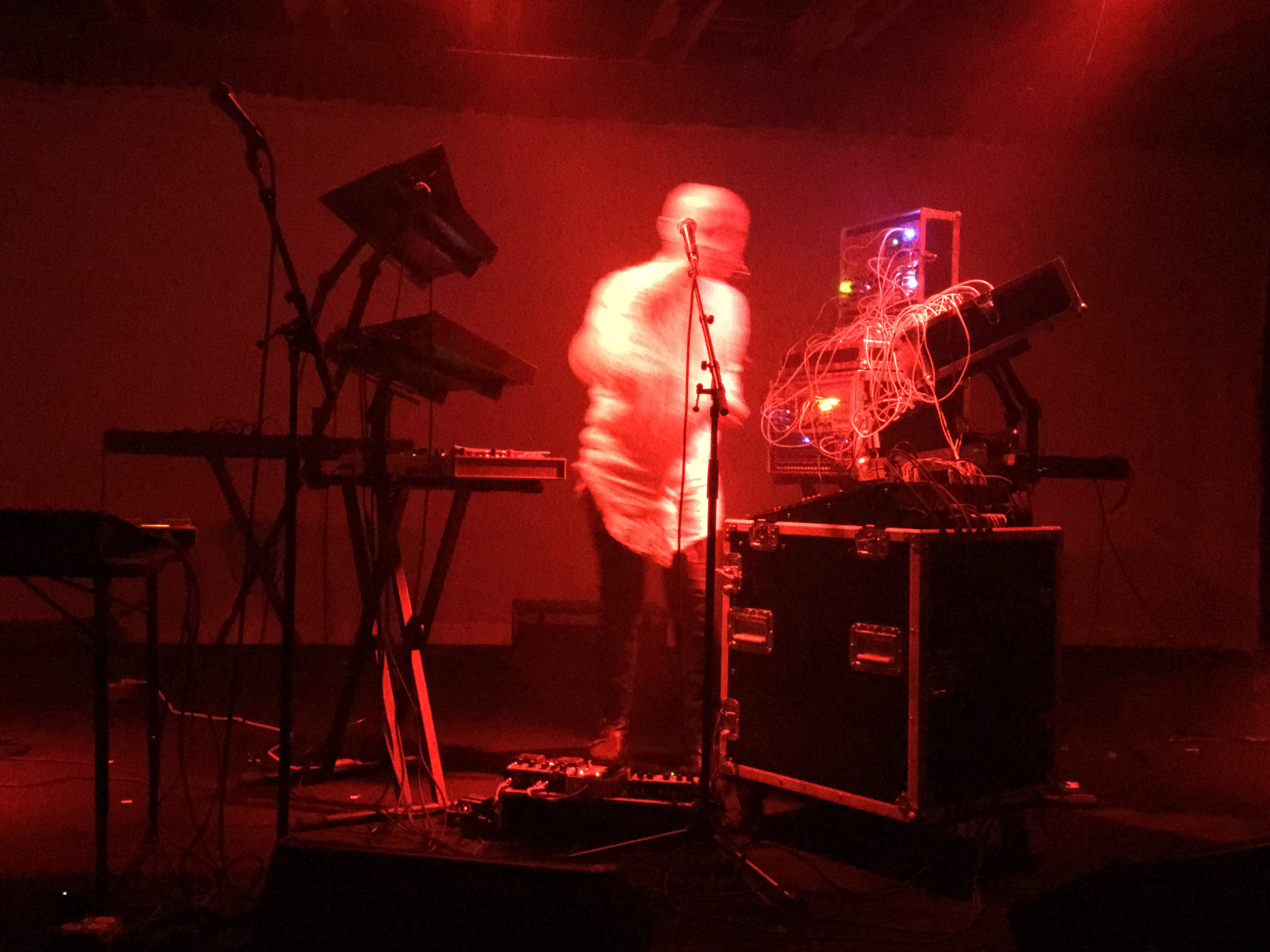 I got inside the ballroom just as A0n started their set. AOn was a solo act, working with a towering assortment of modular synths. He played a long but captivating set. His music didn’t so much as drone as it did throb. Sine waves pulsed and hissed, the music sounding like the production off of Massive Attack’s “Mezzanine” slowed to a deathly crawl. A disembodied faint voice (a sample, I’m assuming?) could be heard swooping over the music, reminding me of Kim Deal’s ghostly backing vocals on “Where Is My Mind?” The set was mostly instrumental, though the man behind A0n would occasionally step to the mic to sing-moan passages that sounded like forlorn incantations. Towards the end loud beats started kicking in, snapping as hard as a wooden door being kicked in by SWAT team members. 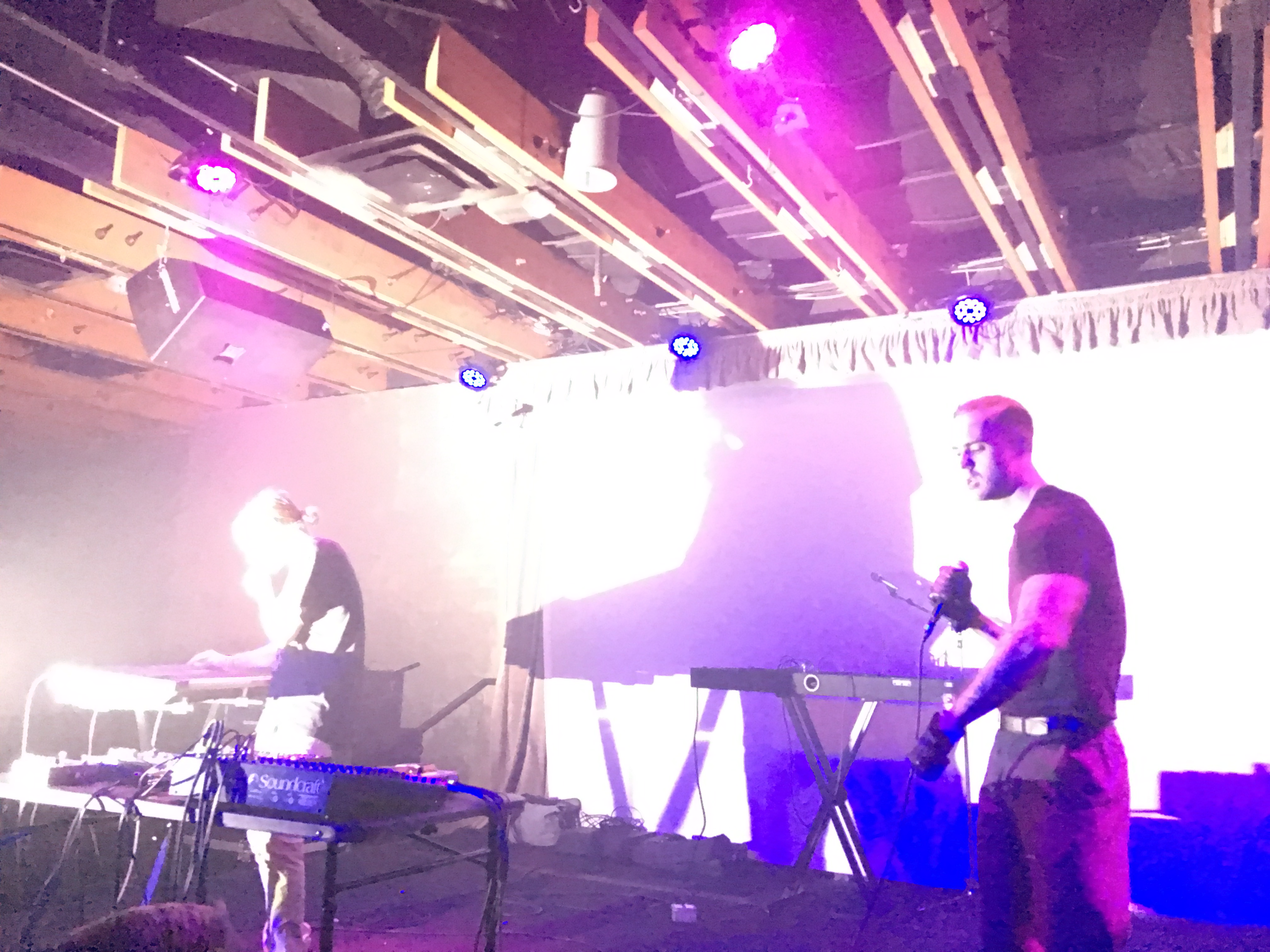 Shortly after A0n ended their set, Body of Light took to the stage and delivered a tight, free-your-ass-and-your-mind-will-follow set. They played dancey and infectious synth music: The kind of New Wave you could surf on molly. It was refreshing to see a band getting high off their own supply: They danced to their own music as hard as the audience did. 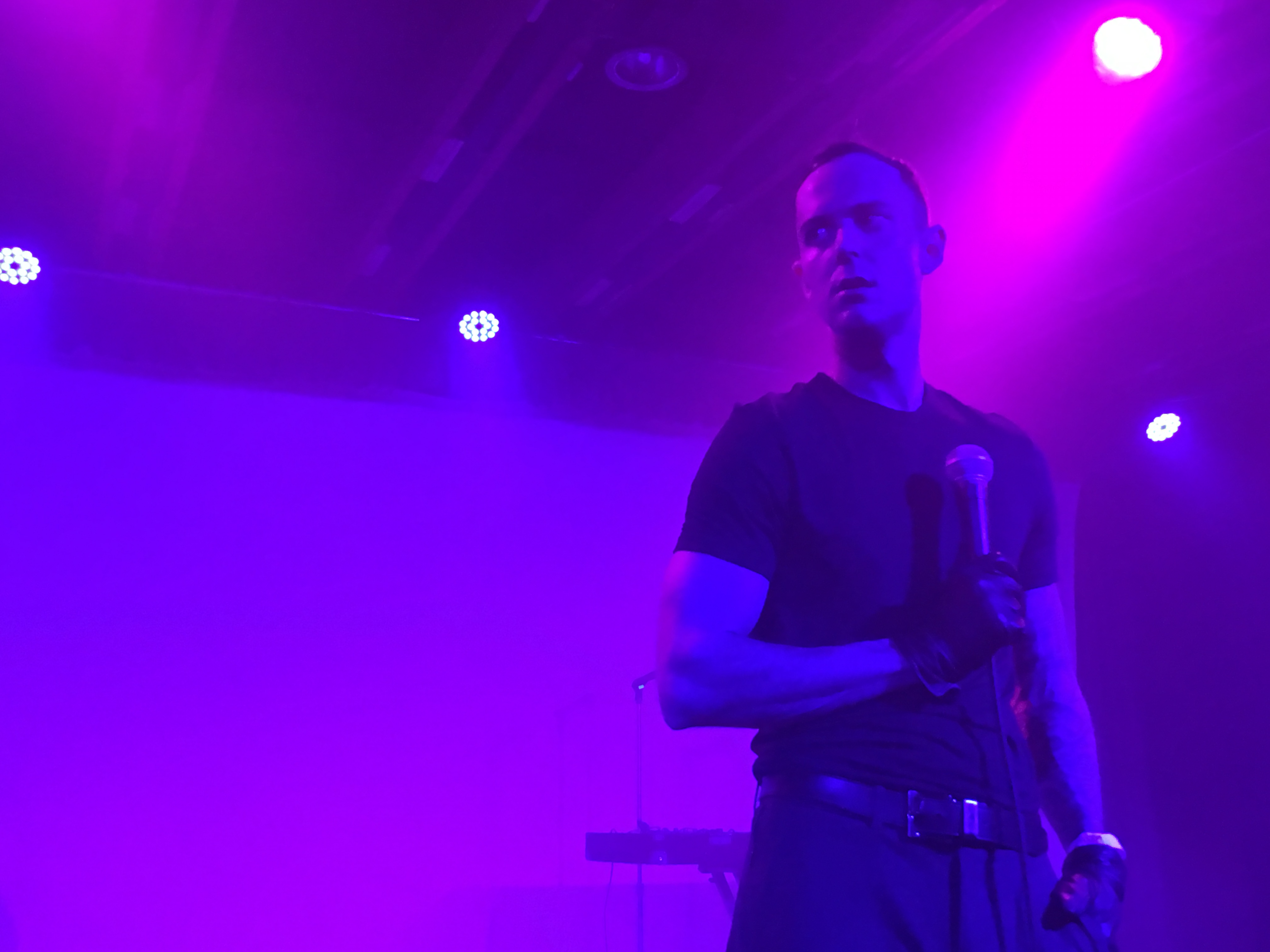 I’ve seen Body of Light a few times in the past, at warehouse shows and old Trunk Space gigs, and it was cool to see how comfortable they were on a bigger stage. And one can’t discount the fact that they just looked cool: The singer wore black gloves that would be right at home on an Italian race car driver’s hands, or on the fingers of a giallo killer. Or both: Somebody should write a script about a playboy Italian race car driver serial killer and get Body of Light to do the score. 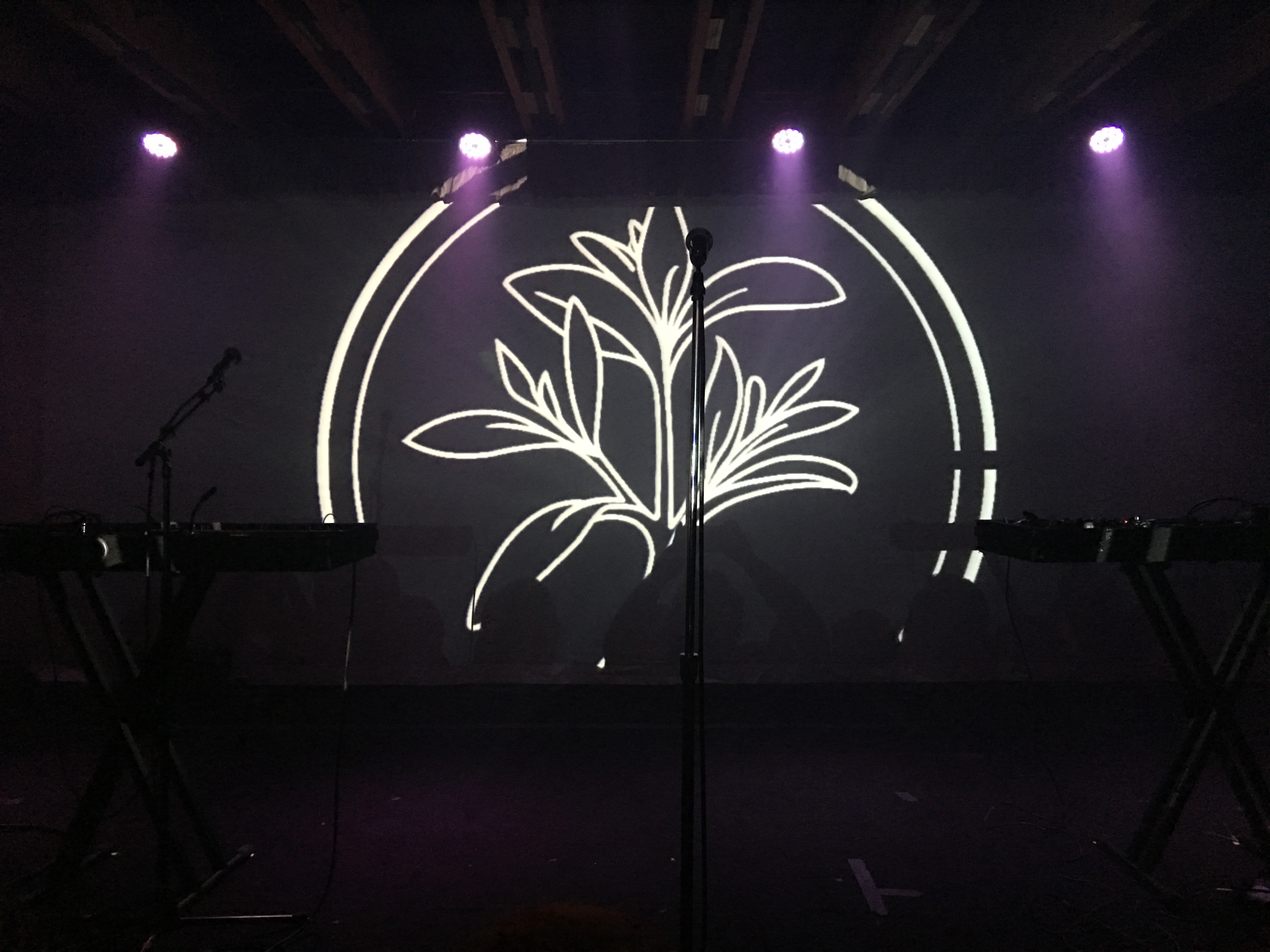 And here’s where the night briefly veered into Purgatory territory. After Body of Light finished their set, Cold Cave’s gear got set up (just two long synths and some projections). And then it just sat there, as we waited for them to come on. And waited some more. I could hear grumbling in the audience, and I couldn’t blame them. I can understand waiting for a band with a long set up, who has lots of gear loading onstage. But Cold Cave’s gear took not even five minutes to set up. The stage was set, but no band in sight. And as the clock started ticking closer and closer to 11, you could feel tension and impatience slowly bubbling up in the room. I wasn’t immune to it, muttering “Get on with it already” as we waited for them to emerge from the green room. “What are they waiting for?” was a question that seemed to tumble out of many lips. 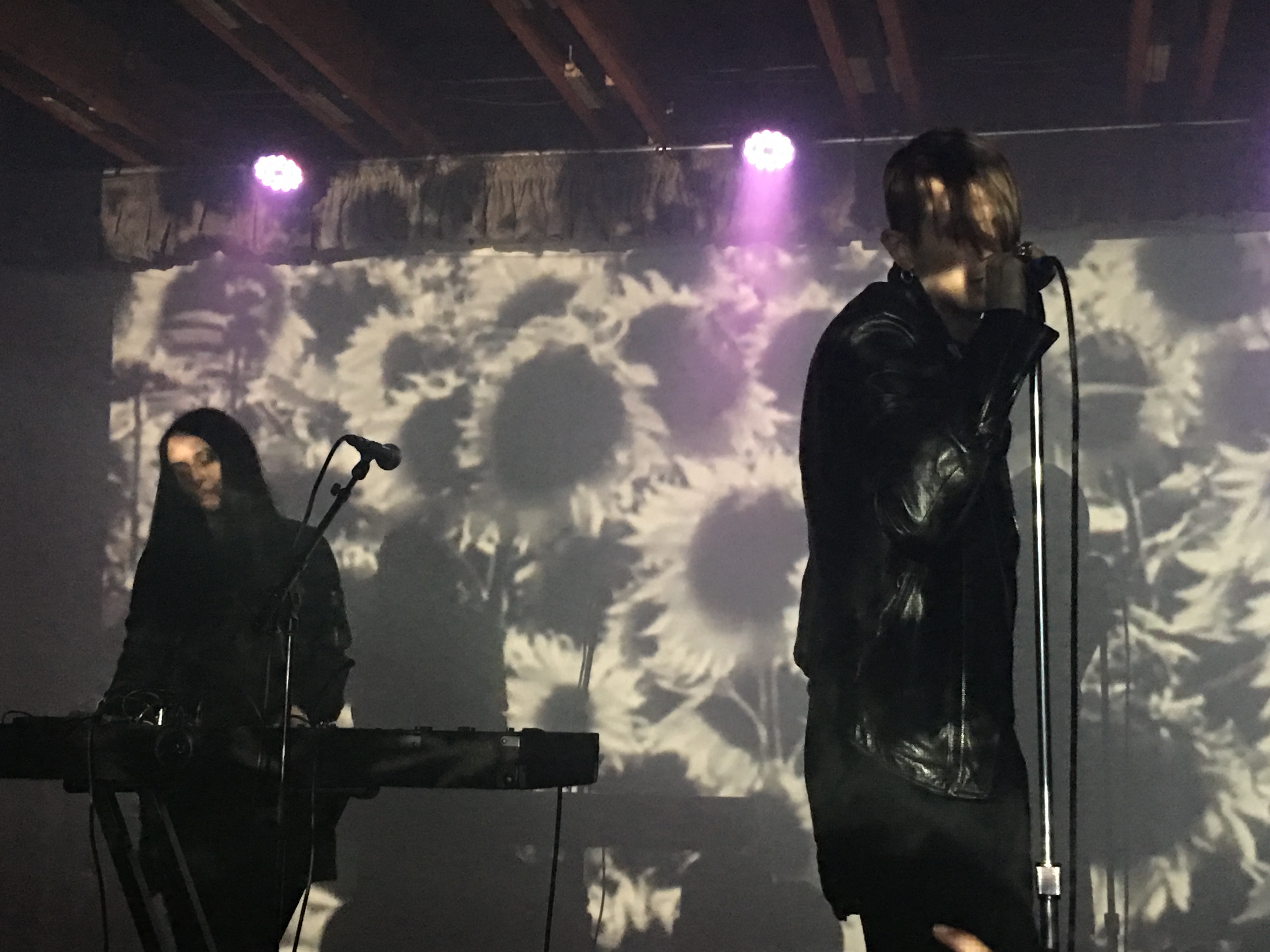 When Cold Cave finally took to the stage, I have to admit that I was feeling pretty sour. They opened with “Love Comes Close”, Wesley Eisold’s vocals sounding as subdued as his presence onstage looked. I didn’t have high hopes that this was going to be a good show. That quickly changed with the next song, as Eisold’s vocals got turned up in mix and it seemed like he turned himself up too. Eisold’s energy level skyrocketed and he turned into a compelling frontman, prowling the stage, leaning in close over the audience to sing into people’s faces. 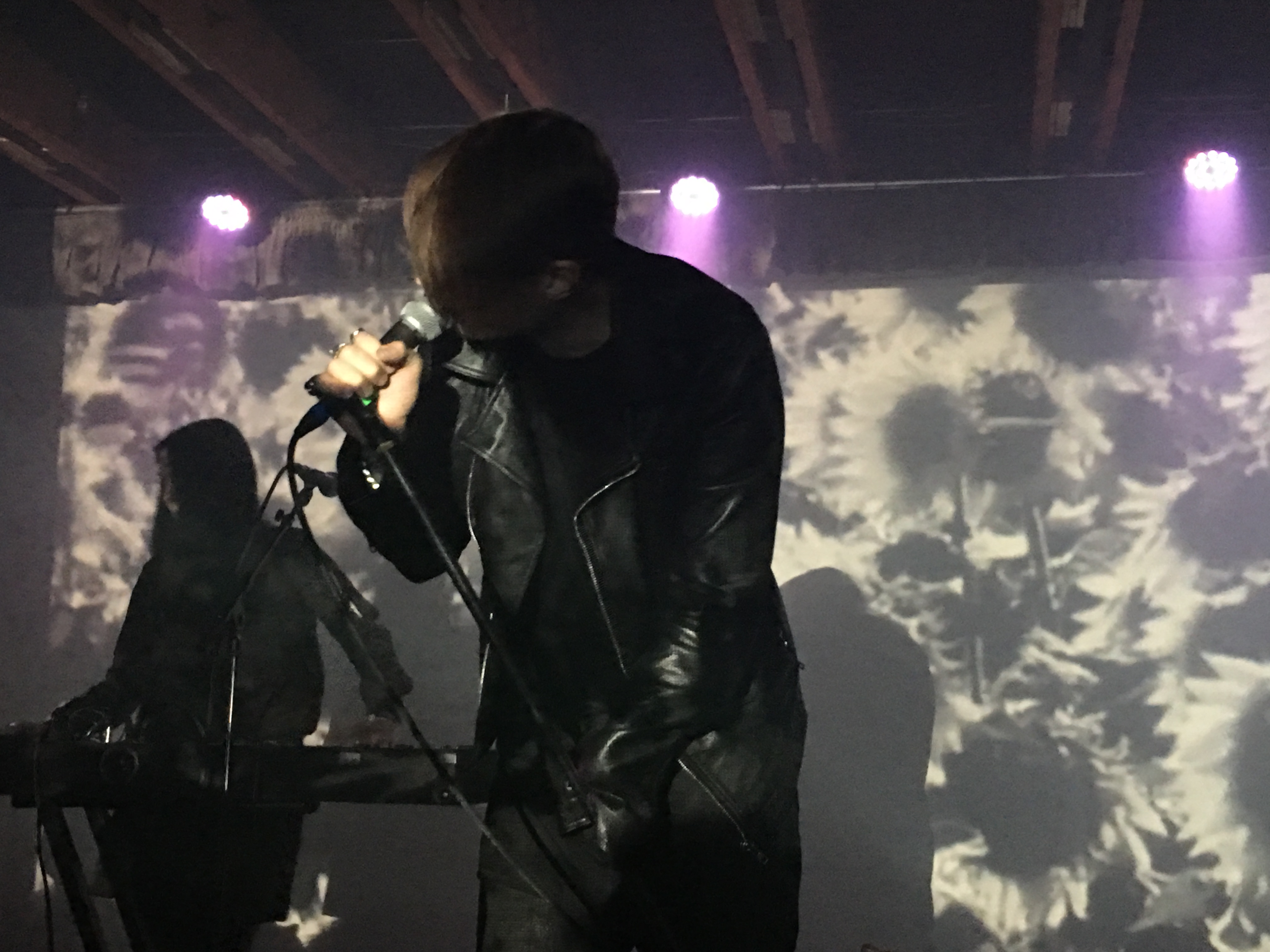 Whatever ill feelings I had dissolved: Cold Cave were worth the wait. They played a set that was heavy on “Cherish The Light Years” material, with a few more recent singles like “People Are Poison” and “A Little Death to Laugh” sprinkled in. They used different video projections to backdrop each songs. Cold Cave live don’t sound all that much different from Cold Cave on record: Just louder. But Eisold’s presence and the video projections made for a compelling stage picture, offering something that you can’t get by jamming to the tunes at home. 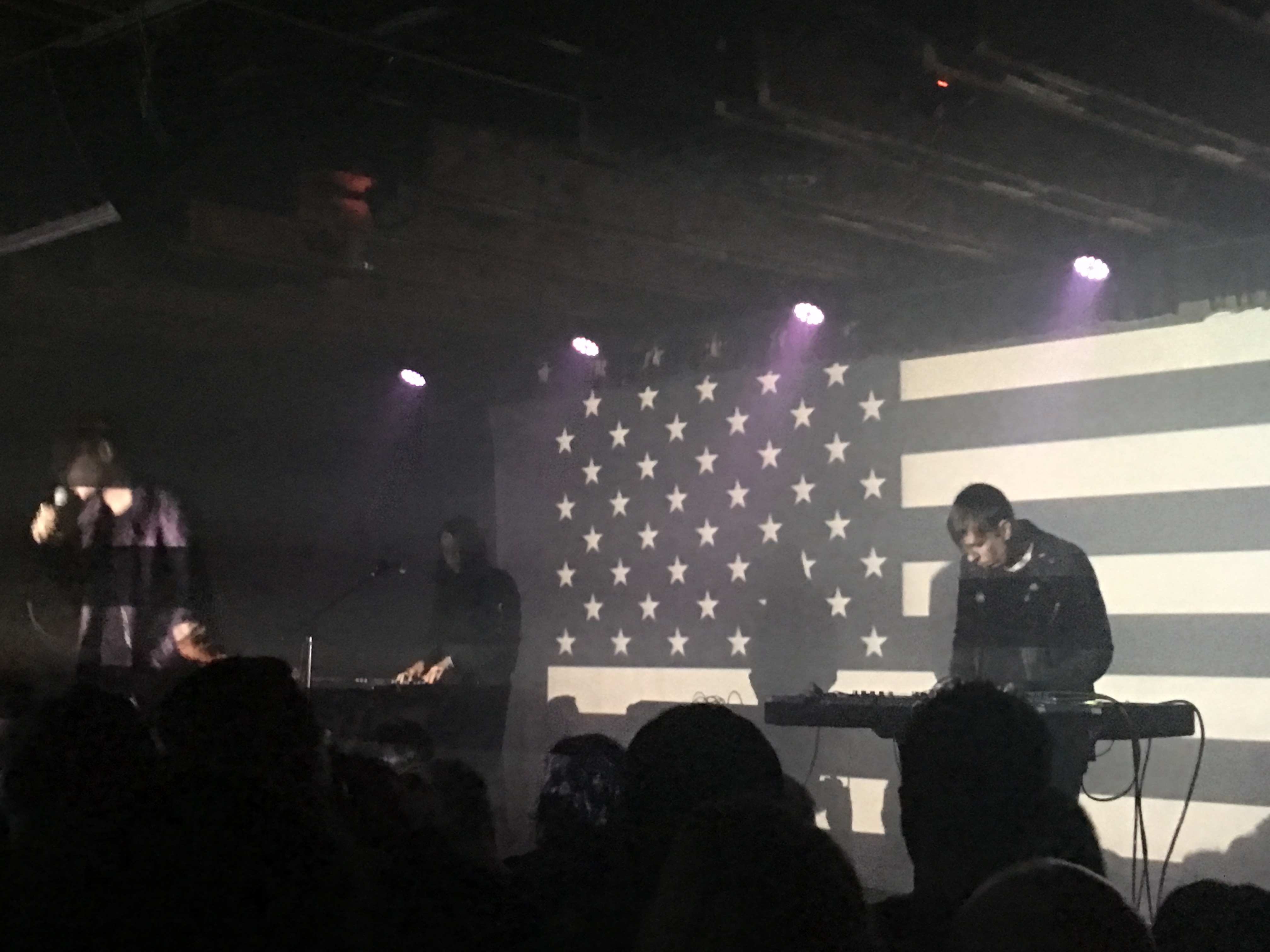 The night took a weird turn towards the end of their set when a fight broke out in the crowd during “Underworld USA”. A sudden and intense looking bout started up in the middle of the crowd, breaking up as the two fighters stormed out. “Are the two people who get to spend the rest of their lives saying they fought at a Cold Cave show gone?”, Eisold asked wryly. It makes you wonder what kind of dudes get THAT aggro at a synth-pop show. Did they have a bunch of leftover berserker rage from seeing Slayer the night before? Like they didn’t throw enough elbows to “Angel of Death”, so they had to crush skulls to a Nu-Depeche Mode jam? 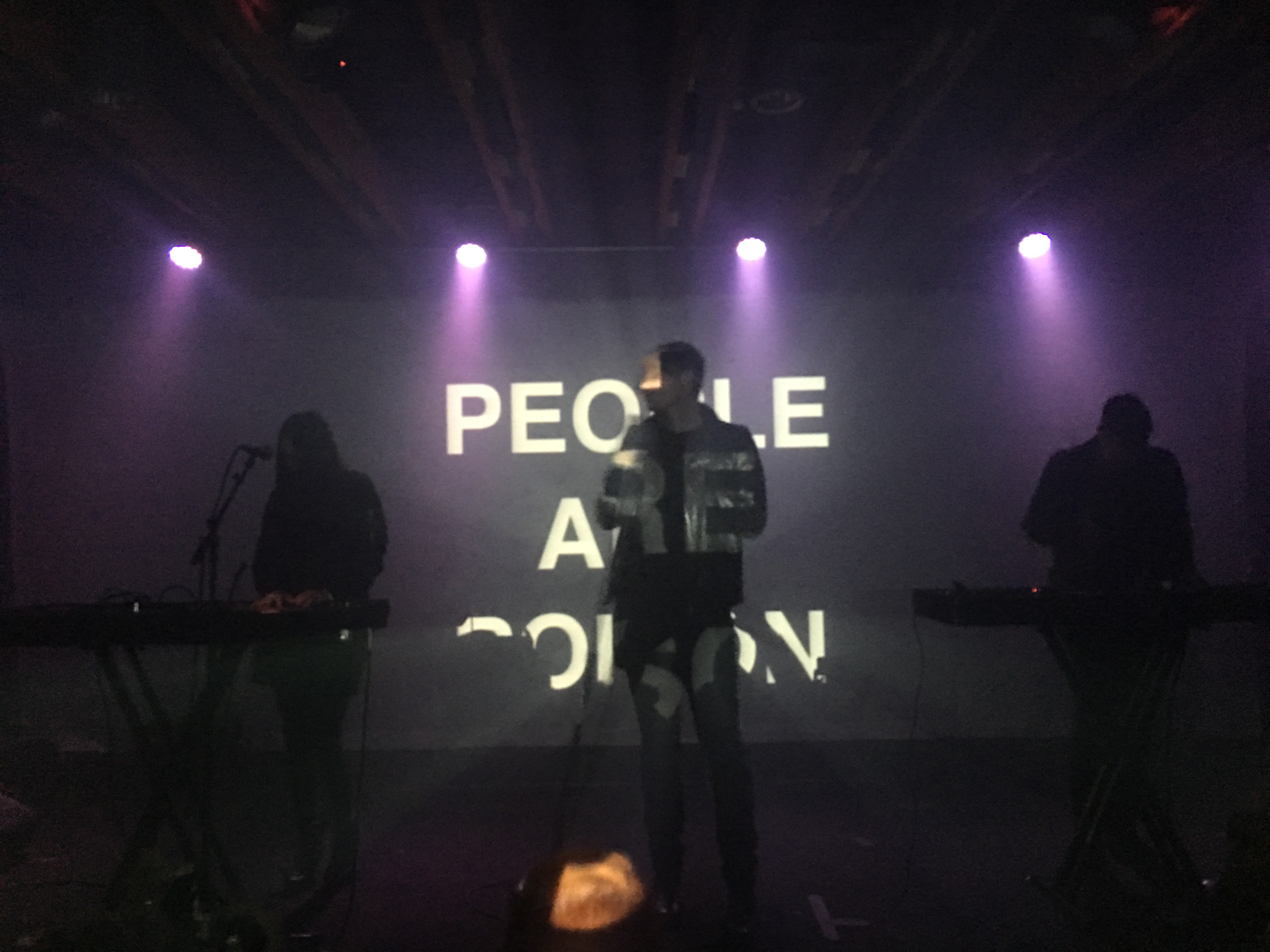 The band closed their set with the one-two punch of a deafening “Confetti” & “The Great Pan Is Dead”, coming back on after a few minutes to do a 3 song encore. Continuing the theme of Hilariously Inappropriate Crowd Behavior, some schmuck took the start of their first encore number as a good moment to rush the stage and execute the world’s most unimpressive stage dive. Stage dives in general rarely look badass; This looked more like a drunk trying to flop onto a hammock and eating cold concrete instead. I wonder if these are the same people who bust out “sweet” wind-mill kicks at Sufjan Stevens shows, or pound tequila shots and throw horns at ABBA tribute bands. 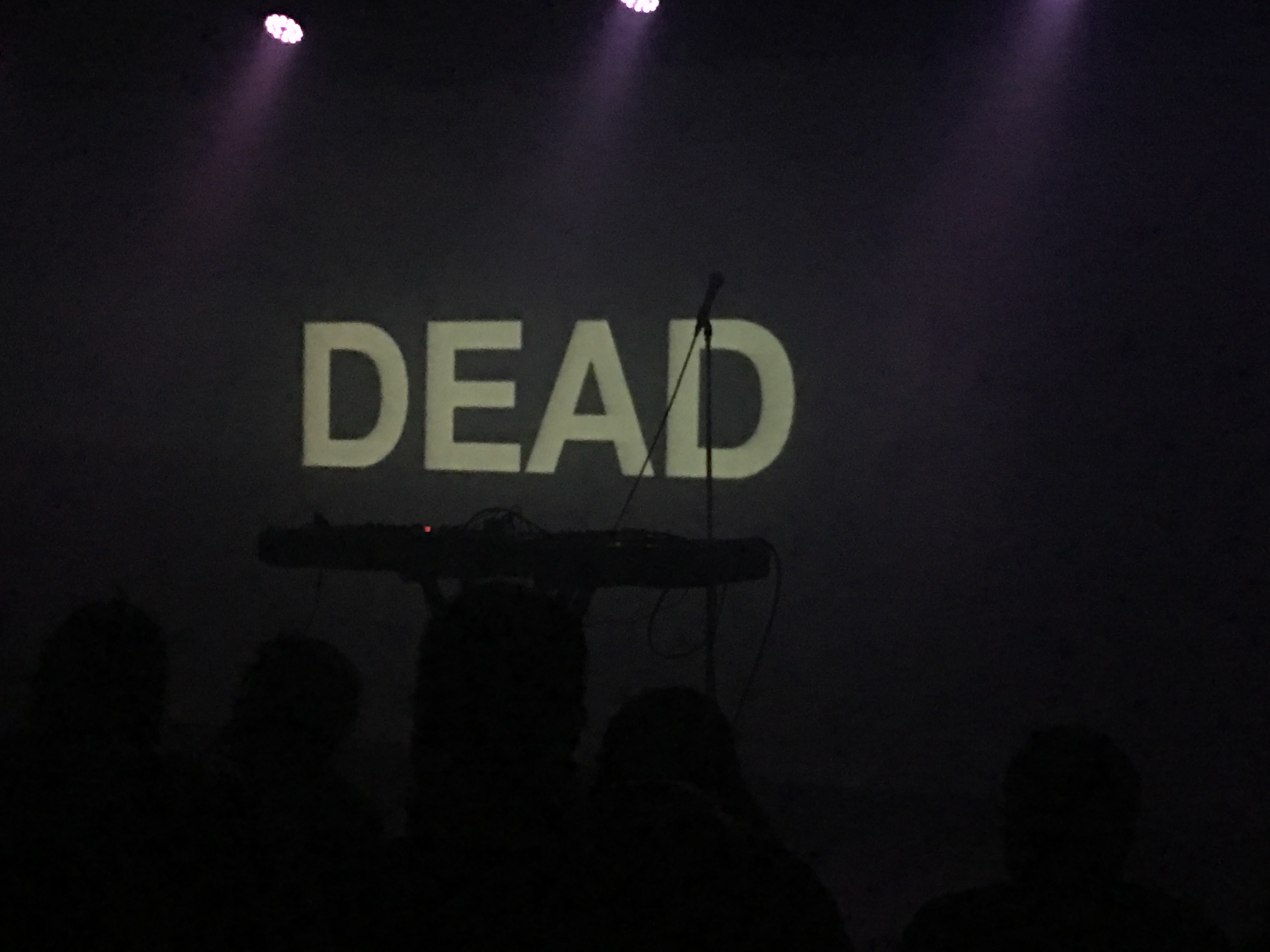 They ended their encore with two more “Cherish” songs: “Catacombs” and “Villains Of The Moon”. While all the “Cherish” songs sounded great live, “Villains” was the only one that sounded off. On record it has a surging, anthemic quality in the chorus; Live it just sounded kind of limp. That song aside though, the rest of their set was tight and on-point. My only regret was not wearing comfortable enough shoes to dance up a storm in, because they played music that makes you wanna cut a mausoleum’s rug.