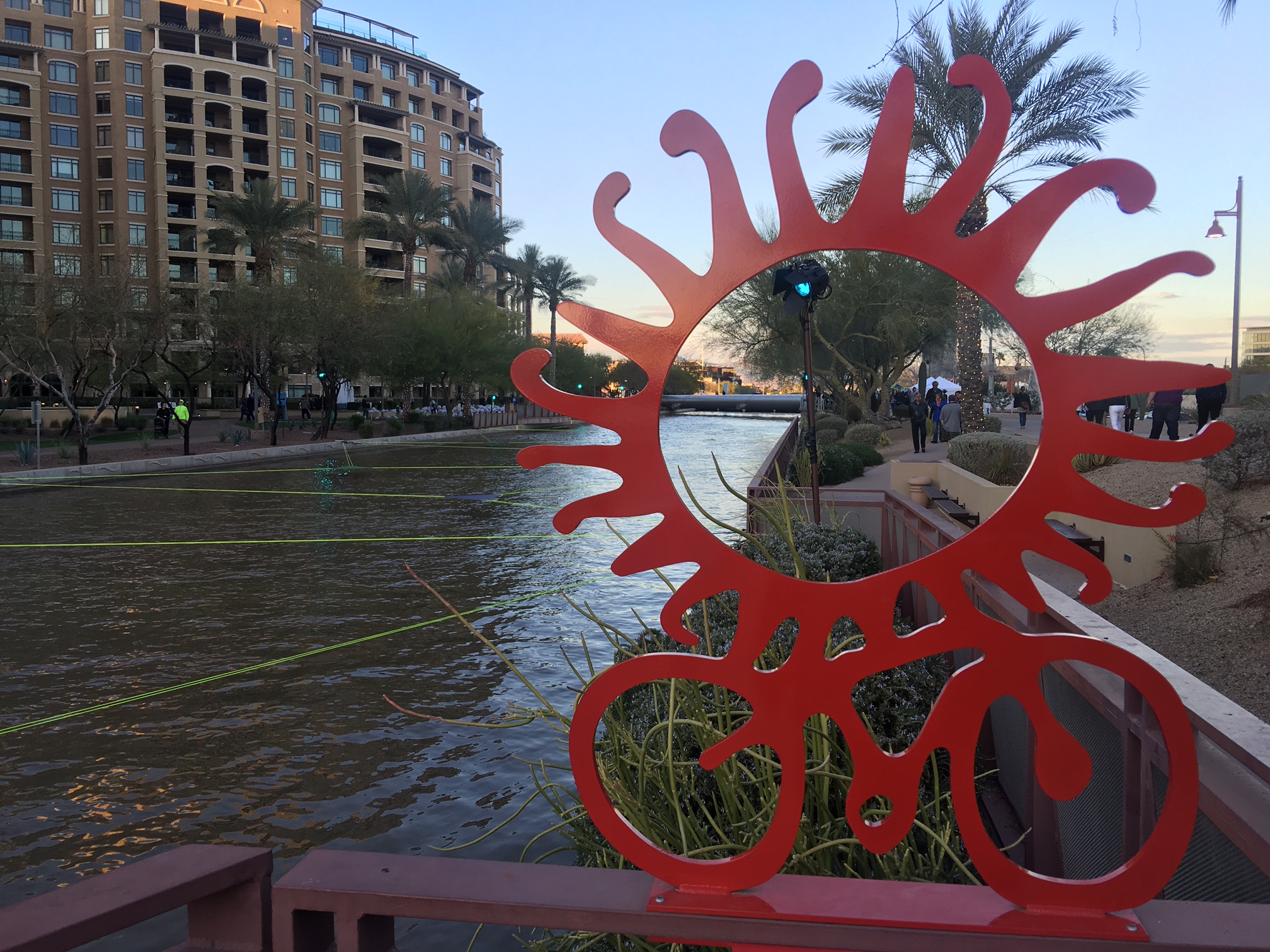 “Here lies one whose name was writ in water.”

While reading a poem inspired by Yelena Filipchuk and Serge Bealieu’s “HYBYCOZO” installation, poet Sally Ball quotes the writing on John Keats’ grave. Read out loud at an event conducted near the surging brown waters of the canal, dedicated to works of art that would vanish from the horizon the next day, it seemed like a sentiment perfectly suited for the moment. Here we all are, performers and spectators alike, to bear witness to beauty before it goes the way of all flesh. 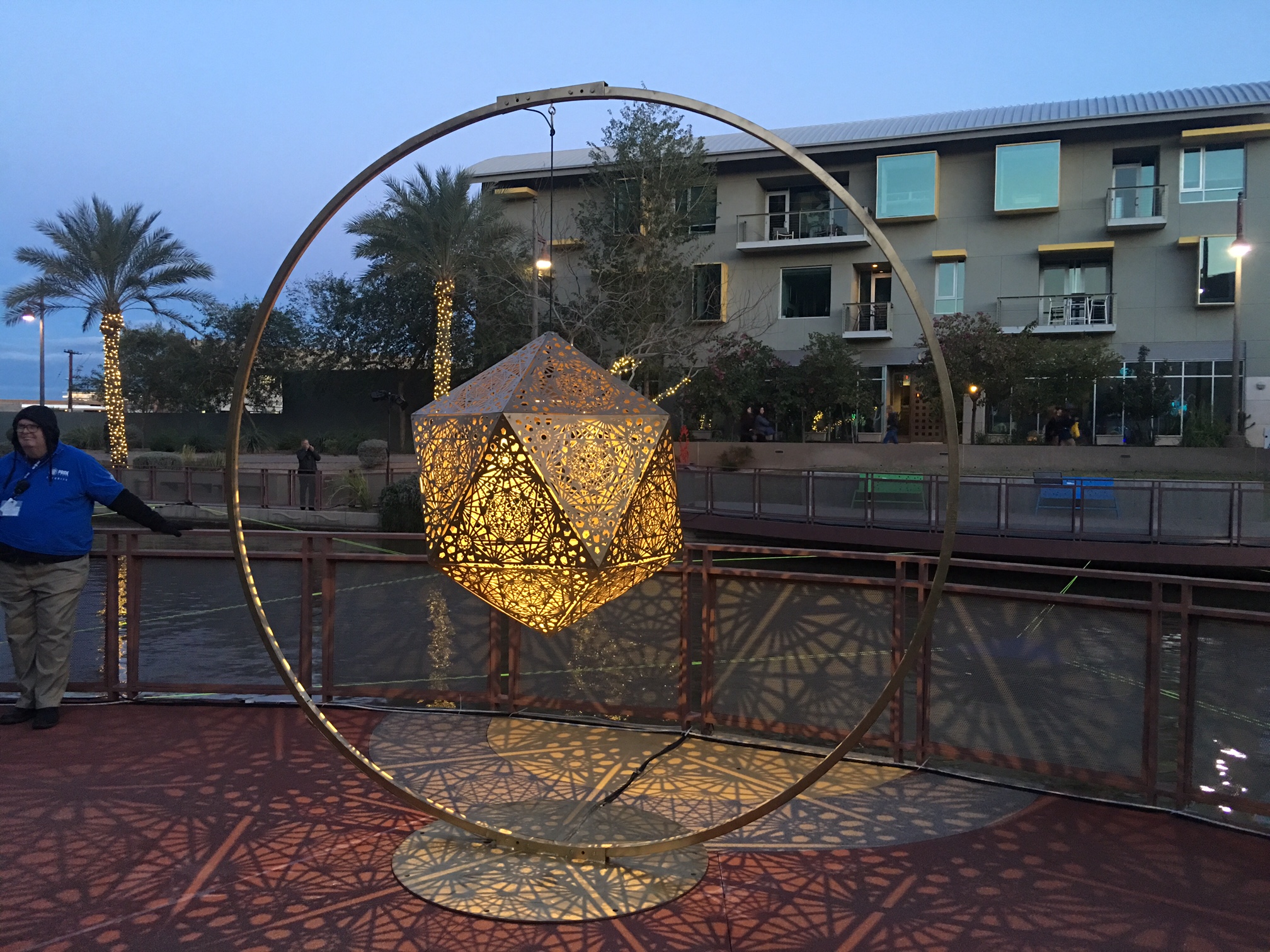 A stage is set up near the Soleri Bridge for the last day of the 2017 Canal Convergence, a four day festival of water, light, and art. A group of installation artists transform the canal into a glowing playground and walking gallery, giving people a reason to venture into Old Town Scottsdale to do something that doesn’t involve making regrettable life choices with Botox’d strangers. 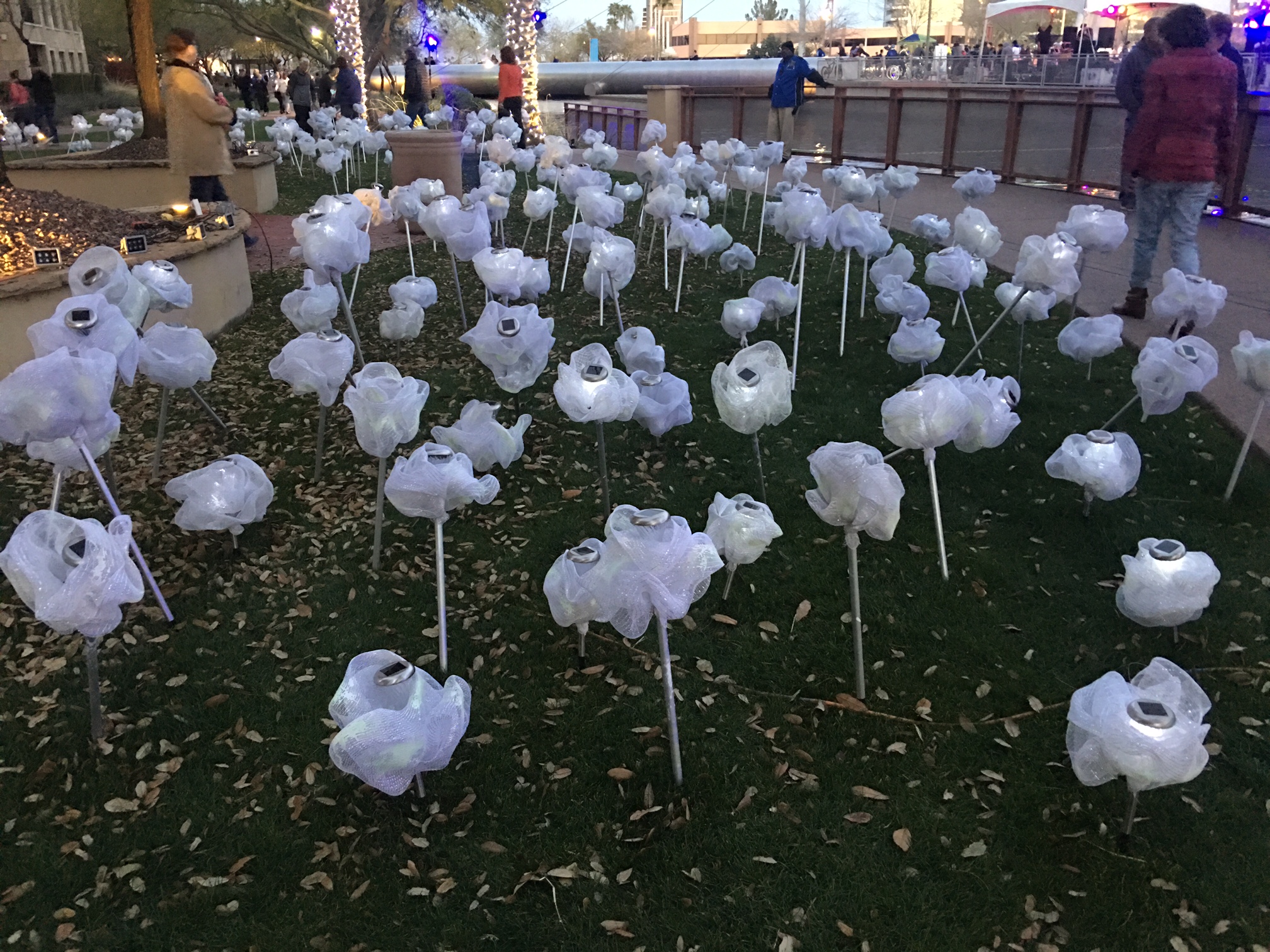 Four Chambers Press has assembled a group of writers to read original pieces inspired by the works of art on display around the canal. It’s an interesting and cacophonous environment for a reading: dogs bark, children shout “Ehrmagod!” over and over again, and nearby seesaws imitate musical tones that sound like vibraphones. The poets do a great job, considering all the distractions that swirl around them, reading dense pieces with evocative lines. I scrambled to scribble a few memorable lines as they talk into the mic, their voices slightly distorted by the persistent winds blowing through the area and crackling the mic like a standup comedian’s flop sweat shorting out a microphone: 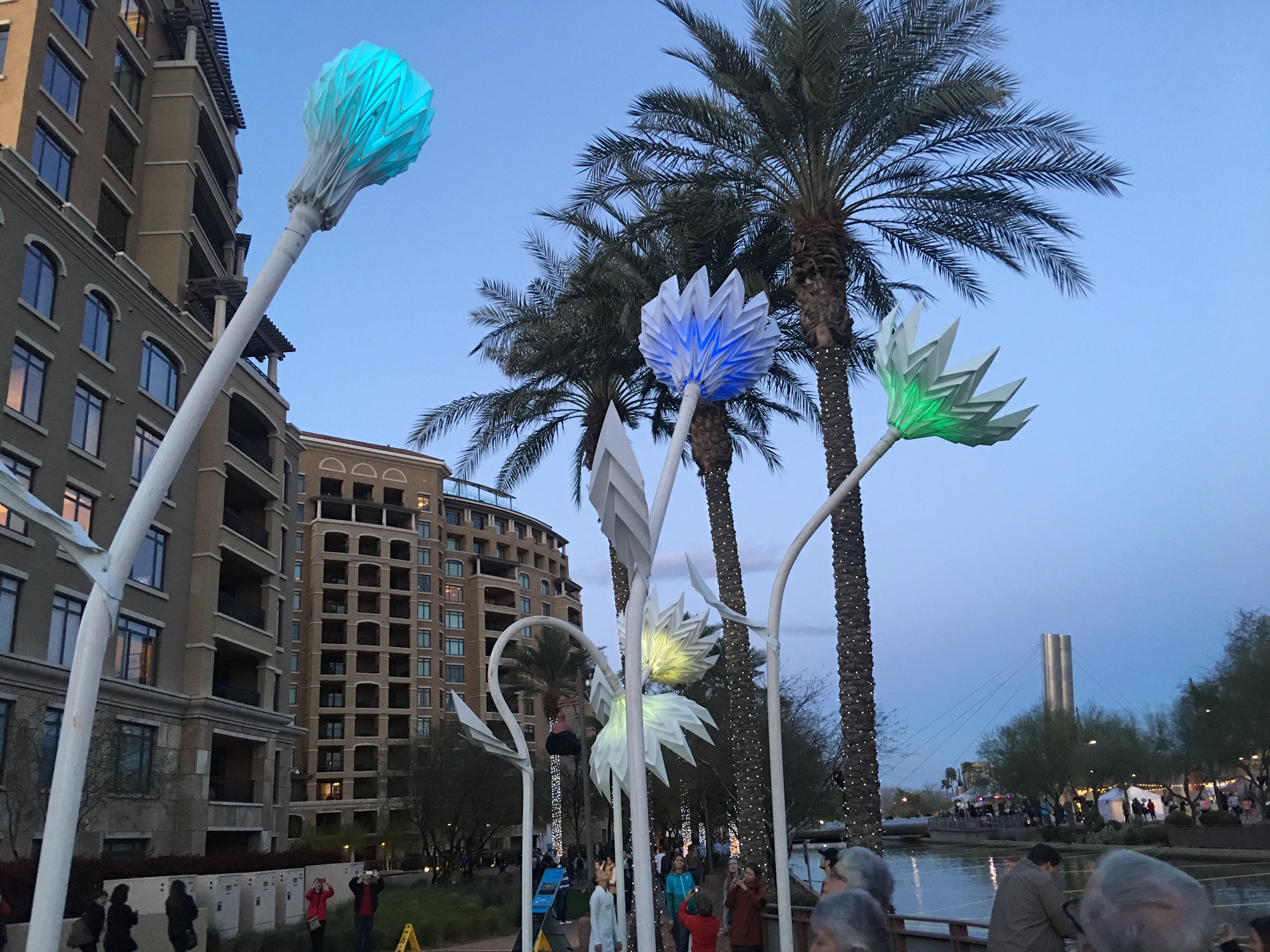 I don’t know why those particular lines stick out, but those are the words I took with me after Eloise Amezcua, Sally Ball, Alicia Brall (whose description of a pair of lips as “two slices like desiccated fruits” also lingered with me), Giancarlo Huapaya/Maggie Messerschmidt (the latter acting as an English translator for Huapaya’s Spanish langugage piece), Amy Lerman, Leah Marche, Dustin Pearson, and Michelle Salcido finished reading. As the audience started to drift away, I noticed an Elvis impersonator standing by the musical seesaws (IMPULSE, 15 seesaws who light up and make sounds when they’re being used). He was wearing a purple Superman T-shirt, and was probably the strangest sight I saw at this year’s Convergence. 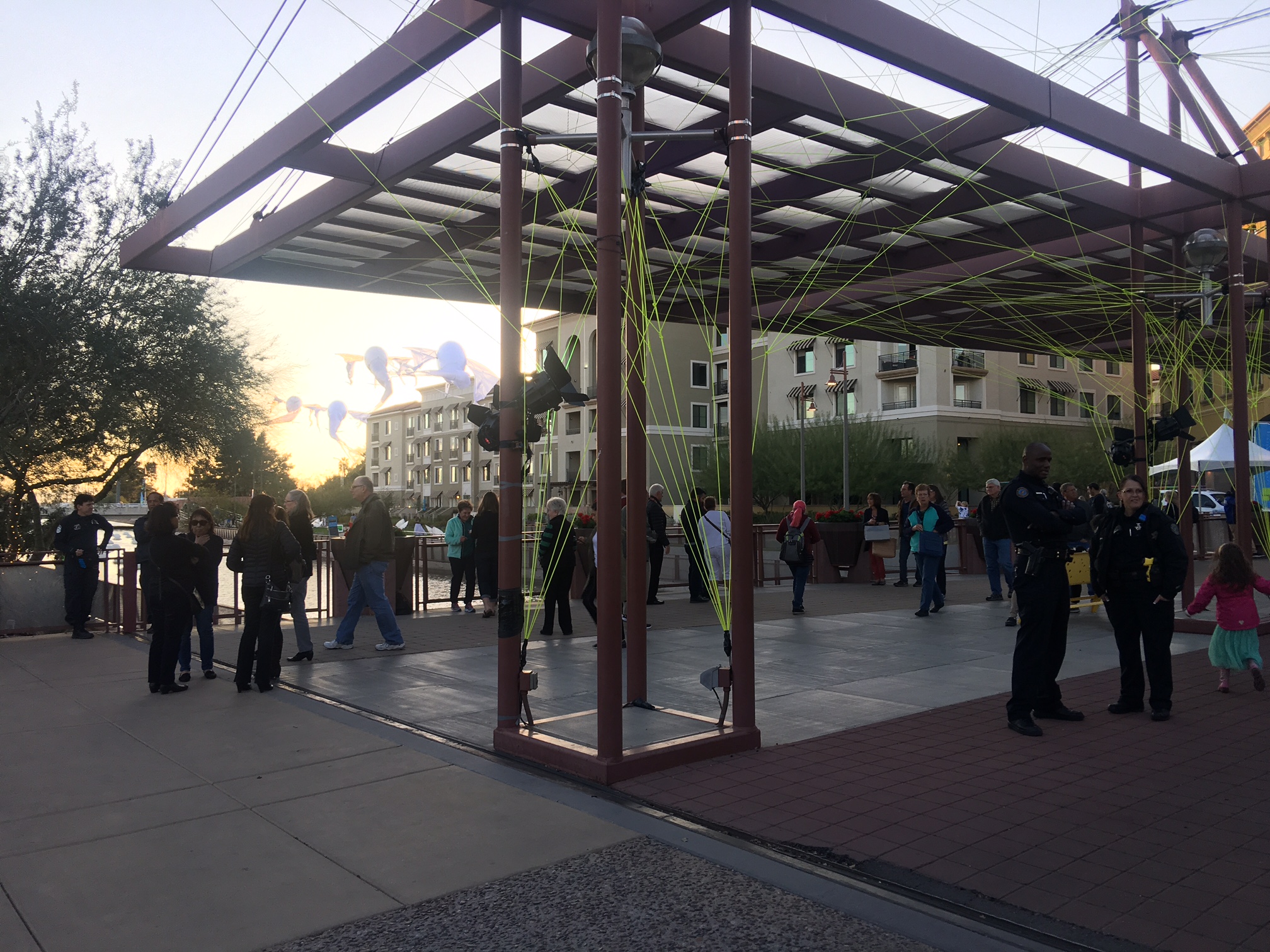 Walking down the canal as dusk approached, I saw thin neon green lines stretched out in geometric patterns across the canal. Lights were set up, cutting glowing blue lines into the brown water. The green lines and the patches of triangles where they intersected almost made them look like gigantic thongs or g-strings. A little further down from the green lines, orbs that shifted colors bobbed in the water, like an invasion of dim neon jellyfish. 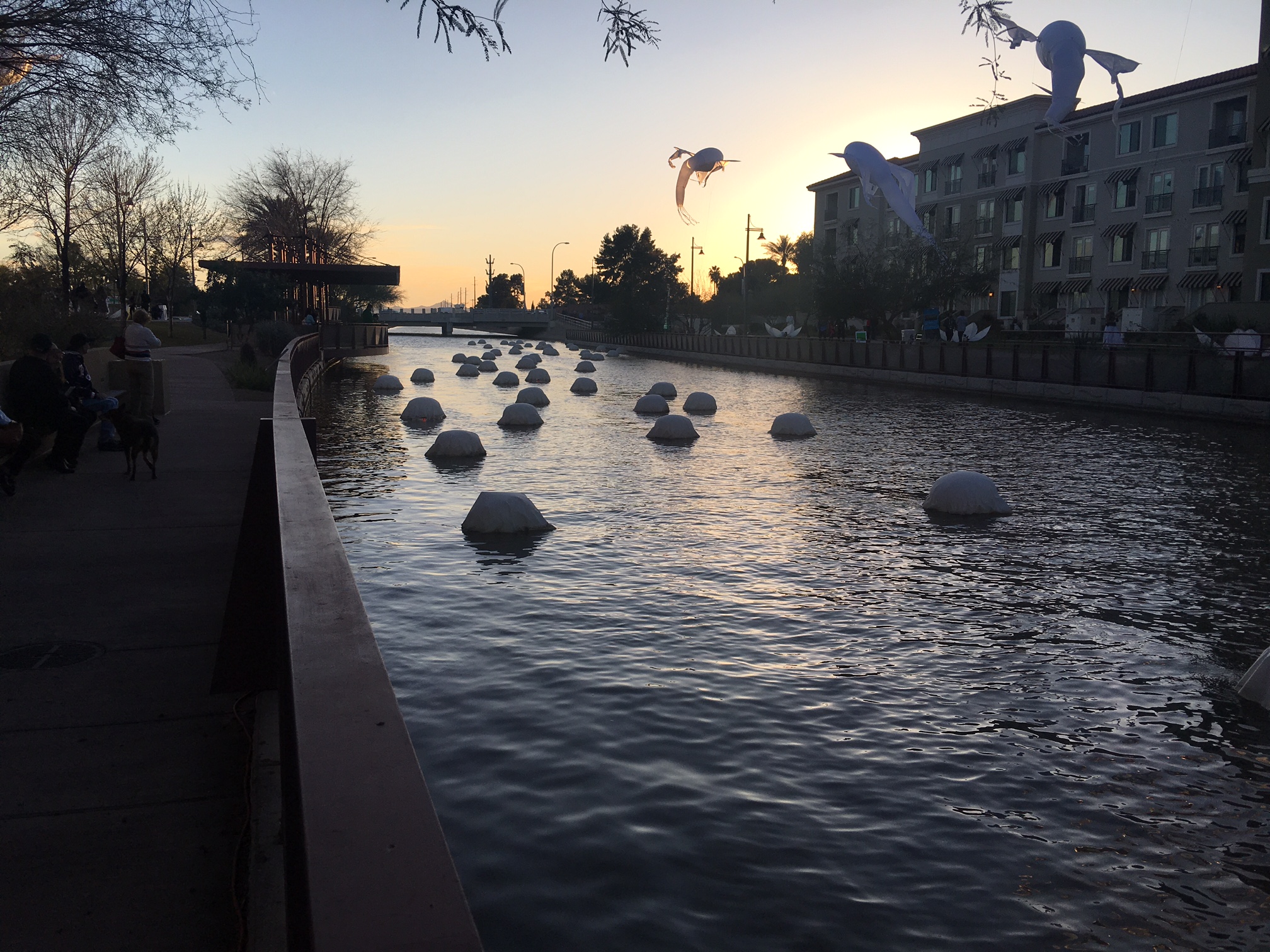 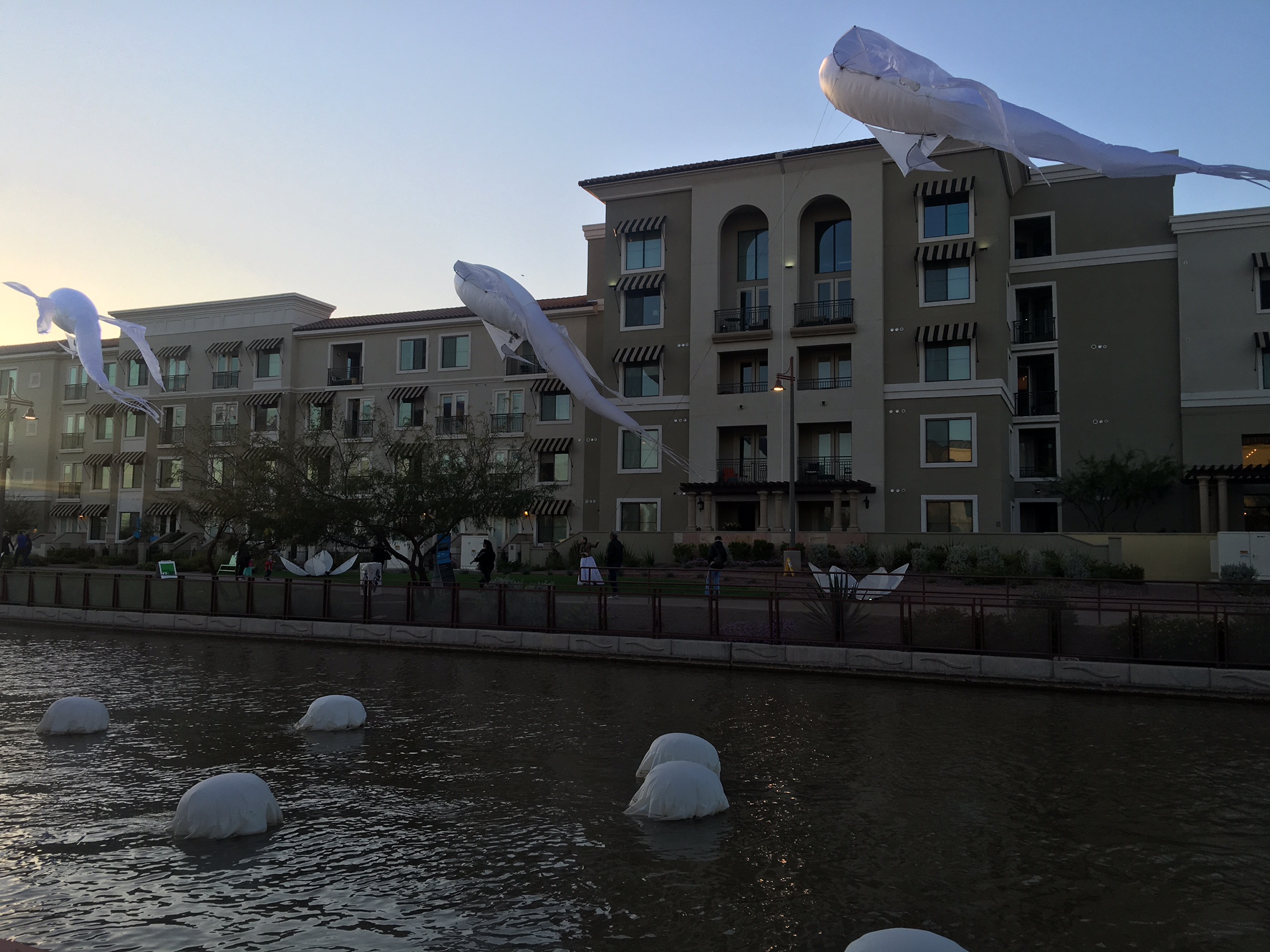 Swooping and drifting above the jellyfish were “Les Lumineoles”, the highlight of the Convergence. Huge helium balloons shaped to look like carp fish, they floated over the canal like ghostly whales swimming in the sky. I will confess that I didn’t get they were supposed to look like fish, at first: a friend pointed it out to me later. To my eyes, they looked like… well, giant winged sperm cells. It gave me flashbacks to that issue of Grant Morrison’s “The Filth” when an army of giant sperm cells attacked Los Angeles (if you’ve read “The Filth”, you’ll know that’s like the fifth craziest thing to happen in that book). Considering the water theme, it made perfect sense that they were supposed to be fish… but a part of me still wonders if their questionable shape was intentional. How subversive would it be, to get funding to decorate a city’s skyscape with a fine art moneyshot? Let’s be honest: if there’s any place in the Valley of the Sun where having gigantic avant-garde sperm floating in the air was appropriate, it’d be in Old Town Scottsdale. Just imagine if one of these things escaped, swam to downtown Phoenix, and collided with “Her Secret Is Patience”… what would that installation art baby look like? Crossing the canal, I trudged down the underpass where the colorful and vivid “Canal Creatures” mural was located. Artists Isaac Caruso and Ashley Macias were still at work, adding more details and creatures to their densely populated underwater mural. The sun was setting, and the jellyfish in the water started to glow brighter to greet the rising of the moon. 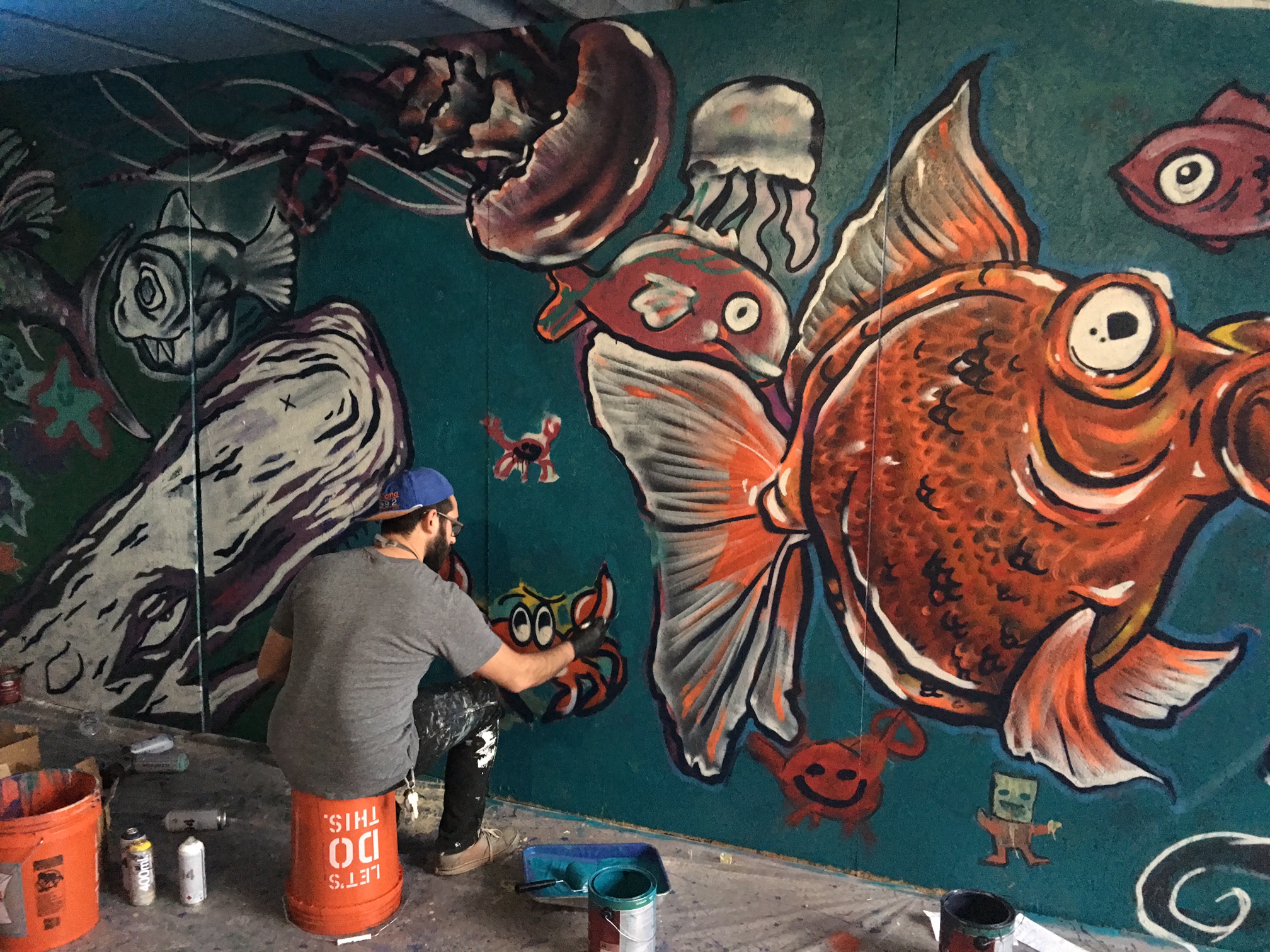 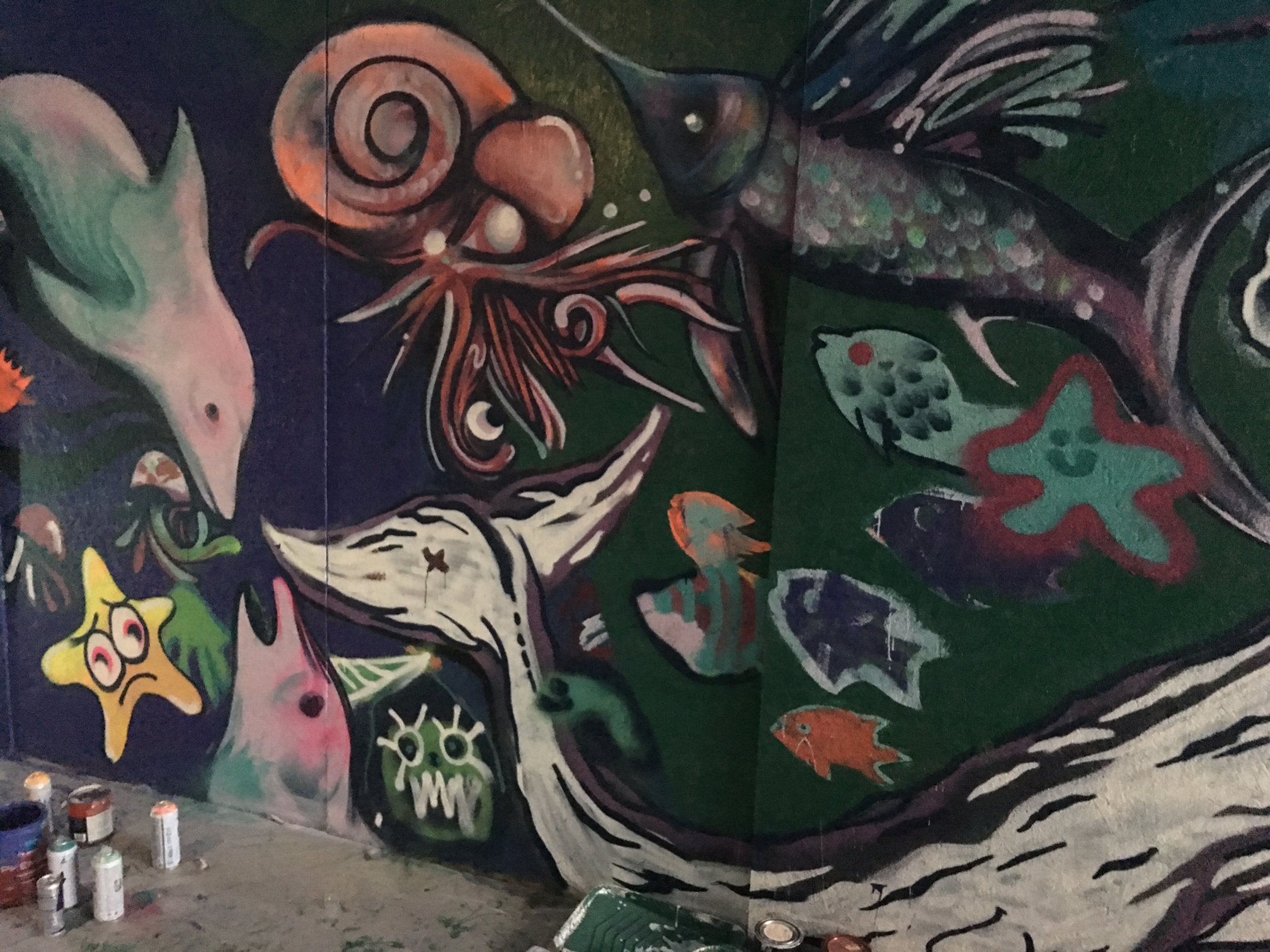 Walking past a multi-colored pyramid of glowing water bottles, I saw two other installations that seemed to be responding to their environment. The more impressive of the two was “Blumen Lumen”, where tall stalks of flowers seemed to raise their heads and open their white folds as people interacted with them. A nearby patch of small white flowers (that also glowed with different colors) seemed to light up as the sun went down. They looked a little strange and clumpy up close, like the sort of bathroom poofs you’d use in lieu of a sponge in the shower. 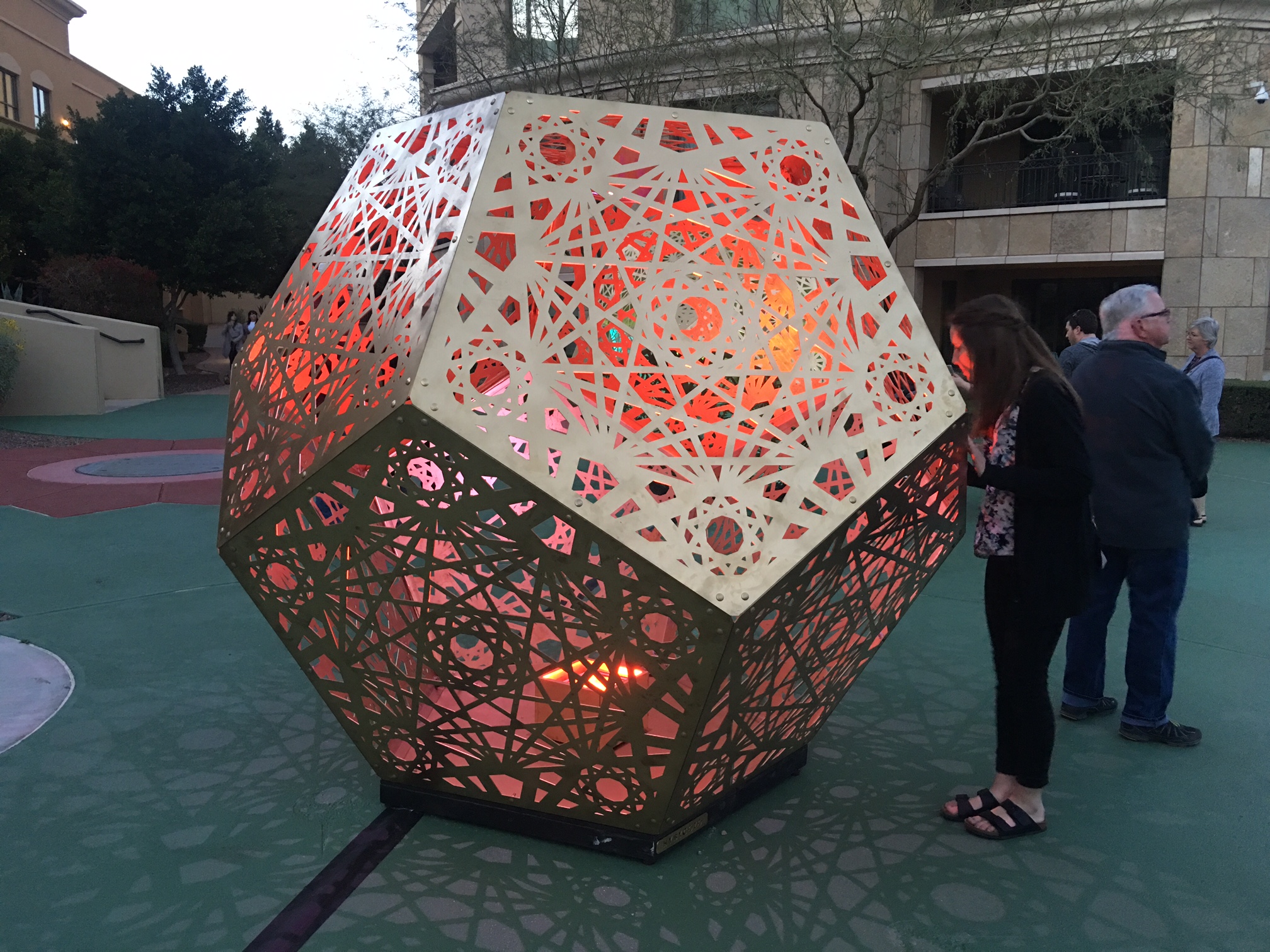 The last installation I looked at was the one Ball wrote about: HYBYCOZO. They were large colorful polyhedrons. Looking at them awakened the roleplayer in me: I wanted to roll them and shout a “I rolled a 20! CRITICAL SUCCESS!” They looked like they had been intricately constructed and their size dwarfed most of the spectators standing by them.

While most of the things I saw at the Convergence made for interesting eye candy, nothing seized my imagination as much as the helium creatures drifting overhead. They looked like something out of a dream and gave the event a fantastic atmosphere.

Seeing them circle overhead, I felt an acute sadness. I thought of Ball’s quotation of Keats’ headstone. Everything here was writ in water. It’s what I find so deeply appealing about installation artworks- they aren’t built to last. They are ephemeral experiences, things to see and touch and commit to memory, not the sort of things that get enshrined for all time in museums (Yayoi Kusama’s glorious “Fireflies” being the exception to the rule). I always feel more active and engaged as a viewer when I experience an installation, because I know that I won’t have the luxury of seeing it again. It gives whatever pleasures they bring a bittersweet aftertaste.

The thing that stayed with me as I left the Convergence, as I walked past hordes of 7pm drunks to get to my car, was the palpable joy I saw on the faces of the people there. The serious adults and elderly folks grinning like kids when they got on the musical seesaws, the clusters of Nordstrom bag carrying fashionistas pointing up with wonder at the flying “sperm whales”, the actual kids themselves who just thought all this art shit was cool (even if they had no idea what any of it meant). It took a part of town that’s as cold and dull and luxurious as King Midas’ hand and suffused it with wonder and warmth for four days.

Here’s hoping we have another one next year. Until then, I’ll have my memories of jellyfish, sky carp, and giant D20 to write on water.