A pair of cyclists blaze past us: one of them very young, the other an adult. We’re stand on opposite ends of the light rail station on Central & Roosevelt, cheering the bikers on. A bearded master of ceremonies, wielding two glowing orange rods, goads us into cheering louder for “our” rider. And as this goes on, a few people who don’t know what the fuck is going on wander by, waiting for their train to arrive.

For those of us arriving to catch the 8pm showing of Rising Youth Theatre’s Light Rail Plays, the bike race is the first act of the night; for the people cheering on the other side of the station, who just got off the rail coming down from McDowell, this is the last one. Eventually, one of the cyclists emerges victorious. The other one pedals close behind her, wearing a bicycle helmet covered with trash. 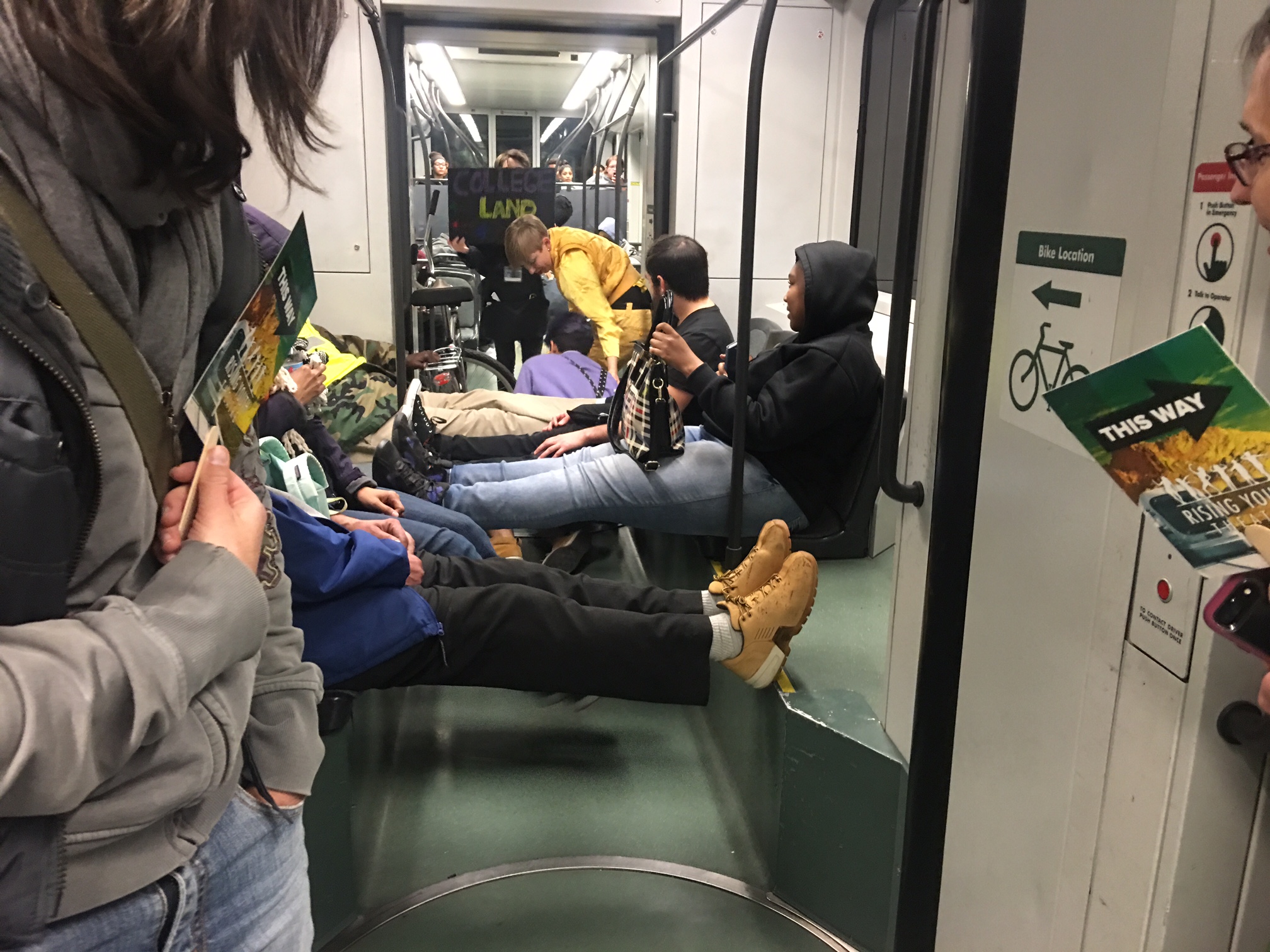 For the last few years, Rising Youth Theatre has put on this annual event. Pairing young actors & theater artists with adult creatives, they work together to create original theater pieces that can be performed on the light rail (and on nearby stations). The plays almost always begin on Roosevelt, continuing on the rail until the performers & audience disembarks on Central and Camelback; after a few performances at the Camelback station, the light rail players and spectators get on for a final trip back to Roosevelt. 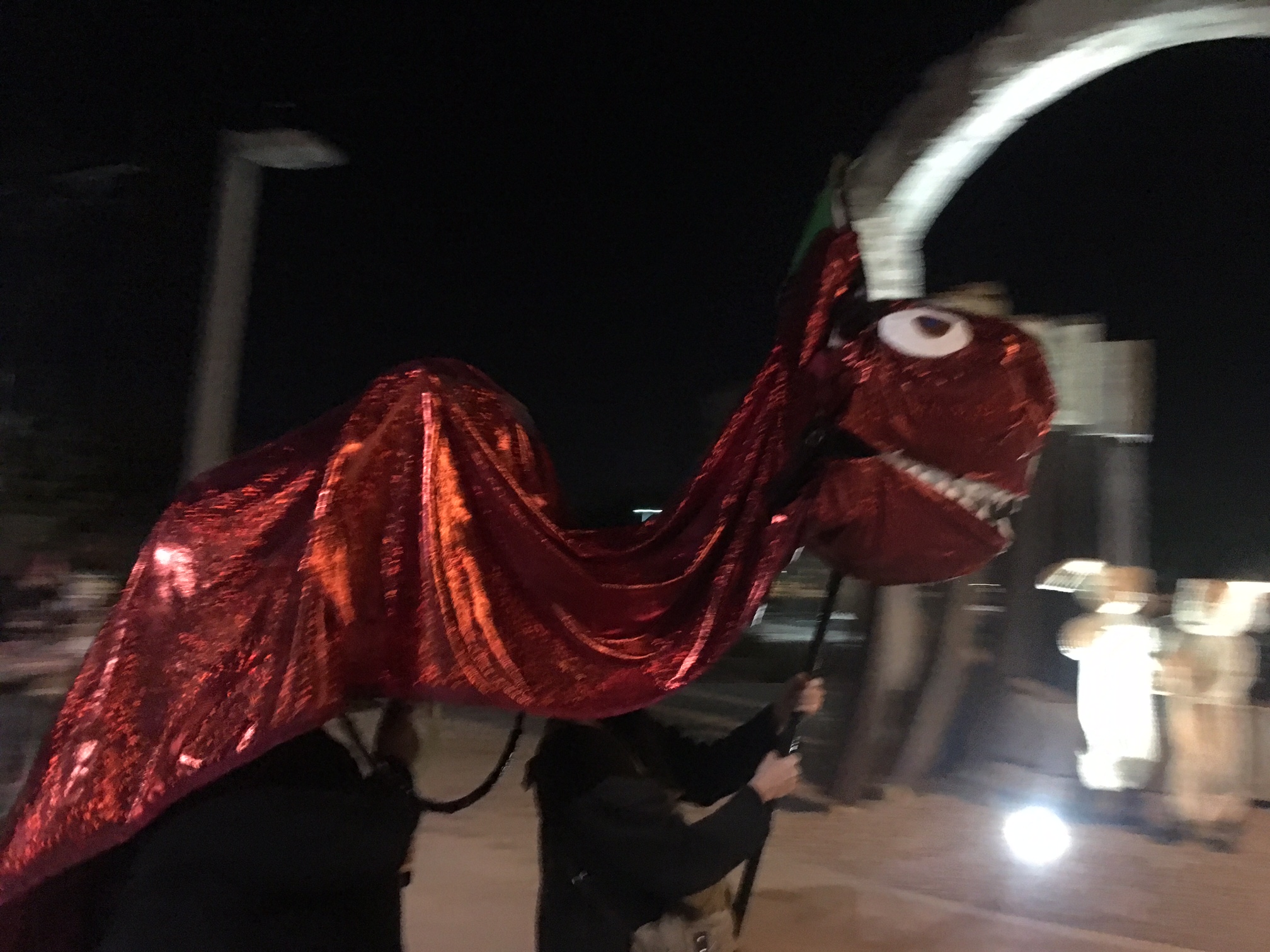 The first time I had seen the LRP, I was struck by the ingenuity of the pieces and how they took advantage of their constricted, public “stages”. It was also a treat watching the people on the light rail who had no idea what was going on: seeing sheer enthusiasm and irritation bloom in equal measures throughout the light rail car was a hoot. During the final act of that first LRP I had attended, it had even drawn down the wrath of a light rail security guard who apparently hadn’t been briefed about why there was a bunch of “weirdos” running around his station. 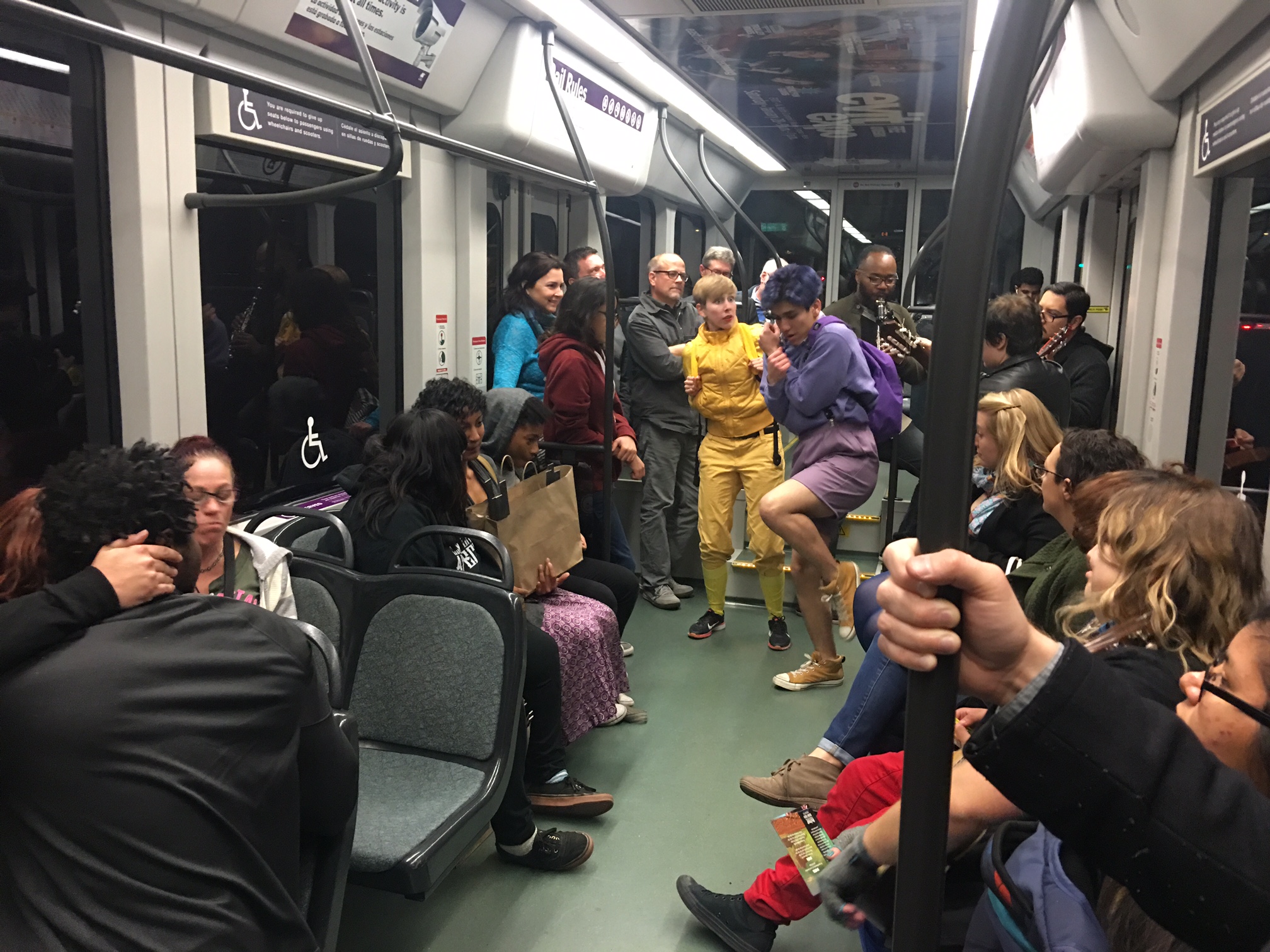 This year’s LRP was a tremendous amount of fun. Like past shows I’ve attended on the rail, most of the individual pieces aren’t dialogue heavy or massively profound in subject matter. But what they are is fun, sometimes hilarious, and often quite moving in the directness and simplicity of their messages. One of the refreshing things about seeing theater performances conceived by kids and teens is that they’re still unguarded and unpretentious about expressing themselves. More “mature” artists wouldn’t have the confidence to be so blunt with the messages in their work. That bluntness, for this kind of theater, is a good thing- it’s hard for subtlety to pay off when you’re crammed shoulder-to-shoulder on the light rail. 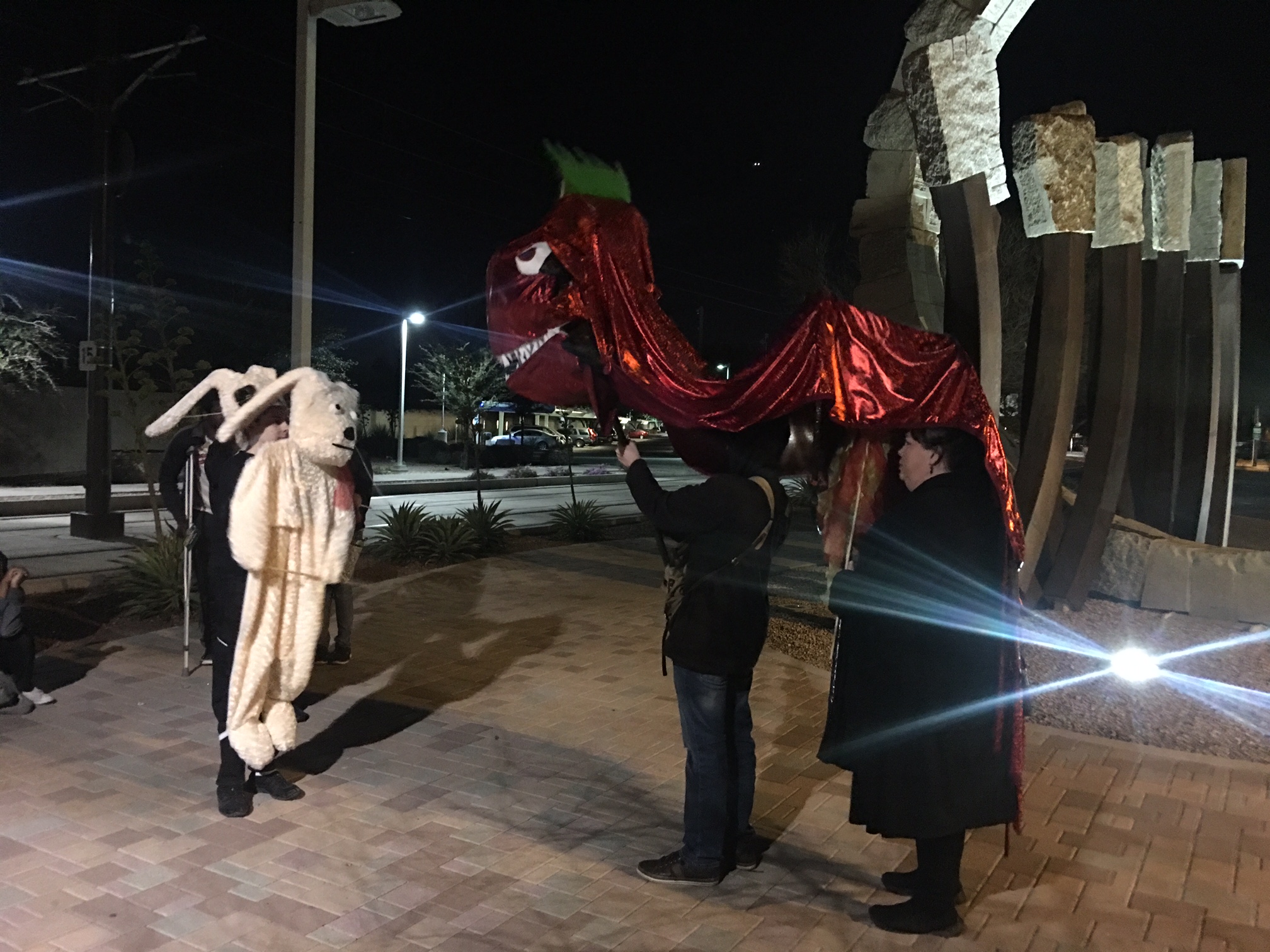 One of my favorite pieces was the first piece we saw on the light rail: ‘the game of life’. A live action platform video game, it featured two players (one dressed in yellow, one in purple) as they raced, hopped, and occasionally moved in slo-mo across the rail car to get to “College Land”. This was the piece whose blocking took full advantage of the playful potentials of the rail, as they maneuvered across it like an obstacle course. They even had to crawl through a “tunnel” at the end, crawling beneath a sea of legs propped up in the biker’s portion of the rail car.

While that first piece was going on, a passenger on the rail (who had no idea this was supposed to be happening) kept shouting “SHUT THE FRONT DOOR!” with surprised delight. She and her boyfriend would later follow our procession out of the light rail, putting whatever plans they had on hold to see how the rest of the show played out.

Another piece focused on being objectified and harassed on the light rail, as a pair of floating eyes pushed up against a young girl taking pictures of herself with a giant cardboard phone frame. The eyes kept saying “SMILE” over and over again until the girl snapped and delivered a spoken word piece. 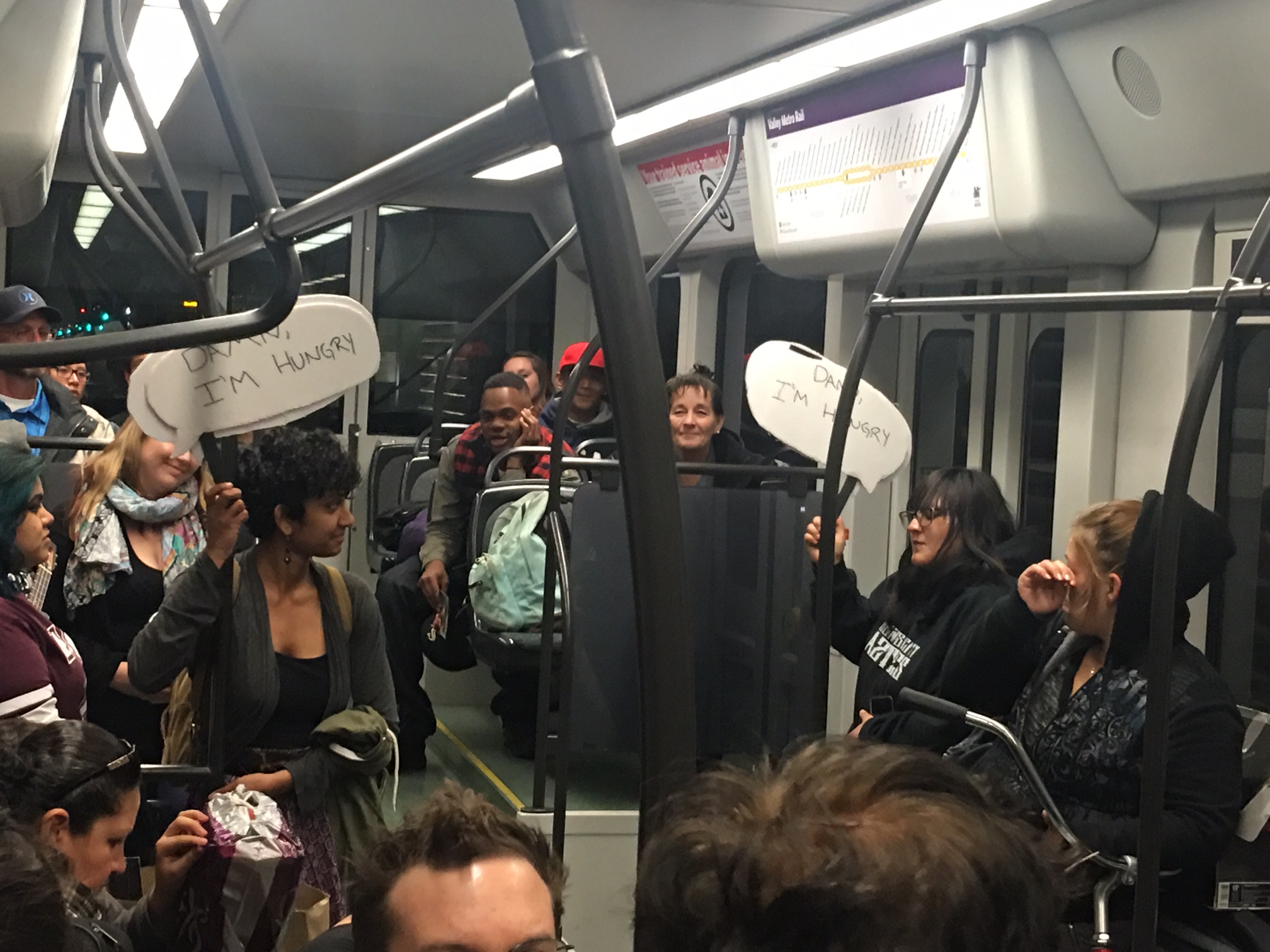 When we got to the Camelback station, we were led by our tour guides and the light rail band (composed of a clarinet, an acoustic guitar, a pair of ukulele players, and an electric guitarist with a lunchbox sized amp clipped to his belt) to the “Stargate” at the station. There, a pair of human-sized rabbits emerged and shyly approached the audience, getting close enough that we could pet their fur. And then a huge red dragon appeared, which also got close enough for us to interact with it. The huge puppets were impressive to behold, and the operators did a great job giving them expressive qualities.

As we waited for the return rail, we got to witness the most poignant piece of the night. A girl on crutches meets a legless woman on a cart (performance artist Crystal Cruz, from House of Cirque). The two of them befriend each other, share music through earbuds, and eventually literally lean on each other to get back on their feet. The girl helped Cruz use her crutches to get up on her “feet”: a pair of stilts! The climax of the piece wowed the crowd, when the girl climbed up on Cruz’s back for a piggyback stilt walk! The duo stilted off to our applause. Not only was it an impressive display of circus skills, it was also emotionally affecting: the two characters displayed a sincere rapport and connection without uttering a word of dialogue. 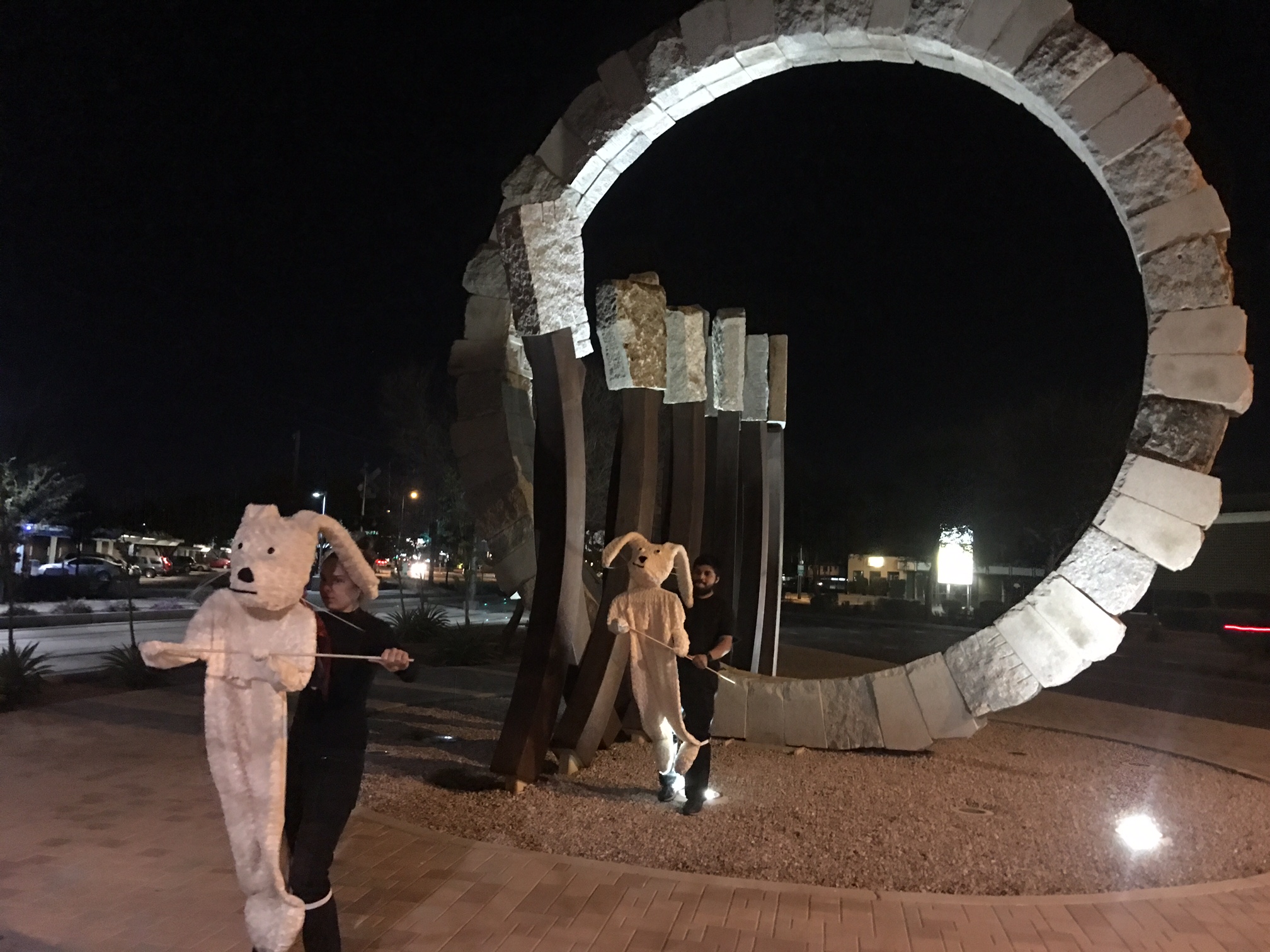 Not all the pieces were as effective. Before we embarked on our journey, we were led to a performance art piece held at the front of the Roosevelt station. In front of a projection screen, a pair of teens held a bolt of translucent cloth as recordings of their voices talking about the refugee crisis played overhead. While it was the most ambitious piece of the night, it was also the hardest to follow. My companions and I talked about it afterward and couldn’t figure out what it was trying to convey. 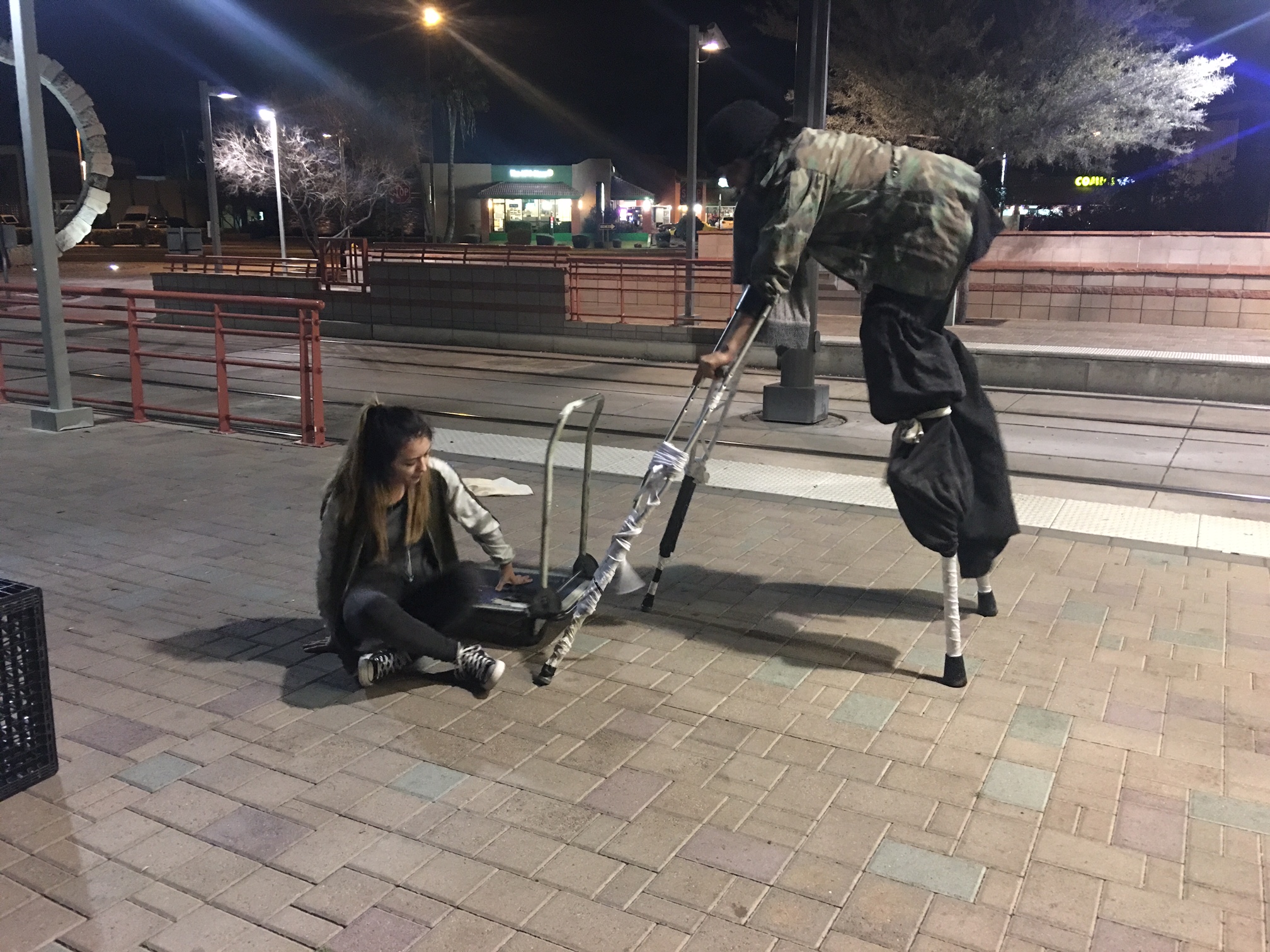 There was also a piece on the rail in which a teen danced and argued with a masked woman that was hard to follow. While it was fun to see them bicker and try to win the light rail crowd to their respective sides, I couldn’t make sense about what they were arguing about or what the point of it all was. Which made the ending, where the masked woman duct tapes the girl’s mouth shut and drags her “offstage” even more unnerving.

The final piece of the LRP featured a pair of young actors (one Hispanic, the other Indian), who stared at each other and communicated their anxieties and racist preconceptions about each other by fishing large word bubbles out of shopping bags.

Earlier in the evening, after the stilt performance, two of our Rising Youth tour guides led the audience through a uke-assisted singalong of “Cups” and “Can’t Help Falling In Love.” Those two group singalongs summed up the experience of the Light Rail Plays in a nutshell: it was a little corny, a little on-the-nose, and a tremendous amount of fun. It was also moving in a way a lot of theater wishes it could be: that feeling of forming an instant connection with a group of strangers because you’re all going through this crazy experience together. 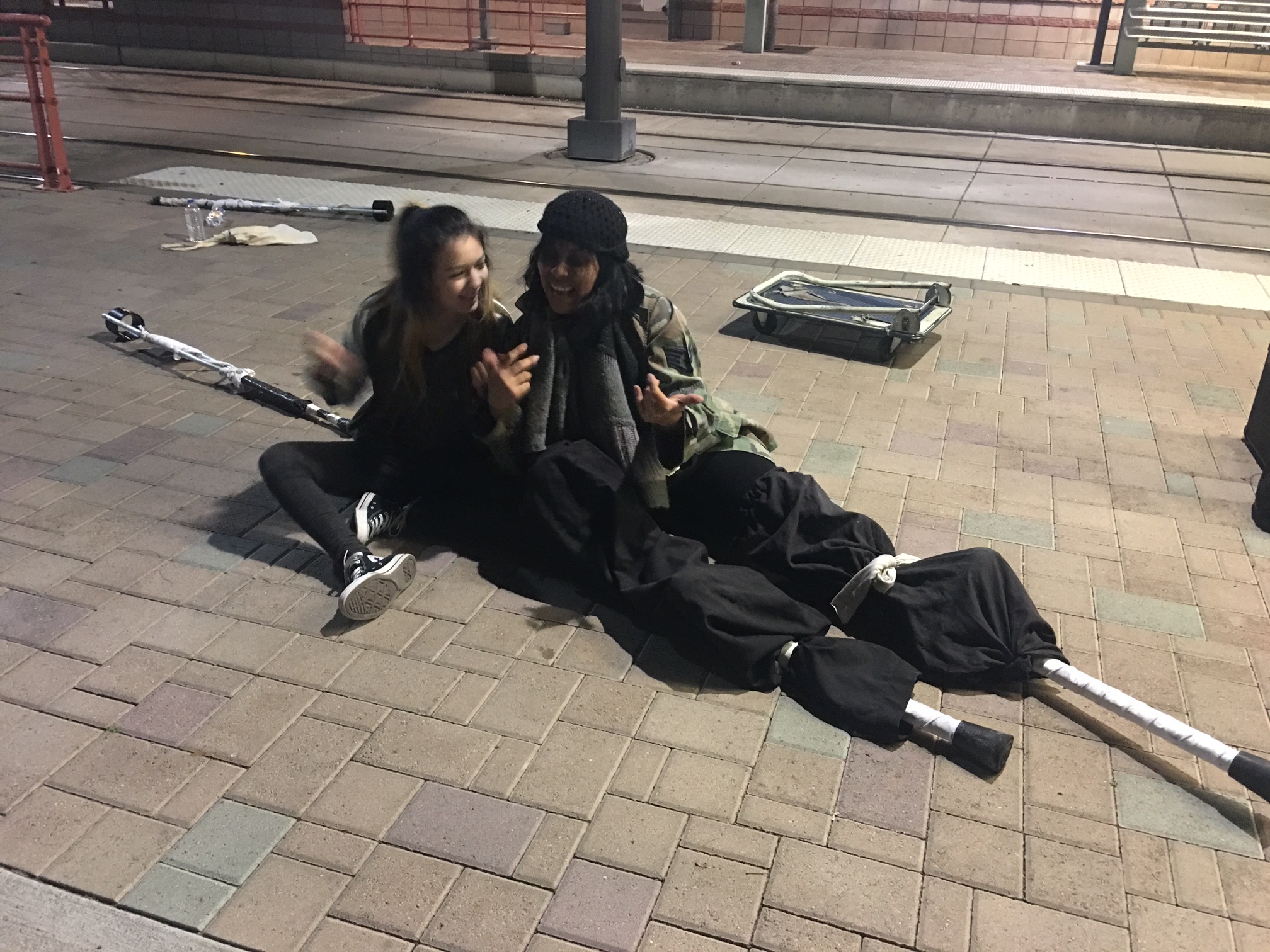 But there’s also this feeling of danger that comes with performing in public that gives the work in these short plays an added charge. No matter how innocuous the performance or subject matter was, there was always this feeling that everything could go off the rails at any second. Not knowing if the “civilians” watching the show with you could interrupt or kick up a fuss or literally stop you from doing what you need to do. The young theater artists putting this show together have to be commended for having the guts to take art out of its safe, protected bubble and putting it out on the street where it could get popped at any moment by a random prick. 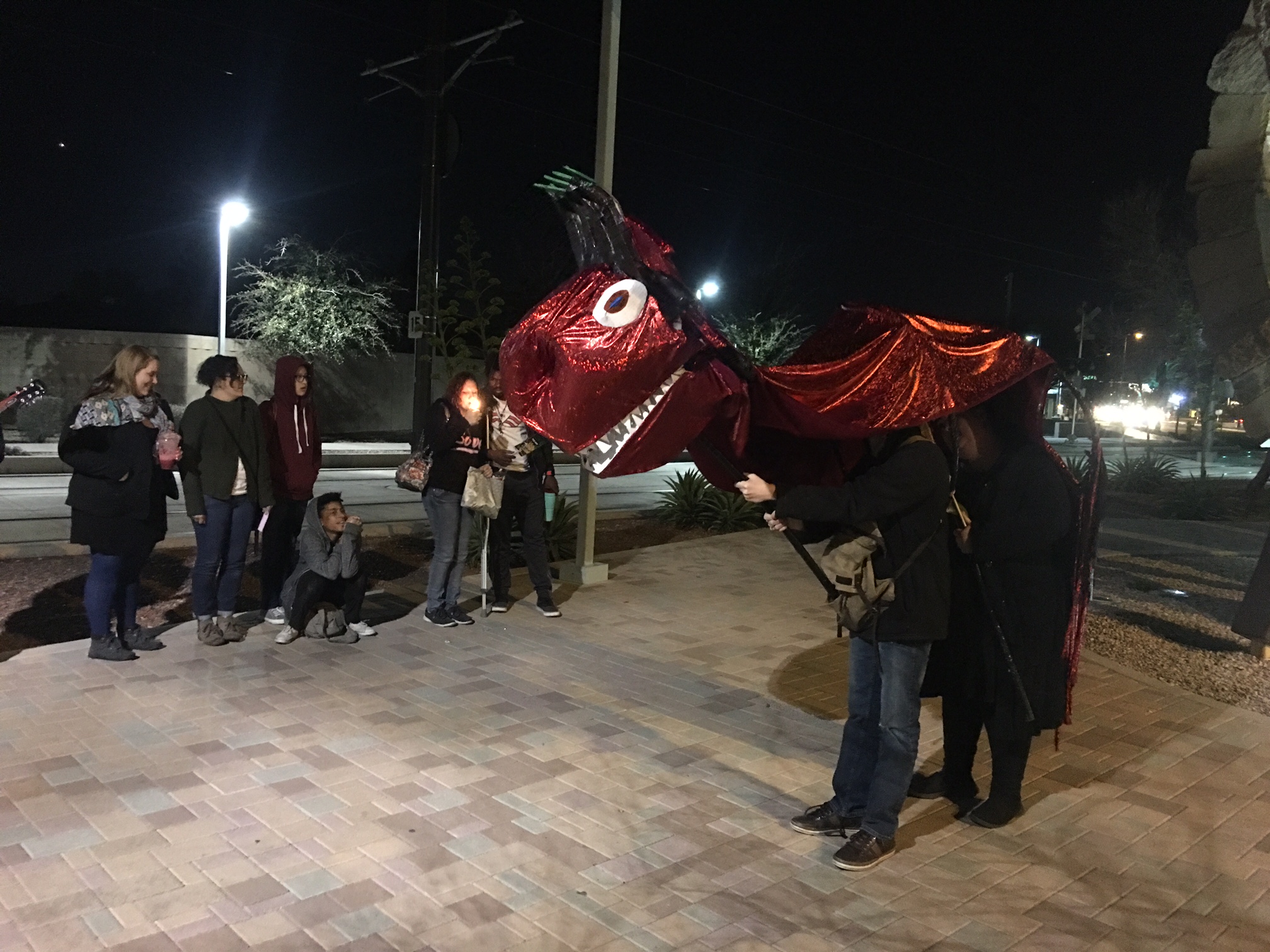 Imagine a world where you can step off mass transit and see a dragon, or get swept up in a singalong with a crowd of strangers. Last night, traveling with the Light Rail Plays, I got to have a taste of that world.

I’ll be honest: I wish we could all live in that world every single day. 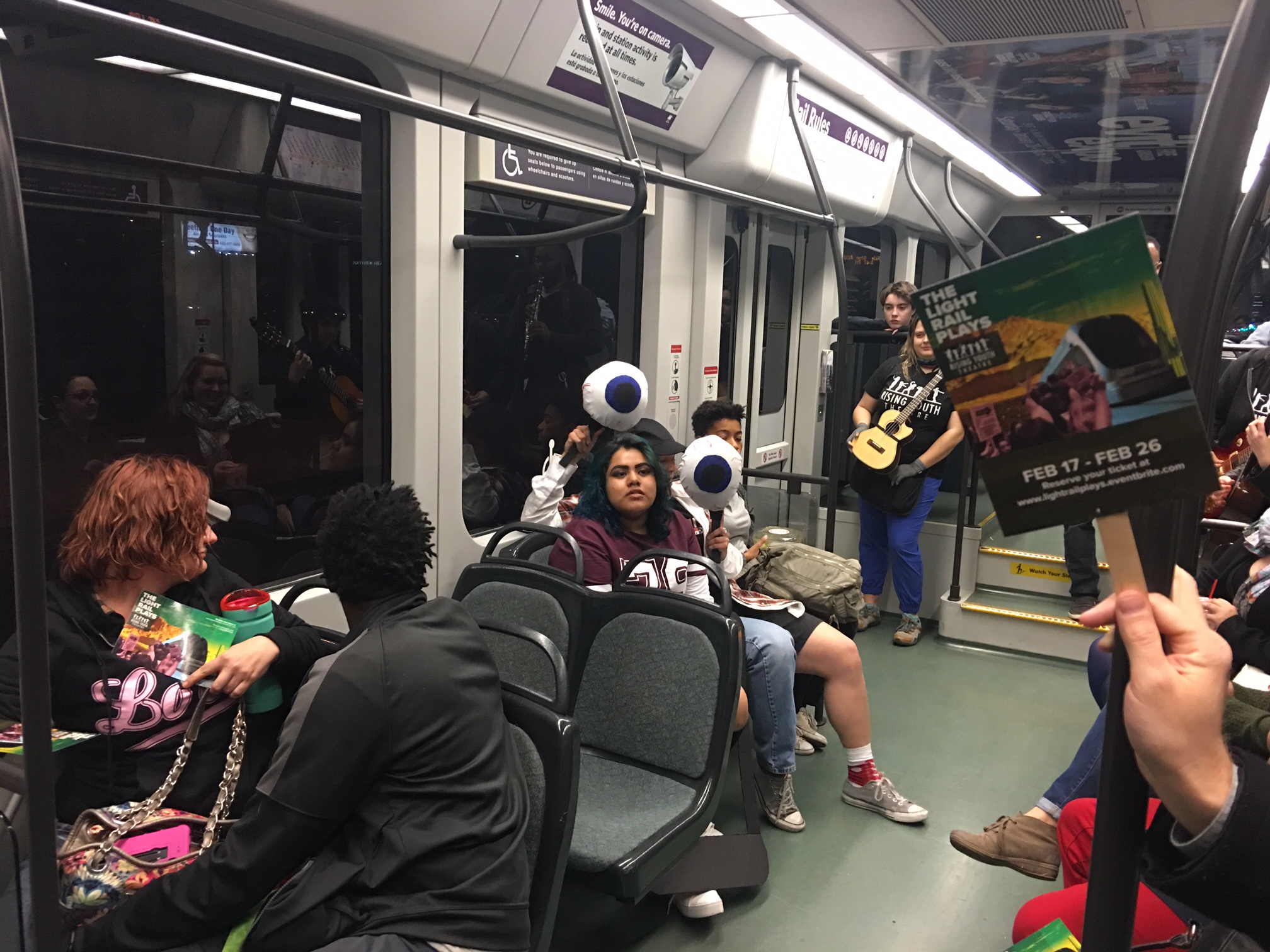