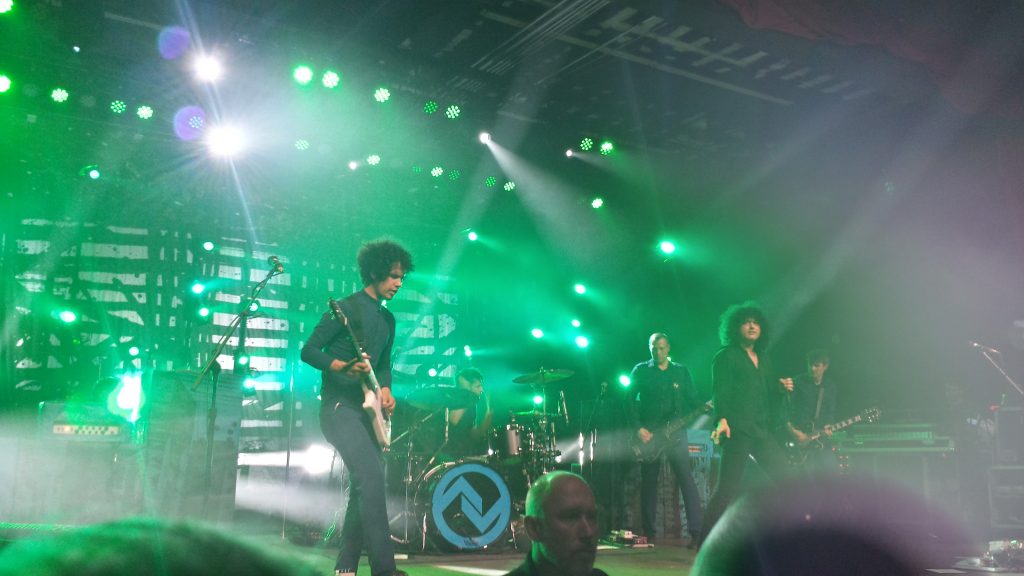 At The Drive-In at The Marquee in Tempe, AZ

Back in late October of 2000 I was going to bed with my television on (as usual) and Conan O’Brien’s show was still on NBC. I was in the midst of watching it and right before I was about to doze off he introduces At The Drive-In; a band who would perform the most animalistic, destructive, brash and visceral performance I had ever seen. The band’s music and the way they performed it was absolutely compelling and filled me with intensity and vigor. I fell asleep after the show went off, awoke the next morning and went to school like it was just another day but little did I know that band would change what I thought about music for the next 17 years.

It’s an unseasonably cold Monday night tonight in Tempe, AZ. The Marquee is packed with people, from all different walks of life, dressed in predominantly black clothing that could rival Jay-Z’s wardrobe circa 2009.

I arrived around 7:00pm and headed straight for the merch line. I was hoping they were selling some cassettes of their new album like I had saw on their website but they were not. As a matter of fact when I asked the guy if they had any for sale he replied, “No cassettes…and no VHS either.”

7:30 comes around and I start to wonder if I had arrived too early. The bill only had two performers and my ticket said the show ran until midnight. I thought back to the times I’d wait outside a venue 7 hours before doors just to meet people who’s music I liked and decided I was being a baby so I pretty much just sauntered around the venue listening to other people’s conversations for the next 45 minutes. 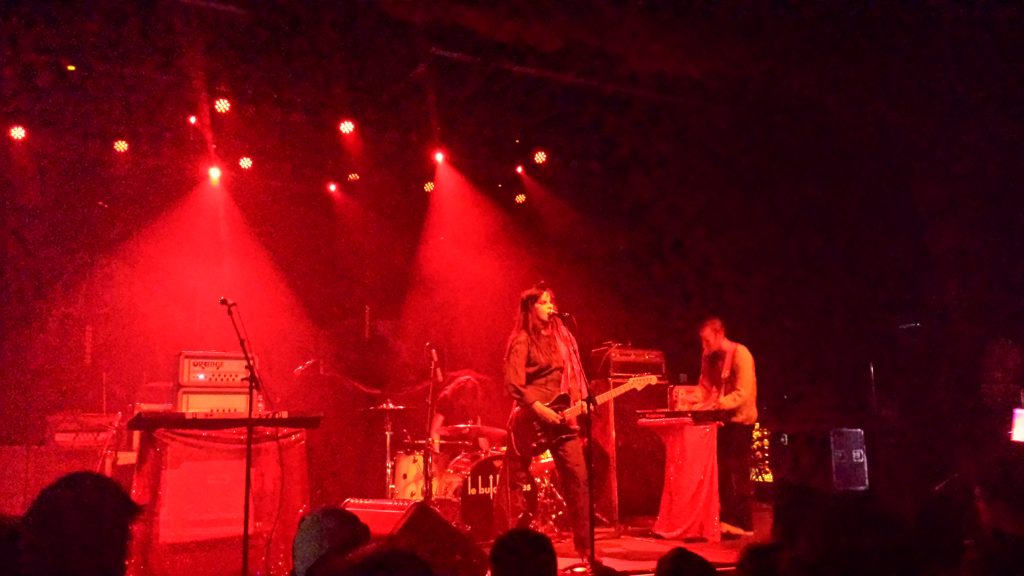 The lights drop and the crowd roars with acceptance! Le Butcherettes have arrived and they have the daunting task of warming up this pretty lethargic crowd. They start by kicking things off with “La Uva” and the crowd is immediately mesmerized. Le Butcherettes have a pretty haunting sound that makes you dance at the same time. This is especially true on songs like “Burn The Scab”, “Boulders Love Over Layers of Rock” and “The Leibniz Language.”

They did this really cool thing where at one point the house sound cut out and all you could hear was the raw amp of the guitar riffing alone then suddenly thrown back in the house accompanied by the rest of the band. It really created this level of dynamics I’d never seen done before. I recall looking over at this guy and we both nodded in agreement at how awesome that was. Their set ended with “Henry Don’t Got Love” and a bow from the band to the crowd, who were more than satisfied with their explosive set. 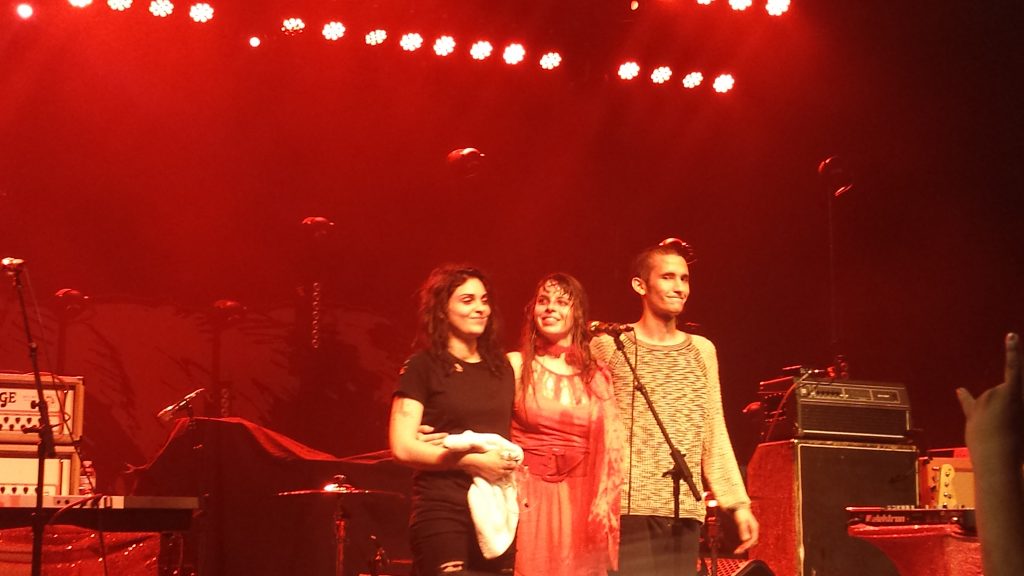 The lights rise and the roadies begin pulling things apart while other people began wheeling items off the stage. I’d say the stage setup was around 30 minutes in-between sets. I took a look back and noticed the room was 3 times as full than before Le Butcherettes arrived. I also realized I had been standing for about 3 hours at this point, but lucky for me I had years of practice from working all those shitty hours at checkout back when I worked for Best Buy. 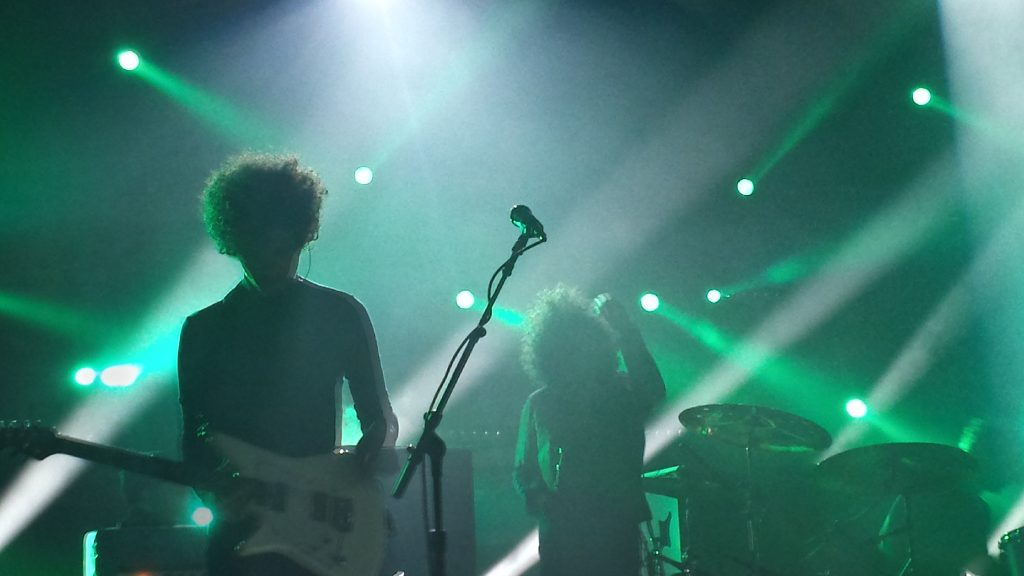 Omar & Cedric of At The Drive-In

The time had come for At The Drive-In! Lights drop once again and the stage is covered in blue. Paul, Tony and Keeley hit the stage and head for their instruments. A few seconds pass and Cedric and Omar saunter across the stage together as if they’d just left a bar. Seeing Cedric hanging over the shoulder of Omar evoked a camaraderie that only two friends who’d been through hell and back together for 20+ years could possess.

Things ignite right out the gate with “Arcarsenal” from the band’s 2000 album “Relationship of Command”. Around this time I also noticed that Tony and Paul have some grey in their hair now but their connection as a superb rhythm section hasn’t aged a day. While Omar spends most his time twisting around unconventional scales and pedal tones (as he should) Tony literally never misses a beat. Things roll into “No Wolf Like The Present” off the band’s new album “In•ter a•li•a” and it’s one high energy song after another. Things eventually slow down when the band plays “Ghost-Tape No.9”. The band cuts through a few more instantly recognizable songs before leaving the stage for a very brief intermission. 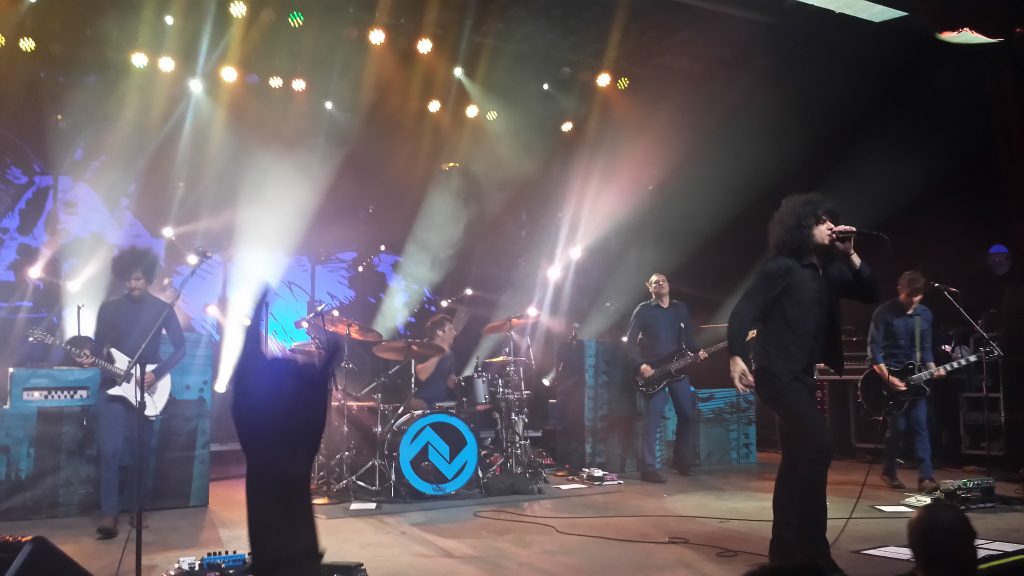 Once back on stage the guys break into their third release from the new album titled “Hostage Stamps” which throws the audience back into a frenzy. A girl leans over to me and asks me to lift her up so she could crowd surf. I obliged and off she went. Once the song is over Cedric begins to address why the band took so long to make it to Arizona. He said they had a plan, within a plan, that housed a wrapped Tootsie Roll that was the new album, and only once it was done would they return. He ultimately thanked everyone for coming to the show and the band ended their set with the oh so popular “One Armed Scissor”.

After the show was over I hit the merch table again to get the new album. It was $20 and I only had $16 on me but the merch guy was cool and let me get a copy for the low! I walked right outside the front entrance into the cold night air, across the bridge, and back into Tempe with my discounted CD, fulfilling the admiration of my inner child once again.