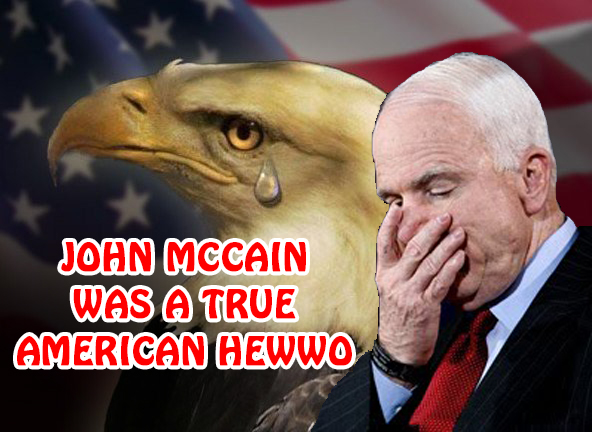 Hey kids! We wrote a fun little quiz that may help us settle this debate—is John McCain a ‘hero?’ If you cannot answer YES to all of the following questions, it is my belief that your moral compass is severely out of whack and you should seek professional help or read a goddamn book.

A) Was the Invasion of Iraq a colossal mistake? Y/N
B) Was the Invasion predicated on lies, misinformation and propaganda? Y/N
C) Did the Invasion kill at least 100,000 civilians, and as many as 1.1 million, the majority children? Y/N
D) Did the Invasion burn through a massive pile of taxpayer dollars that could have been better spent on literally anything (healthcare, education, infrastructure)? Y/N
E) Did the Invasion lead to more war? Y/N
F) After fifteen years of meddling in Iraq, do we have nothing to show for it? Y/N

So should we show ‘respect’ for an American ‘hero’ like John McCain who:
A) Said anthrax was coming from Iraq when it wasn’t. Y/N
B) Voted to invade Iraq. Y/N
C) Gleefully supported a surge of more troops in 2007. Y/N
D) Voted against deployment limits. Y/N
E) When asked how long to stay in Iraq, his idea was to ‘Make it a hundred‘ years. Y/N

Would you call anyone who supported the above an ‘American hero?’ If so, what the fuck is wrong with you?

The War on Terror was and is completely antithetical to any American domestic interests. In other words, it’s done little more than make this nation more unsafe, more broke, to say nothing of the vast cost of human lives. We could get into all the other shitty things that McCain stood for—not least of which is his record of towing the line for Trump (83 percent), despite all the rhetoric otherwise—but Johnny’s support for the war in Iraq is more than sufficient.

Now, it is true that in McCain’s ghostwritten book that he admitted invading Iraq was a mistake. He said this:

‘The principal reason for invading Iraq, that Saddam had WMD, was wrong. The war, with its cost in lives and treasure and security, can’t be judged as anything other than a mistake, a very serious one, and I have to accept my share of the blame for it.’

But if you read further, he says shouldn’t have ‘used the occasion to cheer for the prospect of war. All wars are awful.’ Whoa, that’s weird, cuz there was that time not too long ago that he sang ‘Bomb bomb bomb Iran’ to the tune of a Beach Boys song. Sure seems like this ‘hero’ didn’t learn his lesson about applauding death from above. And don’t forget McCain’s unending support for Saudi Arabia’s genocide of Yemen.

Of course, no one is saying Saddam Hussein was some kind of angel. But it’s kinda silly when American intervention was way worse than living under a dictator. It’s a little known fact that Iraqi citizens did resist being invaded by America, but in April 2003, the U.S. Military opened fire into a crowd of protestors, killing 20 and injuring more than 70.

McCain voted against an effort 6 months ago to end the Saudi slaughter of Yemen—a siege thats killed 15K+ and created a million cases of cholera. He routinely backs the war & selling of arms to the Saudis. Now he’s a champion against genocide? What universe do you people live in? https://t.co/8KlSIkmfu0

Finally, McCain writes in his book that invading Iraq was still a ‘just cause.’ Bullshit. Abu Ghraib prison was not just. The extrajudicial killings of journalists was not just. The numerous wedding massacres were not just.

What a shitty apology. If you burn down someone’s house, shouldn’t you do more than say, ‘Oops?’ Yet, he continually pledged for more money to the military-industrial complex and if there wasn’t already enough proof, the latest $716 billion dollar military spending bill is named after McCain. 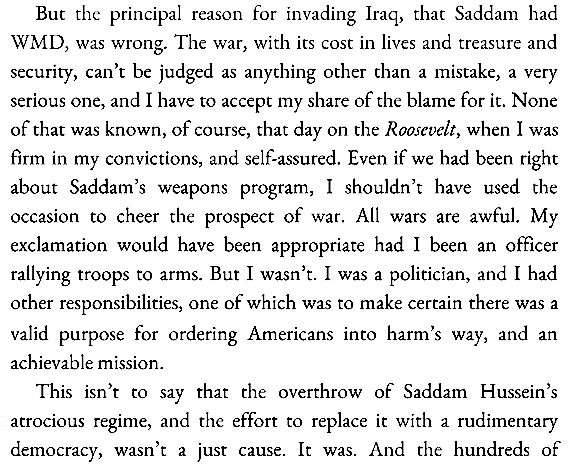 Full excerpt of the book.

McCain wasn’t all bad. But his undying support for war makes him an asshole, not a hero. This isn’t complicated.

So maybe our definition of a ‘true maverick patriot’ is a little different. Because we think it’s smarter to avoid useless wars that last longer than the occupation of Vietnam, kill hundreds of thousands of people, and help bankrupt the country. How the fuck did the opposite of that become conflated with patriotism?

Tags: dropping bombs is not patriotism, fuck republicans, fuck war, john mccain, john mccain sucks, maverick, phx sux, sarah palin was a breeze compared to iraq, war heroes, war in iraq
Previous postPatrician Pop-Punk Plays on the Politically Correct in 'Love is Like A Stabbing Pain' by Andy Warpigs Next postHalloween Never Has To End With Cult of the Yellow Sign