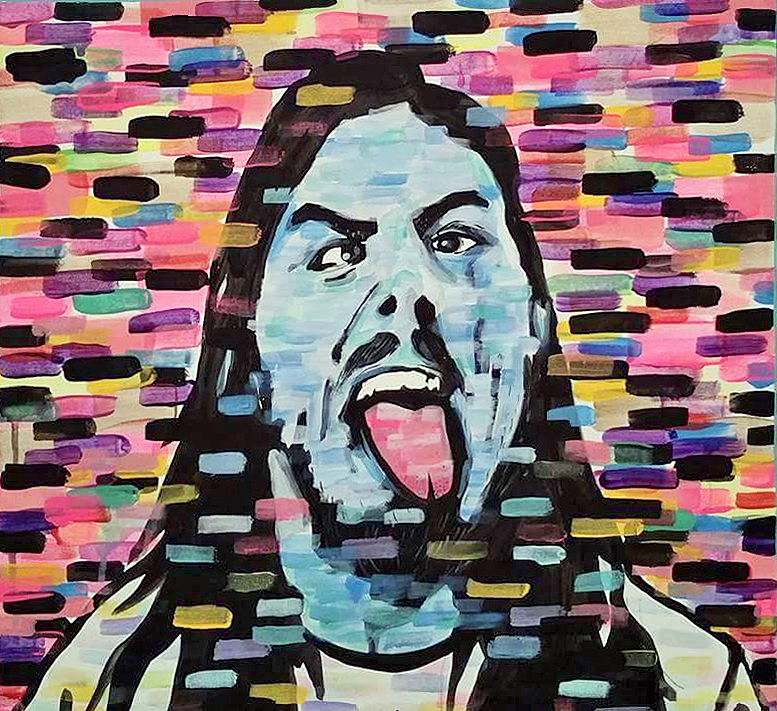 “When you party into the abyss, the abyss parties into you.” – Andrew W.K.  ||  Painting by Joe Gonzalez.

When I arrived at the corner of 4th Avenue and Monroe on Monday night, I had little idea of what to expect from the one called Andrew W.K. A friend had offered up his ticket for the Phoenix edition of  the “Power of Partying”, and like the unscrupulous esotericist I am, I snatched it impulsively on the grounds that the lecture was being held at the Phoenix Masonic Temple. And so I found myself walking up the steps, carrying with me only the vaguest understanding that this man, besides being a musician, was an advocate of ‘partying’.

After passing through the small lobby, one of the security staff steered me towards the teetering stacks of Grand Avenue Pizza boxes on my right. I will not disclose how many slices I ate. The large auditorium space, monotonous with brown, cream, and false wood panels, was only disrupted by the colors adorning the podium; a banner of satin emblazoned with Andy’s unmistakable likeness, punctuated by his signature crimson nosebleed. The room was occupied by a modest gathering of people whom my anxious herding instincts safely assured me were “my kind”: Millennials of the ‘alternative’ variety, wherein the acceptable attire is any combination of black, plaid, or beard.

I did, however, maintain some mild apprehension due to the looming question as to how these people collectively defined ‘partying’. Is it the sort of thing that I loathed as an undergraduate student, involving undue vomit and noise? Is this a cult of hedonism, and have I just walked into an extremely low-key Bacchanalia? I found few clues among the mellow crowd, aside from their various modes of showing their admiration for this character. One guy sitting towards the front of the room wore a white shirt with a large ‘blood’ stain down the front: a stigmata cosplay of the rock prophet’s own wound. 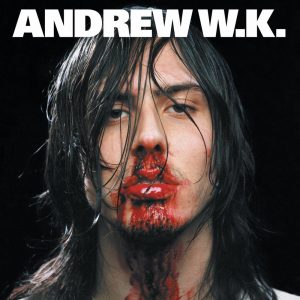 Promptly on the hour, the lights dimmed, and the audience cheered as a man pushed through the illuminated center of the curtains and up to the podium. Even with his signature scruffy-yet-hunky appearance –jeans, white t-shirt, and long wild hair— Andrew immediately established a powerful presence on the stage. The self-proclaimed “humble servant of the party gods” addressed the crowd with a rambling dialog, modest and self-aware yet still bearing the virtuously authoritative quality of a man who spoke for a greater cause. This event being his first lecture in Phoenix, he began by exploring the symbolism of the mythical bird, and the generative power of fire. He referred to human passion as flame, and called for the collective harnessing of destructive inner forces to be used as positive, creative energy. Or something like that. The applause from the crowd was immense. I was bewildered as to what any of this had to do with ‘partying’.

How ironic is this intended to be? I wondered, feeling the usual skepticism creep up from my depths to strangle any budding feelings of empathy. I did, however, identify with Andrew as he went on about struggling with self-doubt, and the pains that one takes towards realizing oneself. There was a lot of idealist positivism coming from a man who had spent just as much time confessing his inner demons. Please understand my uncertainty was not born out of condemnation or disbelief, but from the shock of the sudden and unexpected confrontation with a sincere human being.

The definition of Partying, and what it means to Party according to Andrew W.K.,was revealed by his response to a common existential struggle: to be alive is phenomenally overwhelming, and the very awareness of this has crushing effects. Yet we as living creatures are rare in the universe, and therefore valuable for our ability to experience life. He resolved, therefore, that “of all the ways to look at [the fact that we exist], we might as well consider it a good thing.” To Party is to be celebratory of struggle, and to experience life’s trials as a “gleeful wave of experience.” 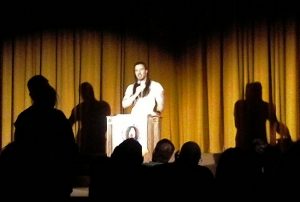 Andy answers questions from the audience.

The bulk of his narrative lecture dug into cosmic paradoxes and cycles of delusion and truth, all the while loosely weaving the thread of his definition of Partying throughout. His description of seeking advice from one’s ‘inner wizard’ (essentially the Freudian Superego, as I understood it) was as humorous as it was poignant. Though one might associate such talk with ‘woo-woo’ new-age spirituality and conversations held by stargazing stoners, he maintained a staunchly secular, intellectual stance. Science held equal footing with virtue throughout his talk, even when asked by an audience member about his thoughts on religion. The open-mic Q&A section of the lecture, which was actually more like brief one-on-one conversations with Andy, brought up subjects ranging from thought-provoking theoretical queries to personal advice and teary-eyed gratitude. A great number of audience members had described seeing him at previous events and the positive impression that it had on them. It seemed obvious that he had become a cult icon not solely because of his audacious stage persona, but because of his willingness to be open and vulnerable with his fans.

Andrew W.K.’s talk was overall a therapeutic experience. To admit to his own confusion in a room full of equally confused humans is a brave and noble task. There is an immense need for people to be able to talk about self-destructive emotions and doubt not as brokenness or illness, but as a powerful and perfectly valid aspect of the self that must be nurtured and redirected into a positive creative force. We are all hungry for advice and consolation from some wise and worldly wizard, and Andrew reminds us that like Oz, he needn’t exist, for we are perfectly capable of finding that wisdom within ourselves. There is no ultimate truth that can be attained; there is only the individual on an endless, impossible quest to find their own self.

And that, I have learned, counts as Partying.