Music / Shows We Done Gonna Do 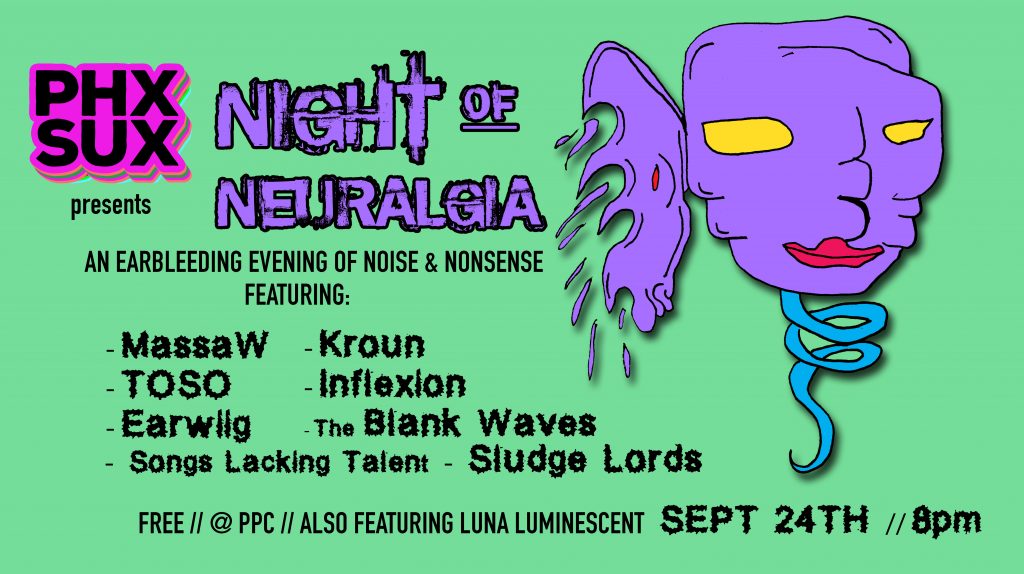 PHX SUX presents Night of Neuralgia, an earbleeding evening of noise & nonsense. This event is an experiment in experimental music, with the crowd helping to provide the direction. The show is hosted by PPC (contact the PHXSUX page on Facebook for the address after you mark going and share the event.)

The music presented isn’t designed to be sadistic (well not all the time), I could draw parallels to jazz but I think a definition helps:

neuralgia [n(y)o͝oˈraljə]
noun
intense, typically intermittent pain along the course of a nerve, esp. in the head or face.

It’s about the transition from the beautiful to the edge of chaos in short bursts and back again. I’ve asked the artists to try to be to transition between more drone and noise of various intensity depending on how the crowd is feeling it, because I really don’t know.

I booked this lineup, let me share what I’m trying to do. I’ve got four artists here that do more the traditional band thing but on the experimental end but are fundamentally song oriented. Then I’ve got four other electronic artists that pay some lip service to song structure but are fundamentally experimental audio texture scientists. After seeing and Swans this past week on consecutive nights, I’m completely confident this will be a uniquely wonderful show.

I was greatly inspired by Igloo Martian’s Indie 500 performance at Trunk Space and how well received it was. We’re not going full-igloo here (I think that should be a turn of phrase) but I’m pointing a compass firmly in his direction. Baby steps. I know there’s a lot of people in the scene that would be very interested in having more noise and drone music in local event lineups, both artists who contact me (since I now seem to be the local point-of-contact for experimental electronic of this nature somehow) and audience members who approach me after Militia Joan Hart shows.

I’m very excited about this evening and prospects for the future. I can’t wait to present this lineup to everybody. This has been in the making since May.