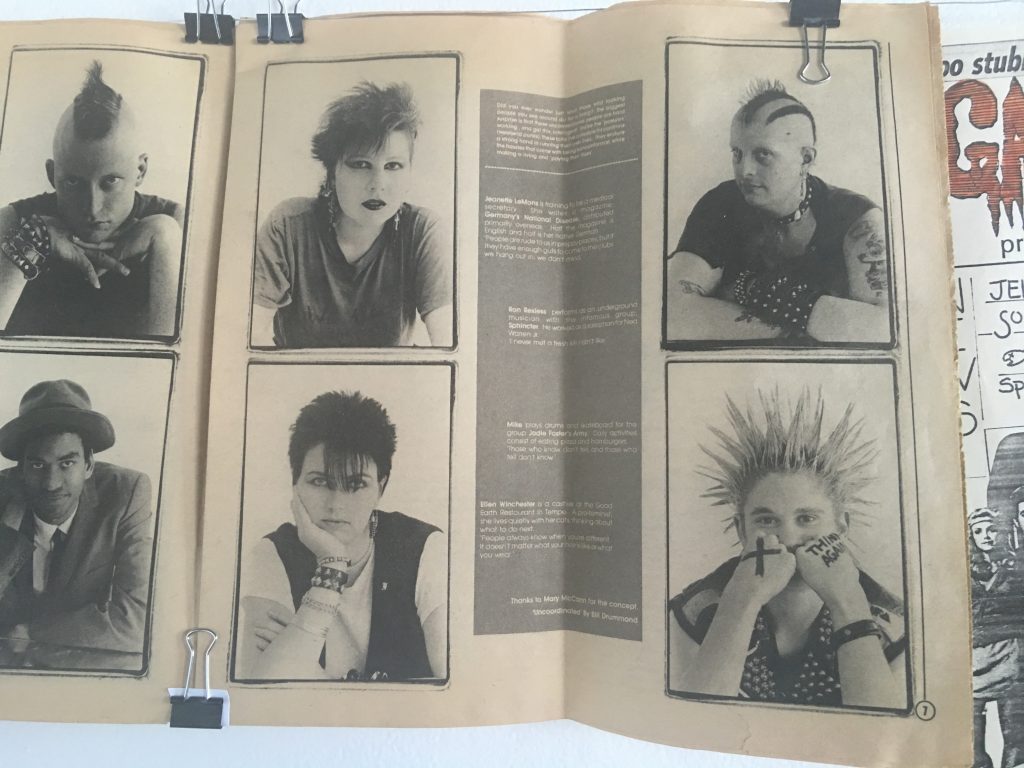 A mannequin as black as polished obsidian is wearing a kinky nurse’s outfit. Old show fliers in plastic sleeves are suspended on clotheslines. Wrinkly JFA and Mighty Sphincter shirts hang on nails, hovering over white space; Around the corner from them vinyl albums by Killer Pussy, Billy Clone and the Same, Sun City Girls, the Meat Puppets, and other Arizona luminaries fill up an entire wall. Fliers, photographs, zines, shirts, records, and buttons: The fossils of an ancient subculture, chiseled out from private collections and thrift stores, re-assembled and mounted for our viewing pleasure. 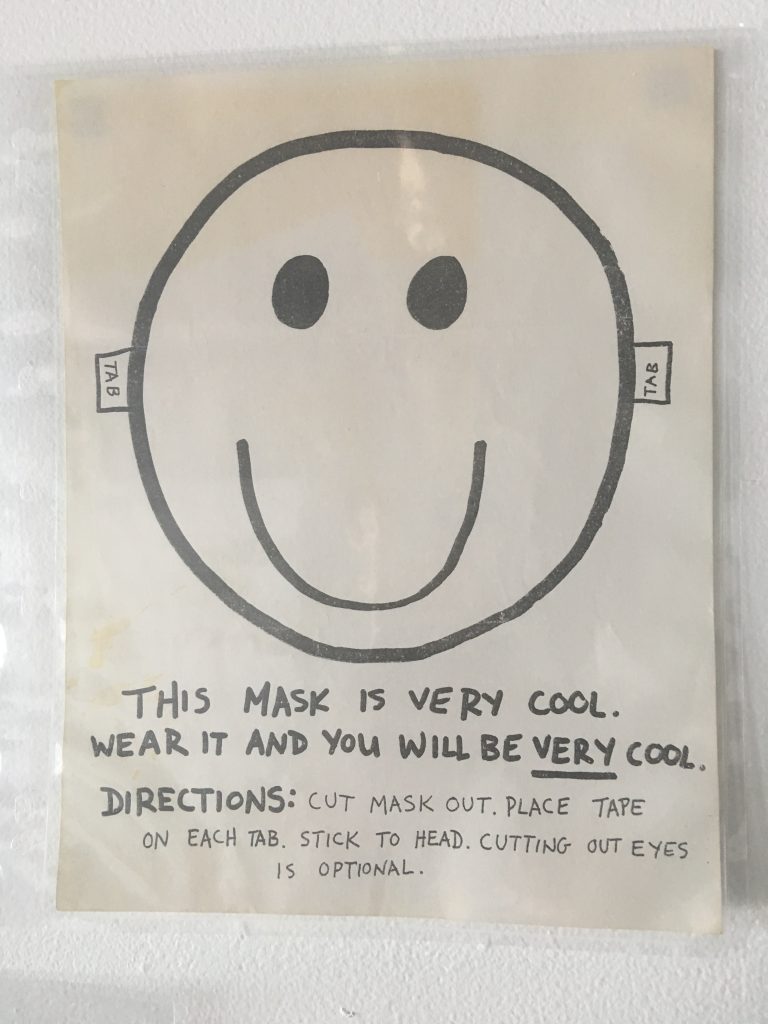 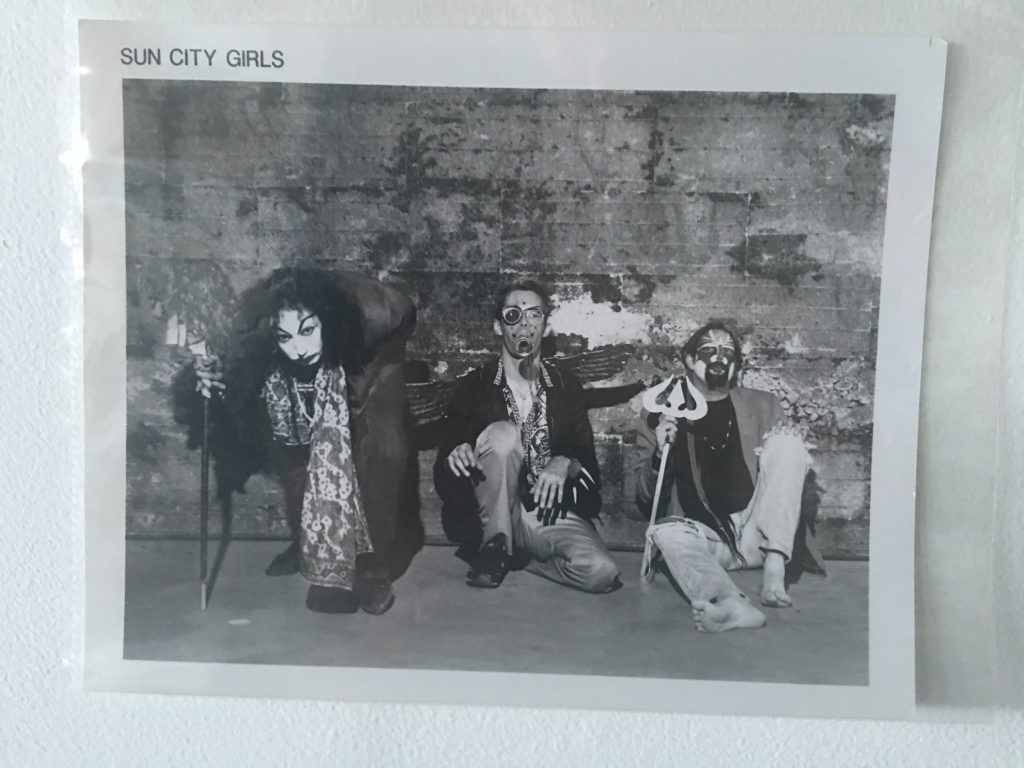 Ancient is a bit of an exaggeration: The ephemera and artifacts gathered together for “You Weren’t There: Early Punk & New Wave in Phoenix” at Modified Arts chronicles the underground scene in Phoenix from the late 70’s through 1985. It’s not that long ago, but in subcultural terms 30+ years can feel as remote and distant as the Roman Empire if you weren’t around to experience it. An old show poster for a Feederz/Black Flag gig may as well as be a sketch of the Colossus of Rhodes to me: I’ll never get to stand in the shadow of either of them. 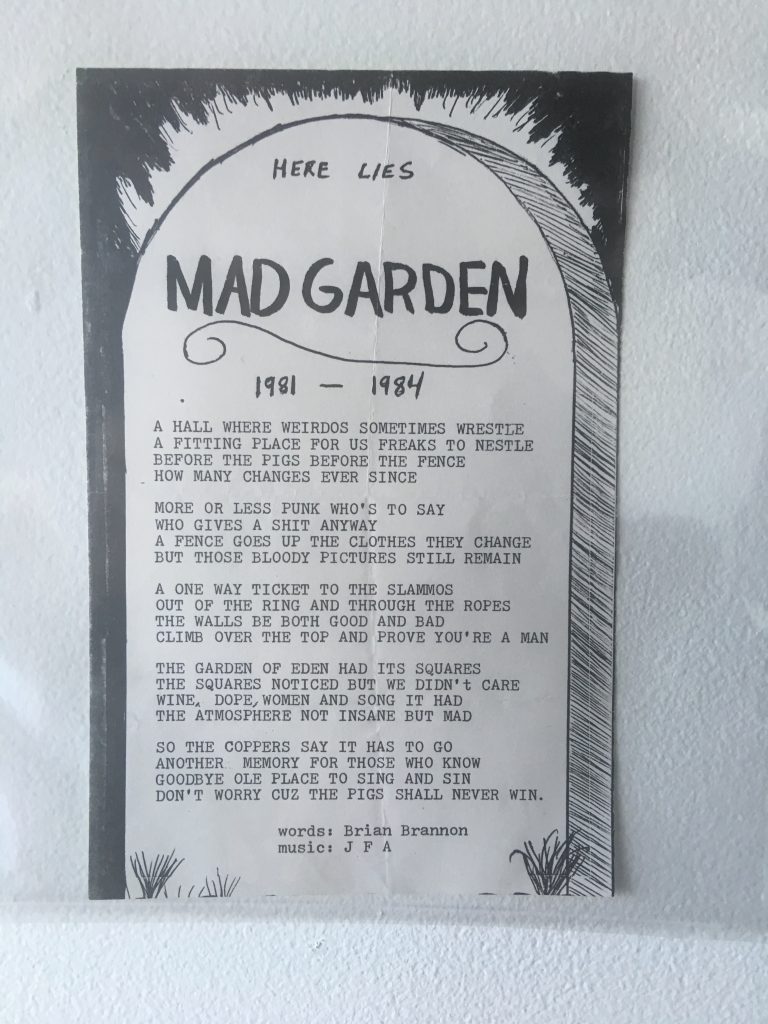 The collection on display is fascinating and expansive. The walls are covered with show fliers and posters, many of them in startling good condition considering their age. The names of venues swept up into the dustbins of history pop out: Mad Garden, Salty Dog, Devil House, Vivian’s. Legendary local acts are listed on the Xeroxed lineups next to bands who’ve vanished from collective memory as completely as a drawing on a shook Etch A Sketch.

What’s even more surprising is seeing all the great national acts that have passed through Phoenix in the past: Gun Club, Saccharine Trust, The Minutemen, Husker Du… Even Snakefinger, who I was convinced was just a joke character from the Ralph Records backstory, not someone who actually made albums and toured cities like Phoenix. 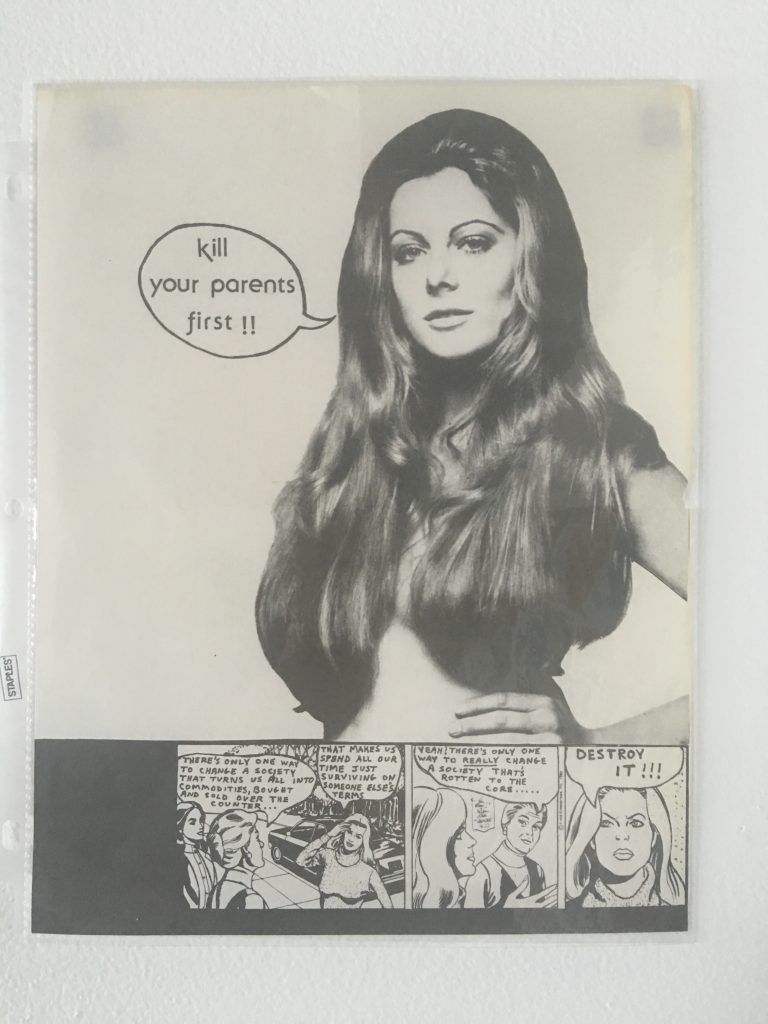 I’ve visited “You Weren’t There” twice so far, and the one thing that leaped out at me both times I was there was the lack of context. Aside from a statement explaining the exhibition at the entrance, there’s no identifying signage or any information posted about what we’re looking at. Who designed these fliers? Where did they come from exactly? Why these bands, and why not other bands? Who are the people in all these photographs strung up on lines by the entrance?

In any other kind of exhibition, the lack of information would be a problem. But the lack of any kind of explanation for what we see at “You Weren’t There” MAKES the exhibition and gives it a certain power that detailed scholarship and statements would kill. For people who’ve LIVED through this scene, no explanation is necessary. It’d be like flipping through your high school yearbook: No context is necessary. But for those of us who weren’t there (I’m 33 years old, so I was busy learning how to walk and use the toilet while most of these shows were happening), “You Weren’t There” is a beguiling mystery. 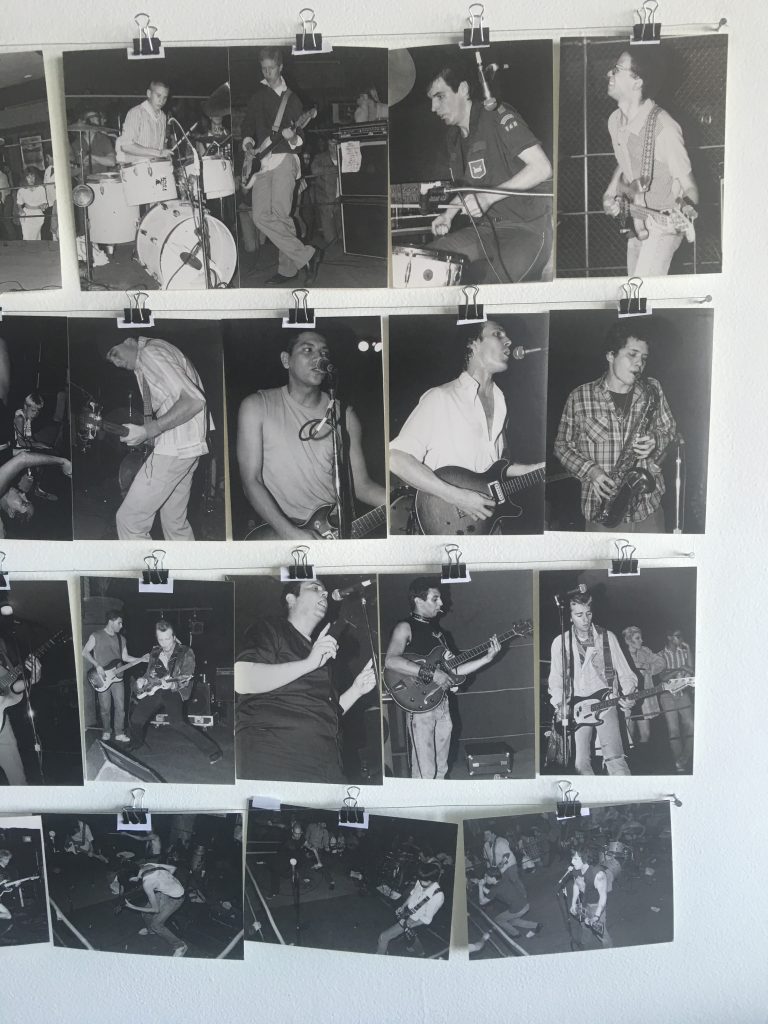 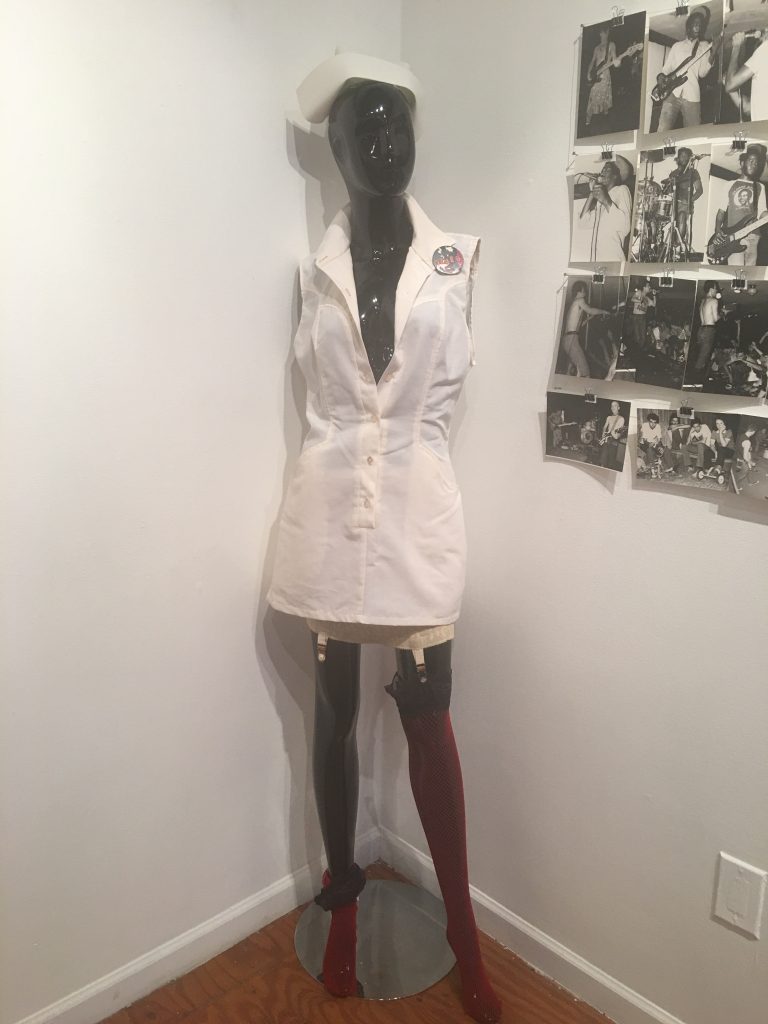 It poses an almost endless amount of questions. What was the Mad Garden like? Did its floors seem to warp and creak when there were too many people in there, the way the old Modified used to? Who are these people immortalized in photos and fliers? The guy with the bloody chest doing his best Iggy impression, the bewitching blonde doing the splits, the kid in the leopard print pajama suit chilling on the floor: What are their stories? What did they do? What happened to them? Are they in this room with me right me, admiring photos of their younger self? Or are they as dead as the places they used to play in? 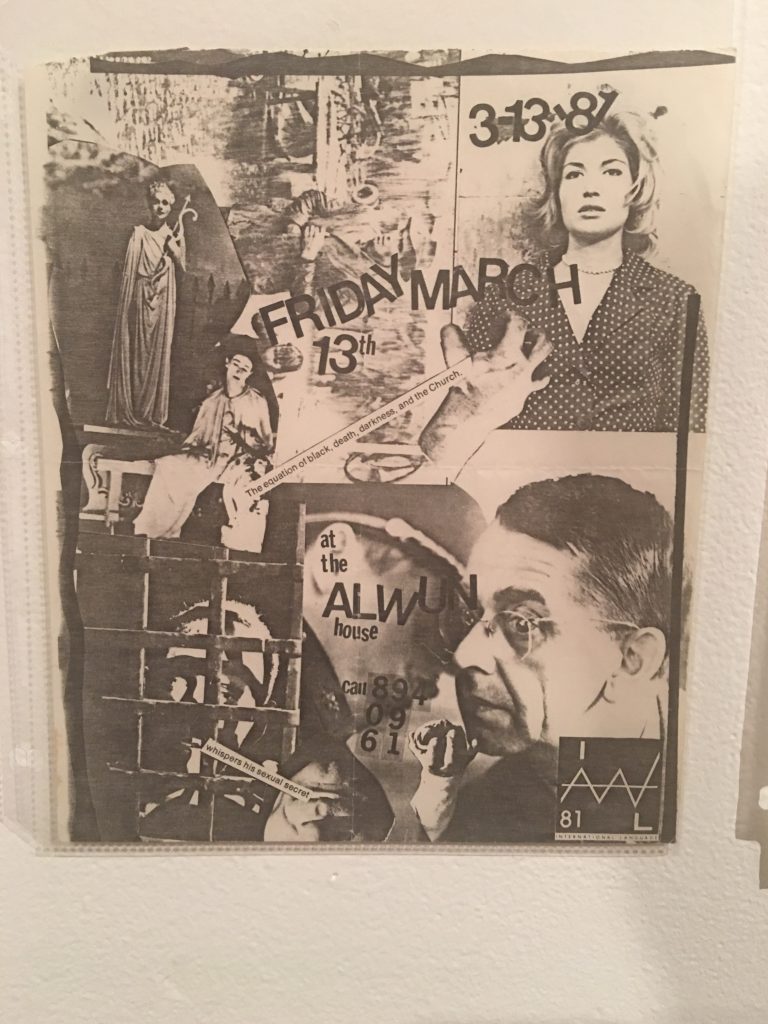 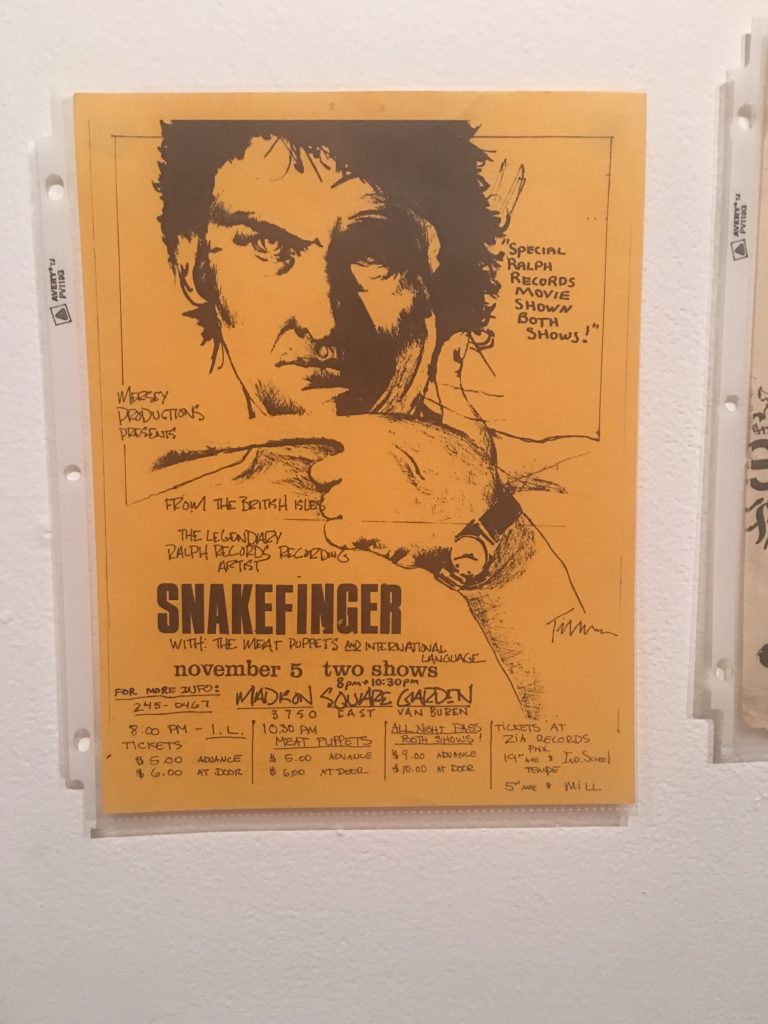 Not knowing who’s “important” and who “matters” in these photos is thrilling. If you were to do a similar exhibition for New York or L.A. punk, it’d be entirely different. You could look at pictures and go “There’s Stiv Bators, there’s Exene Cervenka, there’s Darby, there’s Dee Dee”- The legends, the legendary fuck-ups, the people who made the scene a Scene. But there’s no “Please Kill Me” or “We Got The Neutron Bomb” for Phoenix, no comprehensive scene history that tells us WHO to look out for in these pictures. Anybody could be important, or nobody.

Who’s the punk poet? Who’s the legendary groupie? Who’s the guy who vomited in David Lee Roth’s limo? Who made the scene, and who stayed on it? Who was passing through to bigger things, and who was always passing out? Who were the breakout stars, and who were the broken souls? Were they one and the same? I don’t know: I wasn’t there.

I’m sure there are some crusty old timers and seasoned veterans out there who could spell it all out for me. I’m sure there are some folks who were there, who could do guided tours through Modified Arts and answer every question I’d have, who’d reveal every secret I would hope to know. But I’m also sure that the price for that knowledge would have to be enduring yet another monologue from one of downtown’s elder statesmen about just how much better everything was back in the day, and I would rather dip my dick in honey and go fuck an anthill before having to hear that nostalgic deathtrip again. 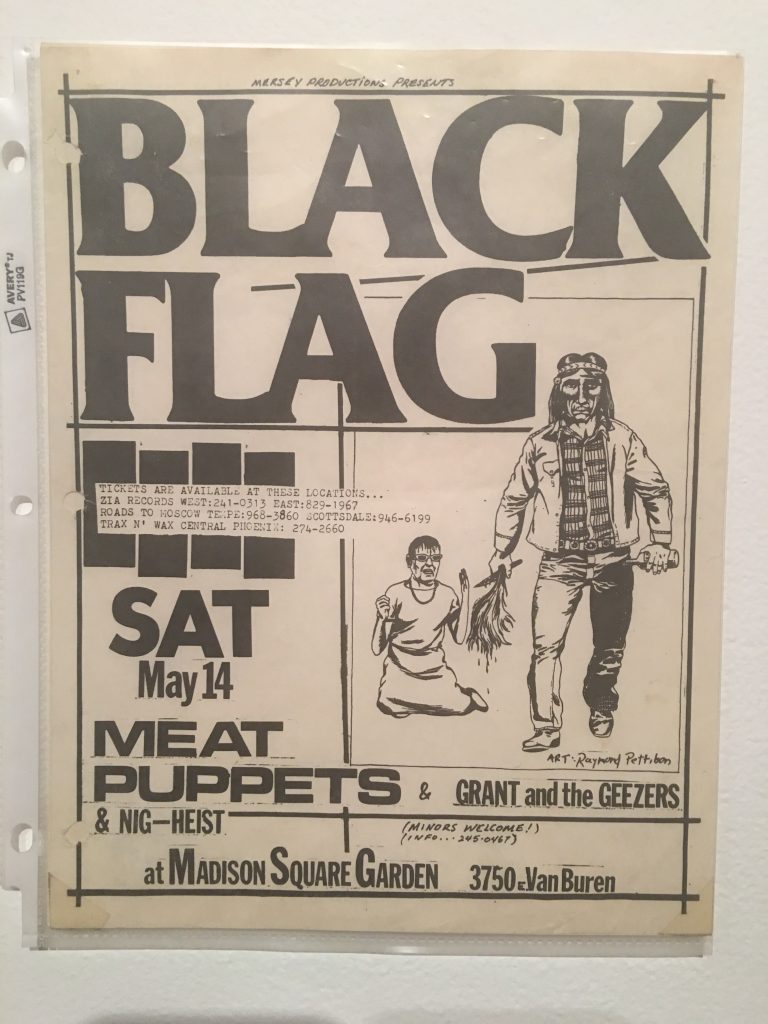 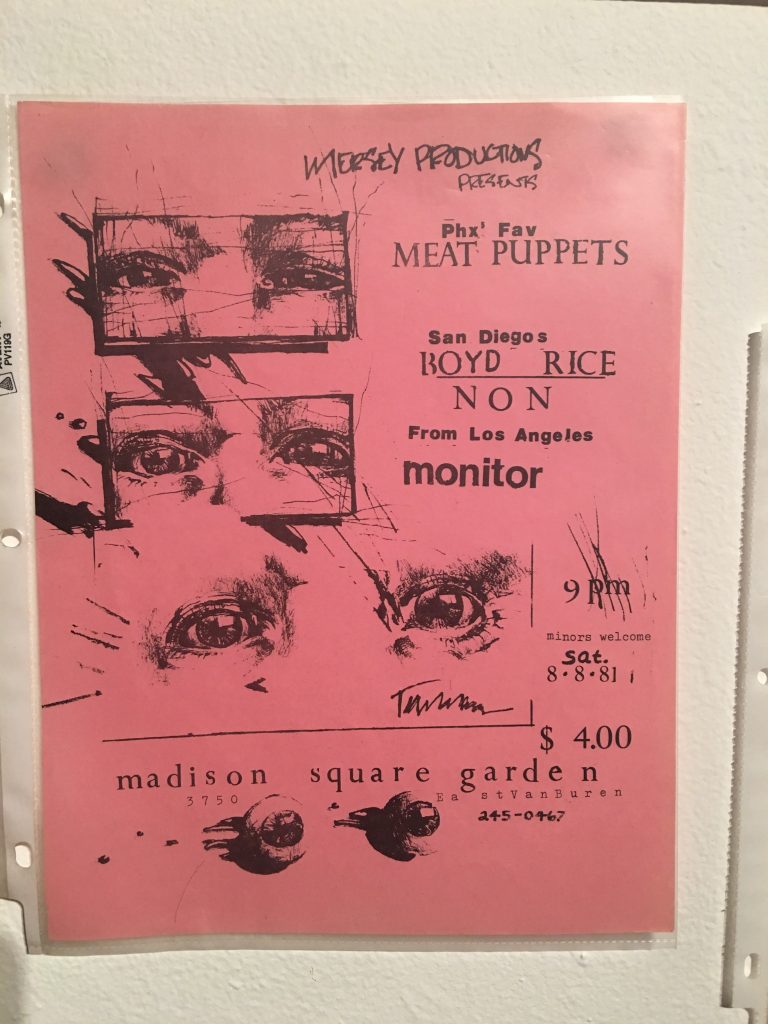 Going through an exhibition like this makes me wonder what our scene right now would look like, if it were to be commemorated in thirty years time. What would the last 10 years of downtown look like on a gallery wall? Would future generations be as mystified at names like The Trunk Space, Funny World, and The Firehouse as I am by the Mad Garden and Salty Dogs of yesterday? Would photographs of Dance Machine Dave Driscoll or the guy on the lightrail who’s always wearing chain-mail made out of soda can tabs inspire similar reveries of “Who’s THAT guy, and what’s his story?” Would old-timers be wandering through the gallery, talking fondly about the good old days at Conspire Open Mic, reminiscing about the first time they saw the bird get set on fire, grumbling about “the kids” and their Neo-Vapor-Trapwave music. “We had Andy Warpigs and Peachcake and Father’s Day: That was REAL music”, we’d say outside the venue, waiting for our self-piloting Uber hovercar to take us home. As high on nostalgia as Homer’s lotus eaters, and just as reluctant to kick the habit.

And somewhere behind us, back inside the gallery of tomorrow, people who weren’t there would look at our fliers, photographs, zines, shirts, records, and buttons and they would have the same experience that we’d have going through “You Weren’t There” in 2016. They would know that there were giants in the earth in those days; Here are their footprints.

You can see the gallery from now until Oct. 15 only at Modified Arts
(407 E Roosevelt St, Phoenix, Arizona 85004). Here’s a Facechoke event page.